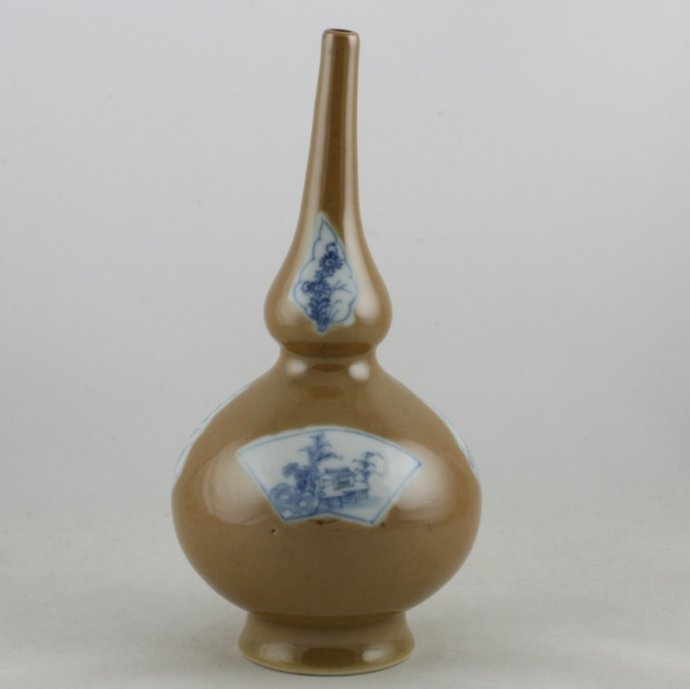 The shape draws on Persian metalwork designs from the 16th and 17th centuries. Fragrant rosewater (gulaul) was used for refreshment, cleaning and scenting at both religious and secular events in the Islamic world. In Western settlements all over Asia they were widely-used as well. (Düsseldorf 2015, p.276)

Rose water sprinklers, known as gulabpash, have been used in India since the Mughal period for the purpose of refreshing oneself by moistening one's face, washing hands after a meal or for sprinkling a visitor as a gesture of welcome. Dutch traders discovered them in India and subsequently ordered porcelain bottles in various designs to be made in China. These bottles were partly sold in the Ottoman Empire, where local silversmiths fashioned artistic stoppers for them. Today, rose water bottles are found in the Sultan's Collection in Istanbul as well as in some Dutch museums, for example the Princessehof in Leeuwarden or the Museum Boijmans van Beuningen. (Suebsman 2019, p.74)

Perfumation and thurification have a very long history and can be traced back to prehistoric times. For thurification various types of incense burners were and are used until this day. For perfumation, rose-water was used that was stored and applied in specially made sprinklers. (META-Museum: Chinese Export Silver for the Islamic World, (A. von Ferscht, www.chinese-export-silver.com))

Rosewater sprinklers were are known to be decorated in underglaze blue, in 'Red & Gold' or 'Rouge de Fer' , or the body was (partly) covered in powder blue, Batavia brown or some other monochrome colour. At first they were only exported and used as such in Batavia later on in the West they were often fitted with metal or silver mounts. In the Netherlands they served as curiosities and decorative items. (Jörg & Van Campen 1997, p136) 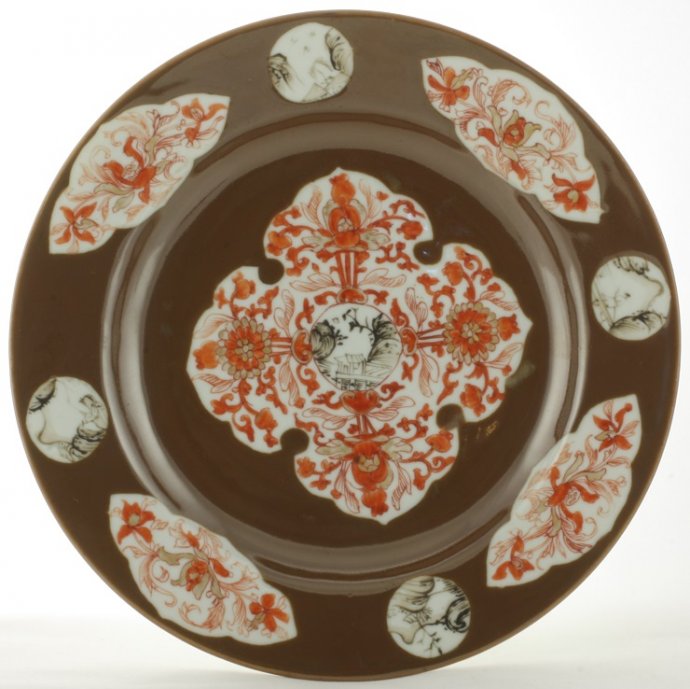 Dish on a footring with a glazed base and a flattened rim. Batavia Brown covered with underglaze light brown. Decorated in 'Red & Gold' / 'Rouge-de-fer' with encre de Chine and gold on the glaze. In the centre a reserved four pointed scalloped cartouche, a central roundel is decorated with a riverscape with a pavilion, rocky banks and trees, the roundel is surrounded by flowering peony plants alternating with flowering chrysanthemum plants. The scalloped reserves on the rim are filled with flowering peony plants alternating with reserved roundels, filled with riverscapes. The reverse is undecorated.

The combination of an object covered in Batavia Brown with 'Red & Gold' / 'Rouge-de-fer' and encre de Chine and gold on the glaze is unusual and rare.

For an identically shaped and decorated dish, please see:

Condition: A firing flaw to the exterior wall and a fleabite to the rim.. 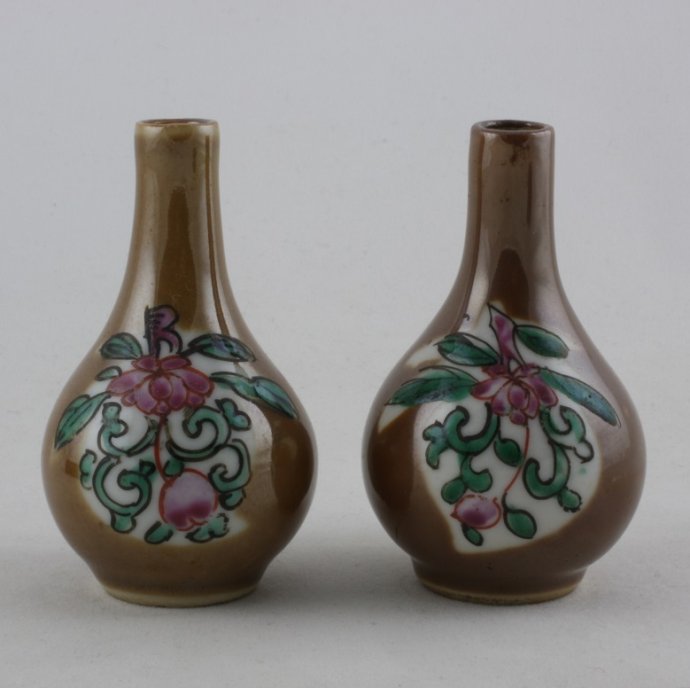 A pair of pear-shaped miniature 'doll's house' vases on a flat unglazed base. Covered with an even underglaze dark brown. Decorated in overglaze green, pink and black enamel with flowerheads and scrolls in two leaf-shaped panels. 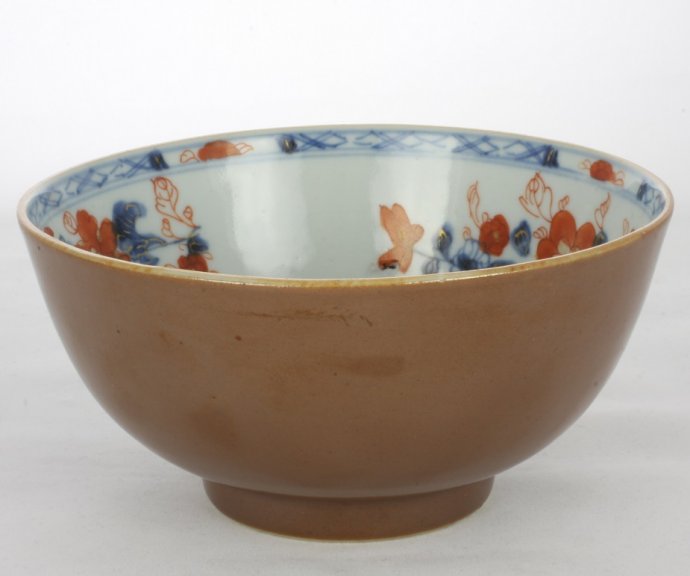 Batavia brown was very popular in the Netherlands and the Dutch East Indies. On this bowl the Batavia brown decoration method is combined with the popular Chinese Imari decorating style. (Jörg & Van Campen 1997, p.137)

This vase probably had an Indonesian provenance and was collected by a (former) owner when he or she lived in the Dutch East Indies. The mount, enhancing the shape, indicate the value such pieces had in local Indonesian communities, where they were often regarded as pusaka, holy and venerated heirlooms. (Jörg 2003/1, p.65) 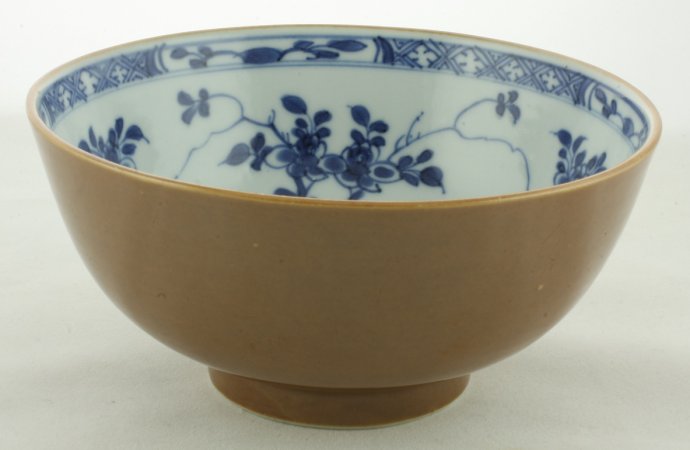 Bowl on a footring with a glazed base and a straight rim. The outside is covered with so-called Batavia-Brown, underglaze dark brown. Decorated in underglaze blue on the bottom with a single flowering peony encircled by a single, concentric band and on the sides two flowering plants. Around the rim a trellis pattern border with four reserves filled with a flower spray.

On this bowl the Batavia Brown decoration method is combined only with an underglaze blue decorating style.