On this page you'll find my latest acquisitions, It may, however, take some time for all objects to load.

After four weeks each object in 'Recent Acquisitions' will be moved to their specific category.

Dish on footring, flat octagonal underglaze brown-edged rim (jia mangkou). Decorated in underglaze blue after a Delft tile with an unusual (Dutch) building, a large tree and two dogs on a river shore. The sides are undecorated. On the rim a continuous flower scroll. The reverse is undecorated.

Howard states that the influence of other ceramics on Chinese Export porcelain increased after 1740. Silver and sometimes turned wood, European shapes had been copied from the late 17th Century onwards. In this case it is clear that a Delft tile very similar to the one illustrated was taken to China as a pattern. The Chinese copied the unusual building, the tree behind, (on this version the Dutch figure has been replaced by two dogs) and the railings leading down to the shore - but they added their own river shore on the other bank and left out the sampan in between to 'balance' the scene. Such new ideas in the trade, where British merchants were concerned, usually developed from the Private Trade. The Dutch, on the other hand, were more adventurous with special designs for large company orders, although these frequently proved expensive". (Howard 1997, p. 59)

For an similarly decorated dish with the Dutch figure and the sampan, please see:

Condition: Some firing flaws and three tiny fleabites to the rim.

Tea bowl on footring, slightly everted rim. Decorated in various overglaze enamels, iron-red, black and gold with a coat of arms surrounded by four large and four small flower sprays in European style. Round the rim a chain-pattern border. On the base an old handwritten collectors number 1018 in black ink.

The coat of arms show: on a gold background a red arched bend; the crest a gold coronet with above an eagle's claw upside down. The mantling comprises scrolling leaves in red and grisaille. These are the arms of "Van der Burch" from Delft and other major Dutch cities. The "Van der Burch" family is a very ancient one with its genealogy reaching back to the mid-14th century.

This tea bowl was part of a tea service that can be dated to the mid-1760s. At least seven people could have commissioned it, however the most likely is Frans Jansz. van der Burch (1718-1775). He was the city councillor of Delft from 1748 and he became director of the Dutch East India Company, (Vereenigde Oost-Indische Compagnie, VOC) in 1765. This event in particular might have induced him to order both a dinner and tea service with his family arms. Kroes mentions that of this dinner service only an oval dinner platter is known and from the tea service only a tea caddy without cover is known. (Kroes 2007, p.363 & p.453)

In the collection of the Groninger Museum is a metal tobacco box made in Japan in the mid-18th century, with the same coat of arms of the Van der Burch family and an inscription: "FRANC(O) REYERSZ VANDER BURCH". In literature the word Franc(o) has been wrongly interpreted as "Sibrant", please see the following two pictures. 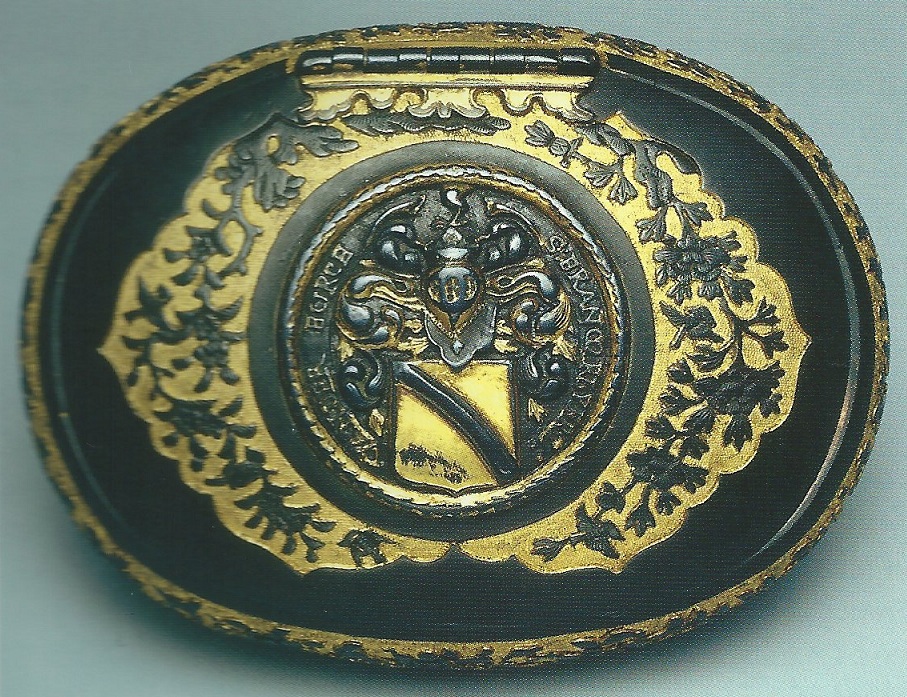 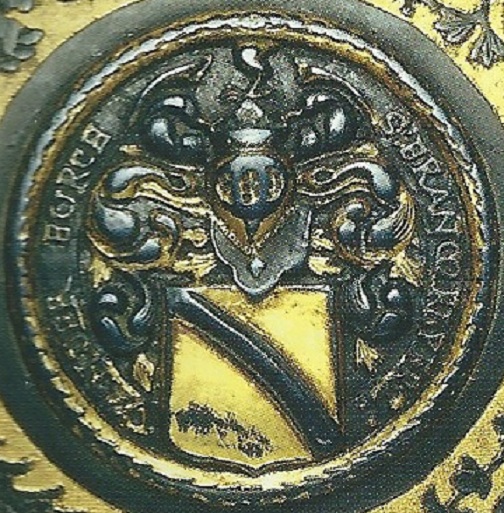 Both images reproduced from: Chinese Armorial Porcelain for the Dutch Market, Chinese Porcelain with Coats of Arms of Dutch Families, (J. Kroes, Waanders Publishers, Zwolle, 2007), p.363, cat.no. 281b. (copyright in bibliographic data and cover images is held by the publisher or by their respective licensors: all rights reserved)

For an identically shaped, sized and decorated tea bowl and cover that was donated by me in 2012 to the collection of Oriental ceramics of the Groninger Museum, please see: 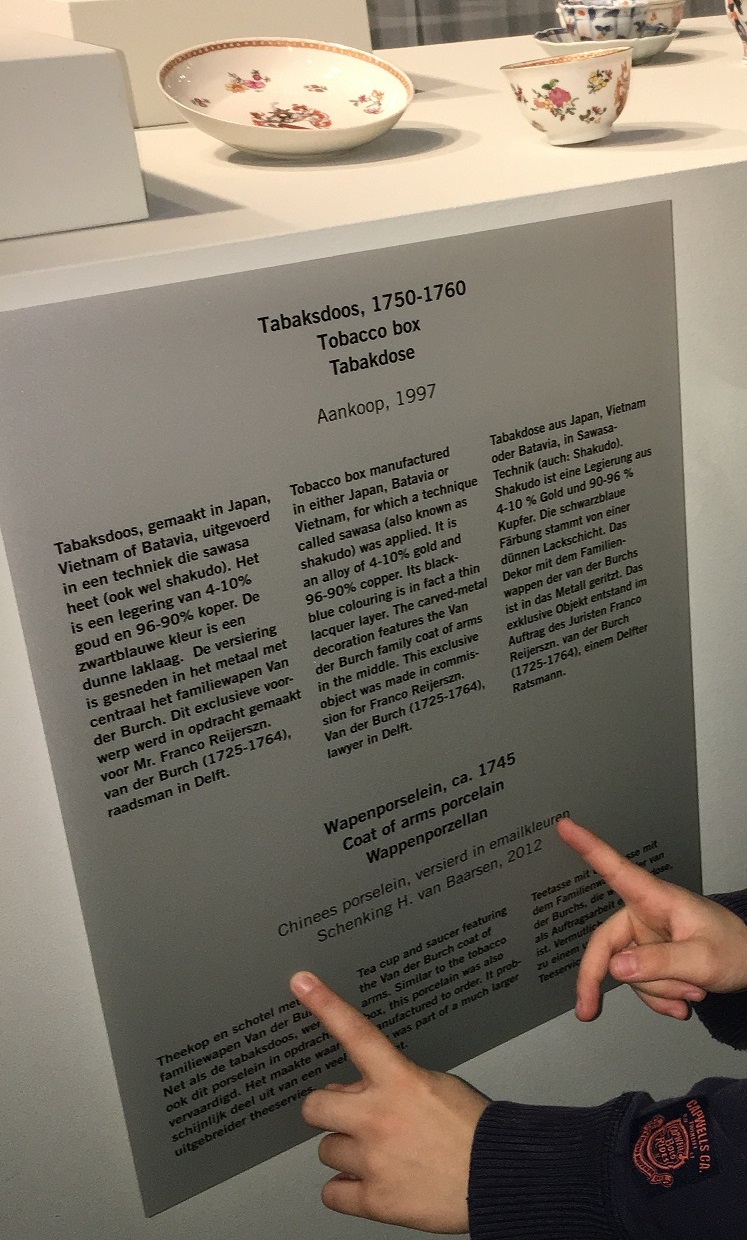 For an oval platter and a tea-caddy, with identically armorial design, please see:

For the metal tobacco box in the collection of the Groninger Museum made in Japan in the mid-18th century, with the same coat of arms of the Van der Burch family and an inscription: "FRANC(O) REYERSZ VANDER BURCH", please see:

Condition: A short hairline to the rim.

On this dish the porcelain painter applied the principle of distributing the pattern over the whole surface, leaving significant space without ornamentation. The pattern did not have to be symmetrical, therefore, and the main scene spreads onto the edge, giving the impression of a section of real scenery. On the right side of the dish we see a distinctive rock with a climbing peony in blossom, which is complemented with additional auspicious symbols - a fungus of immortality, a narcissus spray and a cicada. a symbol of the circle of rebirth, moral purity and a noble character. Placed in opposition to the rock design is an island landscape with another symbol of longevity - a pair of cranes by a rock, chrysanthemum and bamboo.

The detailed pattern adopts the painterly genre of flowers and birds and transposes it skilfully to the porcelain surface. In the Qianlong era, when Chinese porcelain for export to Europe sought new ornamental designs, similarly detailed wares were relatively common and we find them in number of European collections. The services really served as everyday wares, which often is evidence by the worn condition of the preserved pieces. In the present case, too, the dish originally formed part of a larger porcelain service, of which only a fragment has been preserved in the Hradec nad Moravici collection. (Suchomel 2015, p.435)

Condition: Some firing flaws to the base, a frit, three chips, a glaze rough spot and a hairline all to the rim.

Circular box and cover on a flat unglazed base with some adhering kiln-grit to the base. Decorated in famille verte type enamels and iron-red with a leafy flower spray in a double concentric band. The box is undecorated.

It is difficult to identify enamelled porcelain made in the second half of the 17th century for the inter-Asian markets, i.e., the Indonesian archipelago, the Philippines, Vietnam, Cambodia, Malaysia, Burma and the east coast of India. Written documentation is largely absent and the few Chinese references do not specify shapes and decorations. For underglaze-blue wares we have the Vung Tau wreck of c.1690, but that cargo included no enamelled wares. More information will hopefully come from other systematically salvaged shipwrecks. Meanwhile the literature does not help much either and this subject is rarely broached. Nevertheless, the market must have been substantial in particular after the 1640s when overseas trade and shipments of wares from the kilns in Jingdezhen and in Fujian became irregular due to the civil wars in China. Japanese porcelain shipped by the Dutch and the Chinese, or Vietnamese porcelain may have partly filled the gaps but quantities may not have been substantial enough.

Apart from Jingdezhen porcelain, it was the so-called Swatow or Zhangzhou ware from several local kilns in Fujian that had largely met the demand in south-east Asia.

In 1675 the kilns in Jingdezhen were destroyed and this was a demarcation line in production, marking the end of the extended 'transitional' period and the beginning of a new era, New types were developed for the internal market as well as for export, including wares for the south-east Asian Markets. The new enamel combinations (yellow, red, green) although often harking back to the Shunzhi period, justify the inclusion of these wares in the famille verte context.

A significant number of these inter-Asian market wares have been preserved in the Netherlands , mostly with an Indonesian provenance. They were taken home by retiring Dutchmen after serving in the former Dutch Indies, or collected in situ by people like Reinier Verbeek. In particular the Princessehof Museum in Leeuwarden and the Groninger Museum have a good selection of these wares. (Jörg 2011/2, p.27)

The exact purpose of these circular covered boxes is unclear, but in their pristine glazed condition they were attractive evidence of the delicacy of eastern porcelain, and merchants probably had little difficulty in selling them in Europe for patches, pills and other uses. (Howard 1994, pp.220-221)

Condition: Two chips and a frit to the inner rim of the box.

Pear-shaped teapot on footring. Straight spout with a curved C-shaped handle. The inlaying flat cover with pointed knob. The broken handle handle is fitted with unmarked silver mounts as repair. Decorated in various overglaze, famille rose, enamels on both sides with flowering peony and chrysanthemum sprays. Round the mouthrim reserves filled with half flower heads on a famille rose diaper pattern ground. The cover is decorated en suite. On the inside of the cover an old rectangular jagged paper collectors label with the pencil handwritten number '61'.

There was great demand for Chinese porcelain in Europe at the end of the 17th century. This led to the production of a variety of shapes and decorations while the competition between private merchants also contributed to a very varied supply. Besides porcelain decorated in underglaze blue, famille verte and Chinese Imari, many other types emerged, decorated with overglaze enamels that were sometimes combined with underglaze blue. The most important development, however, was the use of a pink-red enamel around 1725. Porcelain decorated with this enamel is called famille rose. Within a very short time this type supplanted famille verte and became the popular choice for all kinds of export porcelain. Mixing the rose with white enamel created shades of colour that suggested depth and volume. Famille rose knows a great variety in quality and decorations. The name was invented in the 19th century; before that it was simply called 'enameled'. Rose enamel was first developed in the Imperial workshops in Beijing and applied on enameled copper and bronze objects. Western chemical knowledge introduced by the Jesuits at the court around 1700 probably played a role. Since c.1725 it also was used on porcelain in Jingdezhen. Initially, the colour had a lilac shade but became a proper pink after c.1730. It was applied rather thickly and, unlike the very thin iron-red, can easily be felt on top of the glaze. Rose was applied on all types of export porcelain and there are countless combinations with other enamels.

The most important evidence on the early use of famille rose on porcelain comes from the armorial wares, which can often be dated to within a few years. There are about three thousand armorials known, but among them there are only a few with famille rose decoration that can be dated earlier than 1730. The earliest and most important of these is that of Sir John Lambert, who was a Director of the Honourable East India Company and of the notorious South Seas Company. He was made a baronet in 1711 and died in 1722. We can say with fair certainty that the service with his arms was made not later than 1722. (Garner 1967-69, pp.10-11)