If you are interested in a purchase, or want more information on one of the objects, please feel free to contact me at: patergratiaorientalart@hotmail.com. 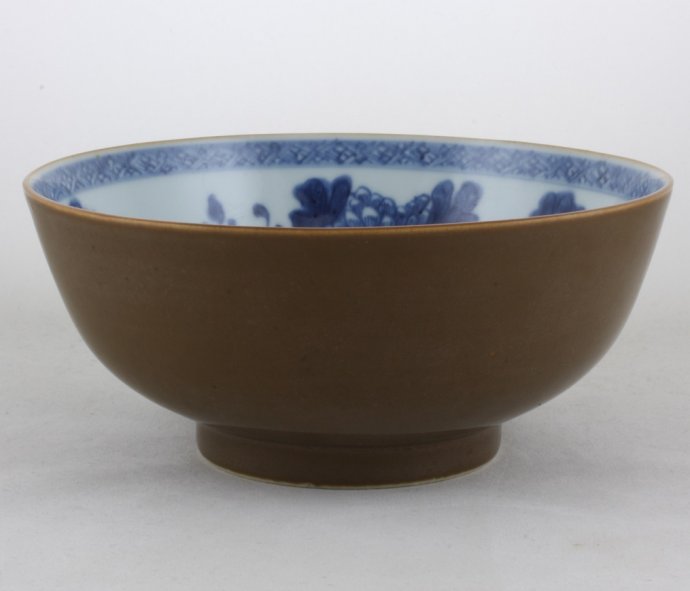 Bowl on footring, straight rim. The exterior is covered with so-called Batavia-Brown, underglaze dark brown. The inside is decorated in underglaze blue with the 'Batavian' floral pattern, small size. On the bottom a single flowering peony and on the interior wall two large peony sprays and a chrysanthemum spray. On the rim a trellis pattern border.  On the base the original Christie's lot 2546 label and the Christie's The Nanking Cargo sale label proving it has been one of 24 similar bowls sold in lot 2546. (Amsterdam 1986. p.101)

On Monday January 3, 1752, the Dutch East India Company, (Vereenigde Oost-Indische Compagnie, VOC) vessel Geldermalsen, struck a reef on her return journey to the Netherlands and sank in the South China Sea. Of the crew 32 survived and 80 went down with the ship and her cargo of tea, raw silk, textiles, dried wares, groceries, lacquer and porcelain.

The cargo of Chinese porcelain was originally potted in Jingdezhen, Jiangzi province then shipped to Nanking for delivery to the Dutch East India Company, (Vereenigde Oost-Indische Compagnie, VOC) vessel Geldermalsen for final transportation to the Netherlands. The Geldermalsen struck a reef on her return journey to the Netherlands and sank in the South China Sea on January 3, 1752. The cargo was recovered by Captain Michael Hatcher and his team in 1985 and sold by Christie's Amsterdam on 28 April - 2 May 1985 as 'The Nanking Cargo. Chinese Export Porcelain and Gold' two hundred and thirty five years later. (Jörg 1986/1. pp.39-59).

An interesting detail is that Captain Michael Hatcher found the wreck of the Geldermalsen on the same reef as he earlier, in 1983, found the wreck of a Chinese junk. both wrecks were about a mile apart. This Chinese Junk wreck came to be known as "The Hatcher Junk" she had a cargo of Kraak and Transitional porcelain objects that were dated c.1643. (Sheaf & Kilburn 1988, p.27)

The variety of bowls in the 18th century is extremely great. They were used for an infinite variety of purposes. In the records these bowls are found under the heading 'slop bowls' and that is what they were used for: the tea cup was rinsed in them before a different kind of tea was poured in. The Geldermalsen carried 25,921 bowls, Hatcher found nearly 17,000 undamaged. The group with dark-brown glaze on the outside - the so-called Batavia ware - of which the inside is decorated in underglaze blue-and white only came in two designs: with flowers (like this bowl) or a river landscape. (Jörg 1986/1, p.89)

Howard states that the small bowl is also decorated inside in underglaze blue, the outside having a cafe-au-lait brown glaze. Such a combination favoured in Batavia and Holland, and known today as 'Batavia ware'. (Howard 1997, p.29)

Condition: A fleabite to the rim and two firing tension hairlines.

Bowl on footring with spreading sides a straight rim and a partially glazed base. Decorated with freely painted circular patches of green enamel. The enamels have deteriorated due to the long immersion in the sea, leaving  nothing but a few traces of green. On the bowl the original Christie's 'Vung Tau Cargo' sale labels proving it has been one of 100 bowls sold in lot 1001. (Amsterdam 1992, p.132)

These 'provincial' wares formed the bulk of the shipment of southern wares and were originally sold as food bowls, they received minimum care when stowed: piled on top of each other and crammed under

Condition: A chip with a connected hairline to the rim. 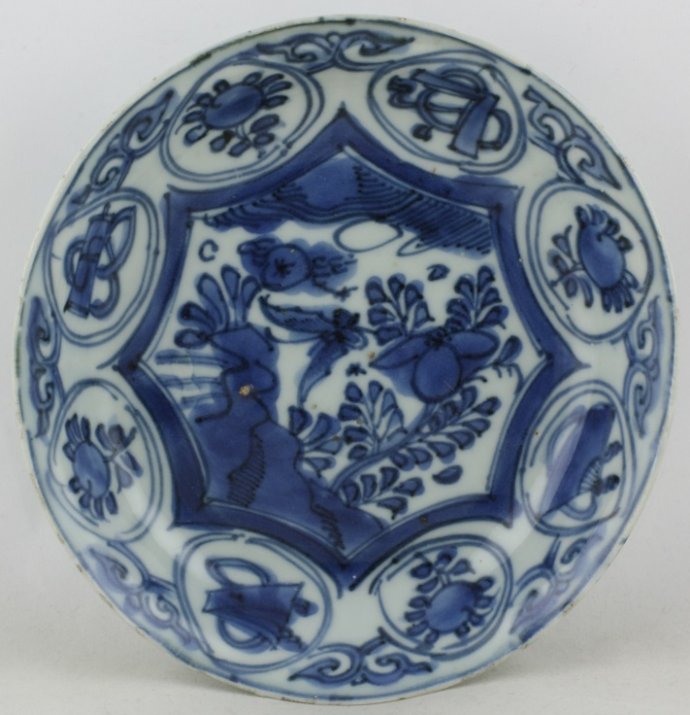 Small dish on footring, everted and scalloped rim. Some kiln sand adhering to the footring. The meisande, or petalled, style decoration in underglaze blue with a butterfly in flight in a marshy landscape encircled by an eight-pointed scalloped medallion. On the sides and rim eight round, or onion shaped, medallions, decorated with peaches and auspicious symbols, in between each medallion a single looped bow. On the reverse seven broad panels filled with five dots.

According to Rinaldi this dish can be classified as a border VIII dish. In Border VIII dishes rims are always straight with a slightly flared and foliated edge. The panels on the gently curved cavetto are transformed into round or drop-shaped medallions. These are separated from the usual eight-pointed centre medallion by thickly drawn brackets. Dishes of this type are usually small (from 13 to 20 cm in diameter). Auspicious symbols have become the most common decoration in the centre medallions, but floral motifs or animal appear as well. The grasshopper emerges as a favourite decoration. The underside is divided into sections by a single line bifurcated near the footrim. Each section contains stylized symbols or jewels and dots. (Rinaldi 1989, pp.109-111)

Condition: Crooked shaped and some firing flaws, caused by the firing process. Some shallow glaze rough spots and a shallow frit to the rim. Some spots with scratches to the glaze. 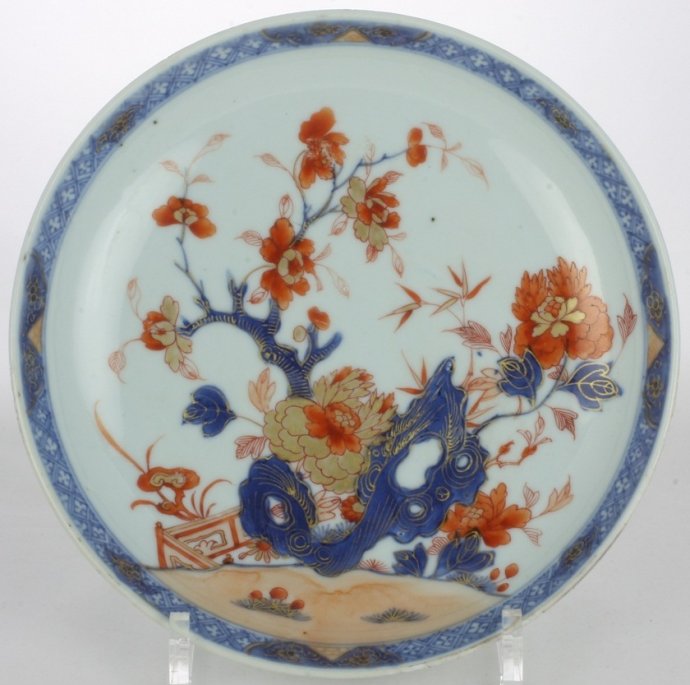 Dish on footring, straight rim. Chinese Imari, decorated in underglaze blue, overglaze iron-red and gold with a flowering peony and bamboo tree growing from pierced rockwork near a fence. On the rim a diaper pattern border with eight reserves four filled with a single flower and four with a double flower. The reverse is undecorated.

Condition: A chip, three fleabites and some rough spots to the rim.