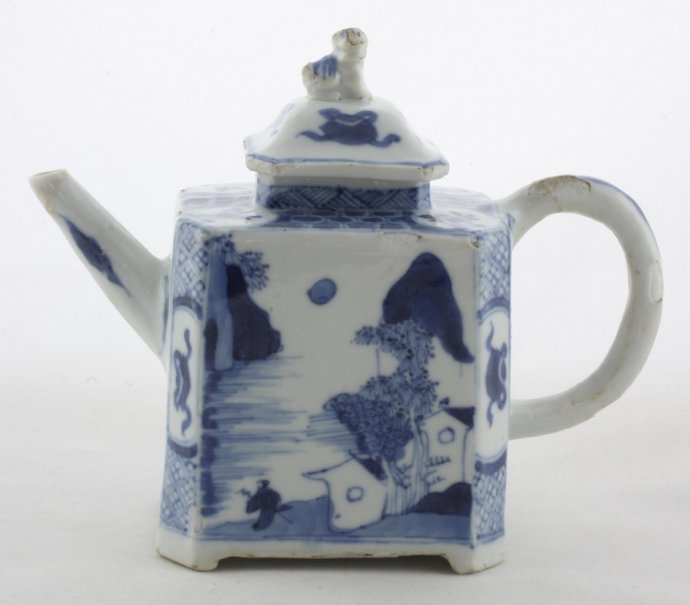 Teapot of rectangular form with canted corners. Four flat feet at the corners. A flat shoulder and a short upright neck. Original cover with an animal shaped knob. Straight spout an a C-shaped handle. Decorated in underglaze blue. Of the eight vertical panels two are filled with a figure in a riverscape with houses, trees, mountains and the sun, two other panels are filled with flowering branches and insects in flight. On four panels a single cartouche filled with antiquities, reserved on a trellis pattern ground. On the shoulder in each corner a cartouche filled with a single flower reserved on a honey comb pattern. Round the neck a zig-zag lines pattern border. On the handle and spout florets between scrolls. On the cover four antiquities, the knob shaped in the form of an animal, most likely a lion.

Condition: A restored neck and a restored chip to the underside of the cover. A firing crack to the handle. Glaze loss spots to various spots on corners and edges of the teapot and cover. 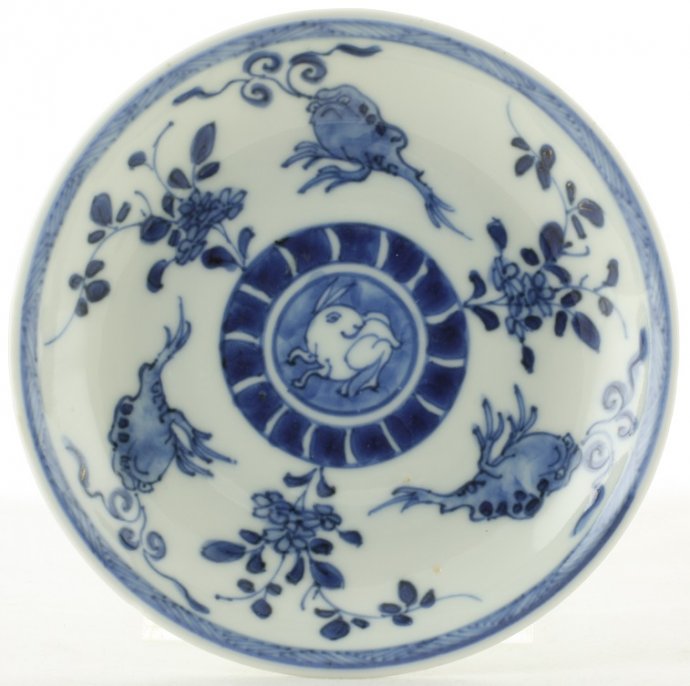 The three legged toad, Jin Chan, 金 蟾, literally "Golden Toad", is most commonly translated as "Money Toad" or "Money Frog". This mythical creature is said to appear during the full moon, near houses or businesses that will soon receive good news (most of the time, the nature of this good news is understood to be wealth-related). According to one Chinese legend, the Jin Chan was the greedy wife of one of the Eight Immortals, who was transformed into a toad as punishment for stealing the Peaches of Immortality. The Jin Chan is usually depicted as a bullfrog with red eyes, flared nostrils and only one hind leg (for a total of three legs) and is often shown in the company of the Immortal Liu Hai (刘 海). Both Hare and Toad are ‘semi immortal’ animals, the Hare relating to a story for a fairly lady in the moon (Chang O) and the toad (Jin Chan) relates to the immortal Liu Hai. Note the ‘air/breath’ Jin Chan breaths out indicating a mythical magic or blessing work in action. (wikipedia / S.Fan)

In Daoist mythology the three-legged toad is said to live on the moon, which it swallows during an eclipse, this making it a symbol of the unattainable. (Jörg & Van Campen 1997, p.106, cat. 100)

The hare is the symbol of longevity, fotr it is believed to grind, on the moon, the ingredients of the elixir of longevity. The toad is the symbol of the unattainable. Evoked to obtain wealth. Symbol of Spring, of fertilising rain and luck. (Pinto de Matos 1996, p.275 & p.279)

A decoration of a hare and frogs on tea wares, may have been met with amazement by Westerners, who would have considered the combination hare with frogs and tea as weird. (Jörg 2011/2, p.131)

Condition: Some fleabites and a shallow glaze chip to the rim and some chips to the inner footring. 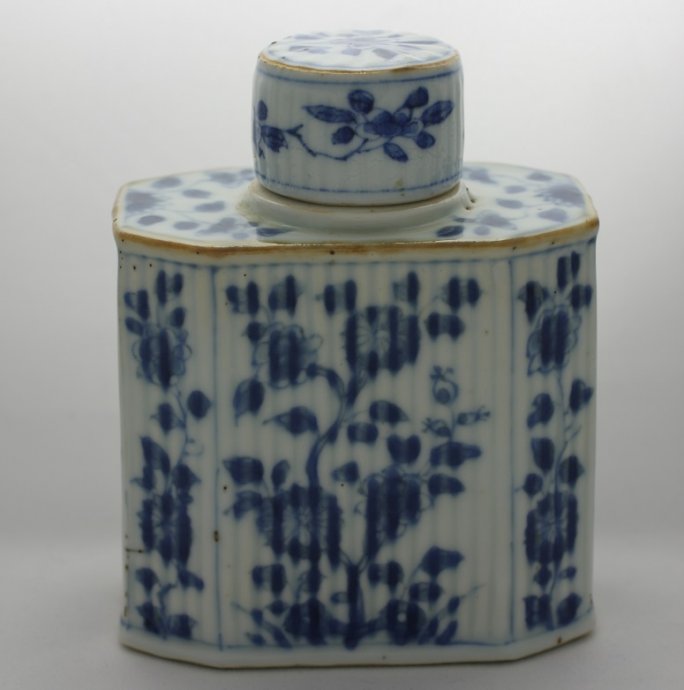 Tea caddy of rectangular form with canted corners, a ribbed body on a flat unglazed base. On the flat top an unglazed cylindrical mouth with a lid fitting (original) cover. The tea-caddy and cover with underglaze brown-edged rims (jia mangkou). Decorated in underglaze blue. On the ribbed body and shoulder an overall decoration of flowering plants growing from rockwork. On the sides of the cover flower sprays and on top a single flowering stem.

Condition: Very tiny glaze rough spots to the ribbing of the tea-caddy and to the rim of the cover. 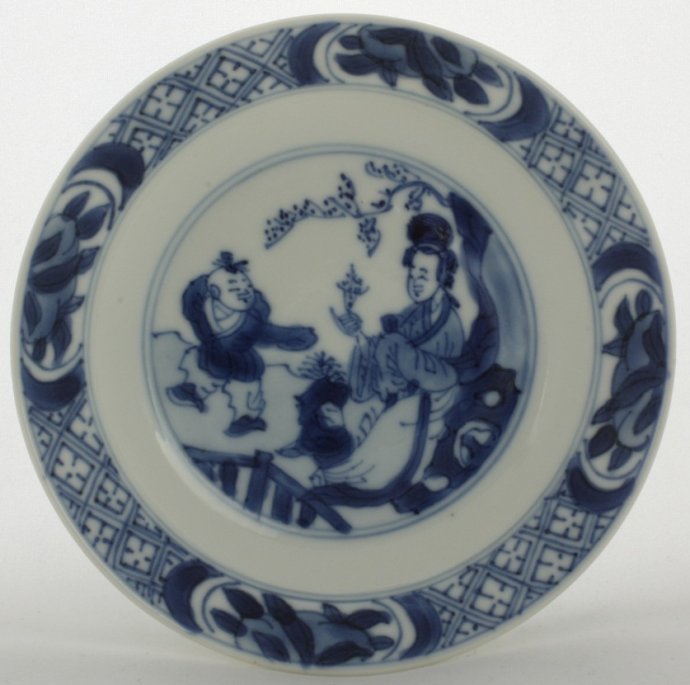 Saucer on a footring with a flat rim. Decorated in underglaze blue with a 'Long Eliza' figure siiting on pierced rockwork under a tree in a fenced garden holding a branch while looking a little dancing boy. On the flattened rim a trellis pattern border with four cartouches filled with flower heads. On the reverse four of the Eight Precious Objects. Marked on the base with the four-character mark featuring Zhi: Cheng hua nian zhi, (Made during the Chenghua reign (1465-1487)), in a double circle, underglaze blue 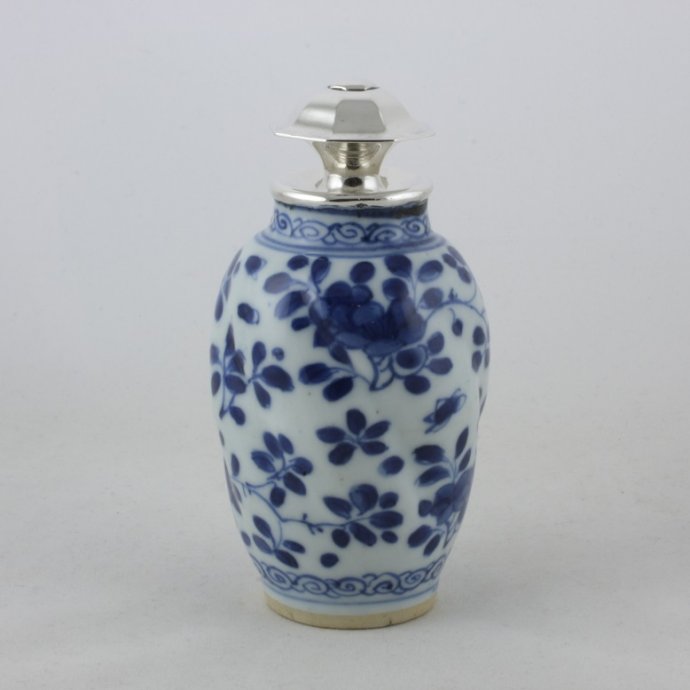 Vase (converted into a tea caddy)

A spirally moulded ovoid vase on footring. Fitted with Dutch silver mounts (marked) converting it into a tea caddy. Decorated in underglaze blue with a continuous decoration of flowering branches and insects in flight. Around the neck and foot a spiral pattern border. The silver marks explained: the makers mark, a star topped with the initial 'V' for the maker Jacobus van Vorst (1816-?), active as a silversmith in Rotterdam (1840-1865). The sword mark was used (1814-1905) as the standard mark on articles too small for the full hallmarking.

For a similarly shaped, sized and decorated vase, please see: 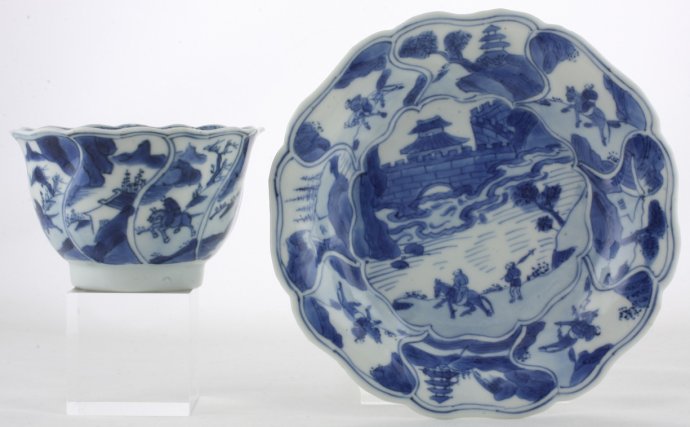 Teacup and saucer on footrings with curving spirally rims fluted in eight lobes. Decorated in underglaze blue with a scholar on horseback riding through a river landscape, an attendant walking behind walking behind holding a parasol. A fortress with a brick wall in the background. On the sides and rim radiating panels with a scholar on horseback alternating with a pagoda in a landscape. On the reverse eight flower sprays. Marked on the base with the symbol mark: Flower, the symbol for purity in a double circle, underglaze blue. The teacup is decorated en suite.

Condition saucer: Three fleabites, three frits and a hairline to the rim.

Not illustrated, object 2010952, another identically, shaped, sized and decorated, sold teacup and saucer.

Not illustrated, object 2010953, another identically, shaped, sized and decorated, sold teacup and saucer.

Not illustrated, object 2010954, another identically, shaped, sized and decorated, sold teacup and saucer. 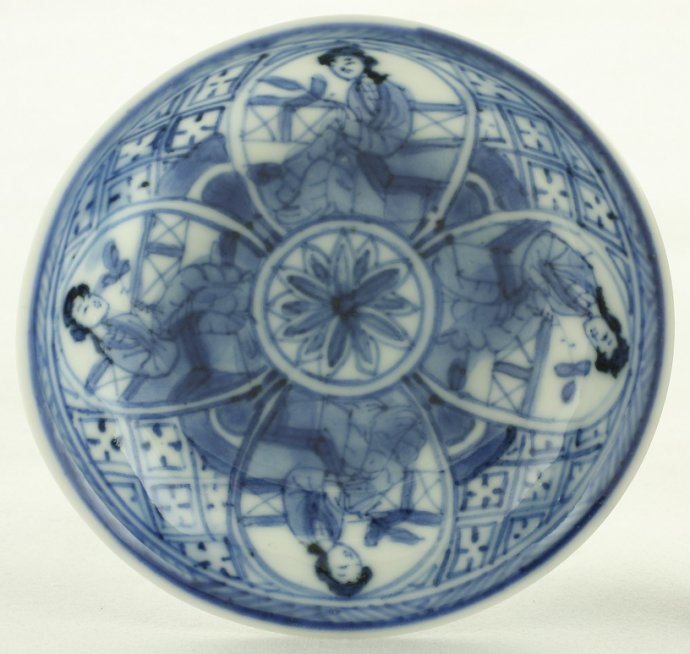 Saucer on footring. Decorated in underglaze blue with a chrysanthemum flower head in a central roundel. On the sides cartouches filled with a sitting "Long Eliza" figure alternating with and a diaper pattern. Around the rim zig-zag lines pattern border. On the reverse antiquities. Marked on the base with the single character mark: Qiu, (Autumn, harvest time, (Qing)), in a double circle, underglaze blue. 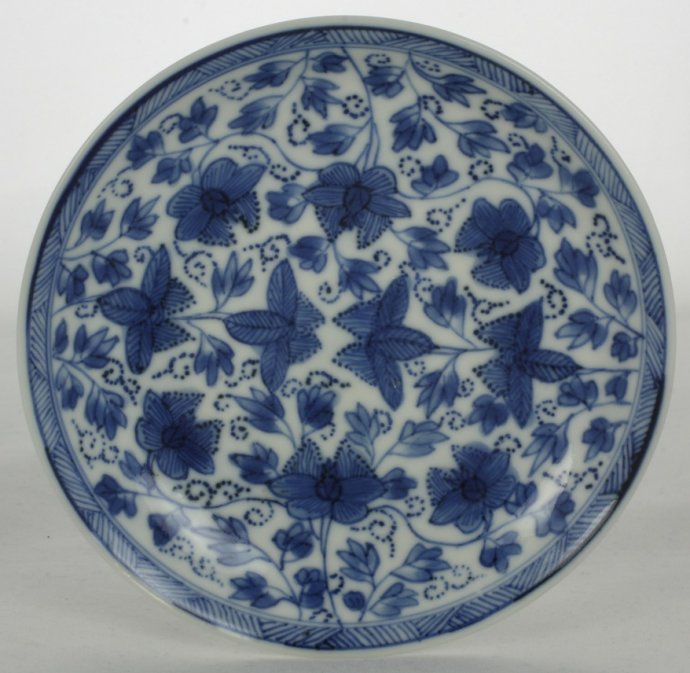 Saucer on footring, slightly everted rim. Decorated in underglaze blue with scrolls of branches and flowering stems. Around rim a zig-zag lines pattern border. the reverse with three flower sprays. Marked on the base with the symbol mark: 'Lotus', symbol of purity and one of the eight Buddhist Emblems, in a double circle, underglaze blue.

Identically decorated saucers, cups and covers were found in the cargo of the Vung Tau Wreck, please see; 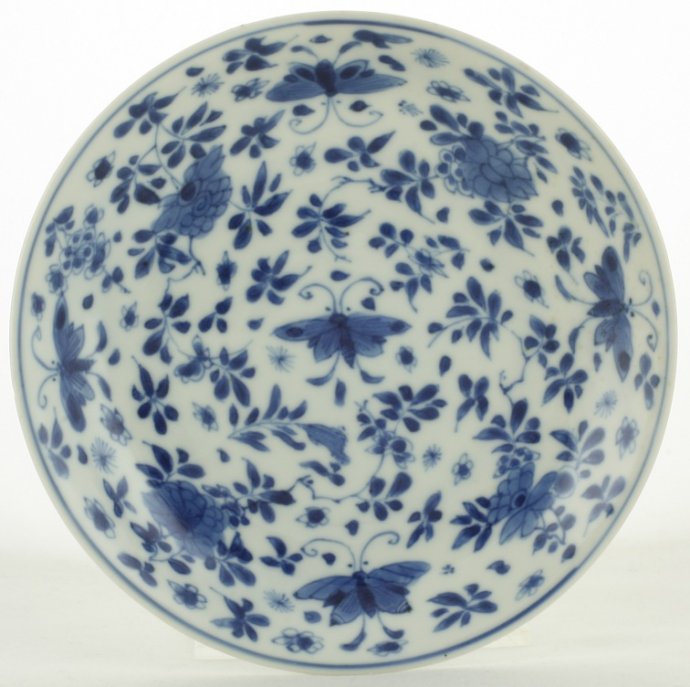 Saucer on footring, slightly everted rim. Decorated in underglaze blue with five butterflies flying in between flowering peony branches with scrolls of leafy flowering stems. Around the rim a zig-zag lines pattern border. On the reverse two flower sprays. Marked on the base with the symbol mark: Moon hare, symbol of lovers reunion, in a double circle, underglaze blue.

Condition: A chip to the outer rim.