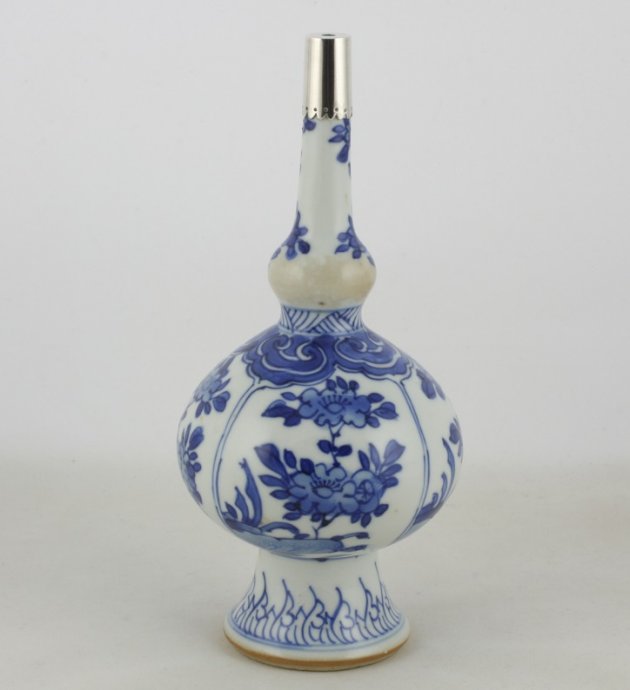 Rosewater sprinkler on tall, spreading foot with deep recessed glazed base. A globular body with a long tapering neck, fitted with an silver mount (unmarked). Decorated in underglaze blue with around the foot a stylized lotus-leaves border. On the body four panels filled with flowering plants growing from taihu (garden) rocks. On the shoulder a ruyi and zig-zag lines-pattern border. The long tall neck with two flower sprays.

The shape draws on Persian metalwork designs from the 16th and 17th centuries. Fragrant rosewater (gulaul) was used for refreshment, cleaning and scenting at both religious and secular events in the Islamic world. In Western settlements all over Asia they were widely-used as well. (Düsseldorf 2015, p.276)

Rose water sprinklers, known as gulabpash, have been used in India since the Mughal period for the purpose of refreshing oneself by moistening one's face, washing hands after a meal or for sprinkling a visitor as a gesture of welcome. Dutch traders discovered them in India and subsequently ordered porcelain bottles in various designs to be made in China. These bottles were partly sold in the Ottoman Empire, where local silversmiths fashioned artistic stoppers for them. Today, rose water bottles are found in the Sultan's Collection in Istanbul as well as in some Dutch museums, for example the Princessehof in Leeuwarden or the Museum Boijmans van Beuningen. (Suebsman 2019, p.74)

Perfumation and thurification have a very long history and can be traced back to prehistoric times. For thurification various types of incense burners were and are used until this day. For perfumation, rose-water was used that was stored and applied in specially made sprinklers. (META-Museum: Chinese Export Silver for the Islamic World, (A. von Ferscht, www.chinese-export-silver.com))

Rosewater sprinklers were are known to be decorated in underglaze blue, in 'Red & Gold' or 'Rouge de Fer' , or the body was (partly) covered in powder blue, Batavia brown or some other monochrme colour. At first they were only exported and used as such in Batavia later on in the West they were often fitted with metal or silver mounts. In the Netherlands they served as curiosities and decorative items. (Jörg & Van Campen 1997, p136)

Condition: Some discolouration of the glaze just above the shoulder, caused by the firing process and a tiny fleabite to the foot. 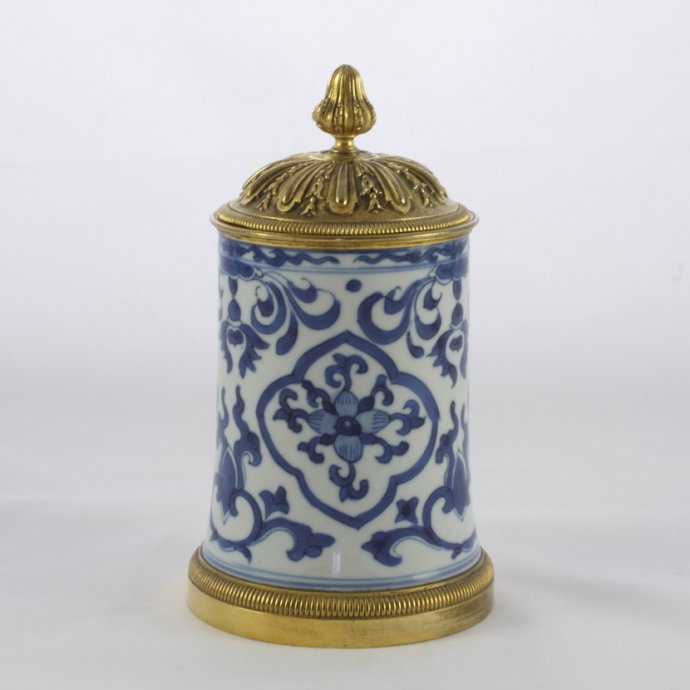 Such covered jars, called doppotten in Dutch, dop meaning 'cover', are typical of the assortment for the Dutch market. They are still to be found in private and public collections, usually ribbed, painted in underglaze blue and showing a great variety of decorations. (Jörg & Van Campen 1997, p.111) 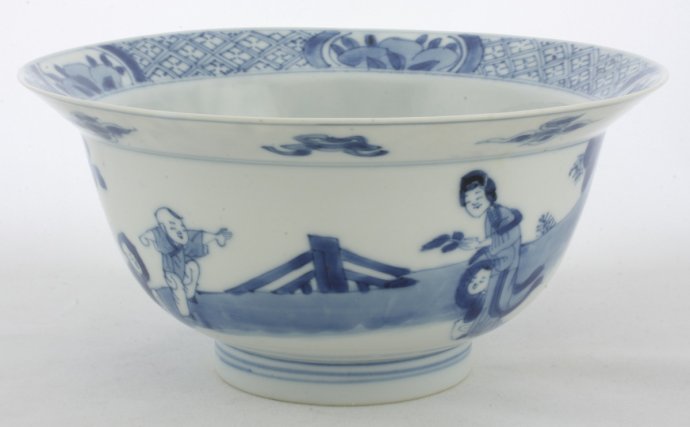 Bowl or klapmuts on footring with a spreading flat rim. Decorated in underglaze blue on the outside with a continuous scene of a "Long Eliza" figure holding a flowering stem and playing with three little boys in a fenced garden and a "Long Eliza" figure holding a flowering stem, standing near a taihu rock and a banana plant. Around the rim auspicious symbols alternating with flaming ruyi heads.On the bottom inside a little boy in a riverscape encircled by a double, concentric band the sides are undecorated and on the rim a trellis pattern border with four reserves filled with peaches. Marked on the base with the six-character mark: Da Ming Cheng hua nian zhi, (Prepared during the Chenghua reign of the Great Ming Dynasty (1465-1487)), in a double circle, underglaze blue.

Bowls of this shape with a flat rim are traditionally called klapmuts in Dutch, comparing the shape with a cap with flaps. Rinaldi states that they were specially developed to meet a demand from European customers, who wanted to be able to rest their spoons in the bowl without damaging the edge. In fact the form was already well-known, not as shallow bowls, but asl late 15th-early 16th century large and fairly deep dishes in underglaze blue or as Song and early Ming celadon saucers and dishes. The klapmuts is just another variety in the gradual development of this type. This decoration shows one of the most popular motifs of that time, the slender Chinese woman, holding a flower. In Dutch she was called a Lange Lijs, which became "Long Eliza" in English. (Rinaldi 1989, p.118), (Jörg & Van Campen 1997, p.60 & p.101)

The philosopher (Mengzi (also: Mencius, 370-290BC) is considered the second-greatest sage of China after Confucius. There is a saying in China, mengu sanqian (Mengzi's mother moved three time), meaning that a family simply has to move house if the surroundings of the home harm the development of a child's character, Legend has it that after the father's death. mendzi's family moved near to the graveyard in order to be close to the father's grave. Soon Mengzi and the children in the neighbourhood started to imitate mourners. The mother did not think this a suitable atmosphere for a Confucian education and moved to the vicinity of a marketplace, where Mengzi imitated the shouts of the stallholders. At long last the mother moved to live in the vicinity of a school, where Mengzi tried to be like the teachers and eventually became a scholar himself. The number 'Three' in the saying of course does not mean exactly three, but 'many' moves instead. From the various versions of the story, this bowl depicts a fight between little Mengzi and a boy next door as the reason for moving. Hence the scene on the bowl exemplifies motherly care. (Suebsman 2019, p.38)

Condition: A fleabite, frit and a frit with a consolidated hairline to the rim 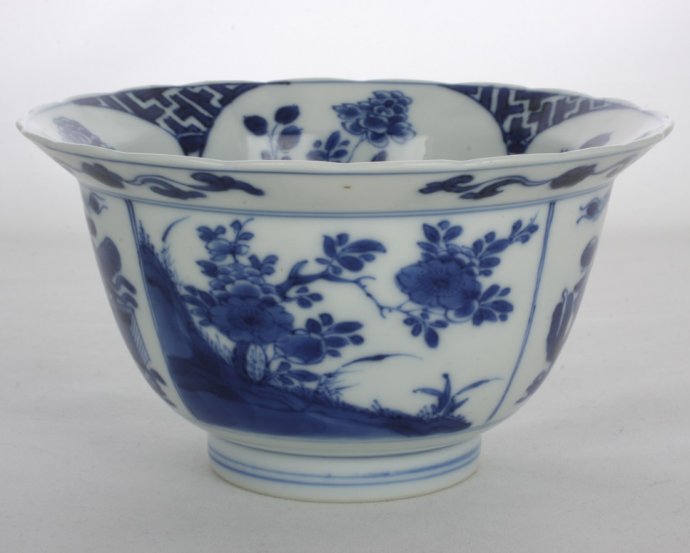 The shape and the outside decoration resemble those of Kraak Porselein klapmutsen of the first half of the 17th century. When the export trade was resumed in the 1680s and the Dutch became good customers again, there was a tendency to revive the traditional Kraak porcelain shapes and the style of painting with decoration arranged in wide and narrow panels. Some pieces are more or less close imitations, others, like this bowl, are hybrids, combining some Kraak characteristics with the new Kangxi patterns. Most examples are painted in underglaze blue, but the type is also known from a few, rare famille verte pieces. The fashion was short lived as new shapes and decorations soon took over. The Yu, "jade", character mark is traditionally called the F-mark in the Netherlands and is very common on good-quality blue and white Kangxi export porcelain. (Jörg & Van Campen 1997, p.105 & p.115) 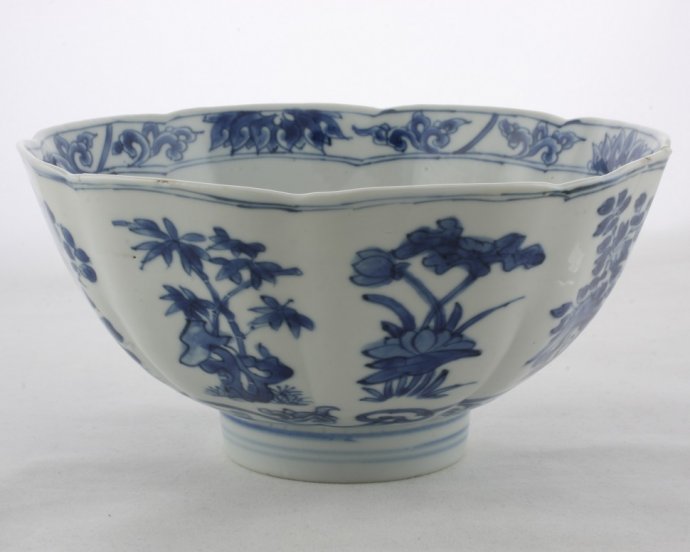 Exhibited: The Asian Galleries Reinmagined - Color Across Asia held from 21 December 2016 to 13 May 2018 at the Ackland Art Museum, The University of North Carolina at Chaphil Hill, The United States of America, Object Guide no. 5.

Octagonal bowl on footring with spreading sides and a lobbed rim. Decorated in underglaze blue on the outside around the foot a ruyi head on a lotus scroll pattern border the panels are filled with flowering plants, including bamboo and peony. On the bottom a flowering peony plant growing from a taihu rock. Around the inner rim a continuing lotus scroll. Marked on the base with the six-character mark: Qi Yu bao ding zhi zhen, (Precious object of rare jade among treasured vessels), in a double circle, underglaze blue.

Condition: A tiny firing flaw, three frits one with a connected hairline and a chip to the rim. 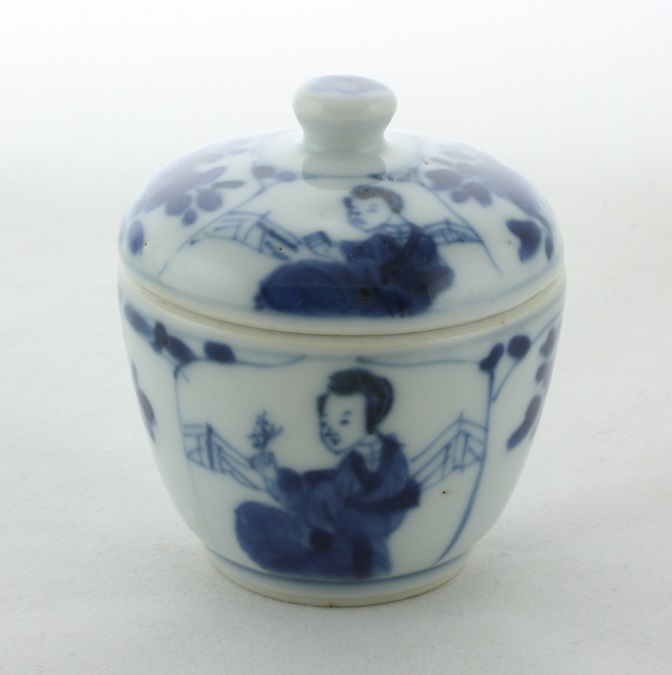 Miniature covered bowl on footring. Steep sides, domed cover with flattened knob. The base is glazed. Decorated in underglaze-blue with on the body four panels showing a flowerpot alternating with a "Long Eliza" figure seated in a fenced garden holding a twig alternating with flowering plants. On the knob a single flower head.

This rare shape illustrates the variety of objects Chinese potters were producing for export during this period. Stimulated by competing private traders, they rang the changes on forms and decorations in such a way that new models could appear on the European markets almost every year. In the Netherlands, these slender women engaged in some form of activity in a landscape or on a veranda, were called lange lijzen, translated in English as Long Eliza's. (Jörg & Van Campen 1997, p.101). (Jörg 2002/2, p.96)

Condition: A firing flaw to the inner rim. 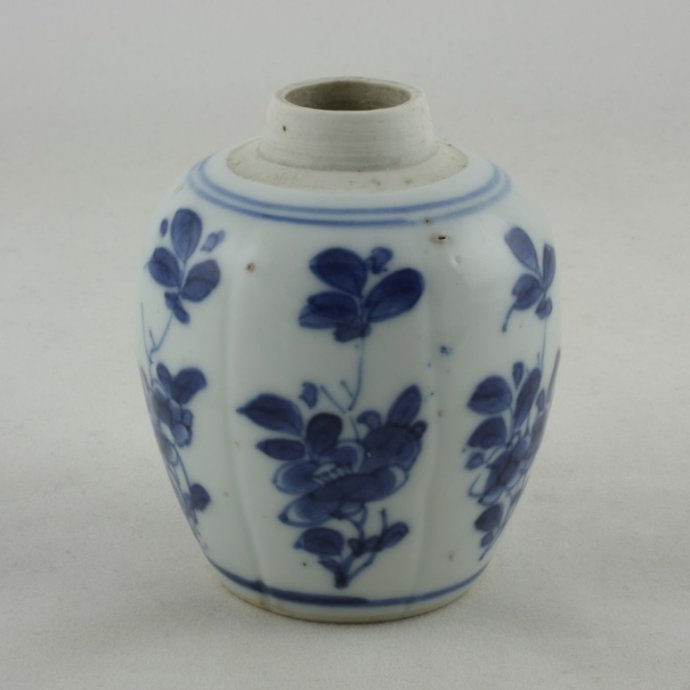 Jar of moulded form on a flat unglazed base. On the shoulder a short, unglazed, cylindrical mouth. The original cover is missing. Decorated in underglaze blue with on all six panels flowering branches around the neck a double concentric band.