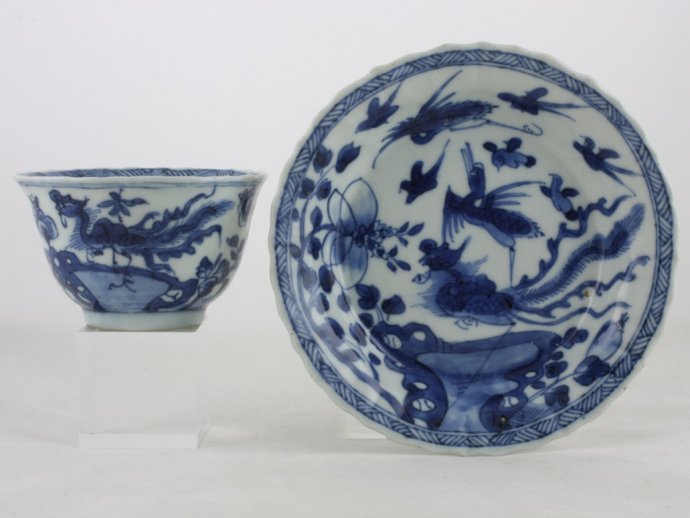 Teacup and saucer on footrings, the teacup with a slightly everted moulded rim and a scalloped edge, the saucer with a moulded flat rim and a scalloped edge. Decorated in underglaze blue with a phoenix perched on pierced rockwork flanked by flowering plants. In the air two courting cranes and various birds in flight. Around the rim a zig-zag lines pattern border. On the reverse, around the footring, a border of twelve moulded lotus petals. The teacup is decorated en suite.

Grus montignesia, or the Manchurian crane. 'Next to the fêng (vide PHOENIX), this bird is the most celebrated in Chinese legends, in which it is endowed with many mythical attributes. It is reputed as the patriarch of the feathered tribe and the aerial courser of the immortals. The crane itself is an auspicious symbol, representing longevity and wisdom. They accompany Daoist immortals (xian, hsien) bringing from The Isles of Paradise the tablets in their beaks. A pair of cranes symbolizes 'Long Marriage' as cranes mate for life. (Williams 1976, p.101), (Pijl-Ketel 1982, p.279)

The standing Phoenix and his environment that since he is a chimerical creature, the phoenix may adopt the 'image' of natural birds and also 'influence' them to stimulate him, provided only stunning beauty is the result. This unique creature is composed of admirable parts of various animals. The phoenix has the head of a pheasant, surmounted by a cock's comb, the beak of a swallow, the neck of a tortoise. He subsides on the seeds of bamboo and on sacred springs. He is virtue and benevolence, strides rather than walks. He is over six feet tall. Flying, he fills the air with music. The feng huang is the phoenix of Chinese writers, and like its counterpart in Arabian history, is adorned with everything that is beautiful among birds. The etymology of the name implies that itis the Emperor of all birds; and as is the unicorn among quadrupeds so is the phoenix the most honourable among the feathered tribes. (Williams 1976, p.323), (Harrisson 1979, pp.63-68)

To this day there are 16 identically shaped and decorated teacups and saucers in the Hluboká Castle (Prague) collection with this ornamentation, so it can be assumed that the nobility used this crockery, especially on festive occasions. The decoration represents the classic type abundantly used towards the end of the Kangxi period. Similar cups with phoenix or crane motifs were also found during the archaeological exploration of the shipwrecked Chinese junk known as the Ca Mau (1725). (Amsterdam 2007, pp.116-117), (Suchomel 2015, p.224)

For an identically shaped and decorated teacup and saucer, please see:

Teacup: A restored frit and hairline to the rm.

Saucer: A short hairline and some tiny frits to the rim. Some frits and chips to the footring 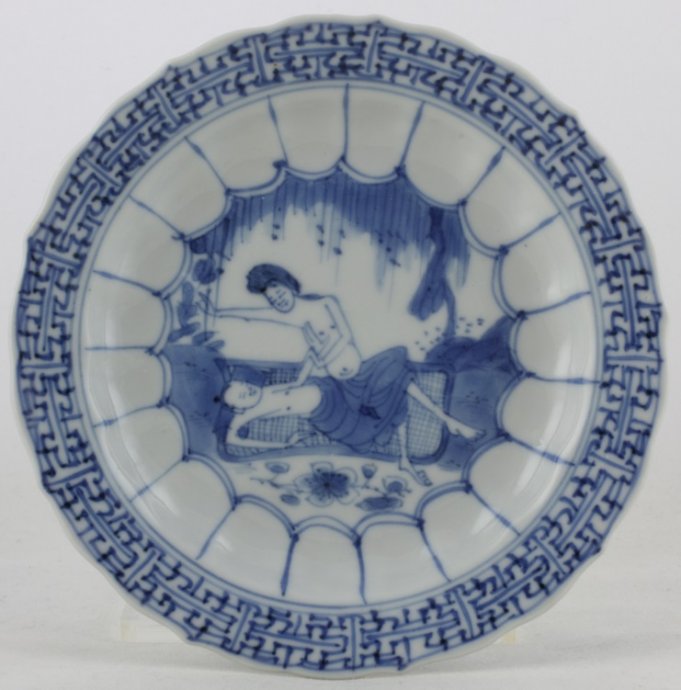 For an identically shaped and decorated teacup and saucer, please see:

Condition: A firing flaw with a frit to the footring, two very tiny fleabites and a T-shaped hairline to the rim. 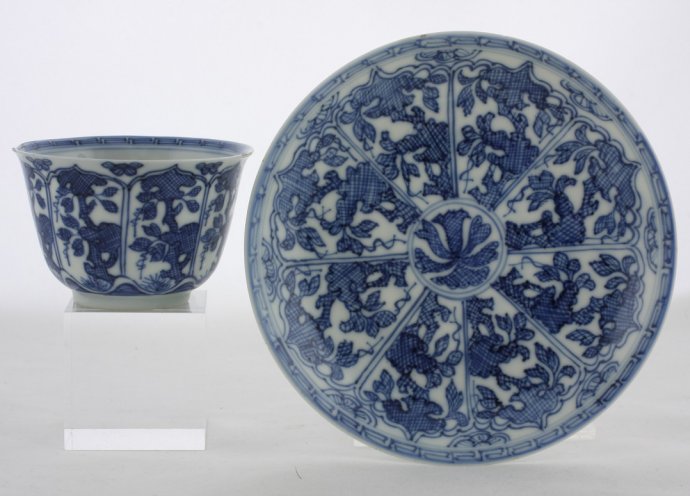 Teacup and saucer on footrings, slightly everted rims. Decorated in underglaze blue with, so-called, hatching lines technique with a central roundel filled with a flower head, on the sides eight lotus petal-shaped panels filled with leafy scrolls, around the inner rim a meander pattern border. On the reverse leafy sprays, on the base a shop mark in a double circle in underglaze blue. The teacup is decorated en suite.

These criss-cross hatching lines are not a Chinese way of painting on porcelain and may have been influenced by the Dutch. This technique was short-lived for it mostly occurs on blue-and-white export wares around 1700. It occurs on teacups and saucers, beakers and small jars with covers, garnitures and other items. The style was short lived, disappearing in the early 18th century. (Jörg & Flecker 2001, pp.68-69)

Condition teacup: A chip and a hairline to the rim.

Condition saucer: A frit, hairline and some tiny spots on the rim, caused by popped bubbles of glaze during the firing process. 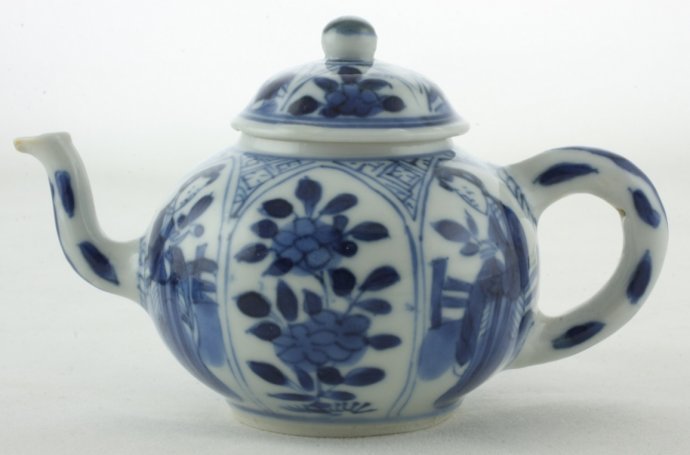 A small / miniature teapot on footring, globular, wide low mouthrim,. Domed cover with knob. S-shaped spout and C-shaped handle. Decorated in underglaze-blue with six moulded panels showing a flowering plant alternating with two panels with a "Long Eliza". Round the neck a trellis pattern border On the cover four panels showing blooming flowers alternating with little dancing boys in a fenced garden. On the handle and spout sprays of leaves. Marked on the base with the single character mark: Yu, (Jade (Yuan to Qing)), underglaze blue

In the Netherlands, these slender women engaged in some form of activity in a landscape or on a veranda, were called lange lijzen, translated in English as Long Eliza's. The Yu, "jade", character mark is traditionally called the F-mark in the Netherlands and is very common on good-quality blue and white Kangxi export porcelain. (Jörg & Van Campen 1997, p.115), (Jörg 2002/2, p.96) 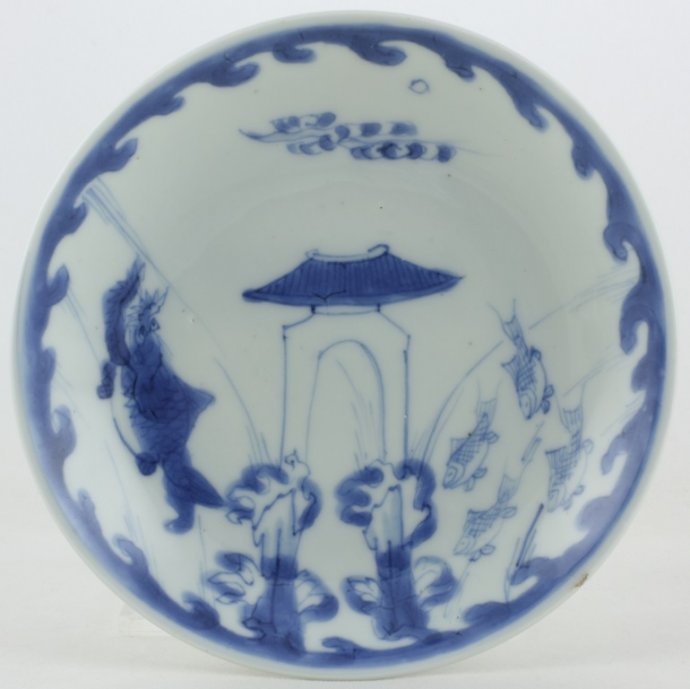 Saucer on footring, slightly everted rim. Decorated in underglaze blue with, from right to left, carp swimming up a river, trying to leap up a gate and pass above the rapids to transform into dragons. On the rim a wave pattern border. The reverse is undecorated. The matching teacup is missing.

Fish are among the earliest known subjects on Chinese ceramics appearing in the Neolithic period of the fifth to fourth millennium BC. Fish are rich in symbolic meaning and are a symbol of wealth and abundance. Because of the phonetic similarity between the word yu, meaning fish, and yu, meaning abundance, images of fish in Chine came to be considered emblematic of wealth and prosperity. The reproductive power of fish is regarded as a symbol of regeneration and fecundity. And because fish are thought to swim in pairs, they are reputed to be the emblem of the joys of union, particularly of the sexual kind. The scene depicted on this saucer tells about the carp that swim up the Yellow river every year, and which on their way must leap up the Dragon Gate Falls. Not a single carp, however, out of a hundred, a thousand, or even ten thousand, can climb the falls, not even after ten or twenty years. Some are swept away by the strong currents, some fall prey to eagles, hawks, kites, and owls, and others are netted, scooped up, or even shot with arrows by fishermen who line both banks of the falls ten chō wide. Those that succeed in passing the gate above the rapids are transformed into dragons. (Kerr 1986, p.79), (Ströber 2011, p.102), (nichirenlibrary.org)

Condition: A frit with a short connected hairline to the rim. 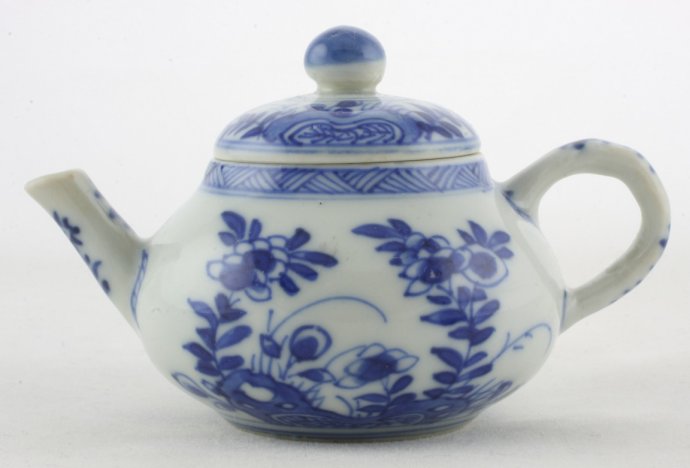 Condition: A restored spout and chip to the rim. 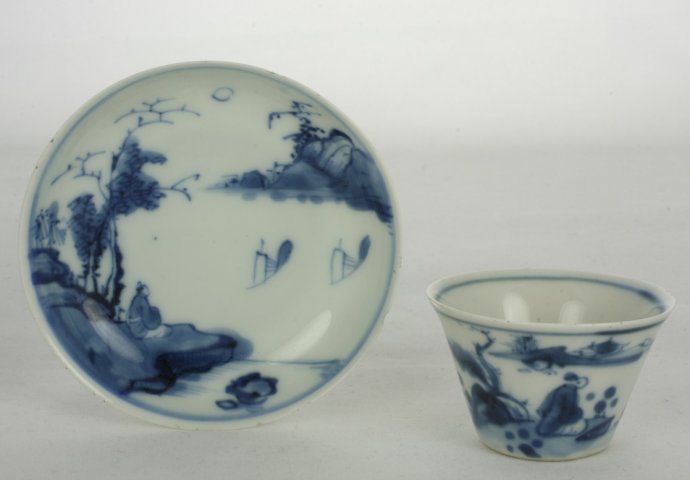 Teacup and saucer on footrings. Decorated in underglaze blue with a figure sitting on a shore under a tree in a riverscape with boats, mountains trees and the sun. Th teacup is decorated en suite.

Condition saucer: Five tiny fleabites to the rim and two spots on the rim, caused by a popped bubble of glaze during the firing process. 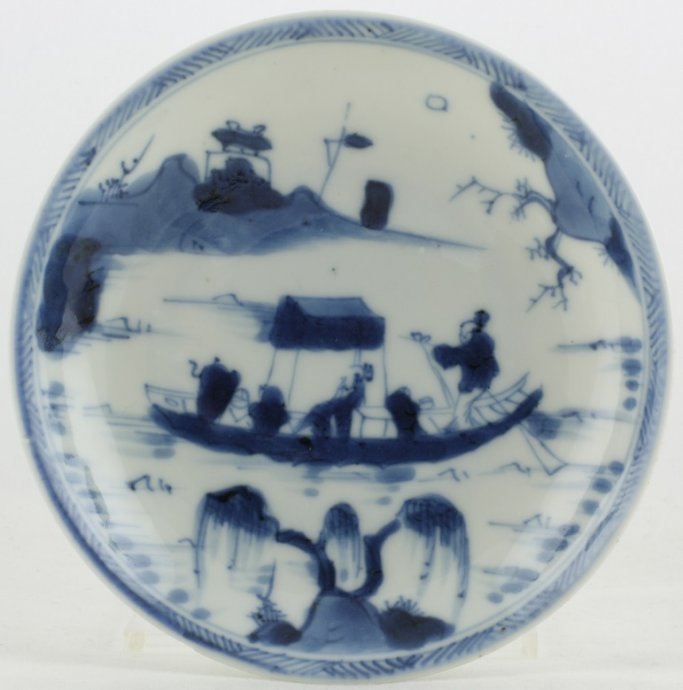 Saucer on footring, slightly everted rim. Decorated in underglaze blue with a moonlit riverscape indicating that this scene was taking place at night with the poet, Su Shi (Su Dongpo,1037-1101) and his companions in a boat which approaches the shore of the 'Red Cliff' to the right. Around the rim a zig-zag lines pattern border. The reverse is undecorated. The matching teacup is missing.

Ströber states that the poems were written when the poet was in exile in Huangzhou in the modern province of Hubei. It tells the story of a boating trip of Su Shi with guests over the Yangzhi-river in 1082. The men are at leisure, drinking wine, playing the flute while the boat is drifting beneath the red cliffs on the water. They engage in a philosophical discussion about the shortness of life and the changing and changeless aspects of things. The second poem is the description of another journey to the 'Red Cliff' which the poet undertook a couple of months later. The theme of the poem of the 'Red Cliff' as a decorative motif for porcelain appears on numerous objects of the 17th century and was particularly popular with Chinese scholars. (Ströber 2001, pp.104-105)

The 'Red Cliff' design was also used on Japanese porcelain. Fitski states that in 18th-century Japan a strong movement was devoted to Chinese culture. This had originated in the mid 17-th century when, after the fall of the Ming-dynasty in 1644, various intellectuals and monks fled from southern China to Japan. The influence of their intellectual legacy created a renewed interest for Chinese culture, Confucius studies, poetry and painting. It also led to a renewed popularity of the image of the scholar as a hermit or as an unadapted person. Especially for officials, often unsatisfied by the way Japanese governmental control was being executed, the scholar who, in solitude, could devote himself to calligraphy, poetry or art was an idealistic image. The movement also had an influence on the decoration of porcelain. On a Japanese dish we see a similar depiction of the 'Red Cliff' journey. The appreciation of Chinese motifs continued until the Meiji period; this teacup is a mid 19-century interpretation of this scene. (Fitski 2002, pp.46-47)

For a Japanese teacup, decorated with the 'Red Cliff' design, that was donated by Pater Gratia Oriental art, in December 2012, to the collection of Oriental Ceramics of the Groninger Museum, Groningen, The Netherlands, please see:

Bowls with this scene also appear on two still-life paintings dated 1627 and 1638 by the French artist Jacques Linard.(source: aziatischekeramiek.nl)

Chinese bowls from the Transitional and Kangxi periods with a similar decoration are not rare; some examples, admittedly of poor quality, were salvaged from The Hatcher Junk, c.1643, please see:

For a Ming bowl with similar decoration, please see:

For a Zhangzhou (Swatow) bowl with similar decoration, please see:

For a special bowl from the Kangxi period decorated with the first and second prose poems (Chinese fu) of The Red Cliff Ode (chi bi fu), please see:

For a brush holder from the Kangxi period decorated with overglaze gold on a powder-blue ground with the first and second prose poems (Chinese fu) of The Red Cliff Ode (chi bi fu), please see:

More pictures of object 2011714B, another identically shaped, sized and decorated, sold saucer >>