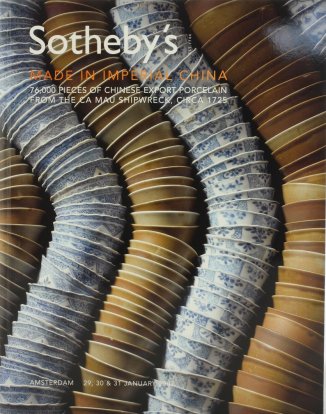 The wreck was discovered by fisherman working off the Ca Mau peninsular when their nets snagged on it. When they realised the porcelain was saleable they began dredging up as much as possible. Once the Vietnamese Ministry of Culture and Information realised what was happening they moved in quickly to secure the wreck site.

The excavation was lead by the Curator of The National Museum of Vietnamese culture. As you can see by the underside of the piece, not only does it have the Sotheby’s auction sticker but the reference numbers of the Vietnamese conservators. In all, 130,000 pieces were recovered and 76,000 of the finer condition pieces were selected to be sold by Sotheby’s

The ship was a Chinese ocean going junk, almost certainly en route from Canton (now Kuangzhou) to the Dutch trading port of Batavia (now Jakarta). Disaster struck off the Ca Mau peninsular, there was a fire on board so severe that some of the porcelain was fused together. There were a few wine cups recovered bearing the mark of the Emperor Yangzheng who reigned from 1723 to 1735. By this time tea and coffee was the rage throughout Europe and the principal traders were the Dutch East India Company, (Vereenigde Oost-Indische Compagnie, VOC) of Amsterdam. With the demand for tea came demand for porcelain by which to drink it and so most of what they imported in these year was tea wares.