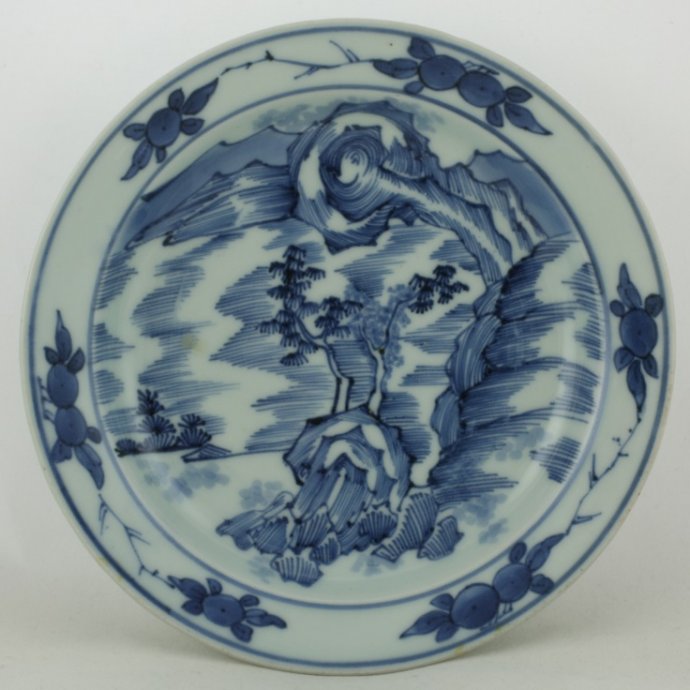 Small dish on footring with a flat rim. On the base a single spur-mark. Decorated in underglaze blue. On the centre and sides a landscape with mountains, a lake, trees and grasses. Round the rim three fruit bearing sprays. On the reverse three peach sprays, on the base a flower spray.

The mountainous landscape is portrayed in the Chinese style of 'the master of the rocks', where the parallel lines depicting the rocks suggest their shape and destiny. This decorating style was popular c.1660-1690 and was definitely not derived from the work of a single master. The original Chinese pastoral landscape in 'the master of the rocks' style appealed not only to the sensibilities of the Chinese literati who idealised rest and contemplation in nature, but also to the Western notion of China as an unspoiled paradisical land. (Jörg 2003/1, pp. 76-77, cat 48 & 49)

The decoration on this small Japanese dish has clearly been inspired by a Chinese orignal decorated in 'the master of the rocks' style. Although smaller the shape is similar to the Chinese original.

For original Chinese dishes decorated in 'the master of the rocks' style. please see: 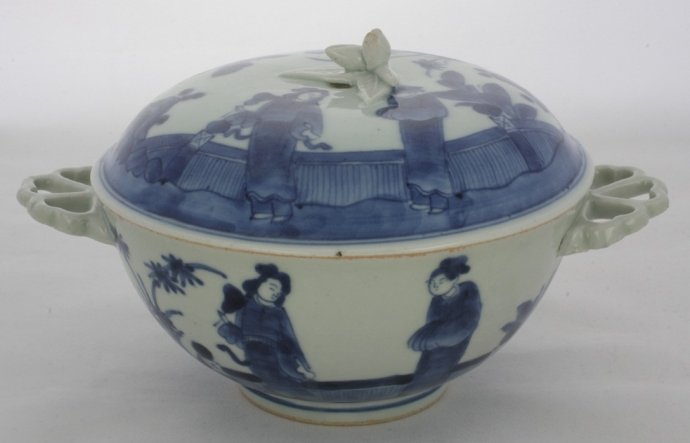 Écuelle with cover on a footring with a low domed cover and a finial in the shape of three upright pointed leaves. The base is a glazed. Applied with two openwork flange handles in the shape of half chrysanthemums. Decorated in underglaze blue with a repeated scene of two ladies on a terrace with garden rocks, a banana, pine and bamboo tree. The cover is similarly decorated. This écuelle with cover used to have a matching stand, this stand is now missing.

This écuelle (with its original, now missing, stand) is based on a form that is common in contemporary European silver or pewter. An identical piece is in the Victoria & Albert Museum, London. (Howard & Ayers 1978, p.67)

For a similarly shaped and decorated (Chinese) écuelle with cover and stand, please see:

Condition: A tiny firing tension hairline to one of the handles and two missing pieces to the fruit-shaped finial. 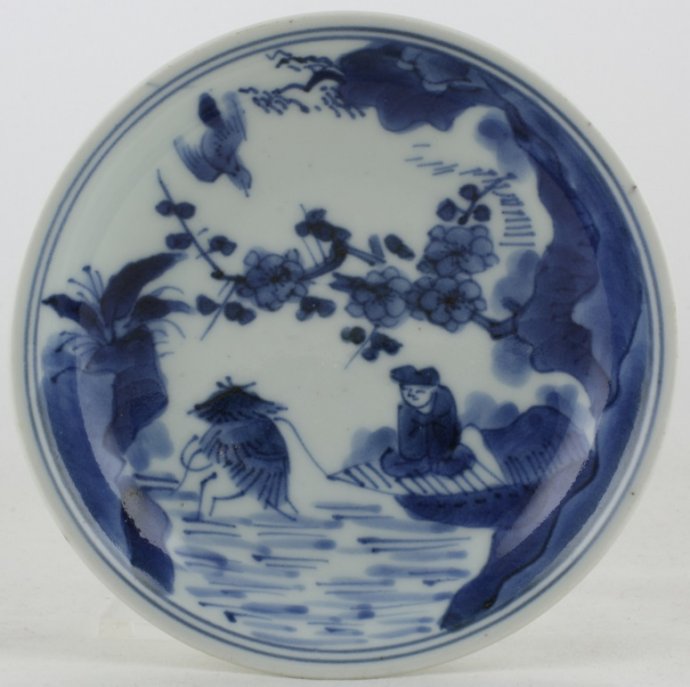 Saucer on footring, slightly everted rim. Decorated in underglaze blue with a river scene with two figures fishing, rocks, trees, plants and a bird in flight. The reverse is undecorated.

Condition: A glazed firing flaw to the inner footring. 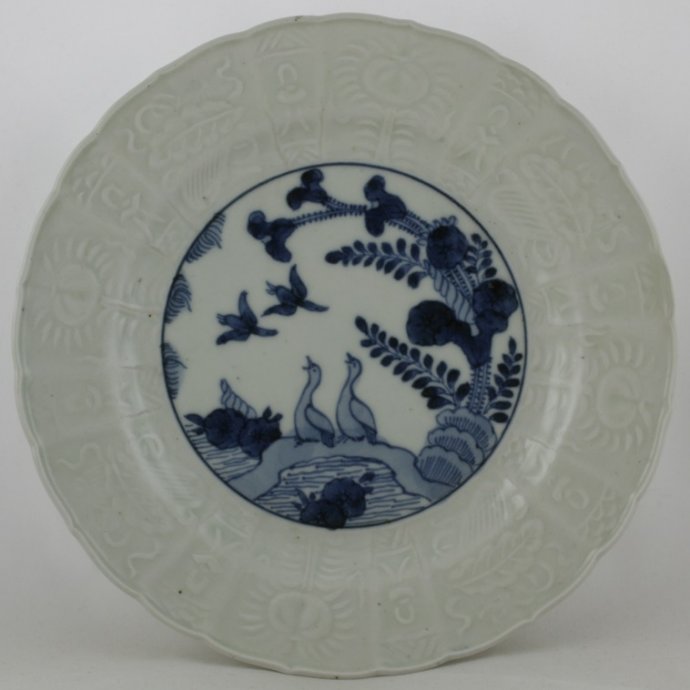 Dish on footring with a flat rim and a foliated edge. Decorated in underglaze blue in late Chinese Kraak style with a motif of two ducks in a in pond. The sides and rim moulded with large panels filled with peach and auspicious symbols alternating with narrow panels filled with tied ribbons. The reverse is undecorated. On the bottom a stylized copy of a Chinese mark in a double circle.

The first characteristic of moulded Japanese objects follows a tradition set by the Japanese makers of blue and white Kakiemon style porcelains in the 17th century. This tradition was for high quality moulding and other complex treatments of rims and borders, sometimes also with other moulding in low relief. The second characteristic is that it uses Late Ming (and sometimes earlier) styles, grids and motifs. These items of design were presumably taken from carefully treasured heirloom pieces imported into Japan about 1620 when the Japanese first made porcelain. Panelled Kraak designs may have been provided by the Dutch to be copied.

The use of drawings in the coarse bold 'free' Chinese late Kraak style shown had already been extensively used for the West during the Great Export Period on many but not all of the copies of panelled Kraak style wares. It proved to be a long lasting favourite in Japan. New carefully moulded borders were added however, making a strong contrast. Some of the new borders in perhaps the second quarter of the 18th century had a celadon glaze. Dating of some of these pieces is however still controversial. Some in the second half of the 18th century had borders with low relief designs and patterns. (Finch 1998, pp.14-15, cat. 73 & 74)

The mark is rather unusual. It is often erroneously described as the bee or insect mark. Properly orientated it is actually a somewhat stylised copy of a mark found on Chinese porcelain showing an ingot, yuan bao and crossed ruyi sceptres with a paint brush: a rebus which can be read in Chinese as Bi ding ruyi, “may things be settled as you wish”. Later variations of this mark become increasingly stylised and the elements in the motif less recognizable (I am indebted to Mr. R.E. Wright for this information)

For dishes with moulded borders in low relief please see:

For a dish with an identically central design (without the low relief border design), please see; 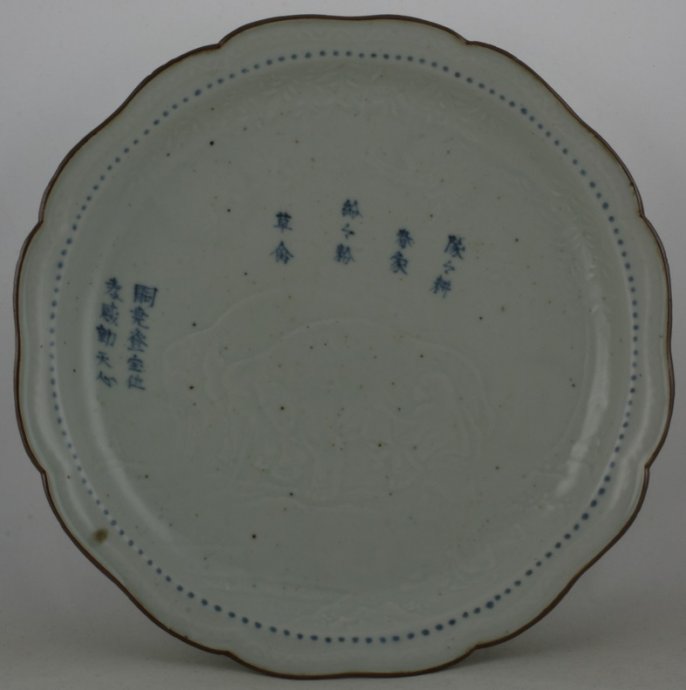 Dish on footring, straight sides, short flat rim with an upturned scalloped underglaze brown edge. On the base four spur-marks. The glaze a greyish-white colour with many pin-pricks. Decorated with a moulded low relief of two elephants under the glaze, walking to the left in a landscape with rocks, their trunks on the ground, a monk herding them. Above the elephants a text of ten characters in four lines; on the left another text of ten characters in two lines, both groups in underglaze blue. On the rim a circling line of separate small underglaze blue dots and flowering branches moulded in low relief under the glaze. On the base a square shopmark within a circle in underglaze blue.

In general, in Asian cultures the high intelligence and good memory of Asian elephants is admired. As such, they symbolise wisdom and royal power. In Japanese mythology the elephant is a tusked, fanged mythical beast which appears in both Buddhist and Shinto iconography.

The Japanese had not seen elephants until the 16th century, so representations tend to be elaborated by the fancy of the artist. Presumably because of its watery associations the elephant serves to protect wooden structures against fire and to bring about the rain. Hence it is often seen as a tusked-and-fanged short-trunked finial of roof and ceiling beams (Michael Ashkenazi, Handbook of Japanese Mythology, Oxford University Press 2008, pp. 117-118)

Around the middle of the 18th century Arita was depending on the Japanese market again for their sales. Although there was still private trade, the era of large orders for export to the West had passed by. About the same time moulded relief decoration on white porcelain or combined with underglaze blue came into fashion on the more expensive Arita porcelain. According to Fitski, the well-cared for style and brown rim reminds of pieces from the Kakiemon ovens. As a matter of fact, a template for a similar plate has been handed down in the Kakiemon family (Fitski 2002, p. 37/ note 64)

The story depicted is taken from the Neo-Confucian text known as the "Twenty-four Filial Exemplars" written by the Chinese scholar Guo Jujing (Japanese: Kaku Kyokei) during the Yuan dynasty (1260–1368). The book recounts the self-sacrificing behaviour of twenty-four sons and daughters who go to extreme lengths to honour their parents, stepparents, grandparents, and parents-in-law. The text was extremely influential in the mediaeval Far East and was used to teach Confucian moral values.

The scene on the plate shows the story of the Chinese (Ta) Shun (舜, Japanese Taishun (大舜) who was exemplar for modesty and selfless filial piety (xiao 孝). This story was set in his childhood. Shun's mother died when he was young, so his father remarried and had another son with Shun's stepmother. Shun remained filial to his father, respected his stepmother and loved his half-brother even though they tried to kill him. His filial piety moved the gods, so they protected him from harm and made the animals help him in his daily farming chores. At one time he was sent by his father to clear land in the wilderness on Mount Li, where he was aided in his task by herds of Elephants and flocks of birds. 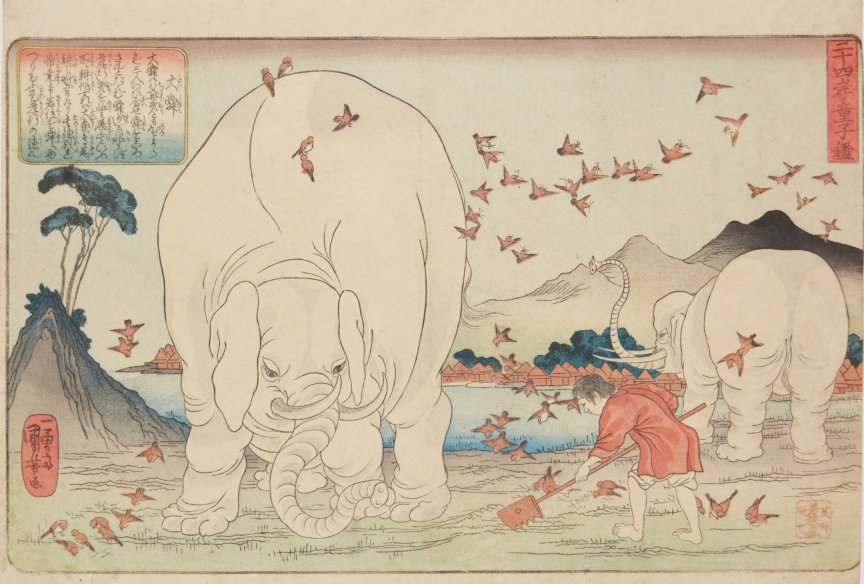 The poem on the dish translates something like this:

"Herds of Elephants plough in the Spring, Flocks of birds pull the weeds; He is the heir of Yao and mounts its Throne; the spirit of filial piety moves the Heart of Heaven".

Shuns selfless acts of filial piety eventually brought him to the attention of the Emperor, who married his daughter to him and subsequently made him his heir. Shun, also known as Emperor Shun and Chonghua, became a legendary leader of ancient China, regarded by some sources as one of the Three Sovereigns and Five Emperors. Oral tradition holds that he lived sometime between 2294 and 2184 BC.

The Chinese theme and poem fits very well with the popularity of the Literati movement in Japan. During the 18th century a movement with a craving for Chinese culture and philosophy arose, which had its origin in the middle of the 17th century, when after the fall of the Ming dynasty in 1644 a lot of Chinese intellectuals and monks fled to Japan. This was the beginning of a renewed interest in Chinese culture, especially Confucian studies, poetry and painting. The influence of the Southern Chinese painting school of literates (the movement was called ‘Nanga painting’ in Japan) was also visible in the decoration of porcelain, such as this dish.

A similary decorated set of bowls and nine small dishes are in a private collection in England.

For an identically shaped and decorated dish, please see;

For similar dishes with moulded relief and calligraphy, please see: