Sold Polychrome wares other since 1722 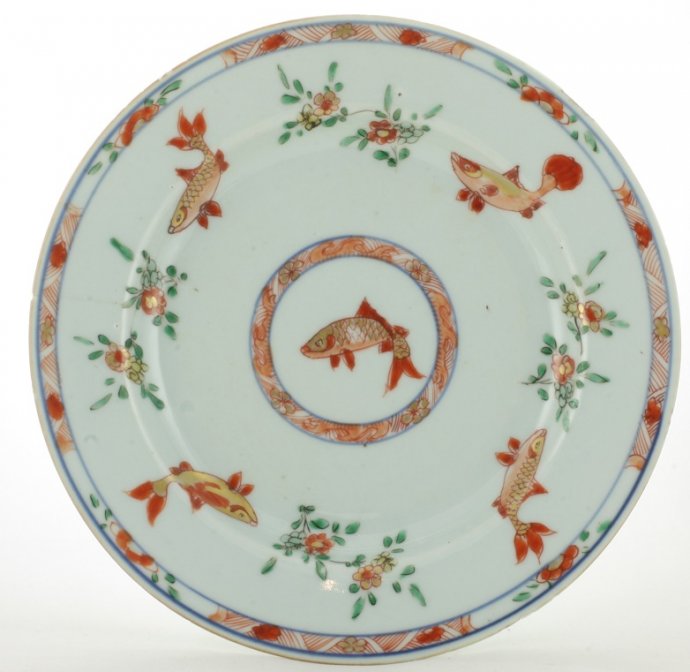 Dish on footring, flat underglaze brown edged rim (jia mangkou). Decorated in underglaze blue, iron-red, gold and overglaze green and black enamel with a fish in a central roundel, surrounded by a border with flower heads and foaming waves. On the sides fish alternating with flower sprays. Around the rim a zig-zag lines pattern border with flower heads and four reserves filled with florets between scrolls. The reverse is undecorated.

Condition: A hairline, three chips, one with a connected hairline, a rough spot, and some tiny frits, all to the rim. Some shallow chips to the footring. 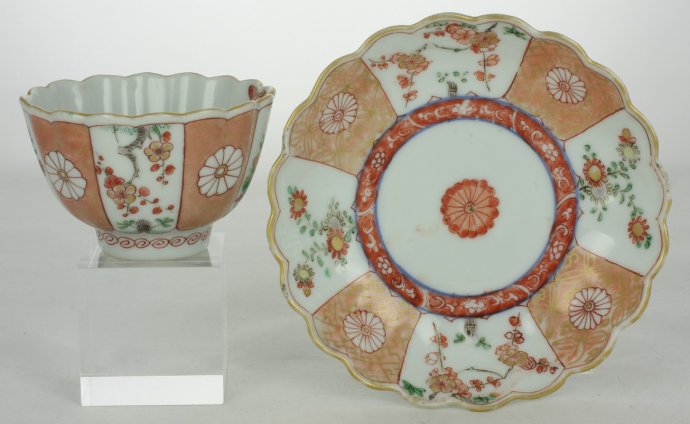 Teacup and saucer on footrings, curved sides with petalled rims. Polychrome decorated in iron-red, gold and other overglaze enamels with a single stylised chrysanthemum flower encircled by a floral border in gold on an iron-red ground. On the sides eight panels of two or three petals wide. The smaller panels have an orange ground with gold diaper and central chrysanthemum flower repeated in the centre, the others have flowering prunus and chrysanthemum. The reverse is undecorated. Marked on the base with the symbol mark: Artemisia leaf, in a double circle, underglaze blue. The teacup is decorated en suite.

The decorating design used on this Chinese teacup and saucer clearly derived from Japanese Imari saucers.

Teacup: A chip to the inner footring. 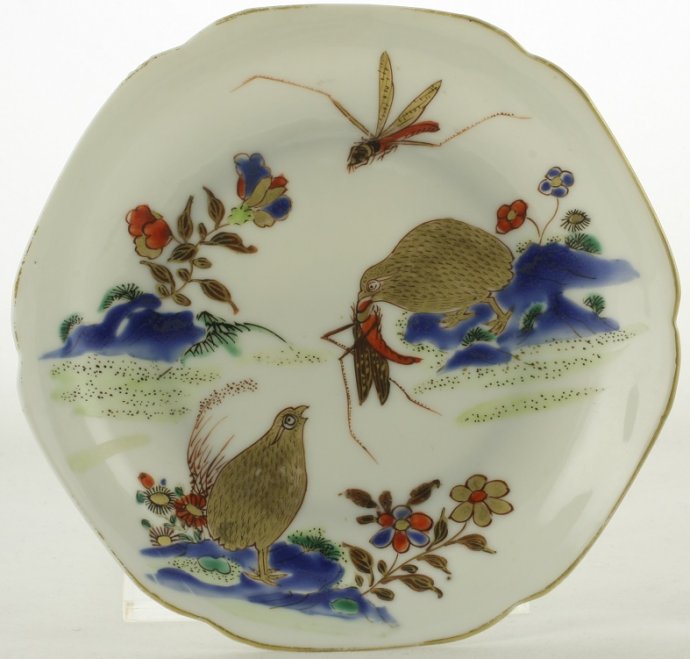 Saucer on footring, everted rim with six small indentations. Polychrome decorated in iron-red, black, gold and other overglaze enamels with two quails standing on rockwork with flowering plants and two insects one in flight and one being eaten by a quail. The reverse is undecorated. The matching teacup is missing.

The indented rim is characteristic of a group of well-enamelled tea-wares of a thin, pure body produced during the Yongzheng and Qianlong reigns. The quail, or a pair of quails, fairly often used as a motif on fine porcelain, is a symbol of courage because of its fighting qualities. (Jörg & Van Campen 1997, p.213)

Condition: A fleabite to the rim. 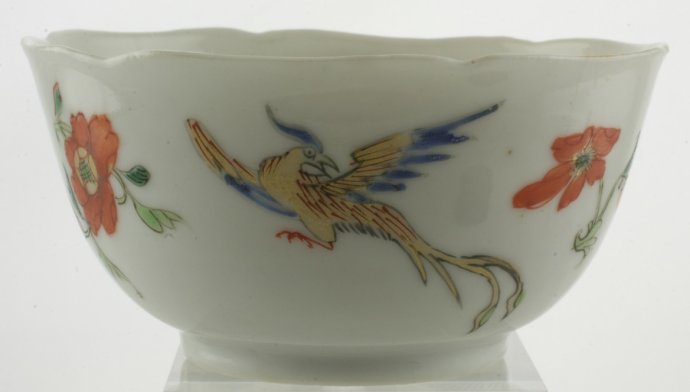 Hexafoil teacup on footring. Polychrome decorated in iron-red, black, gold and other overglaze enamels with a bird in flight alternating with flowering peony sprays. In the centre a single peony flower head. The matching saucer is missing.

The indented rim is characteristic of a group of well-enamelled tea-wares of a thin, pure body produced during the Yongzheng and Qianlong reigns. (Jörg & Van Campen 1997, p.231)

Condition: A fleabite to the footring and a fleabite with three hairlines to the rim. 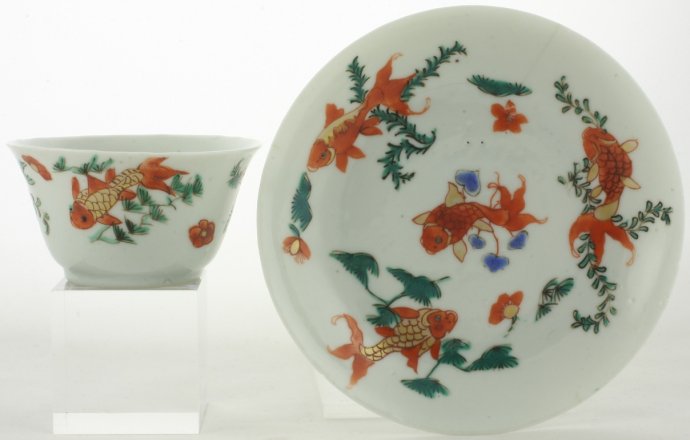 Teacup and saucer on footrings, slightly everted rims. Polychrome decorated in iron-red, black, gold and other overglaze enamels, with four fish swimming in between waterweeds such as pondweed, duckweed and lotus. The wavy depiction of these plants and the lively lines indicate the movement of water. The reverse is undecorated. The teacup is decorated en suite.

The four fish might be identified as a qing, a fresh water mullet, and bai, a variety of carp. Carp are identified by the wide mouth and two pairs of barbels attached to their lips. The third one is a lian, a kind of bream, and a gui, the mandarin fish, a colourful breed of perch with a large mouth. In Chinese tradition the combination of these fish among lotus and other waterweeds stands for a character phrase, qingbai lijie, meaning unsullied and incorruptible, a reference to the Confucian ideal of the perfect gentlemen. This motif was rather unusual before the Ming dynasty (1368-1644) and became popular in the middle of the Ming dynasty. This teacup and saucer were made in the Yongzheng period (1723-1735) when taste for the ancient and archaic gave rise to a revival of Ming designs. (Ströber 2011, pp.104-106)

Saucer: Two firing flaws, a fleabite and two hairlines to the rim. 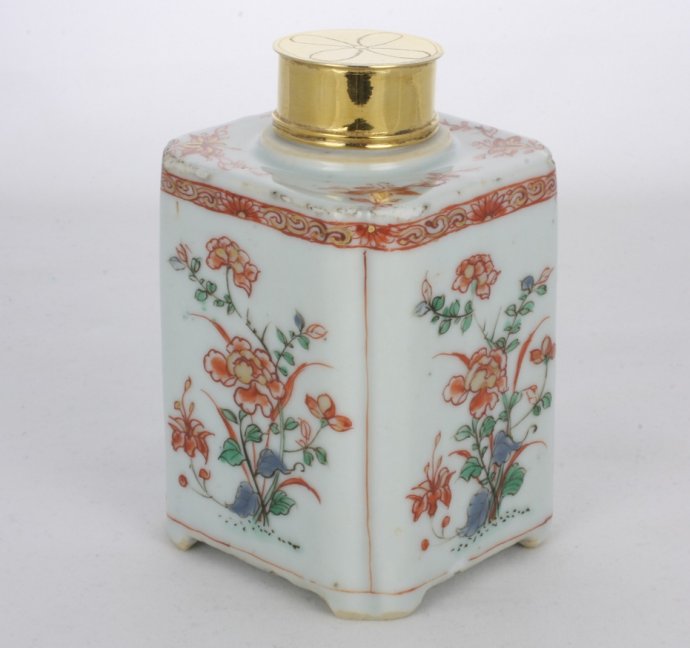 Tea caddy of square form with canted corners, four flat feet at the corners, flat shoulder with a short unglazed upright neck. The original cover is missing and replaced with a golden cover (marked). Polychrome decorated in iron-red, gold and other overglaze enamels, on all sides with flowering lily and peony in Red & Gold / Rouge-de-fer. Around the shoulder a spiral pattern border, on the flat shoulder four groups of flowering plants.

Condition: A firing flaw to the rim of the neck, some glaze frits and chips to the edges and a glaze chip to the foot. 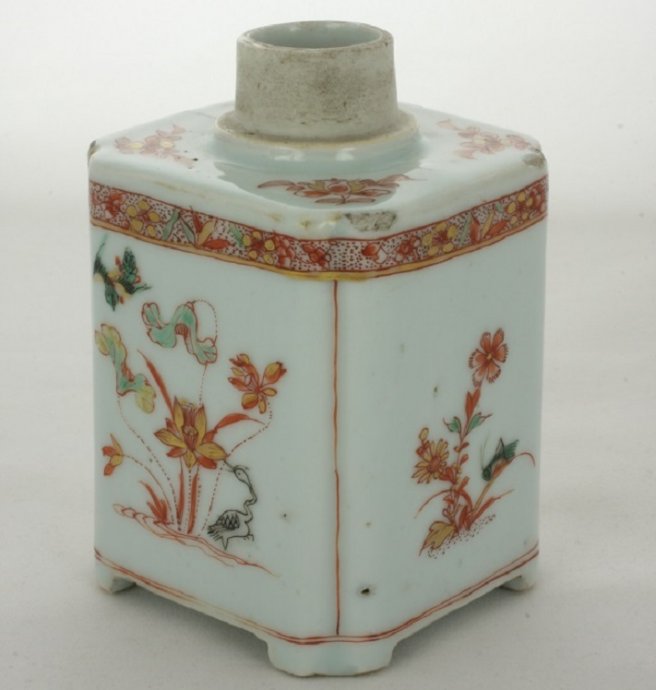 Tea caddy of square form with canted corners, four flat feet at the corners, flat shoulder with a short unglazed upright neck. The original cover is missing. Polychrome decorated in iron-red, gold and other overglaze enamels with flowering plants and a grass hopper alternating with flowering lotus and lily and a crane with a bird in flight. Round the shoulder a floral border on an iron-res speckled ground. On the flat shoulder in each cortner a single flower spray.

Condition: Some glaze frits and chips to the edges. 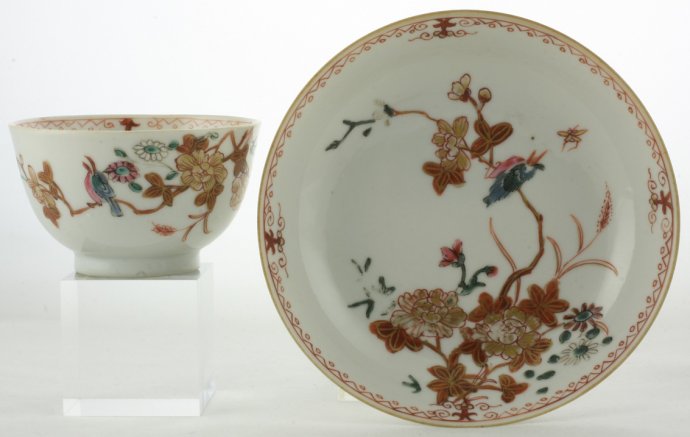 Teacup and saucer on footrings, straight rims. Polychrome decorated in iron-red, black, gold and other overglaze enamels with flowering chrysanthemum and peony a bird perched on a branch and an insect in flight. On the rims a diaper pattern border with four single flower heads. The reverse is undecorated.  The teacup is decorated en suite.

Teacup: A tiny hairline to the rim.

Saucer: Some wear to the gold and enamel decoration. 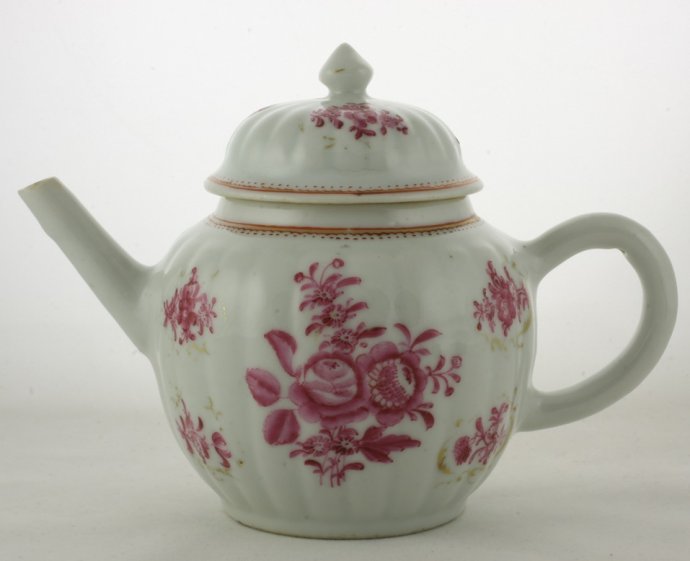 Globular teapot on footring, ribbed body, domed, ribbed and pierced cover with a pointed knob. Curved C-shaped handle with a straight spout. Decorated in iron-red, gold and overglaze lilac pink enamel en camaïeu with one large and four small groups of flower sprays. Around the mouth a continuous border of beads. The cover is decorated with three small groups of flowering branches and on the rim a continuous border of beads.

The scattered flowers of this kind have been borrowed from German examples. Flower patterns of this kind were extremely popular on Chine de commande objects during the second half of the 18th century. Dutch East India Company documents repeatedly specify that Chinese porcelain decorated with 'flowers of Saxony' should be purchased, it sold very well in the Netherlands as an alternative to expensive German porcelain. The French tern 'en camaïeu' is generally used to denote a painting done in just one colour, usually this reddish-mauve which was apparently fashionable in the mid-18th century. (Jörg 1995, pp.95-96), (Jörg & Van Campen 1997, p. 294)

Condition: A firing flaw to the footring with two connected hairlines, one to the base and one to the body. A frit to knob and a chip to the underside of the rim of the cover. Wear to the gold decoration. 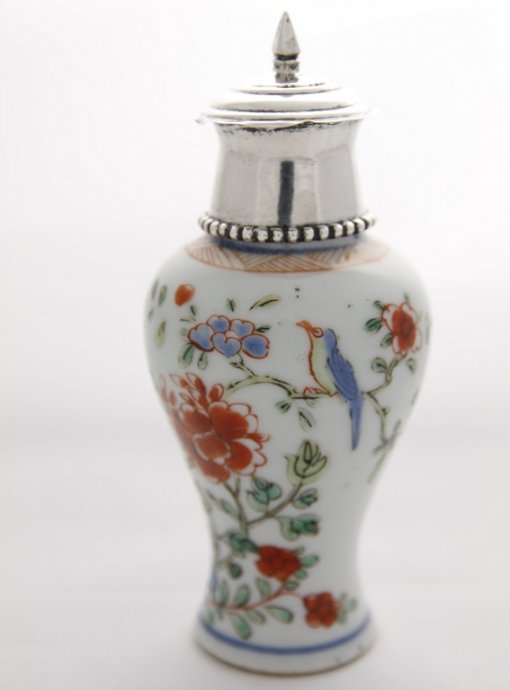 Baluster vase on footring with an upright neck, rim unglazed inside for cover, now missing and replaced with a Dutch silver cover (unmarked). Polychrome decorated in underglaze blue and overglaze enamels with a flowering chrysanthemum growing from taihu (garden) rocks and two birds one in flight the other perched on a branch.

Condition: A firing flaw to the footring and two small hairlines to the neck.