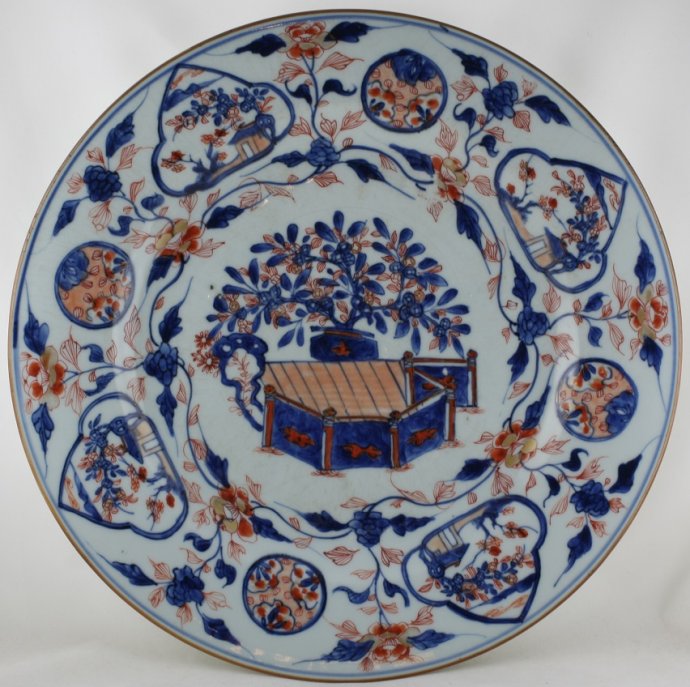 Large dish on footring, flat rim. Chinese Imari, decorated in underglaze blue, overglaze iron-red and gold with a jardinière filled with a flowering tree on a fenced terrace with a taihu (garden) rock. On the sides a continuous scroll with flower heads and leafy stems. On the rim onion shaped panels filled with a river scene alternating with a roundel filled with flower heads. The panels and roundels are flanked by flower heads and leafy stems who are connected to the floral scroll on the sides. The reverse is undecorated. On the base the symbol mark, Artemisia leaf, in a double circle, underglaze blue.

In his Chinese Export Porcelain, Chine de Commande (1974), Lunsingh Scheurleer states: A plate, once in the Dresden collection of August the Strong (Plate 316) (4), has a more Chinese style of decoration. The central part is decorated with a flower-vase behind a fence, and the rim with alternating round and ju-i panels with flowers. In note (4) he writes: This plate was bought in June 1723, and is mentioned as Japanese in the catalogue; the inventory number, a cross and 'NZAIO' point in the same direction. I have to thank Dr. F. Reichel, director of the Staatliche Kunstsammlungen at Dresden, who gave me this information. The thin white body and the design prove its Chinese origin. In the Franeker museum there are two similar plates. This may indicate that the Dutch East India Company at one time bought a lot of these plates at Canton and sold one or more to Augustus. (Lunsingh Scheurleer 1974, pp.165-166) 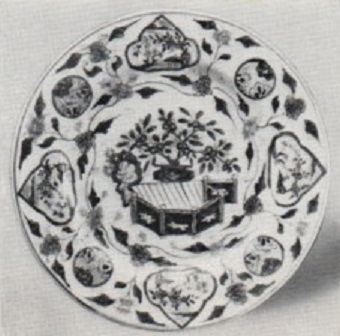 Reproduced from: Chinese export porcelain. Chine de Commande, (D.F. Lunsingh Scheurleer, London 1974), cat. 316. This dish is not included in this sale/offer. (copyright in bibliographic data and images is held by the publisher or by their respective licensors: all rights reserved)

Four identically shaped, sized and decorated dishes are in the collection of Augustus the Strong in Dresden and registered under the number P.O. (Porzellan Ostasien) 5699, 5735, 5738 and 5779. For these dishes, please see;

For other identically shaped, sized and decorated dishes, please see;

Condition: Overall fine crazing to the glaze. A firing flaw to the inner footring and a filled chip to the reverse rim. 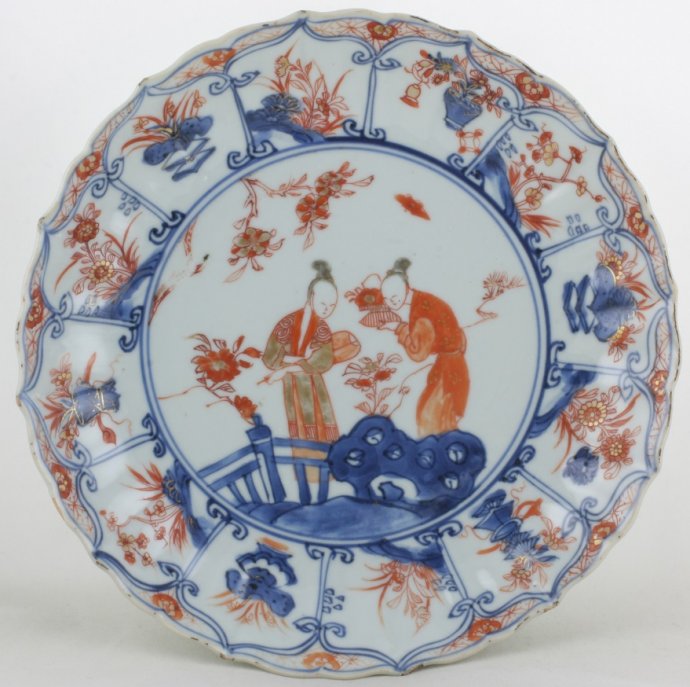 On this dish we see the two characters Yingying and Hongniang admiring flowers in the gardens of Pujiu Monastery. The student Zhang is about to see Yingying for the first time and fall in love with her. (Düsseldorf 2015, cat. 123.1 & Suebsman 2019, p.44)

For an identically, shaped, sized and decorated dish in a private North German collection, please see:

The design with the twelve impressed lotus-petal panels can also be found on on Chinese dishes, decorated in famille verte enamels from the period 171-1725, with the arms of Dutch cities and provinces. For examples of these type of dishes please see:

Condition: Some firing flaws, caused by the firing process to the reverse, some wear to the decoration and some glaze rough spots to the rim. 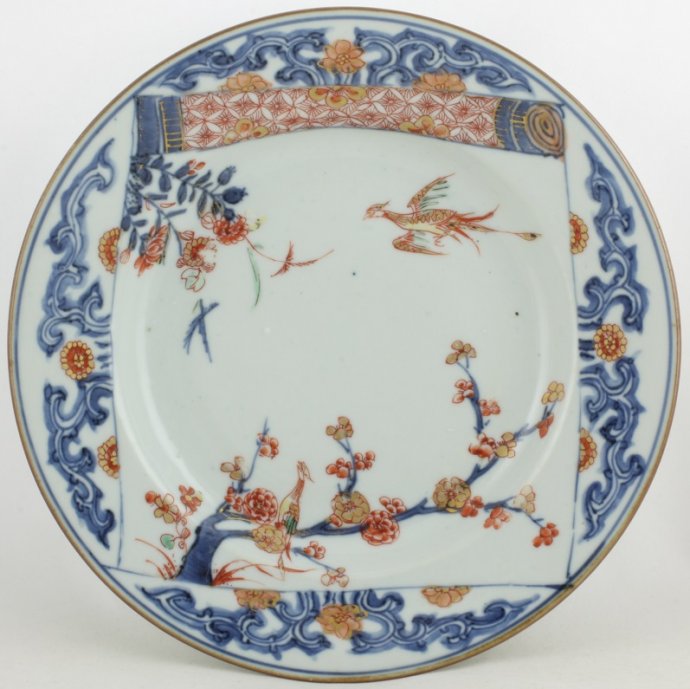 Dish on footring, flat underglaze brown-edged rim (jia mangkou). Chinese Imari, decorated in underglaze blue, overglaze iron-red, green and black enamel and gold with a half-open scroll showing flowering chrysanthemum, a pheasant in flight and a pheasant nesting on the branch of a prunus tree. The scroll is outlined by rather pronounced Japanese foliate and floral scrolls with chrysanthemum flowerheads. On the reverse two flowering sprays.

Chinese Imari was first introduced in the early years of the 18th century as an imitation of Japanese 'Imari'. It was based on a simpler form and was essentially an export type. The Chinese did not imitate the Japanese Imari models but copied the designs like kiku (chrysanthemum), roundels and half-roundels, fan-shaped panels, partly unrolled bamboo blinds and rather pronounced foliate and floral scrolls. The Japanese Imari colour combination was also copied, the Chinese Imari colour palette consisted of iron-red enamel and gold in combination with underglaze blue. Sometimes other colours, and even certain enamels of the famille verte such as green and black, were sparingly introduced and used in a subtle way. Chinese Imari remained popular into the 1720 after which it became overshadowed by opaque enamels. (Howard & Ayers 1978, vol. 1, p.137), (Jörg & Van Campen 1997, p.199), (Sargent 2012, pp.183-188)

On this Chinese Imari dish the half-open scroll and the pronounced foliate and floral scrolls are clearly Japanese design elements copied by the Chinese who in this way tried to appeal to their newly re-established European market. Similar dishes were collected by August the Strong, elector of Saxony and King of Poland, and were also copied by the Meissen porcelain factory around 1760. (Sargent 2012, p.188)

All known published versions of this design show one magpie perched on the branch of a prunus with bamboo. Interestingly this particular dish shows two phoenixes and chrysanthemum.

Condition: A frit to the rim. 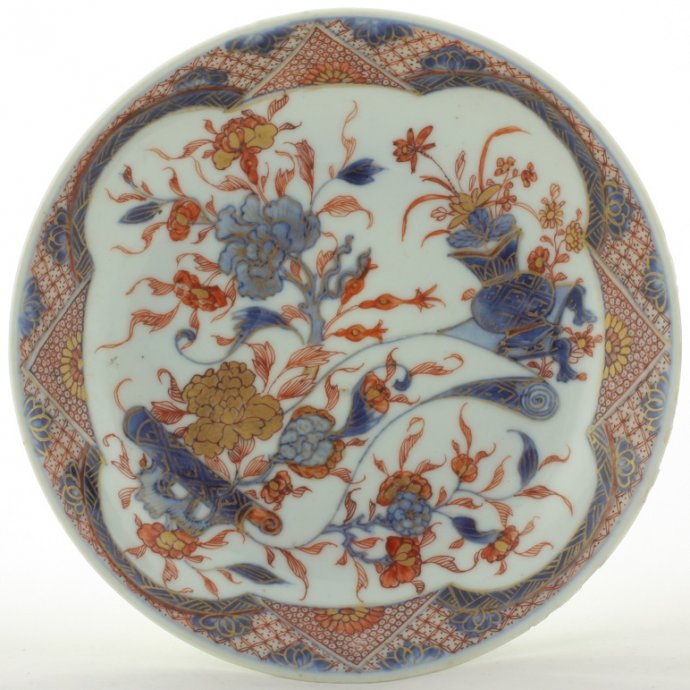 Small dish on a footring with a straight rim. Chinese Imari, decorated in underglaze blue, overglaze iron-red and gold with an open scroll showing flowering peonies  and a vase on a low table filled with flowering plant. On the sides and rim a trellis pattern border with half flower heads and triangular panels filled with a whorl pattern and half flower heads and looped bows with a zig-zag pattern in gold. The reverse is undecorated.

Condition: Some glaze rough spots to the rim. 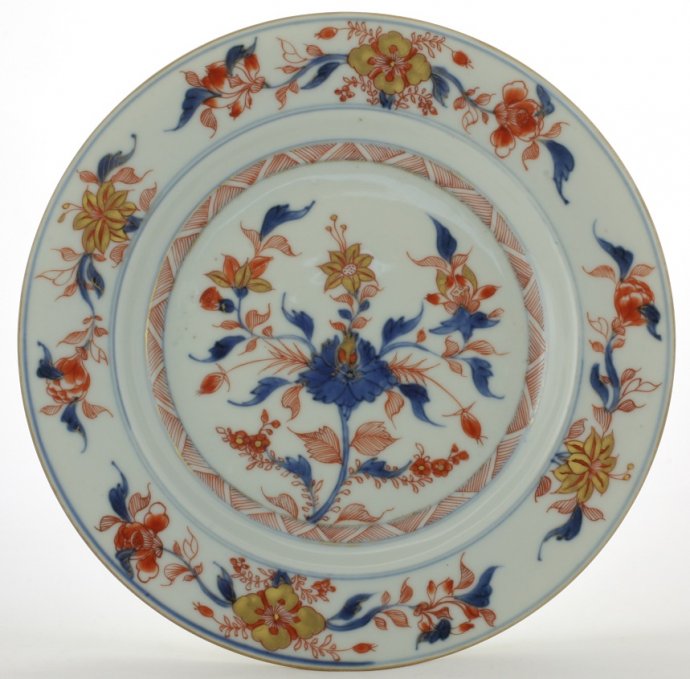 Dish on footring, flat rim. Chinese Imari, decorated in underglaze blue, overglaze iron-red and gold with  various flowering plants. On the sides a zig-zag-lines pattern border and on the rim four flowering sprays. On the reverse two flower sprays. 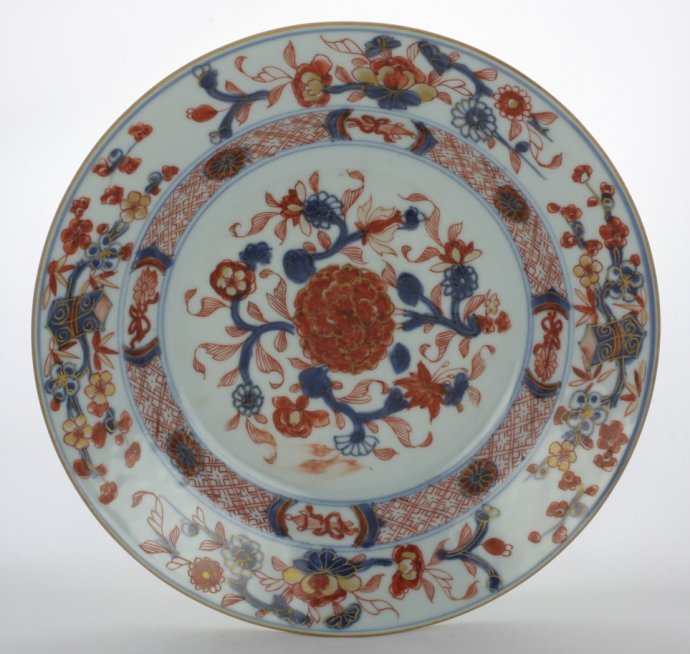 The dish used to have, as proof of quality and provenance, a paper Chien-Lung (1736-1796) period label of A.C. Beeling & Zoon B.V. Hofleverancier (seller to The Dutch Royal House), Leeuwarden on its base. Tthis label was removed by the previous owner from whom I bought the dish. The pictures of  the dish with the Beeling & Zoon B.V. label still on the dish were made and given to me by the the previous owner of the dish. (The business card of Mr. A.C. Beeling is not included in this offer).

Dish on footring, straight underglaze brown-edged rim (jia mangkou). Chinese Imari, decorated in underglaze blue, overglaze iron-red and gold with a two peony sprays one with pomegranate the other with finger-lemon fruit also called 'Buddha's-hand citron' (Citrus medica). On the rim four reserves filled with florets between scrolls on a iron-red ground with flower heads and leafy scrolls in reverse decoration. The reverse is undecorated. 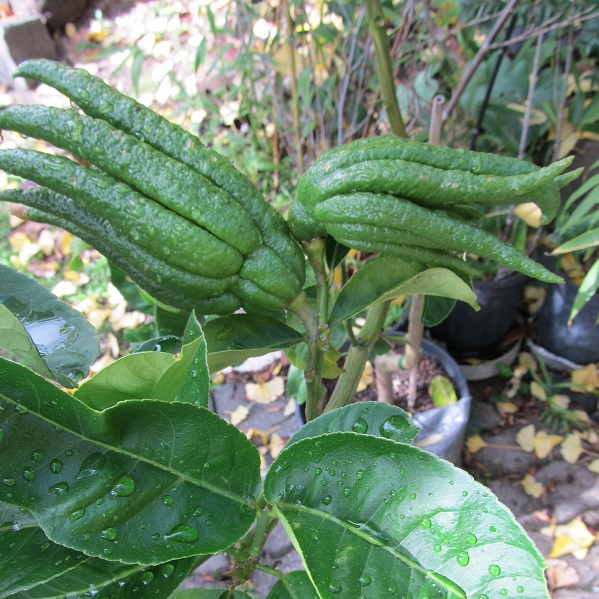 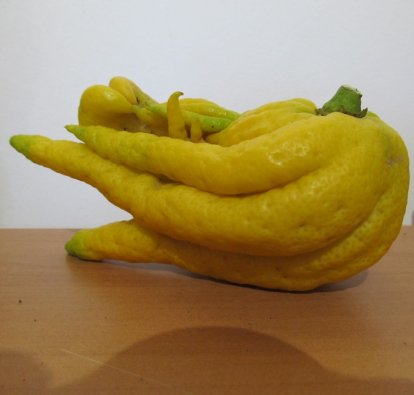 Condition: A firing flaw to the footring and a flebiate to the rim. 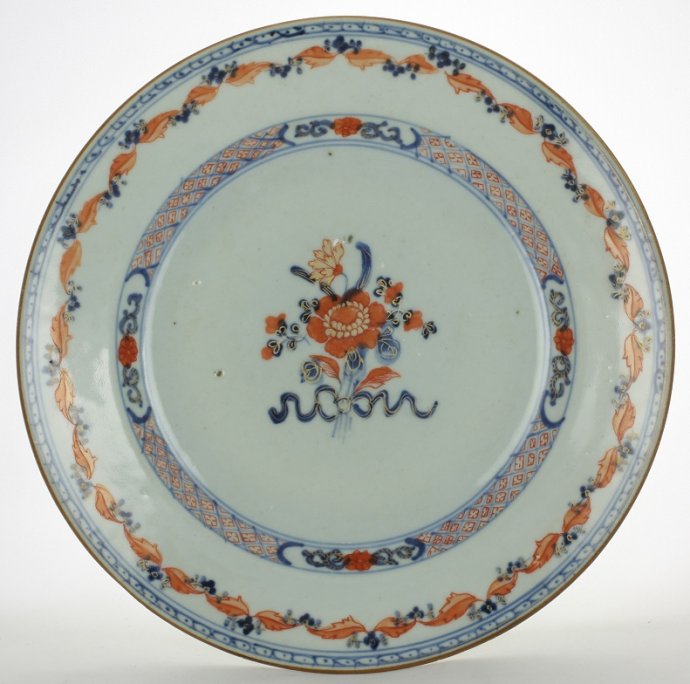 Dish on footring, flat underglaze brown-edged rim (jia mangkou). On the base a single spur-mark. Chinese Imari, decorated in underglaze blue, overglaze iron-red and gold with a flowering chrysanthemum and peony branches tied together with tassels. On the sides a trellis pattern border with four reserves filled with florets between scrolls. On the rim a continuous scroll of leaves with flower heads and a spiral pattern border. The reverse is undecorated.

Spur-marks are a rare features on Chinese export porcelain.

Condition: Firing flaws to the rim and base and two tiny fleabites to the rim. 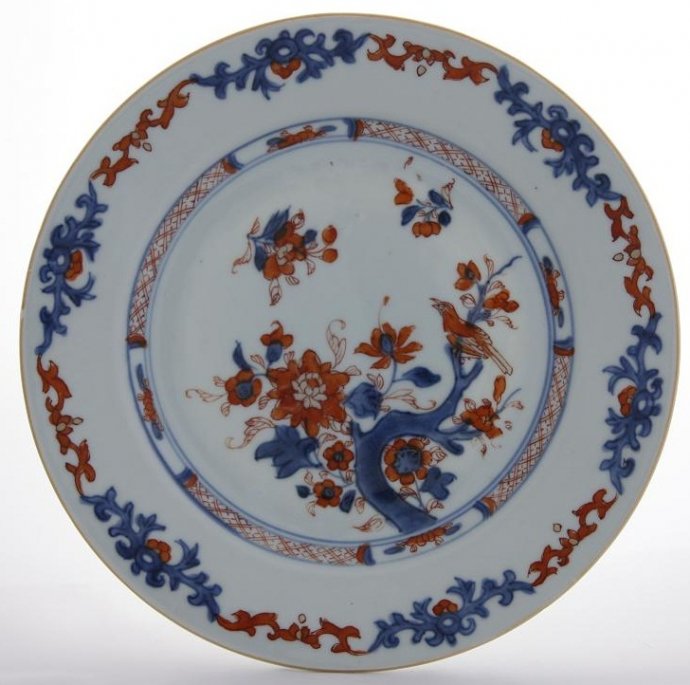 Dish on footring, flat rim. Chinese Imari, decorated in underglaze blue, overglaze iron-red and gold with a flowering peony and a bird perched on a branch. On the sides a diaper pattern border with four reserves filled with flowers. On the rim a scroll of flowering branches. The reverse is undecorated.

The floral scroll border on the rim suggest an European design as a source of inspiration for the decoration on this dish. 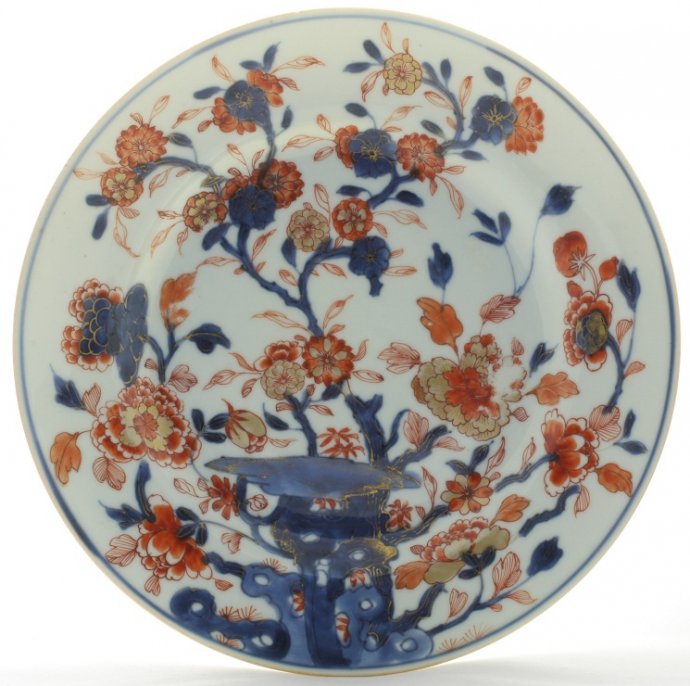 By covering the whole service (using the sides and rim as part of the overall design) the porcelain decorator used a new decorating technique letting go of the old standard ways and patterns of decorating dishes.

Condition: A tiny firing flaw to the reverse rim. 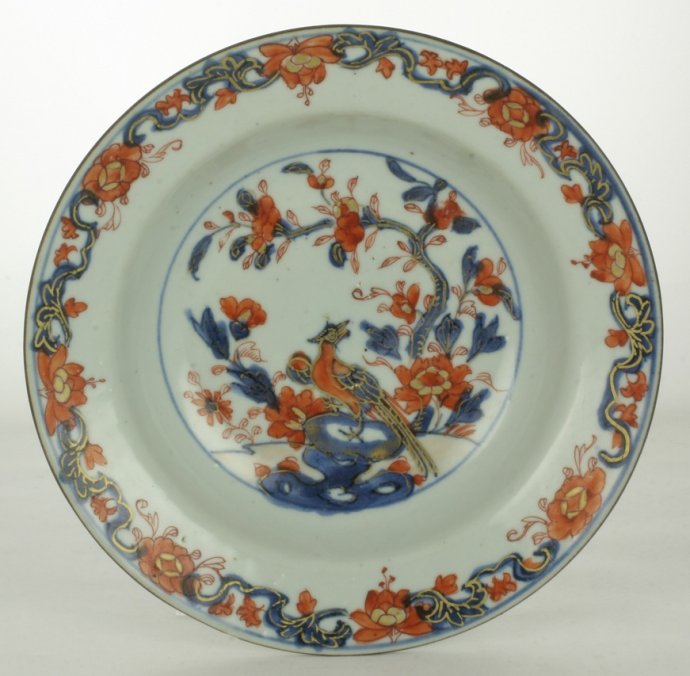 Cream dish on footring, flat underglaze brown-edged rim (jia mangkou). Chinese Imari, decorated in underglaze blue, overglaze iron-red and gold with flowering chrysanthemum and peony plants growing from pierced rockwork and a single pheasant standing on top of the pierced rockwork. Around the inner rim a scroll of foliage and flowering peony heads. The reverse is undecorated.

The pheasant on a rock is a very popular motif on export porcelain and frequently appears on enamelled and underglaze blue Kangxi wares. According to Williams, in the Chinese bureaucratic hierarchy officials of the second grade had a gold pheasant embroidered on their court robes, those of the fifth grade a silver pheasant. The bird was represented as standing on a rock, looking towards the sun, the imperial symbol of authority. (Williams 1976, pp.322-323), (Jörg & Van Campen 1997, p.157)

Condition: A firing flaw to the rim and a glaze hairline to base only visible on the reverse side.