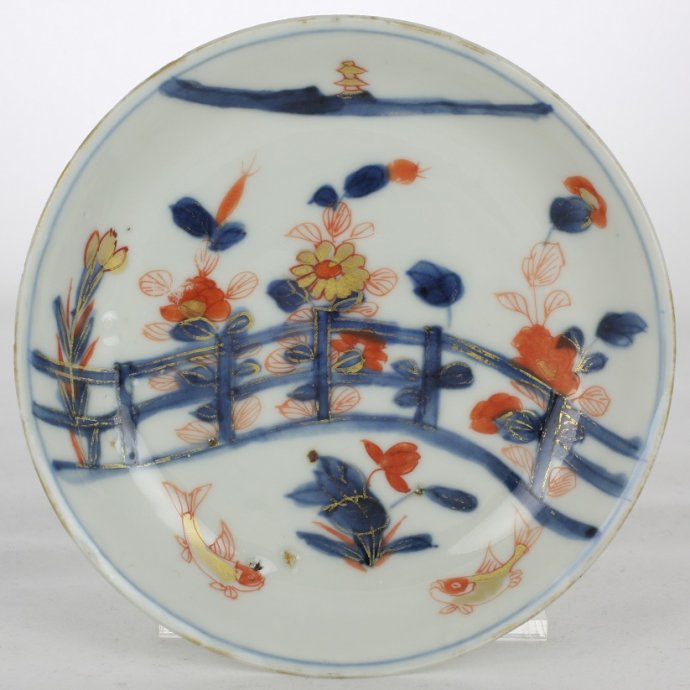 Saucer on footring, slightly everted rim. Chinese Imari, decorated in underglaze blue, overglaze iron-red and gold with in the foreground a fenced pond with two swimming fish near a lotus bud. Behind the fence flowering chrysanthemum and peony plants and in the background mountains and a pagoda. On the reverse two flower sprays.

Condition: Some glaze frits and chips to the footring. 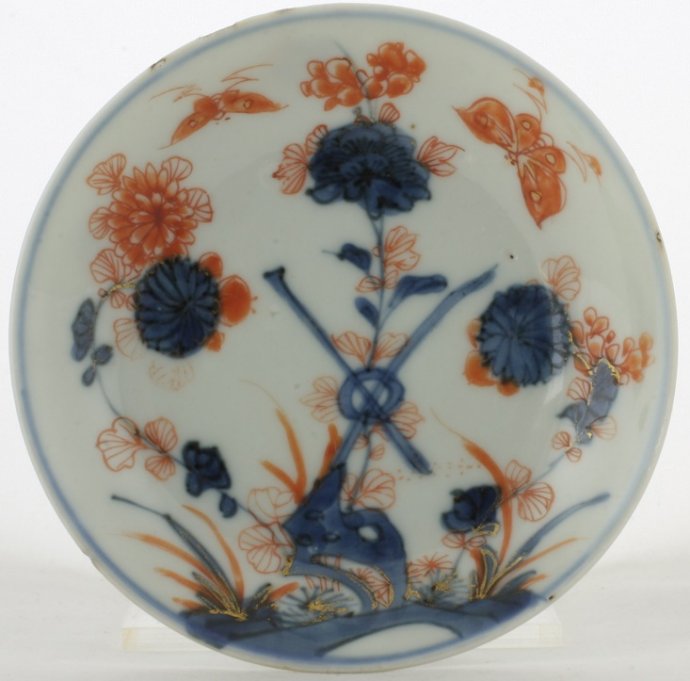 Saucer on footring, slightly everted rim. Chinese Imari, decorated in underglaze blue, overglaze iron-red and gold with flowering chrysanthemum and peony plants growing from a taihu (garden) rock and flanked by butterflies in flight. In the centre two crossed (bamboo/) reeds tied together in the middle. On the reverse two flower sprays.

The striking distinctive feature of the crossed reed is probably the Chinese decorators interpretation of Japanese zig-zag plank bridges (yatsuhashi) a decorating feature often seen on Japanese Imari porcelain. In his book Fine & Curious (page 182, cat. 224a) Jörg shows an early 18th century Japanese Imari decorated saucer from the collection of Oriental ceramics from the Groninger Museum which is very similarly decorated. 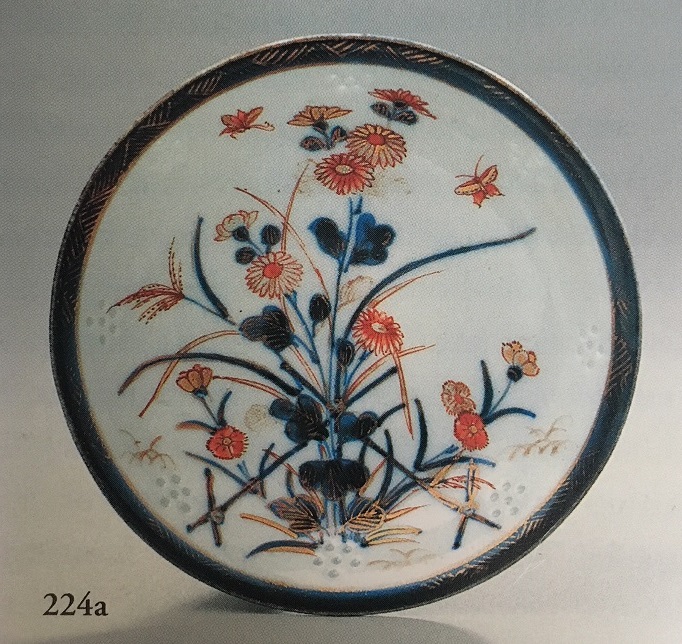 Reproduced from: Fine & Curious: Japanese Export Porcelain in Dutch Collections, (C.J.A. Jörg, Hotei Publishing, Amsterdam 2003), p.182, cat. 224a. (copyright in bibliographic data and cover images is held by the publisher or by their respective licensors: all rights reserved)

Condition: Some tiny fleebites to the rim. 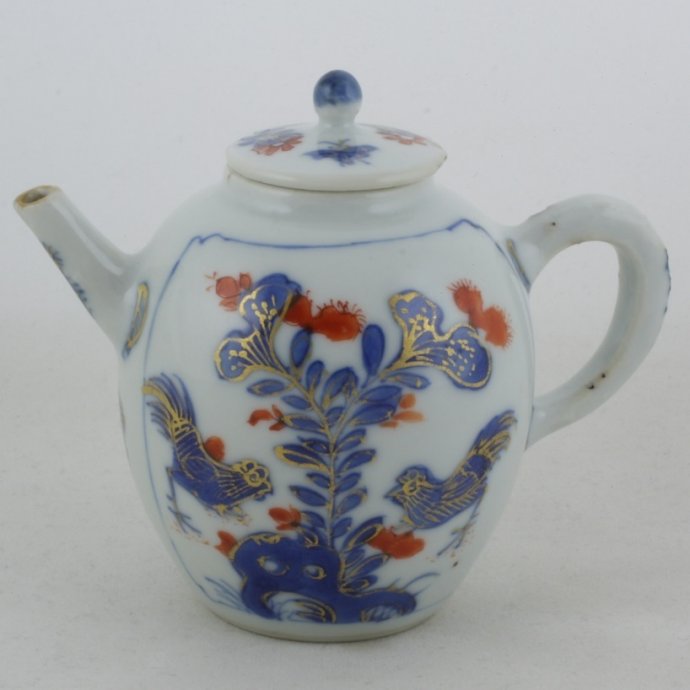 Teapot on footring, the body of elongated barrel shape, a straight spout and C-shaped handle. domed flat cover with a round knob. Chinese Imari, decorated in underglaze blue, overglaze iron-red and gold on both sides with a shaped panel filled with two cockerels facing each other separated by a flowering plant growing from a taihu (garden) rock. On the handle, the spout and In between both panels, just under the spout, a single flower spray. The cover is decorated with a flower spray and a single butterfly.

The motif of cockerels was popular on ko-akae and ko-sometsuke. The cock represents yang, the masculine principle, and a pair of fighting cocks symbolises courage and martial spirt. Bottles with this design have been found in tombs dated to 1628 and 1634. (Jörg 2011/2, p.17, cat. 6 & 7)

For other objects decorated with two cockerels facing each other, please see:

Japanese Imari was exported to Europe from the last quarter of the 17th century by the Dutch. The Chinese began copying Imari porcelain - far more cheaply, just as adeptly and in an ever larger range of shapes - in the early 18th century. The early 18th century has left little written documentary evidence of Chinese Imari. It was often entered as Japanese in inventories such as those drawn up at Dresden, whilst in shipping lists it was not described in sufficient detail to be identified. Dutch private traders began importing enormous quantities of imari of around 1720. Their shapes were likewise often geared towards European source material in silver, stoneware or glass. (Düsseldorf 2015, pp.222-223)

Teapot: Some popped bubbles of glaze, caused by the firing process, and a glaze chip to the handle.

Cover: Various chips to the rim. 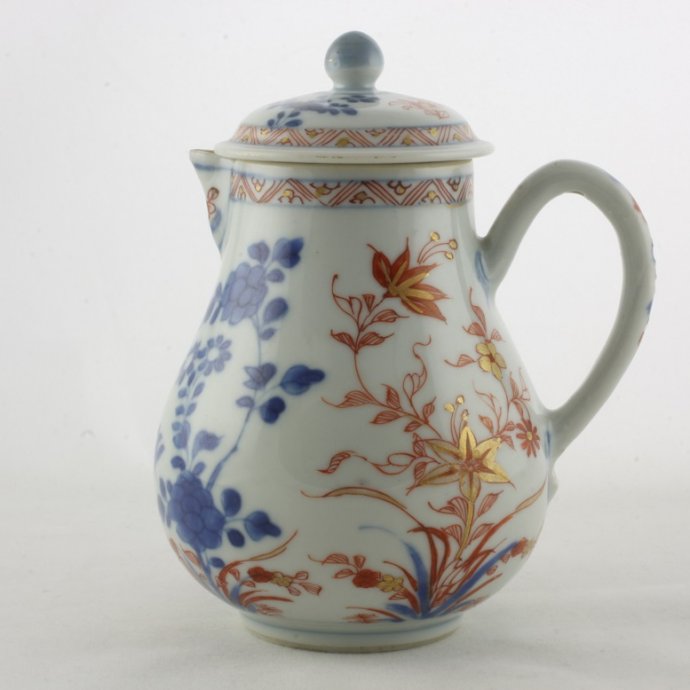 Milk jug on footring, pear shaped body with handle, small triangular spout at the rim. The C-shaped handle is placed opposite the spout. Domed cover with round knob. Chinese Imari, decorated in underglaze blue, overglaze iron-red and gold with various flowering plants. Round the mouthrim and the rim of the cover a zig-zag lines pattern border with half flower-heads. On the handle a single flowering stem. The cover has been pierced.

For an identically shaped and decorated milk jug, please see:

Condition: Two tiny fleabites to the tip of the spout and some spots of popped bubbles of glaze to the handle, caused during the firing process. 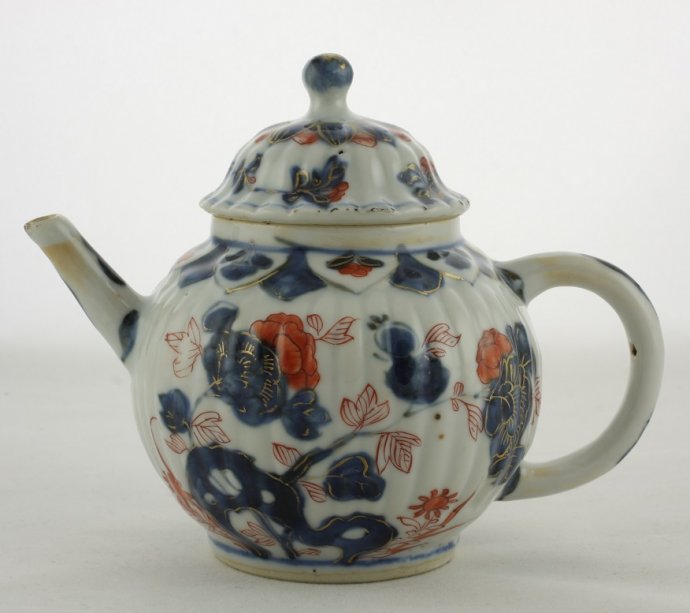 Teapot on footring, ribbed body and cover, straight spout and C-shaped handle. Domed cover with round knob. Chinese Imari, decorated in underglaze blue, overglaze iron-red and gold with flowering chrysanthemum plants growing from pierced rockwork, on the reverse side flowering peony plants also growing from pierced rockwork. Around the neck and top of the cover a lotus shaped panel border in relief filled with flower heads. On the cover two flower sprays, on the handle and spout, single flowering stems.

Condition: Two tiny fleabites to the tip of the spout, a chip to the inside of the mouthrim and some very tiny spots on the rim of the cover, caused by popped bubbles of glaze during the firing process. 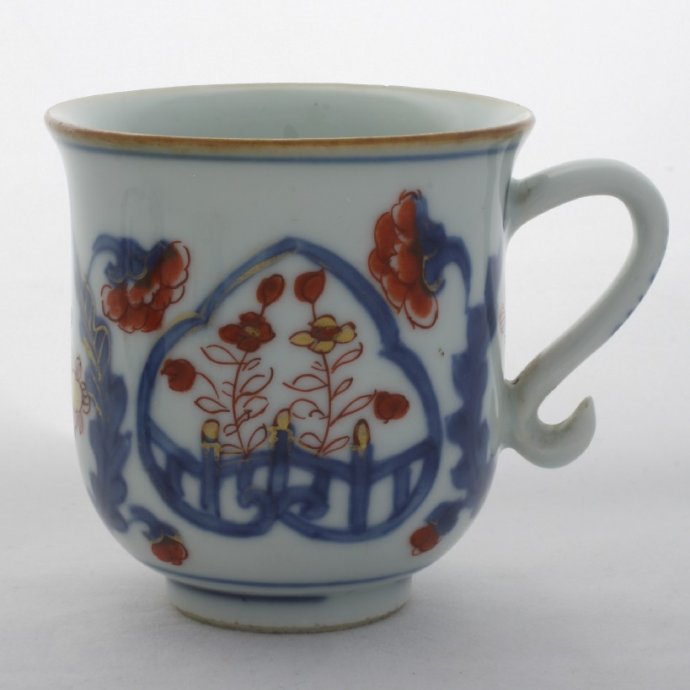 Condition: A chip to the rim and a frit to the inner footring 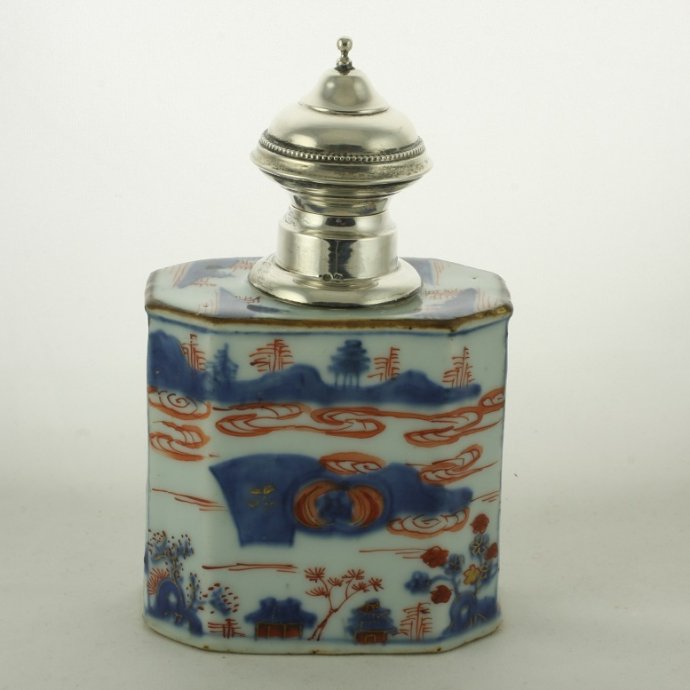 Tea caddy of rectangular form with canted corners and flat shoulder with a short upright neck. The edge in underglaze light brown (jia mangkou). Unglazed base. The original cover is missing and replaced with unmarked Dutch silver mounts. Chinese Imari decorated in underglaze blue and overglaze iron-red and gold with on the sides and top with a continuous riverscape with pagodas, trees, mountains and clouds. The silver marks explained: the marker’s mark: J3, the sword mark was used (1814-1905) as the standard mark on articles too small for the full hallmarking.

Condition: Some very tiny glaze frits to the edges. 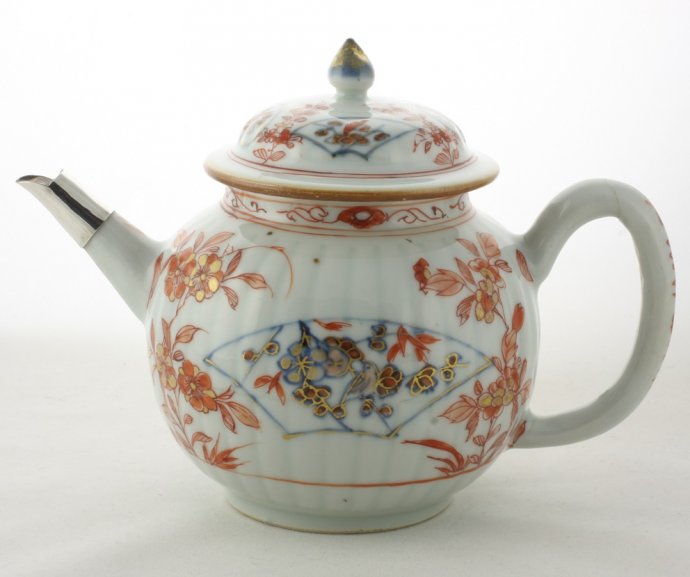 An identical teapot can be found in the collection of the Jan Menze van Diepen Foundation at Slochteren, the Netherlands (JMD-P-0850)

For a similarly shaped and identically decorated teapot, please see:

Condition: A firing tension hairline to the handle and a restored finial. 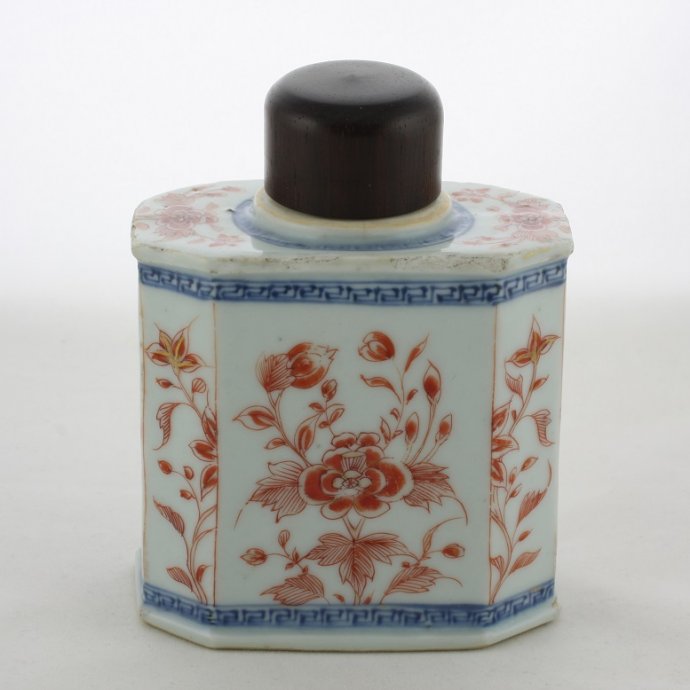 Tea-caddy of rectangular form with canted corners, a flat shoulder with a upright unglazed neck. The original cover is missing and replaced with a contemporary mahogany version. The flat base is unglazed. Chinese Imari, decorated in underglaze blue, overglaze iron-red, and gold. On the body and the flat shoulders decorated with various flowering plants. Round the foot, shoulder and neck a meander pattern border.

For an identically shaped and decorated tea caddy, please see: 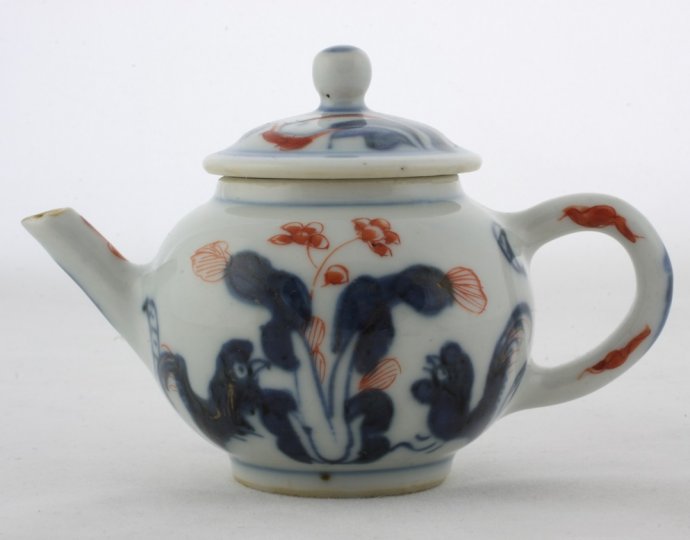 Miniature teapot on footring, straight spout and C-shaped handle. domed low cover with a round knob. Chinese Imari, decorated in underglaze blue, overglaze iron-red and gold one side with two cockerels facing each other separated by a flowering plant growing from a taihu (garden) rock, on the other side with a single plant. On the spout and handle sprays of florets between scrolls. A banana plant covers almost the entire cover.

The motif of cockerels was popular on ko-akae and ko-sometsuke. The cock represents yang, the masculine principle, and a pair of fighting cocks symbolises courage and martial spirt. Bottles with this design have been found in tombs dated to 1628 and 1634. (Jörg 2011/2, p.17, cat. 6 & 7)

For other objects decorated with two cockerels facing each other, please see:

This teapot was most likely part of a child's tea set. These toy tea sets were indeed used by children for entertaining guests at tea parties as a common element of their socialization training. Such occasions, however, would have been held under the supervision of adults. (Pardue 2008, p.2)

Condition: A firing flaw to the footring and a frit to the inner mouthrim. 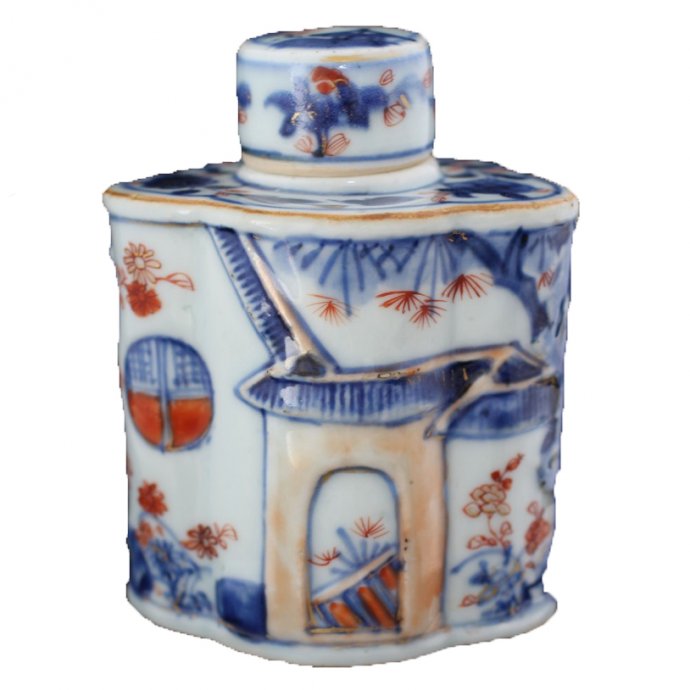 Tea caddy of moulded fan-shaped form. On the flat shoulder an unglazed cylindrical mouth with a lid fitting (original) cover. The base is unglazed. Chinese Imari, decorated in underglaze blue, overglaze iron-red and gold in low relief with four moulded panels, one with a garden wall, a porch and a window, in low relief, flowering plants and a pine-tree, two with a pavilion on a shore in a river scape in low relief and one with a bridge between two pieces of land and large rockwork with flowering plants in low relief. On the flat shoulder the unglazed cylindrical mouth is flanked by flowering plants. On the side of the cover two flowering branches and on top a pavilion near a shore with mountains in the background.

Only grown in China and Japan during the 17th Century, tea became known in the Netherlands early because the Dutch East India Company (VOC) shipped small quantities home. Its use as a beverage was established slowly, and was probably started by retired VOC employees who had become accustomed to drinking tea in the East. At a tea party, the expensive beverage was served in small teapots, one for each guest, filled with the leaves of the type he or she preferred. The tea was poured into small cups, while the teapot was refilled with hot water from a metal or sometimes ceramic kettle. (Jörg 2011/2, p.131)

Judging from its shape this tea caddy was once part of a set of seven with one centre piece surrounded by six others and probably on a matching tray. These seven individual tea caddies were filled with various blends so each tea drinker could choose the type he or she preferred.  Such a complete must have been regarded as luxury tea wares for the upper classes.

Condition: Some glaze fritting to two side edges.