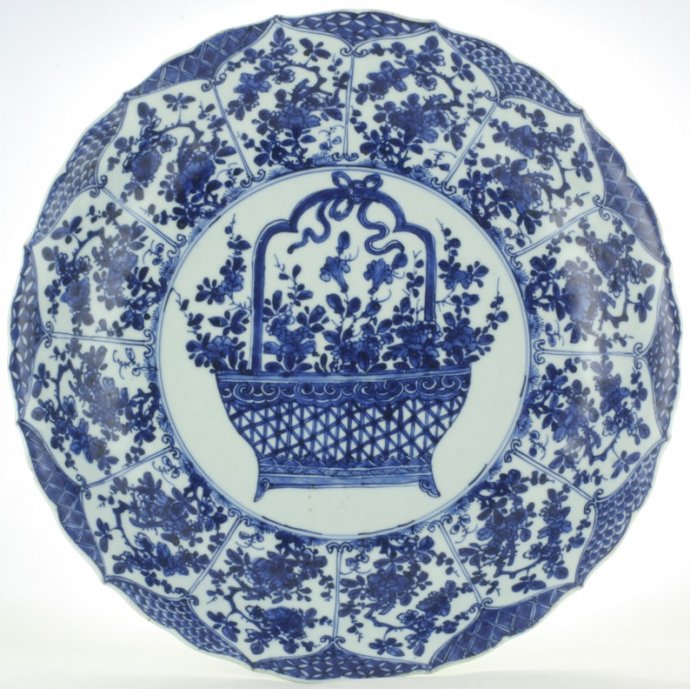 Dish of moulded form on footring with straight sides and a foliated rim. Decorated in underglaze blue with a basket containing flowering plants and hanging ribbons in a double concentric band. On the sides twelve moulded petal-shaped panels, each enclosing a flowering plant. Round the rim a trellis and scale pattern border. On the reverse three sprays of flowering branches. Marked on the base with the symbol mark: Lotus, symbol of purity and one of the eight Buddhist Emblems, in a double circle, underglaze blue.

The flower basket was an immensely popular design in the Netherlands. It was apparently regarded as very Chinese and exotic, while at the same time being recognisable and fitting in with Western imagery. The motif was often used on Delftware and in particular on "Amsterdams Bont", the Dutch name for underglaze blue or plain white Chinese porcelain, overdecorated in Delft and elsewhere in enamels. The flower basket represents Lan Cai He, one of the Eight Immortals, patron Saint of gardeners and florists. (Jörg & Van Campen 1997, p.96), (Sjostrand & Lok Lok 2007, pp. 271-278)

For an identically shaped, sized and decorated dish, please see:

Condition: A hairline and four glaze rough spots to the rim. A chip to the rim and the inner footring. 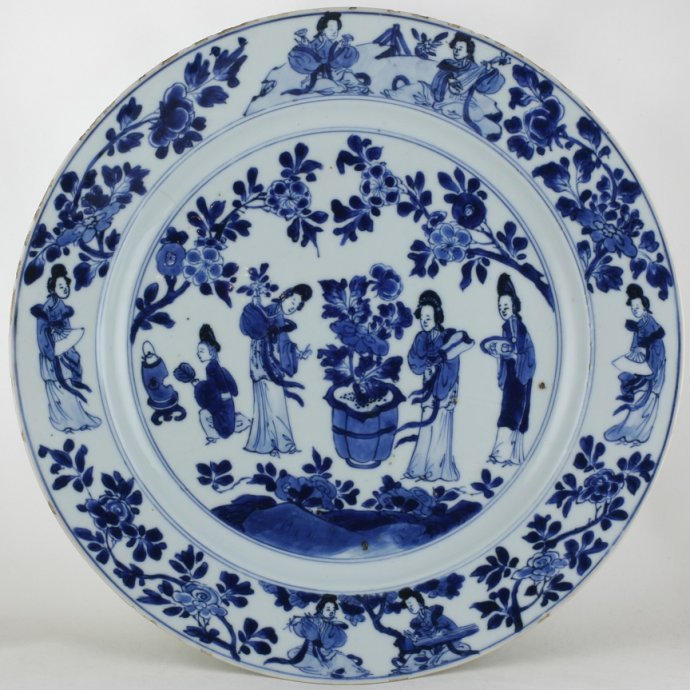 Dish on footring, spreading flat rim. Decorated in underglaze blue with a garden scene landscape with blossoming cherry trees, two roses on a small mound in the foreground. In the centre a pot with a peony. On the right a woman with a fan, another woman carrying a tray. On the left a woman with a flower spray and a servant kneeling in front of a stove. On the rim two groups of three female musicians and two pairs of women. In between the groups roses alternating with peonies. The reverse with three rose sprays. On the base a six-character Chenghua mark in a double circle.

In his Fine & Curious, Jörg compares two identically decorated dishes one Chinese the other Japanese. He states that the Japanese example was clearly copied from the Chinese Kangxi dish, but it is noteworthy that it is better painted with more attention to detail (compare the flowers) than its Chinese counterpart. (Jörg 2003/1, p.138) 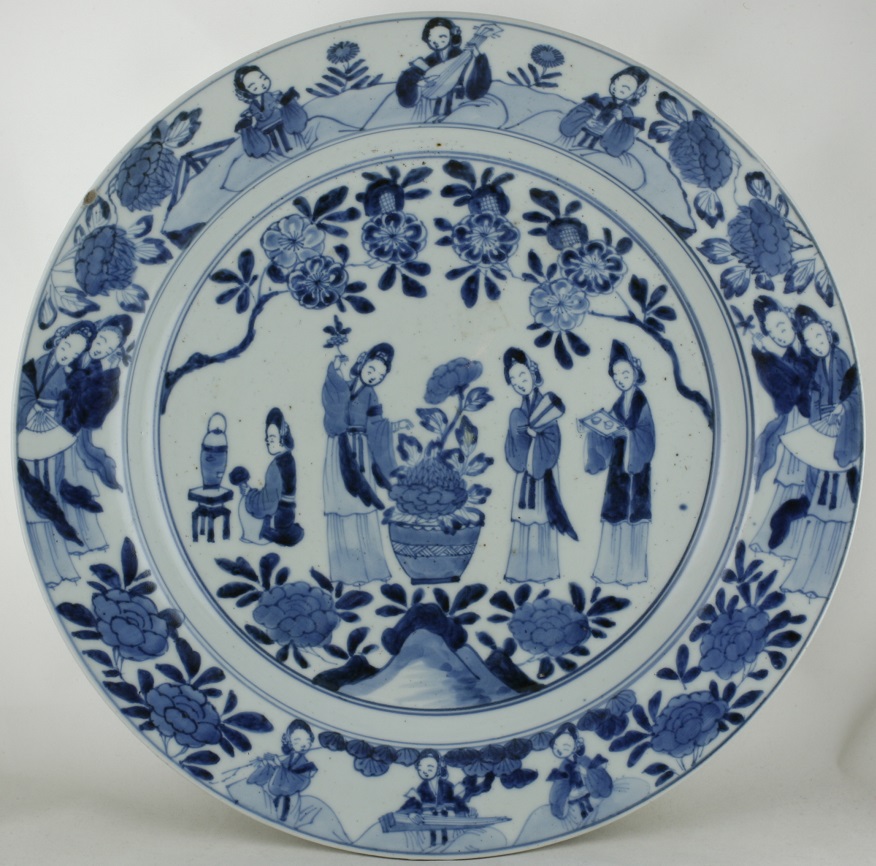 Sold object 2012442, an identically, shaped, sized and decorated Japanese dish (this dish is not included in this sale/offer.

Condition: A chip, a hairline and various glaze rough spots al to the rim. 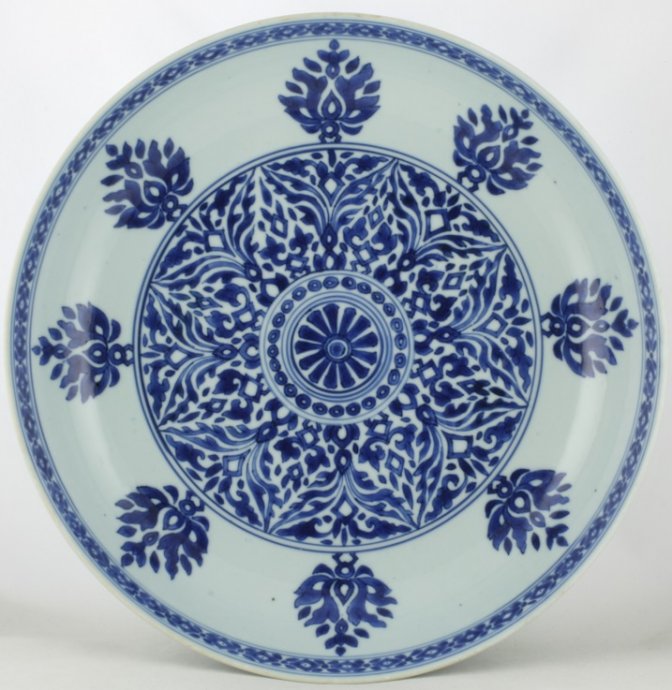 Dish on a channel footring, with spreading sides. Decorated in underglaze blue. In the centre a roundel with a formal lotus flower framed by a border with circular ornaments and surrounded by dense foliate scrolls. On the sides eight symmetrically arranged pear-shaped palmettes. Around the rim an ornamental border. On the reverse an ornamental and spear-head border. Around the footring a border of pointed and folded lotus leaves.

The decoration on this dish has an Islamic character which is usually connected with porcelain destined for the Indian, Persian or Middle-Eastern markets. The palmettes are drawn from Islamic textile art that are, for instance, familiar from Mamluk, Safavid and Mogul Indian brocades. Palmettes of this kind are also to be seen on Indian 'bidri ware' metal objects adorned with silver inlay. Such pieces have also been collected in Indonesia as well. A good variety is illustrated by Krahl & Ayers in their catalogue of the Topkapi collection, Istanbul. (Jörg & Van Campen 1997, p.137, cat. 145), (Düsseldorf 2015, p.263)

For similarly decorated objects most likely made for the Indian, Persian or Middle-Eastern market, please see:

This dish has a channel footring. It is still not known what its function may have been, but possibly the dish - filled with food or offerings - was meant to be placed on a wooden stand, which would have made it more stable. Dishes with channel footrings first appear in the 1670s and were made until c.1700; they no longer appear in 18th-century assortments. (Jörg 2011/2, p.49) 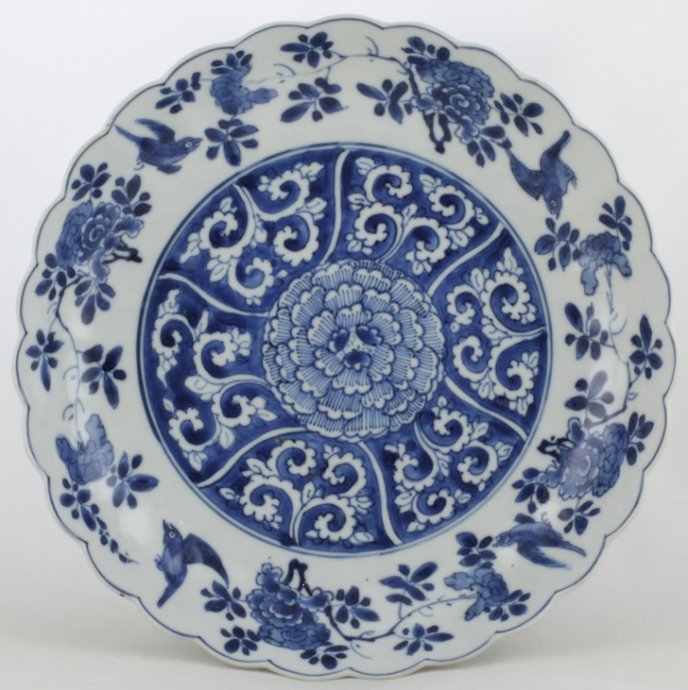 In China the peony is the king of flowers. Here the white peony may stand for a beautiful and clever girl. (Hartog 1990, p. 147)

For an identically shaped and decorated dish, please see:

Condition: A firing flaw to the inner footring. 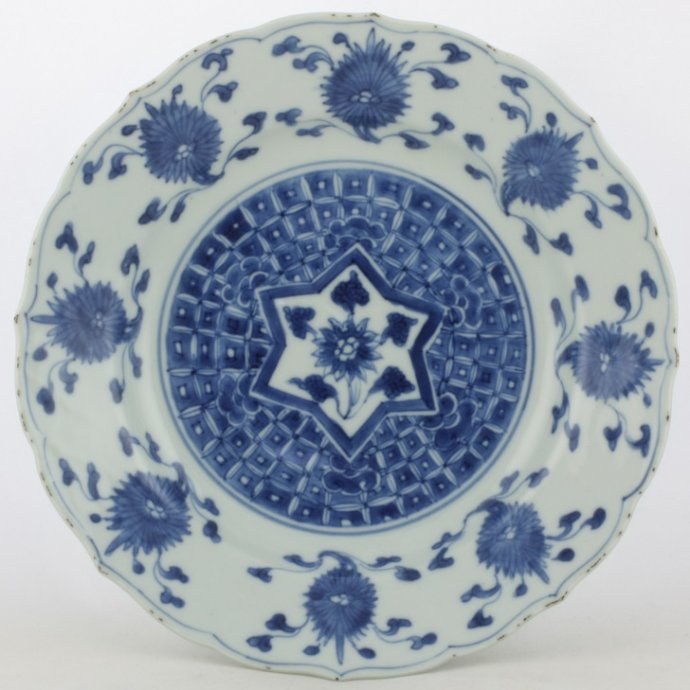 Dish on footring with a flat rim and a scalloped edge. Decorated in underglaze blue. In the centre a star-shaped panel containing a lotus surrounded by four rows of linked cash motifs. On the sides and rim eight lotus flowers and scrolls. On the reverse eight single peonies. (Jörg 2002/2, p.83)

The symmetrical decoration is characteristic of the sometimes rather rigid decorations on the late 17th-century Kangxi porcelain. The often skilfully painted scenes of landscapes and figures of the late transitional porcelain disappeared soon after the Jingdezhen kilns were restored and resumed production c. 1677. The re-implementation of the Imperial prescripts governing objects produced for the court also dictated the style of un regulated production for both the local market and export. The lotus is the Buddhist symbol of purity and love. It is impartial and therefore a highly appropriate motif having no references to earlier political situations. (Jörg 2002/2, p.83)

Condition: Various popped bubbles of glaze and a single frit to the rim, a rough footring. 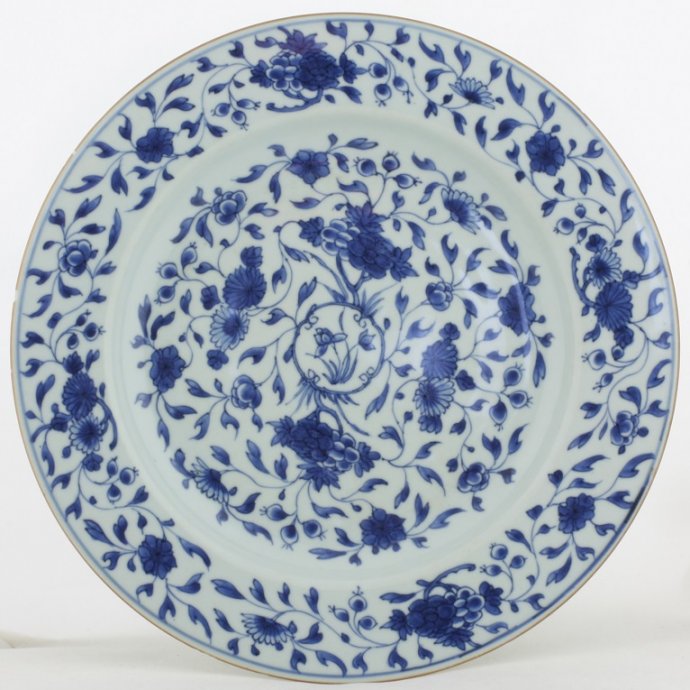 The Groote of Oranje Sociëteit (Large or Orange Society) in Zutphen was founded on 16 April 1763 and is one of the oldest societies in the Netherlands. 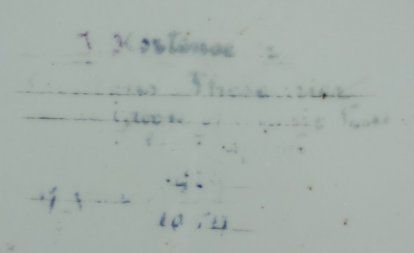 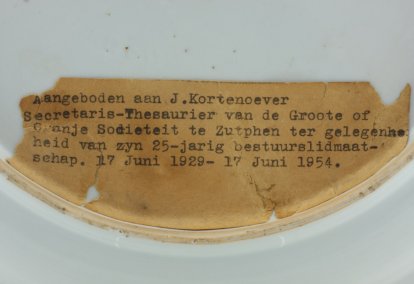 Condition: A tiny glaze chip to the reverse rim. Four frits, a chip and a glaze rough spot all to the rim . 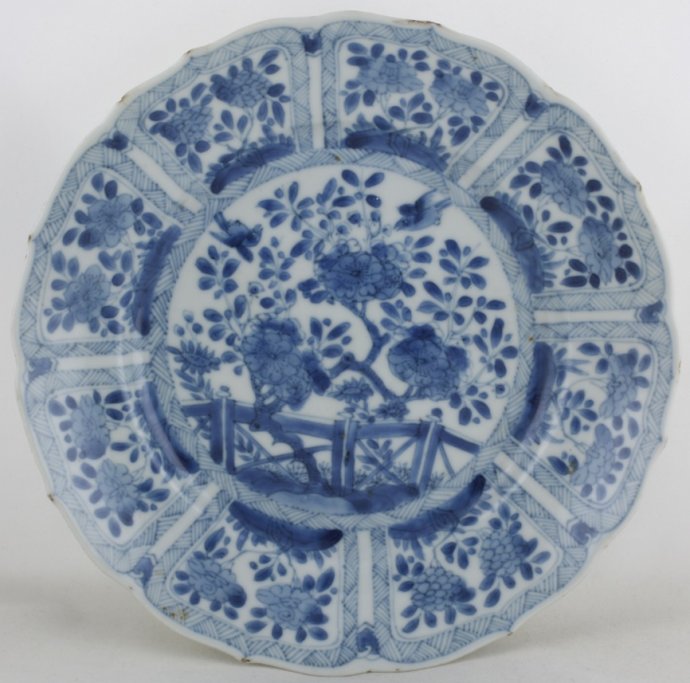 Dish on footring, flat rim with a foliated edge. Decorated in underglaze blue a lowering tree growing in front of a fence with birds in flight surrounded by a zig-zag-lines pattern border. On the sides eight petal-shaped panels, each enclosing two flowering plant outlined by a zig-zag-pattern borders connected at the rim by single looped bow. On the reverse three wide spread flower sprays. Marked on the base with the symbol mark: Ding incense burner, in a double circle, underglaze blue. On the base an old rectangular paper dealers label that reads: 'Fa. A.C. Beeling & Zn Hofleverancier (seller to The Dutch Royal House), Leeuwarden, China periode K'ang-Hsi (1662-1722) antiquiteiten'. (Davison 1994, cat. 1833)

Antiquarian A. C. Beeling & Zn was founded in 1886 by A. C. Beeling, son of Johannes Beeling, a master silversmith who had been trading in silver ever since 1864 (Leeuwarder Courant, 03-09-1973). The current A. C. Beeling is the grandson of the founder of the company. His father expanded the business, which at first mostly dealt with clocks and watches, with silver, furniture, china and more (De Telegraaf, 08-10-1993). A. C. Beeling & Zn received its Royal Warrent of Appointment in 1939 (Leeuwarder Nieuwsblad, 04-08-1939). (source: rkd.nl)

Condition: Some tiny glaze rough spots to the edge of the rim and a hairline to the rim. 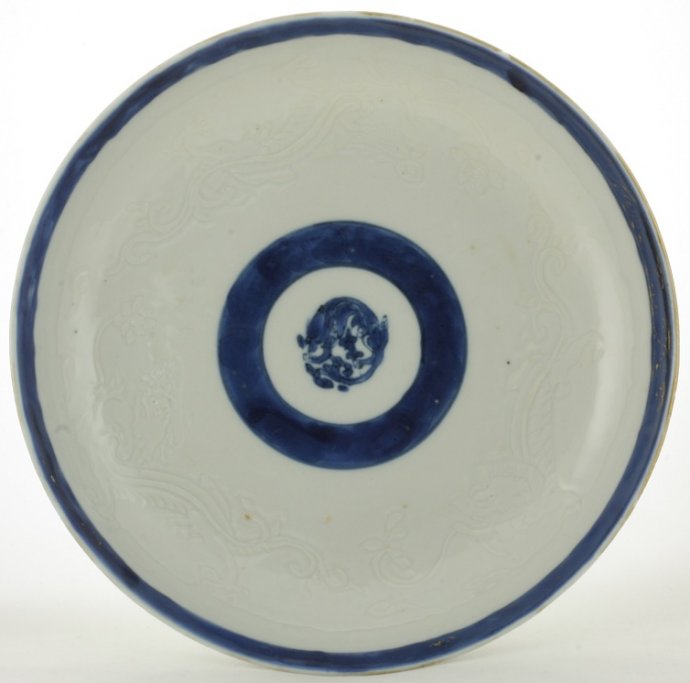 Dish on footring with a straight rim. Decorated in underglaze blue and gold with a dragon in a central wide band, On the sides three dragons have been finely incised into the porcelain. Round the rim a foliage scroll pattern border in gold on a underglaze blue ground. Marked on the base with a square shop mark in a double circle, underglaze blue

Condition: A frit with a connected hairline to the rim and a chip to the exterior footring. Heavily wear to the golden decoration but still visible in ghost form. 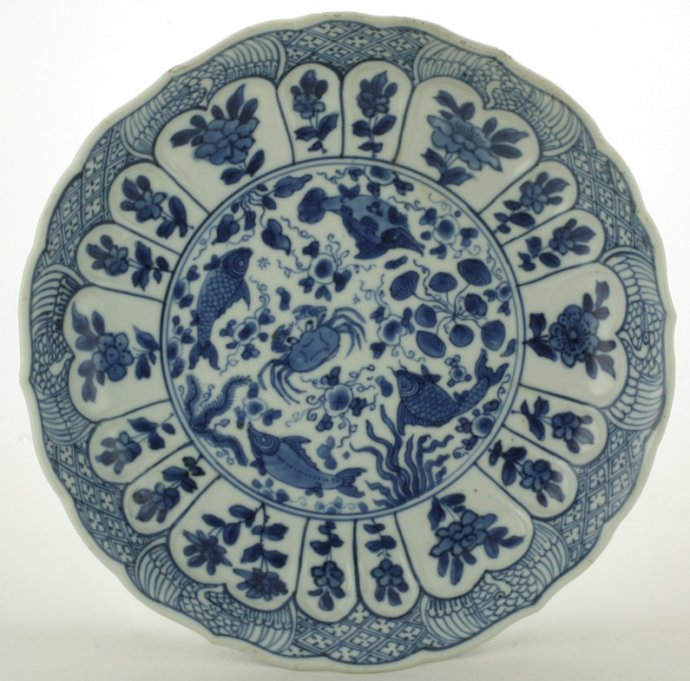 Four fish swimming into the direction of the centre might be identified as a "qing", a fresh water mullet, and "bai", a variety of carp. Carp are identified by the wide mouth and two pairs of barbels attached to their lips. The third one is a "lian", a kind of bream, and a "gui", the mandarin fish, a colourful breed of perch with a large mouth. In Chinese tradition the combination of these fish among lotus and other waterweeds stands for a character phrase, qingbai lijie, meaning unsullied and incorruptible, a reference to the Confucian ideal of the perfect gentlemen. This motif was rather unusual before the Ming dynasty (1368-1644) and became popular in the middle of the Ming dynasty. (Ströber 2011, pp.104-106)

Condition: A hairline to the rim and some tiny frits to the edges of the scalloped rim. 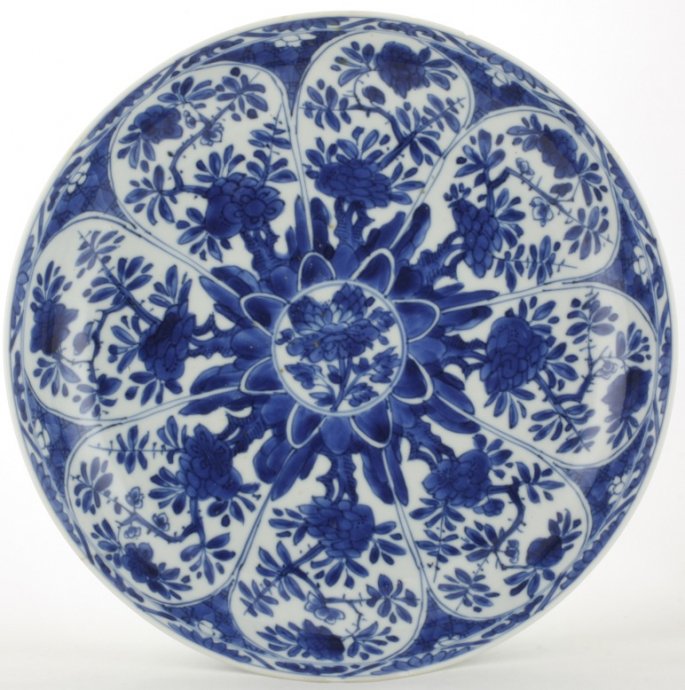 Dish on a footring, straight rim. Decorated in underglaze blue with a flowering chrysanthemum in a double concentric band. On the sides reserved on a crackled- ice motif, eight reserves, shaped as lotus petals and filled with flowering plants growing from rockwork. Around the rim a leafy scroll pattern border with reserves filled with half flower heads. On the reverse three flower sprays. Marked on the base with the symbol mark: Flower, the symbol for purity in a double circle, underglaze blue.

Condition: A fleabite, two frits, four chips and a hairline to the rim. 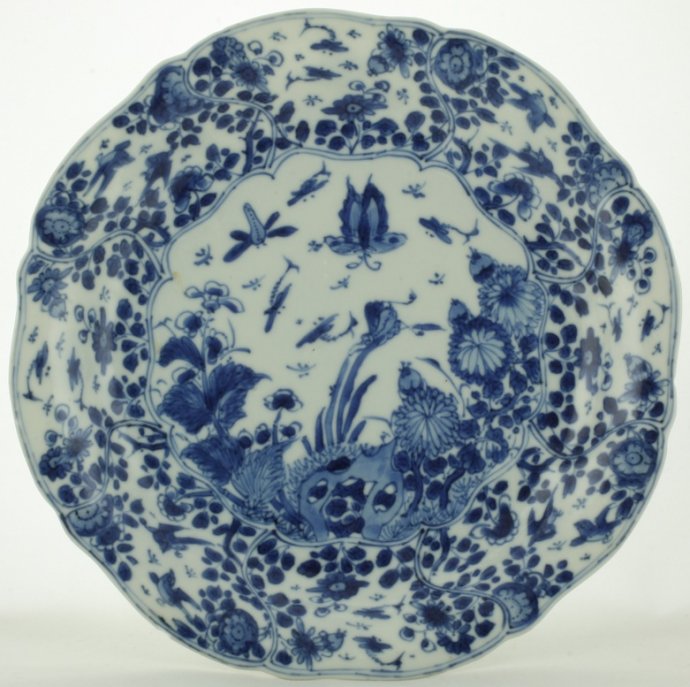 Condition: Three tiny fleabites a frit and three shallow chips to the rim. 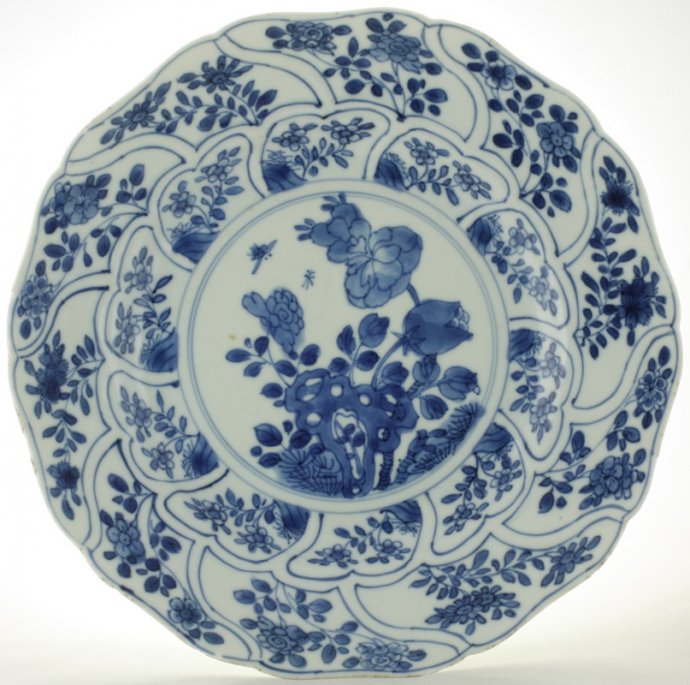 Large dish on footring, curving spirally sides and a fluted rim both with ten lobes. Decorated in underglaze blue with flying insects and flowering peony plants growing from pierced rockwork. The radiating moulded panels in the sides are filled with flowering plants. The radiating panels on the rim are decorated with flowering branches. On the reverse two large sprays of flowering branches. Marked on the base with a double circle, underglaze blue.

Condition: Some glaze rough spots, a chip and two frits to the rim. Some frits and chips to the footring. 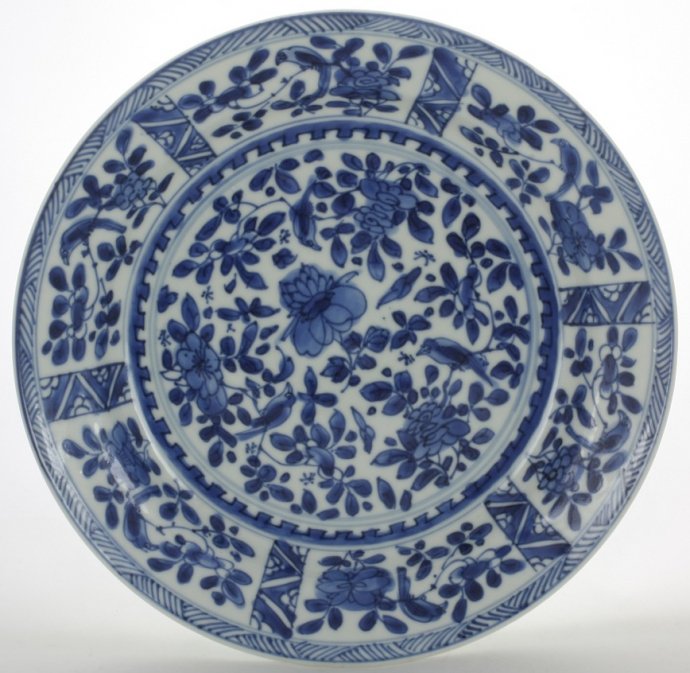 Dish on footring with a flat rim. Decorated in underglaze blue with three birds perched on flowering branches. On the sides six panels each decorated with a bird perched on flowering branches. On the rim a zig-zag lines pattern border. On the reverse three flower sprays. Marked on the base with the symbol mark: Swastika in a lozenge, a Buddhist symbol and lucky sign in a double circle in underglaze blue.

Condition: Two chips, two tiny fleabites and a hairline to the rim.