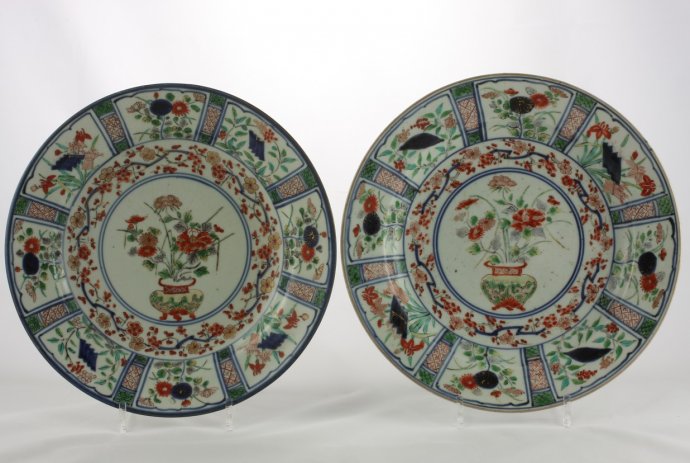 Two dishes on footrings, flat rims. On the base of dish 2011490 four spur-marks and on the base of dish 2011491 five spur-marks in a X-pattern. Both decorated in underglaze blue and enamels with in the centre a flowerpot surrounded by a band of a continuous branch of prunus blossoms. The sides and rims are divided into kraak-style panels, the large panels filled with flowering plants, the narrow ones with geometric patterns. The reverses have a continuous flower scroll in red, green and yellow. On the base of dish 2011490 an old rectangular paper label that reads: 'Papa = acheté la paire à Bruxelles en 1957 à 2.500 F. (en face de Lips)' which translates as 'Dad bought the pair in 1957 for 2.500 F. (across from Lips)'

Dish 2011490 shows a finely crackled greyish glaze that can be compared with that of a group of dishes in early Kakiemon style of the same period as this dish. This demonstrates a typical feature of Japanese porcelain, where the glaze is often but not always crackled. Dish 2011491, which originally formed a pair with dish 2011490 (see the rectangular paper label on the base) does not have the crackled glaze, which underlines that both was possible with Japanese porcelain and both were considered of equal quality. (Jörg 2003/1, pp.75-76, cat. 62 & 63)

The colour scheme of the scrolls on the reverses and the ‘light’ way of painting the leaves and flowers is still reminiscent of the early enamelled pieces. At the same time, the dense design, combination of underglaze blue with enamels and the bands in the centres already shows the early stages of the mature Imari style, which developed somewhere between 1670-1690. This was in all likelyhood stimulated by the orders from the Dutch who liked the bright colours, strong designs and complex compositions. (Jörg 2003/1, p.91)

Another hybrid style dish which offers an interesting comparison can be found in the collection of the Royal Trust (inv. nr. RCIN 58828). The underglaze blue kraak design still clearly prevails here. The enamels show an opaque, strong green and dark brick-red, which resembles the early enamels colour scheme more closely. Therefore, this piece can probably be dated slightly earlier than our dish(es).

Finally, this unusual Imari design can also be found on a finely painted copy, possibly of 19th or 20th century Japanese origin, featuring the same diameter, please see: Windsor House Antiques (Ref No. 6522). The dish also has spur-marks and an unidentified (pseudo?) mark on the back. The high quality of this dish is striking. Perhaps it was made to replace an original Japanese dish as part of a larger set? 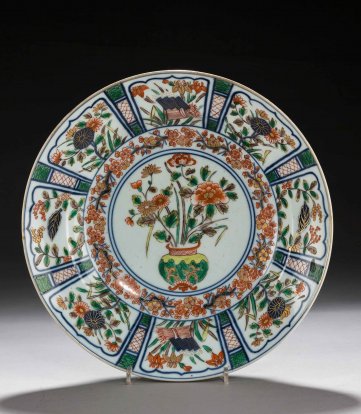 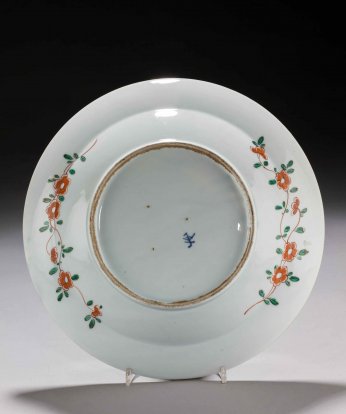 Windsor House Antiques (Ref No. 6522), this dish is not included in this sale/offer. 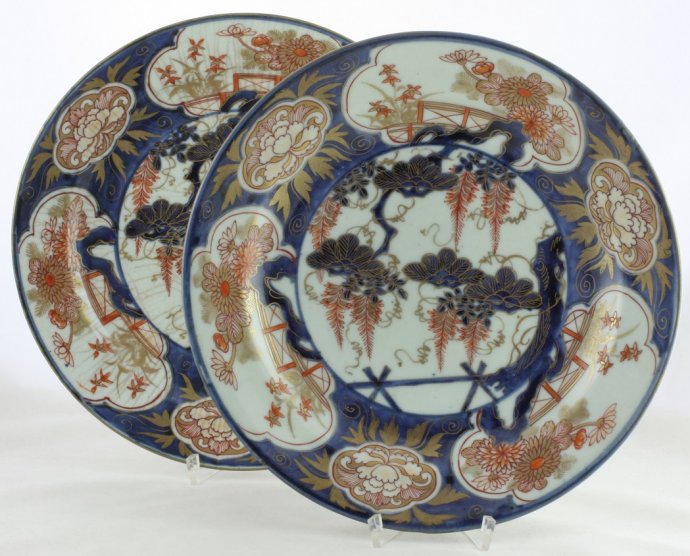 Two dishes on footrings, flat rims. On the bases three and four spur-marks. Imari, decorated in underglaze blue, iron-red and gold with a bamboo water conservation system beneath a flowering wisteria. The sides with three alternating wide and narrow shaped panels reserved on a blue ground filled with flowering chrysanthemum and peonies near a fence. The reverses with three chrysanthemum sprays.

The crackled glaze on object 2012272 is caused by the unequal contraction of the body and the glaze during cooling in the kiln after firing. (Jörg & Van Campen 1997, p.235)

Condition 2012272: Two firing flaws and fine crazing to the glaze, caused by the firing process. 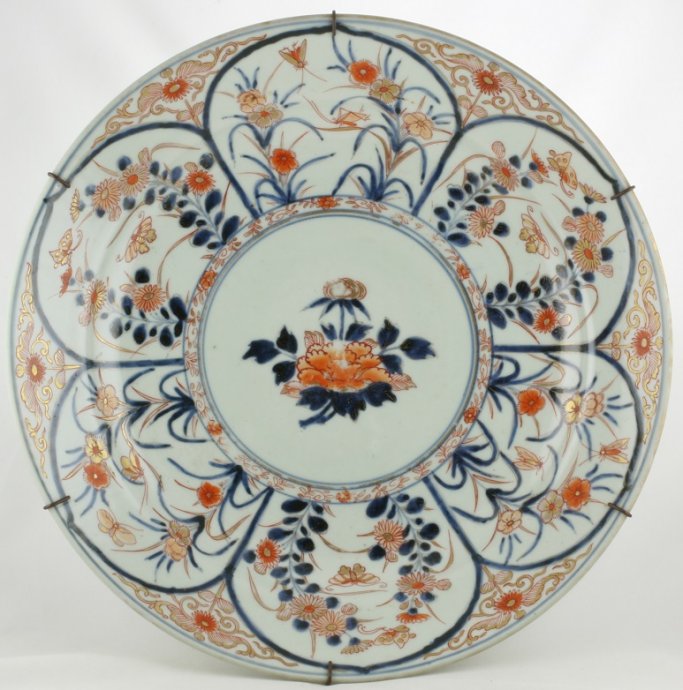 Dish on footring, flat rim. On the glazed base six spur-marks. Imari, decorated in underglaze blue, iron-red and gold. In the centre within a band of flower heads and scrolls a flowering peony spray. This is surrounded by six wide lotus-leaf-shaped panels filled with flowering plants and insects On the rim, in between the panels, a flowering chrysanthemum between scrolls. The reverse with chrysanthemum, poppy and prunus sprays. Fitted in a brass frame.

On Japanese ceramics butterflies (Jap.: chõ-chõ; Chin.:hu-tieh) are most frequently pictured in combination with the peony. This composition is of Chinese origin. It not only includes the combination of richness (peony) with happiness (butterfly) but also a rebus. Written with a different ideograph, tieh also means 'double'. The addition of a butterfly to an emblem of good fortune indicates its double effectiveness. (Arts 1983, p.124)

Condition: Some wear to the decoration. 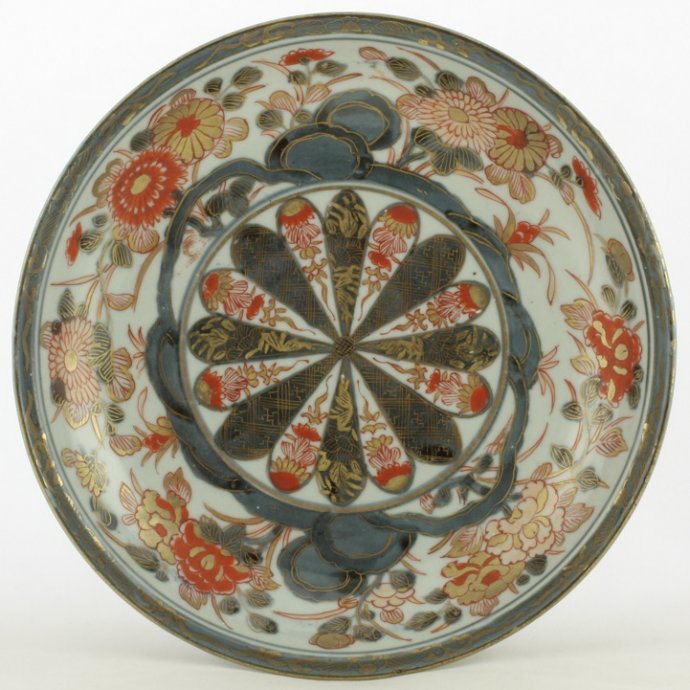 Although some types of chrysanthemum begin flowering in the summer, the chrysanthemum is primarily an indication of autumn. Like many autumn motifs the chrysanthemum evokes feelings of melancholy in Japan, as is beautifully expressed in a poem by the 9th-century Ki no Tomonori:

tsuyu nagara / to wear in my hair

kiku no hana / with dew still clinging to it

aisenu aki no / oh may this present 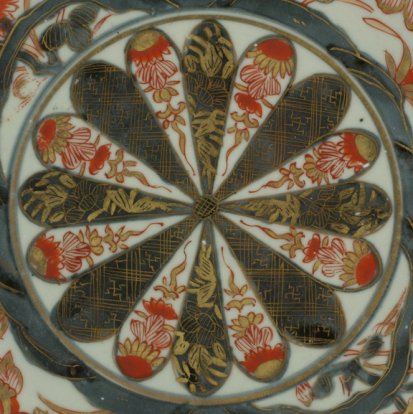 Despite the chrysanthemum's status as a symbol of the Japanese imperial house, this meaning is only relevant when a 'sixteen'-fold double chrysanthemum', the stylized family crest (mon), is placed prominently and singly on an object.

For a dish with a similarly large central chrysanthemum crest, (kiku no mon), formerly part of the Dresden collection formed by Friedrich August or August the Strong, Elector of Saxony and King of Poland please see:

Condition: A hairline and a popped bubble of glaze (caused during the firing process) to the rim. 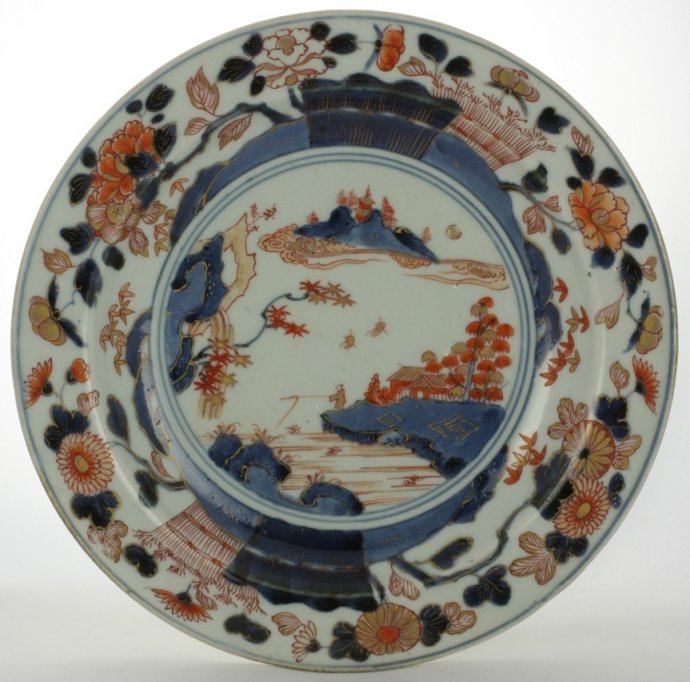 Exhibited: The Asian Galleries Reinmagined - Color Across Asia held from 21 December 2016 to 13 May 2018 at the Ackland Art Museum, The University of North Carolina at Chaphil Hill, The United States of America, Object Guide no. 5.

Dish on footring, flat rim. On the base four spur-marks in an Y-pattern. Imari, decorated in underglaze blue, iron-red and gold with man fishing on a riverbank near a pagoda, trees and two sailing boats, on the left a waterfall with bamboo trees both originating from rockwork, On the horizon a mountain landscape with pagodas trees, clouds and the sun. On the sides and rim rocks from which flowering peony and chrysanthemum plants grow from behind brushwood fences. On the reverse a continuous wide spread flowering prunus scroll. 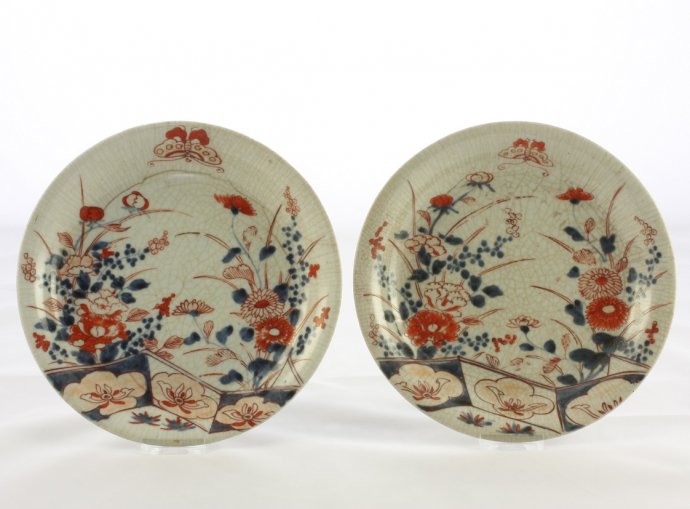 Two dishes on footrings,  slightly everted rims. Imari, decorated in underglaze blue, overglaze iron-red and gold with flowering peony and chrysanthemum plants growing from behind a fence and a single butterfly in flight. On the reverse three flowering prunus sprays. Crackled glaze on both dishes.

This specific design was (later) also used in China, for an example of a similarly, in Chinese Imari decorated dish, please see: 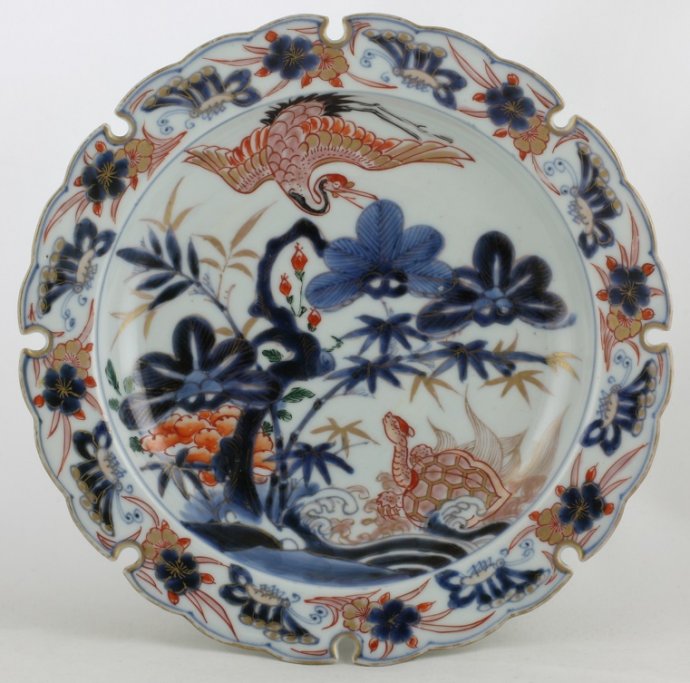 Dish on footring with a spreading flat scalloped rim and eight recesses to the edge. On the base six spur-marks. Imari, decorated in underglaze blue, iron-red and gold with a crane in flight just above a pine tree and various plants growing near a shore with a tortoise rising up from out of the water. On the rim a butterfly alternating with flower sprays. On the reverse three flower sprays.

On Japanese ceramics the tortoise is often depicted in combination with the crane (Q.V.), the design known as tsuru to kame. This combination is emblematic of good fortune and happiness. It refers to a famous legend in which two lovers eventually changed into a crane and tortoise and journeyed together to the realm of the Immortals. The tortoise shell motif is one of the oldest decorative motifs in Japanese art.  (Arts 1983, p.118)

The crane (tsuru), the tortoise (minogame), the pine tree (matsu) and the butterfly (chõ-chõ) are all symbols of longevity.

Ten different forms of tortoise are said to exist, the chief of all being the divine tortoise (shin kame), conceived by thought and attaining an age of thousand years or more. At the age of 500 years certain plants would grow upon its shell, which, streaming backwards as it swims about, would give it the well-known appearance of a long-haired tortoise, also known as the 'raincoat' tortoise (minogame), because its resemblance to a peasant's straw raincoat. The Japanese say that the tortoise has inscribed on his back the roku-jõ (six cardinal virtues) namely: chi (wisdom), yú (friendship), gi (fidelity), jin (charity), shin (sincerity) and kan (contemplation), an old idea borrowed from the Chinese.  (Arts 1983, p.117)

The shape of this dish is that of a snow flake roundel, (yukiwa-gate). A European influence could very well be possible as the border is not dissimilar to that of Monteith bowls. These dishes come in various sizes and were produced for export most likely by the Higuchi kiln and the Hokaoyama kiln. Usually the Higuchi kiln examples tend to be of poorer quality porcelain than the Hokaoyama examples, but the pattern seems closer to those from the Higuchi kiln. (I am indebted to Mr. T. Coram for this information)

Identical dishes are in the Kyushu Ceramic Museum, the Usui Collection and in an English private collection.

One occasionally finds bowls with this form, for an example, please see:

Condition: Some wear to the green enamel.