Blue and White wares since 1722 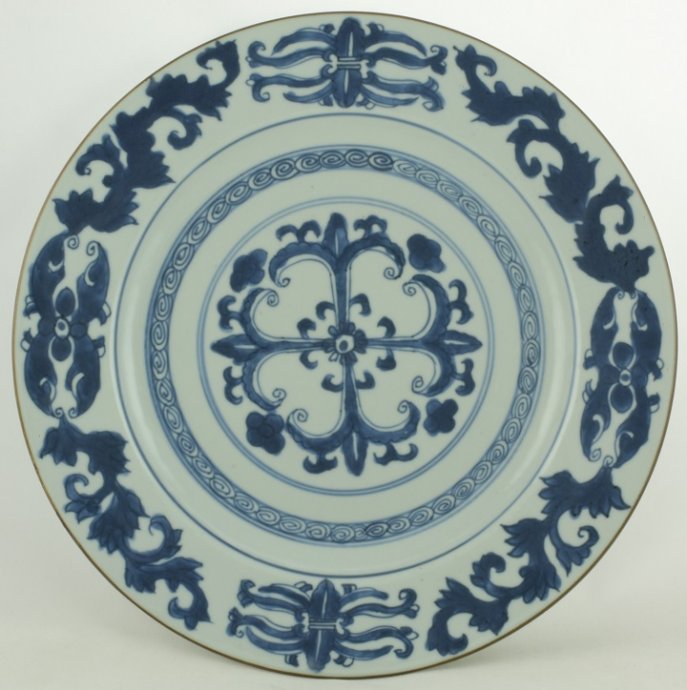 Vajra is a Sanskrit word meaning both thunderbolt and diamond. Additionally, it is a weapon which is used as a ritual object to symbolize both the properties of a diamond (indestructibility) and a thunderbolt (irresistible force). The vajra is essentially a type of club with a ribbed spherical head. The ribs may meet in a ball-shaped top, or they may be separate and end in sharp points with which to stab. The vajra is used symbolically by the dharma traditions of Buddhism, Jainism and Hinduism, often to represent firmness of spirit and spiritual power. The use of the vajra as a symbolic and ritual tool spread from India along with Indian religion and culture to other parts of Asia. This dish was probably meant for the Indian market and not for the Western market. (Wikipedia) 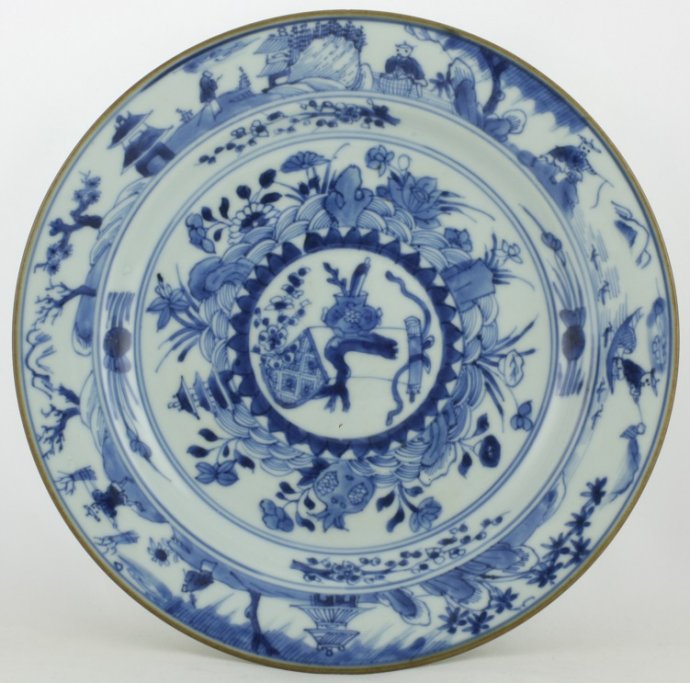 Dish on footring, convex centre and flat underglaze brown-edged rim (jia mangkou). Decorated in underglaze blue on the convex centre with a vase and a flower spray on a rolled out bookroll surrounded by a pointed leaves-pattern border with waves, rocks, a pagoda, flowering plants and a pomegranate. On the sides four groups of flowering plants. Around the rim a continuous decoration of figures in a landscape engaged in various stages of a duck hunt. On the reverse two flower sprays.

In the collection of the Rijksmuseum Amsterdam are three Chinese Imari decorated dishes with rising convex bases. This type of dish, called a boter bord or 'butter dish' in the Netherlands, is also found in Delft earthenware. Besides a large knob of butter, this specific shape with its raised middle section could also be used for milk-puddings, savarin cakes and similar baked products served with butter or syrup sauces.

Condition: A frit and a hairline to the rim, some shallow frits and chips to the footring.

(the $ and £ prices are approximates and depend on the € price exchange) 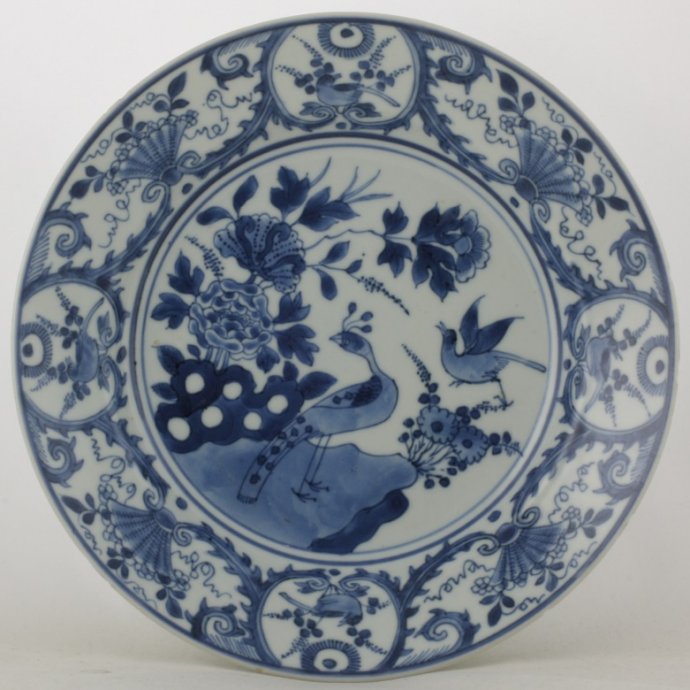 Condition: Some glaze rough spots frits, fleabites and a chip to the reverse rim. 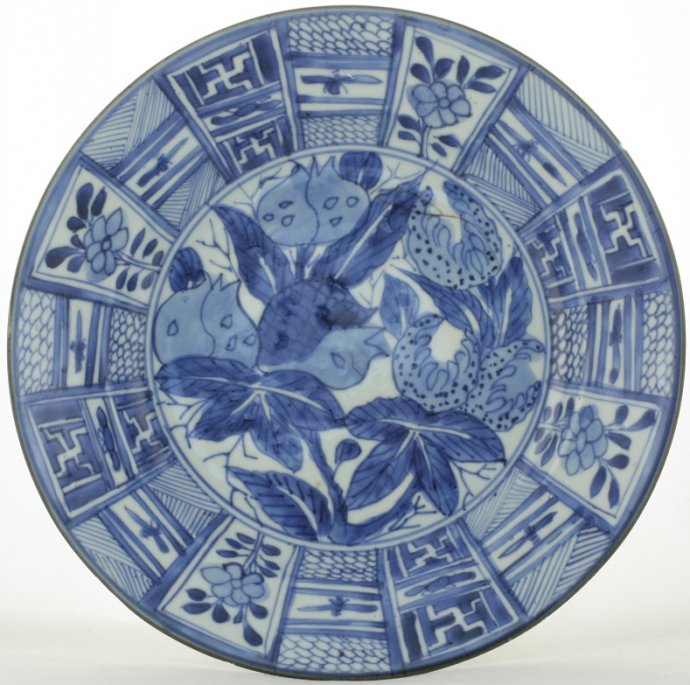 The dish shows a simplified kraak decorative arrangement. Both decorative elements, pomegranates and 'Buddha's-hand citron' (Citrus medica), can also be found on Japanese blue and white Arita dishes from the Edo early period (1615-1703), c.1660-1680. Although the decoration on this dish is reminiscent of kraak, the undecorated reverse, is not. 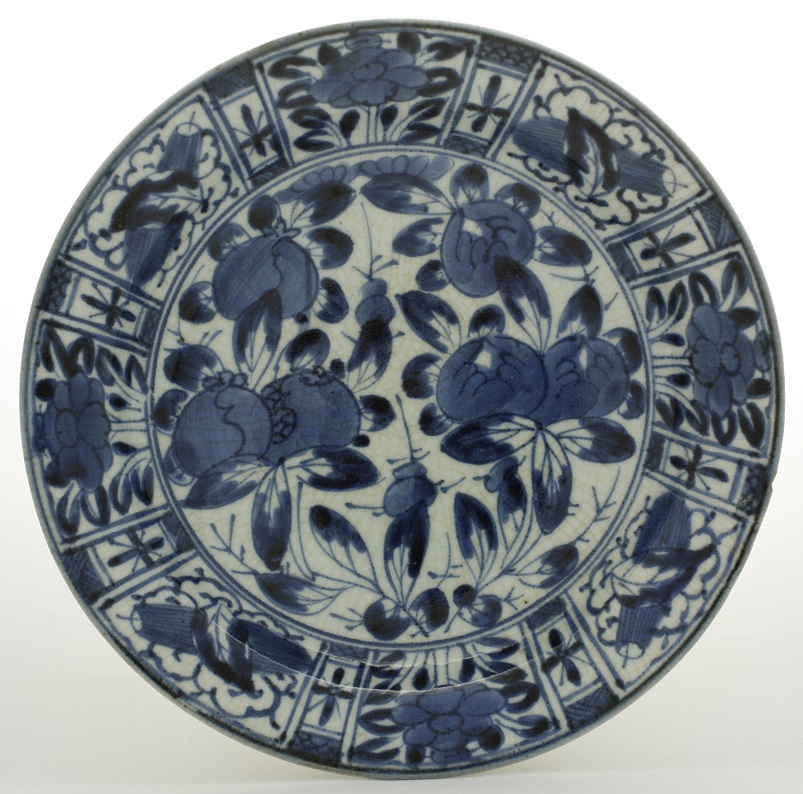 In the cargo of the Ca Mau shipwreck, c.1725 a series of five, identically decorated, dishes were found together with a series of dishes decorated with the Chine de commande 'Scheveningen design'. Both original designs were traditionally made in Arita Japan 1660-1710 for the Dutch. These dishes were so popular that Chinese potters copied them in order to compete with the Japanese. Such copies were already known, but the occurrence in the Ca Mau made it likely that these dishes that these dishes, and therefore most of the porcelain cargo, were destined for Batavia because only the Dutch would appreciate such specific Chine de commande pieces. (Amsterdam 2007, p.17 & p.179)

In 1675 rebel armies swept across Jingdezhen, burning the greater part of kilns in the area to the ground. Five years later the Kangxi Emperor controlled the southern provinces, thus uniting China under his rule. In 1680 the young Emperor expressed his personal interest in the industry of the region by appointing a commission to study the problem of how best to rebuild the ceramic industry in the Jingdezhen area. Trade with the Dutch resumed in 1681. In 1682 the first of a series of able superintendents was appointed to establish and direct a kiln complex organized on an industrial basis which enjoyed Imperial patronage. A few decades after the restoration of the Jingdezhen kilns, some porcelains were still decorated with the kraak motifs which had been so popular during the late Ming Dynasty. Kraak copies produced at Jingdezhen during the last twenty years of the seventeenth century and the first decades of the eighteenth century no longer have grit adhering to the footring or chatter marks on the bases. Rims are not foliate but straight or carefully scalloped with the glaze adhering perfectly without forming the moth-eaten edge so typical for earlier Kraak wares. (Rinaldi 1989, pp.230-232, Pl.293)

The pomegranate, Punica granata, is a Buddhist sign. The fruit is supposed to represent the essence of the favourable influence believed to exist in the pomegranate tree. A twig of the pomegranate is sometimes used instead of willow for sprinkling water. The pomegranate, as in ancient Greece, is, also owing to its numerous seeds, an emblem of posterity. (Williams 1976, pp.332-333) 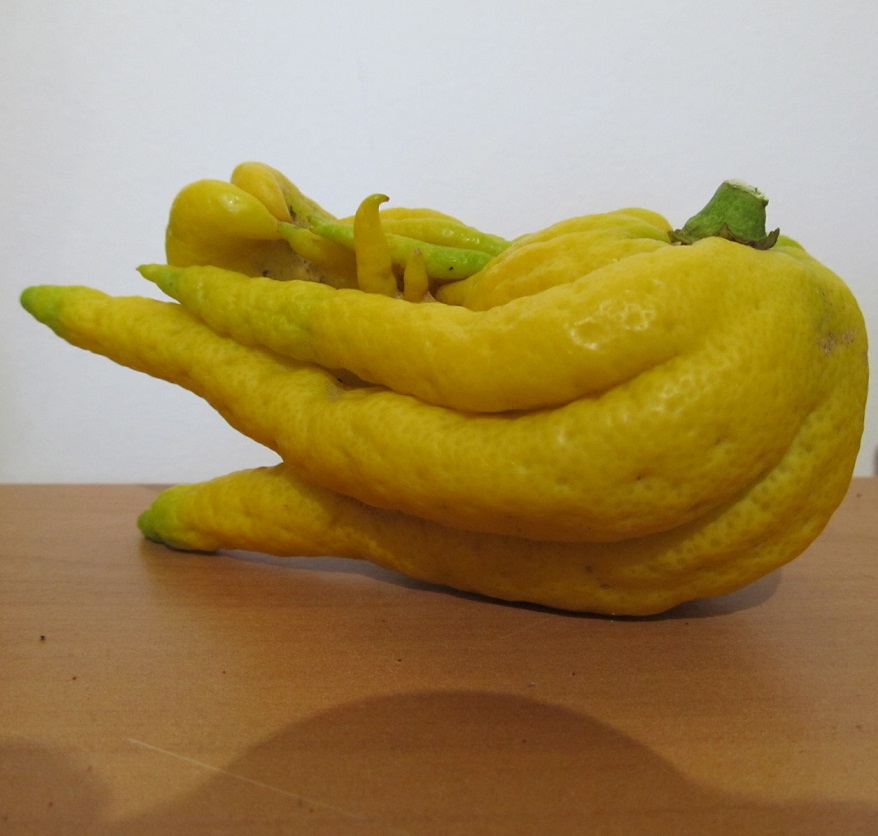 The 'Fingered citron or Buddha's hand' (Citrus medica) is a small, open citrus with distinctive fruit, native to the foothills of the Himalayas. Around 320 BC, Greeks and Romans used the fruit as a source of fragrance and the leaves as a moth repellent. The fruit has also been used for centuries to perfume clothes and rooms, as ornaments in religious ceremonies and is appreciated for its medicinal qualities. This explains why the Chinese treated it as a precious decorative object in the old days. When the pomegranate ripens it opens up and exposes lots of seeds inside. Chinese people like its pretty appearance, signifying many offspring /children to come. (I am indebted to Mr S. Fan for this information)

Condition: A firing flaw, a frit and a chip to the rim. A hairline and a firing flaw with two connected hairlines to the base. 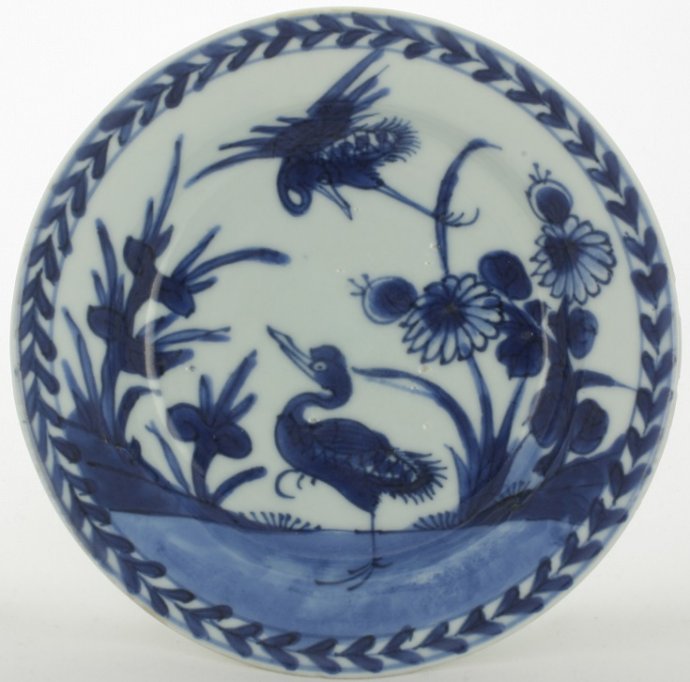 Saucer on footring, flat rim. Decorated in underglaze blue with two courting cranes. Round the interior rim a stylized laurel leaves pattern border. The reverse is undecorated. The matching teacup is missing.

The crane (Grus montignesia) itself is an auspicious symbol, representing longevity and wisdom. They accompany Daoist immortals (xian, hsien) bringing from The Isles of Paradise the tablets in their beaks. A pair of cranes symbolizes 'Long Marriage' as cranes mate for life. (Pijl-Ketel 1982, p.279)

Among the ceramic cargo of the Ca Mau shipwreck (1725) almost identical shaped and decorated teacups and saucers with the so-called 'Courting Cranes' pattern were found. (Amsterdam 2007, pp.116-117)

Condition: A hairline and two frits to the rim. 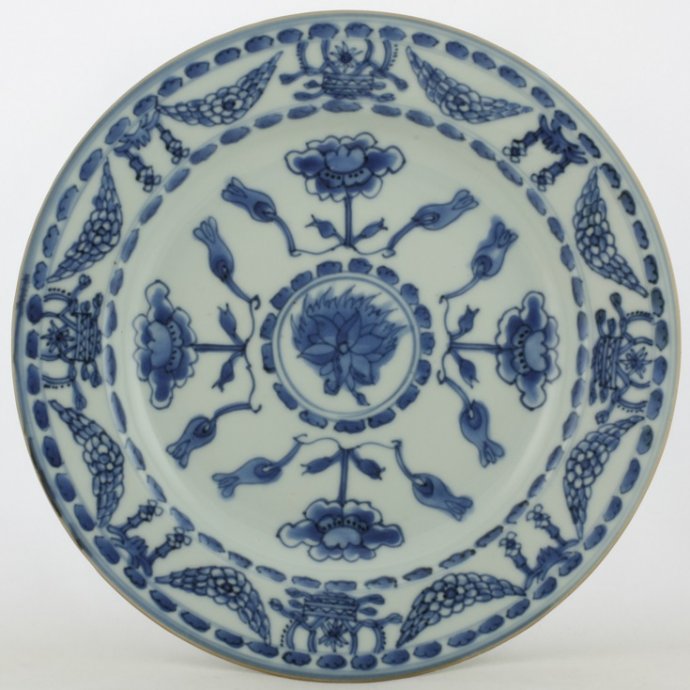 Dish on footring, flat underglaze brown-edged rim (jia mangkou). Decorated in underglaze blue with a central flowerhead in a circular roundel surrounded by four groups of flowers. On the rim a border of swags and crowns. On the reverse three flower sprays.

The border with swags and what appear to be crowns suggest an European design as source of inspiration for the decoration on this dish.

Condition: A fleabite to the footring and some very tiny fleabites to the reverse rim. 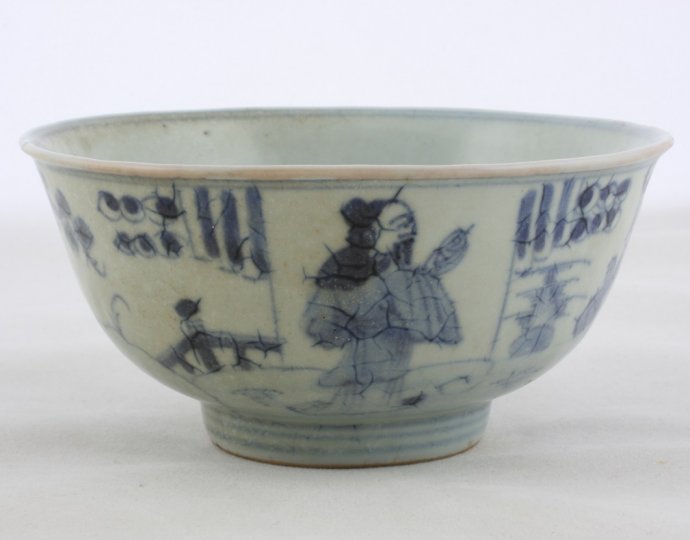 Bowl on footring, slightly flaring rim. Decorated in underglaze blue with the Taoist Triad, three figures representing Tu (happiness), Lu (Official Advancement) and Shou (Longevity) in a fenced garden landscape. The interior with a stylised pine tree, a deer and lingzhi in a double cirle. Marked on the base with the highly stylised four character mark Hung-hsi, nien chieh. On the interior wall an old oval paper collectors label from George Eumorfopoulos with the handwritten collectors number C.159, in black ink.

The design on this bowl is unusual and the stylised mark can be considered extremely rare. The bowl is apparently over fired creating the cracked ice motif of the glaze. 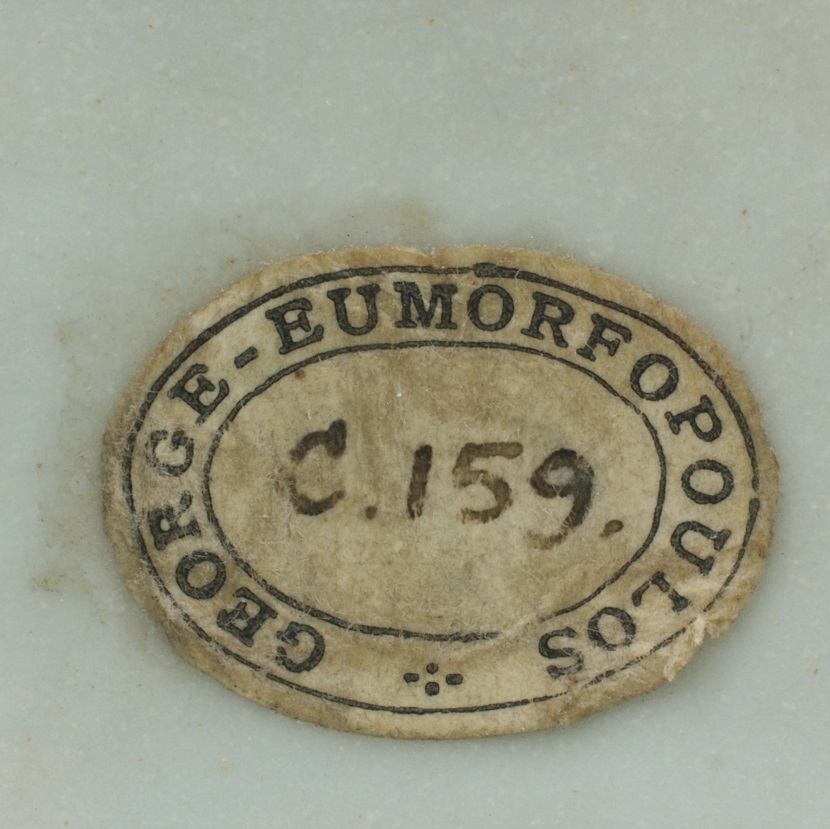 George Eumorfopoulos was a distinguished collector of European and Oriental porcelain. He was born in Mount Pleasant, Liverpool, on 18 April 1863, the son of Aristides George Eumorfopoulos and Mariora Scaramanga. He worked for the merchant firm of Ralli Brothers, where he rose to the position of Vice-President before retiring in 1934. He initially collected European porcelain before moving on to create a renowned collection of early Chinese art, encompassing porcelain, archaic bronzes and jades, and sculpture and paintings. Eumorfopoulos turned a part of his house on Chelsea Embankment into a private museum to display these works of art, which attracted many visitors. Eumorfopoulos was a member of the Victoria & Albert’s Advisory Council from 1925 to 1935, and was a founder of the Oriental Ceramic Society and its first president from 1921 until his death in 1939. In 1934 he sold his collection at below market value to the British Museum and the Victoria and Albert Museum. (source: www.vam.ac.uk)

It is now recognised as an academically interesting piece of provincial Chinese blue-and-white made for the domestic market in Fujian Province (i.e. not in Jingdezhen) a lesser known manufacturing centre. It can be dated mid or second half 19th Century.