In this period the Chinese Imperial court reduced its orders for porcelain and the factories had to find new clients. The Dutch East India Company, (Vereenigde Oost-Indische Compagnie, VOC), was an important customer for export wares. The Company now had a trading settlement on Formosa (Taiwan) from where porcelain had been ordered in China from 1634. Besides dishes and plates made in traditional Kraak styles, pieces that were made after European models, such as candlesticks, salts or beer mugs were also delivered. Chinese shapes were very diverse, too, and included bowls, covered jars, bottles, teapots or wine ewers. A new shape was the ‘rolwagen’, a tall, slender cylindrical vase. Transitional porcelain is relatively thick, well potted, and beautifully finished with a smooth, clear glaze. The decorations in underglaze cobalt blue frequently show a continuous figurative scene in a landscape. Porcelain painters often used woodcut illustrations from Chinese books as sources for their decorations. A special feature on export wares for the VOC is the ‘tulip’ motif, probably derived from Dutch tiles. As with Kraak porcelain, the shapes and decorations of Transitional porcelain were frequently copied by Delft potters. 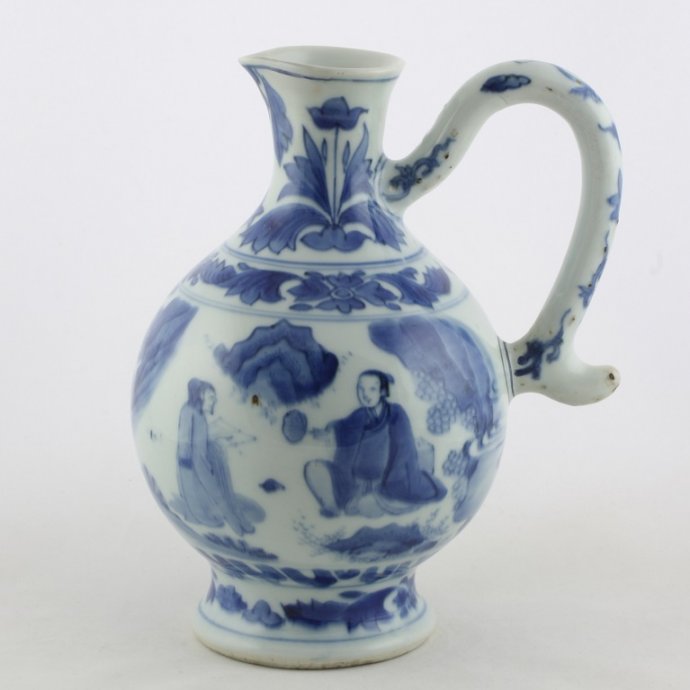 Ewer on footring, the neck ending in a short triangular spout. Curved C-shaped handle pierced at the top for a mount. The shallow conical base is glazed. Decorated in underglaze blue with a fenced garden with maple trees, precipitous rocks enveloped by billowing clouds and a resting scholar holding a fan in his right hand. To his left two servants, one holding books, the other a covered dish (?). Round the shoulder a flower scroll border and on the neck two vertical Dutch tulips with symmetrically placed leaves. Round the bottom of the body a stylised lotus-petals border and round the foot a flower scroll border. On the handle a flower spray with cloud motifs.

In the period (1630-1645) the VOC (Dutch East India Company, 1602–1799) ordered Chinese porcelain through the Company's factory on Formosa (Taiwan). Besides bowls and dishes made in traditional kraak style, new shapes (like this ewer made after European models), decorations and combinations of traditional motifs emerged and the wares made in this period are quite extraordinary in their creativeness, freedom and variety. (Jörg 1984, p.14), (Jörg 2011/1, p.123)

Such ewers after a European (German stoneware) model were made especially for the VOC (Dutch East India Company, 1602–1799) as well as for the Dutch private traders. As they were supplied without lids, a mount could be attached in the Netherlands, Characteristic of this export Transitional porcelain is the heavy potted body, the smooth glaze, the all-over figural decoration, and the 'tulip' motif on the neck. The motif of a scholar who has retreated into nature for a picnic, to study scrolls, or for a spell of contemplation with his servants and or colleagues is common for this period. (Jörg 2002/2, p.66)

Condition: A firing flaw to the footring and two old restorations to the rim and the underside of the attachment of the handle with some scratches to the glaze. 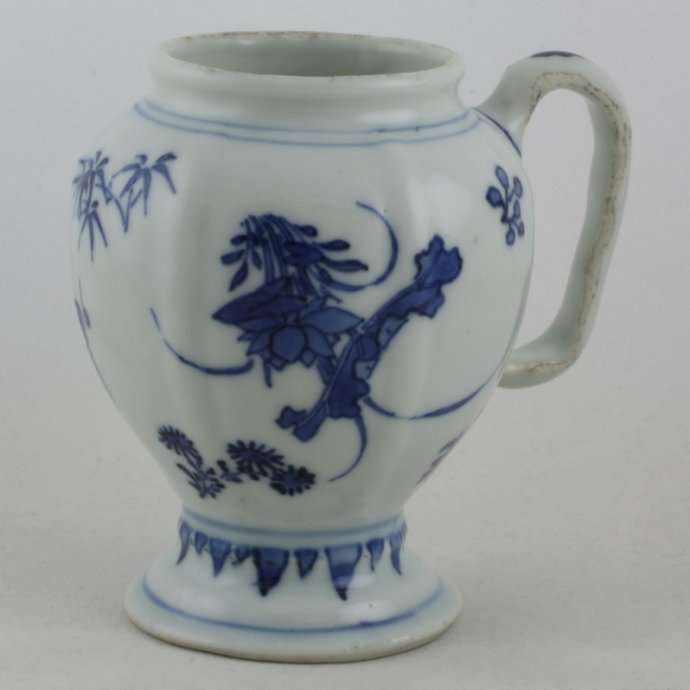 Mustard pot of hexagonal ribbed and ovoid form with a pedestal foot and a sunked in base. Curved C-shaped handle. Wide mouth with glazed rim for cover, now missing. Decorated in underglaze blue with single flower sprays, bamboo and flowering, prunus, irises, lotus and aster plants. Around the foot a descending lotus leaves pattern border, on the handle cloud motifs.

Mustard pots were ordered by the Dutch East India Company, (Vereenigde Oost-Indische Compagnie, VOC), as early as 1608. From 1625 onward, the VOC had a trading post on Formosa (present-day Taiwan). Chinese junk seafarers soon made regular trips to Formosa with a large assortment of Chinese goods. The VOC could now order products that were in demand in the Netherlands, such as salts, jugs with spouts, terrines and suchlike, with a Dutch form. This mustard pot was also part of this product line. Volker reports that in 1639 the VOC ordered 200 mustard pots of which half are to be 'ribbed as sample' and illustrates one of this form. A number of such mustard pots of exactly this design were in the cargo of a Chinese junk salvaged in 1983 by Captain Michael Hatcher and sold in Amsterdam in 1984, which also contained (unrelated) pieces with the cyclical date for 1643. Throughout the 17th century the VOC continued to order mustard pots in large quantities of up to a thousand at a time. (Howard 1994, p.129)

Just like salt, mustard was once an important taste-inducing additive on the dinner table, though it had less status because it was locally made. Still the luxurious mustard pots made of Chinese or Japanese 17th century porcelain were quite large. Mustard used to have to be stirred before use, which is why mustard pots often had a little opening in their lids for a small stirring stick. Sometimes such a pot was fitted with a new nice silver lid, which lacked an opening. A tiny piece of pottery was then broken out of the rim, in order to allow the stirring stick or spoon to fit in.

Condition: A firing flaw to the inner footring, some chipped of glaze flakes to the handle and some glaze rough spots to the mouthrim caused by the cover, now missing. 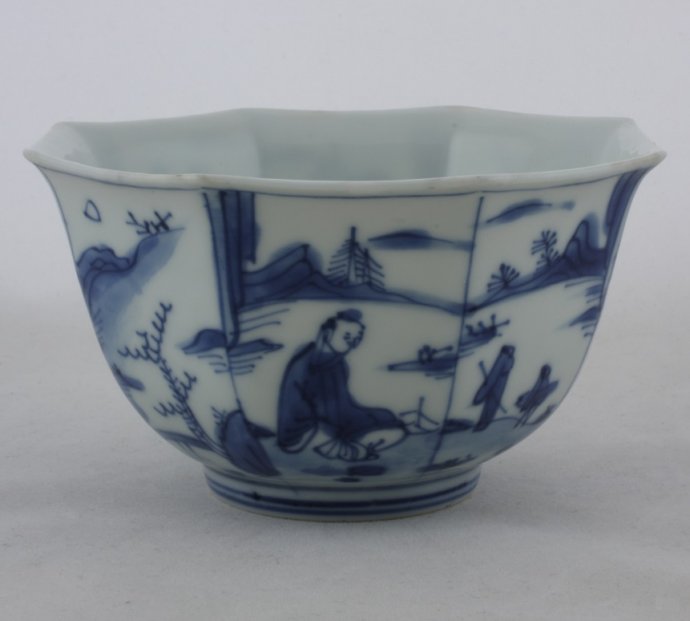 Octagonal bowl on footring, spreading rim. Decorated in underglaze blue with river scenes alternating with a figure in a landscape.

Octagonal bowls of this type are common in Dutch collections. An identical bowl fitted with two handles is in the collection of the Rijksmuseum Amsterdam and in the 1668 inventory of Amalia van Solms the widow of Stadholder Frederick Henry there is mention of Twee achtcantige kopkens met oirkens, 'two octagonal bowls with handles'. which may refer to this type (Jörg & Van Campen 1997, p.83), for this bowl please see:

Similarly shaped, sized and decorated octagonal bowls were salvaged from the wreck of the Hatcher junk which sank c.1643, please see:

Condition: A star-shaped hairline to the wall. 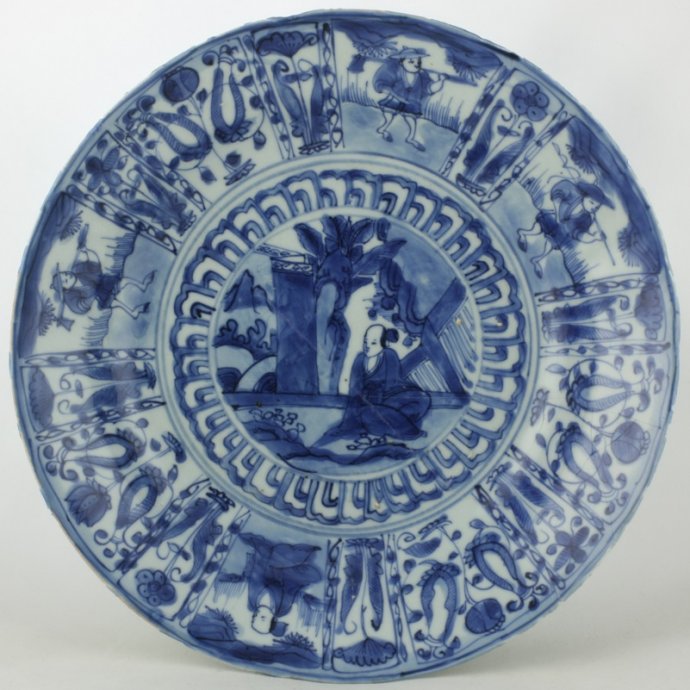 Dish on footring with a flat rim. Kiln sand adhering to the base. Decorated in underglaze blue with a figure seated in a garden landscape surrounded by overlapping petals. On the sides and rim eight large and eight narrow panels. The narrow panels are decorated with Dutch flowers, most likely tulips, four large panels are filled with a figure in a landscape, the other four large panels are filled with Dutch flowers. The reverse has four cartouches with flower sprays and four small panels filled with bamboo.

This dish can be classified as a border IX dish. This border is divided by straight lines which form sections varying in number and size. there can be as many as eight large panels divided by eight narrow ones. The peculiarity of this border is that it blends typical Chinese kraak panelled borders with Transitional style motifs, such as descriptive scenes with people in a landscape and a number of flowers peculiar to these wares. These are usually refferred to as tulips, yet many varieties of flowers are depicted: carnations, a small double-petalled round flower and broad, very stylized flowers with stiff leaves in pairs, almost an armorial flower, which does not reprersent a tulip at all. Jörg suggest that perhaps these are 'Dutch flowers' a description of which he found on a VOC document dated 1639 sent from Batavia to Fort Zeeland in Formosa requesting the Dutch merchants there to buy wares painted with 'Dutch flowers'. While the so-called 'Dutch-flowers' are difficult to trace, the tulip, carnation and small round-pettaled flowers are all typical of Iznik wares on which they were painted from the middle of the sixteenth century. Records of the VOC show that the Dutch were primarily interested in obtaining good quality porcelain. They never interfered in the choice of decoration until 1635, when they gave the Chinese dealers a design to be copied. Volker thinks 'that it is as good as certain that the first transitional ware was made after those models in 1635, and that it was exported for the first time in 1636' (Volker 1971, p.60). Figures-in-a-landscape is the principal motif which appears in the centre medaillion. Contrary to earlier depictions of human figures which often represent mythological or historical characters in passive attitudes or scholars in contemplative postures, here the figures offer a very strong narrative element, being represented while talking, walking or working, always doing something. (Rinaldi 1989, pp.113-115)

In order to make the traditional kraak ware more attractive and competitive, the tulip and narrative scenes with figures of Transitional porcelain were also painted on bowls and dishes which otherwise have the typical kraak body and style of painting. (Jörg & Van Campen 1997, p.60, cat. 41) 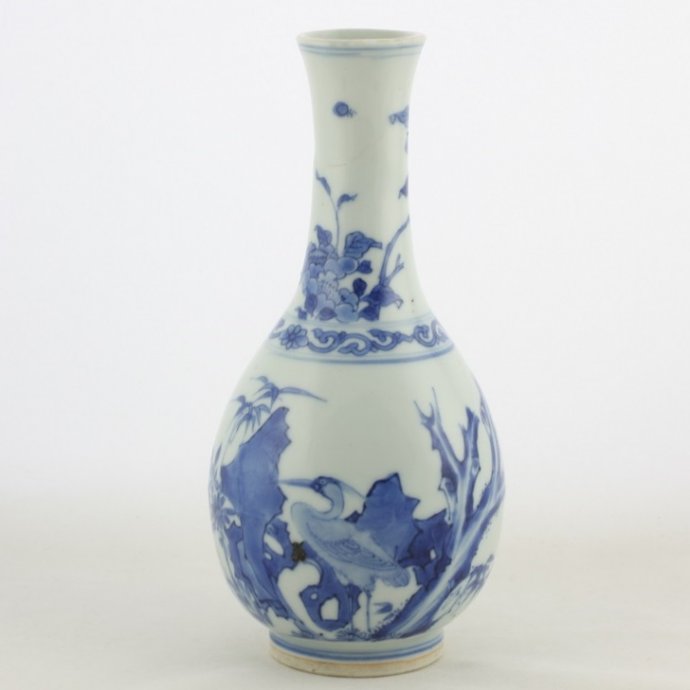 Vase on a high footring, pear-shaped body cylindrical neck with slightly everted rim. Decorated in underglaze blue with two cranes, One is in flight and the other crane is standing beside pierced rockwork with flowering aster and bamboo plants. On the shoulder a band with flower scrolls, on the neck a large flower spray. To the base an old square paper collectors label with the text ´N56´ and ´a´. The addition of the ´a´ most likely points out that this vase was once part of a set.

Transitional ware was named after the changes that took place in the political sphere in China after the death of the Emperor Wanli (1619), which ultimately led to the fall of the Ming and the establishment of the Qing Dynasty (1644). With the introduction of new forms new types of decoration came in as well. On tall pieces like bottles and vases in particular the main part of the body is no longer divided into panels, but the entire areas is used for a continuous scene. The scenes are often framed above and below by a decorative band of floral scrolls. Technically too, this porcelain is obviously different from Kraakporselein. It is thicker, carefully made and seldom or never distorted in firing. The glaze is particularly fine, smooth, hard and devoid of unevenness of blemishes. (Jörg 1984, p.14)

The crane is an auspicious symbol of longevity and a blessed life, a pair of cranes of a long and happy marriage. (Jörg 2003/1, p.185) The thick body, the shape, the free and finely painted design and the clear glaze make this vase a fine example Transitional ware dating from the 2nd quarter of the 17th century.

Condition: A restored neck and a hairline to the body. 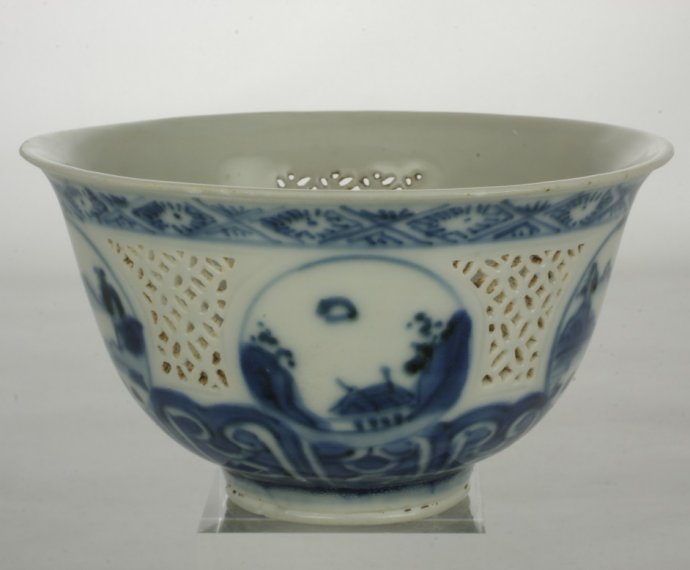 Small bowl on a footring with an everted rim with an unglazed base. Decorated in underglaze blue. The sides open-worked in a cash (coin) pattern with five reserved roundels decorated with landscapes and flowers. Around the rim a small trellis pattern border, on the foot a petal-panel border.

Bowls of this type, with sides partly or completely pierced, are mentioned in the Dutch East India Company, (Vereenigde Oost-Indische Compagnie, VOC) records of 1643-1646 as 'half doorluchtige or doorluchtige', 'semi translucent' or 'translucent' bowls, but were also made before that time and first appeared during the Wanli period (1573-1619). Apart from bowls and tazzas, the technique rarely occurs on other export forms in the 17th century. The Chinese call it linglong, "delicate openwork", while it is also known as 'plique-à-jour' or 'devil's work' because of the great skill and patience the work demanded. (Jörg & Van Campen 1997, nr. 71)

Bowls with this particular form, size and decoration were also found in the Hatcher Junk, c.1643. The wreck of a Chinese junk discovered by Captain Michael Hatcher in the South China Sea in the early 1980's. It has been proved that practically the whole cargo, consisting mostly of blue and white, was made around 1643, as proven by several pieces dated 1643.

For an identically shaped and decorated bowls, please see:

Condition: Five minuscule fleabites to the underside of the rim.