The decoration on the vases in this category show one of the most popular motifs used for decoration on export porcelain during the Kangxi period. Slender Chinese women in a garden may reflect a literary source, or may merely be depictions of beautiful ladies, but in combination with a dancing boy, his arm in the long sleeves of his garment, this motif probably comes from a deeper, older cultural layer. As recent research has shown, the dancing boy is connected to New Year's festivities and exorcism practises. In this context, the woman may be a personification of Xiwangmu, The Queen Mother of the West and a symbol of immortality. In the Netherlands, the lady and the boy were known by their Dutch names 'Lange Lijs' and 'Zotje', names that were taken over in English as 'Long Eliza' and 'the Fool'. They were the epitome of Chinese exoticism for the Western beholder and served as a model for numerous imitations in chinoiserie settings. (Jörg 2011/2, p. 37)

Vase on footring. Dutch silver mount. Decorated in underglaze blue, the high knopped foot with three flower sprays, on the ovoid sides moulded panels filled with a standing 'Long Eliza' figure alternating with moulded panels filled with flowering peony plants growing from a basket. On the shoulder three flower sprays and around the neck a waves pattern border. The Dutch silver neck has the 925 (purity) mark as the standard mark on articles too small for the full hallmarking 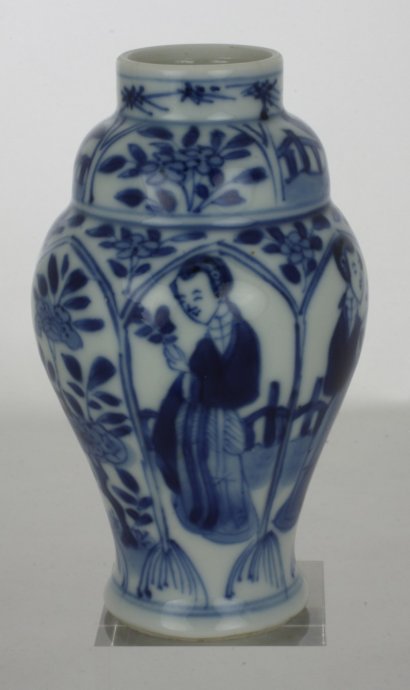 Baluster vase on footring. The rim unglazed inside for cover, now missing. Decorated in underglaze blue with a lotus leaves pattern border around the foot. On the waist panels showing a flowering peony plant alternating with two panels filled with a 'Long Eliza' figure standing in a fenced garden holding a flowering stem. On the shoulder panels showing flowering branches alternating with little dancing boys, around the neck scrolls of flowering branches. Marked on the base with the single character mark: Yu, (Jade (Yuan to Qing)), underglaze blue.

Condition: A "J" and Y"-shaped hairline to the rim. 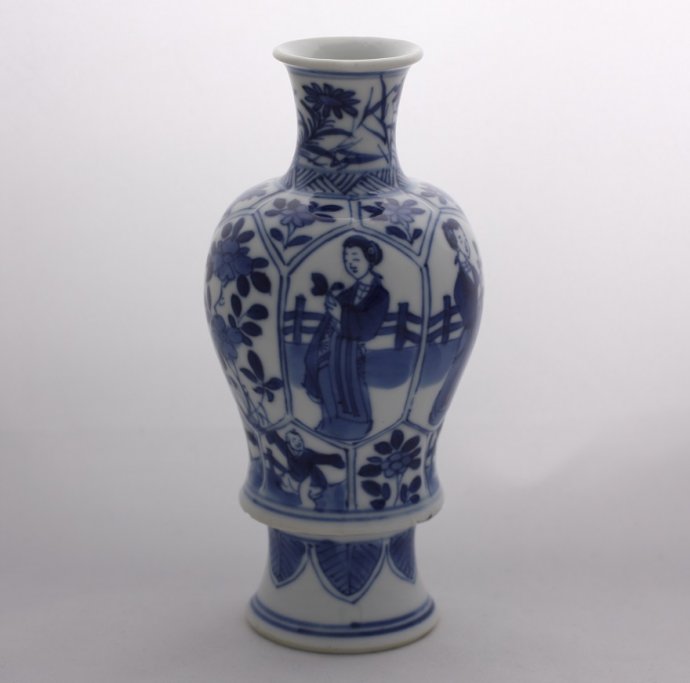 Condition: A tiny J- and Y-shaped hairline both to the rim and some glaze rough spots. 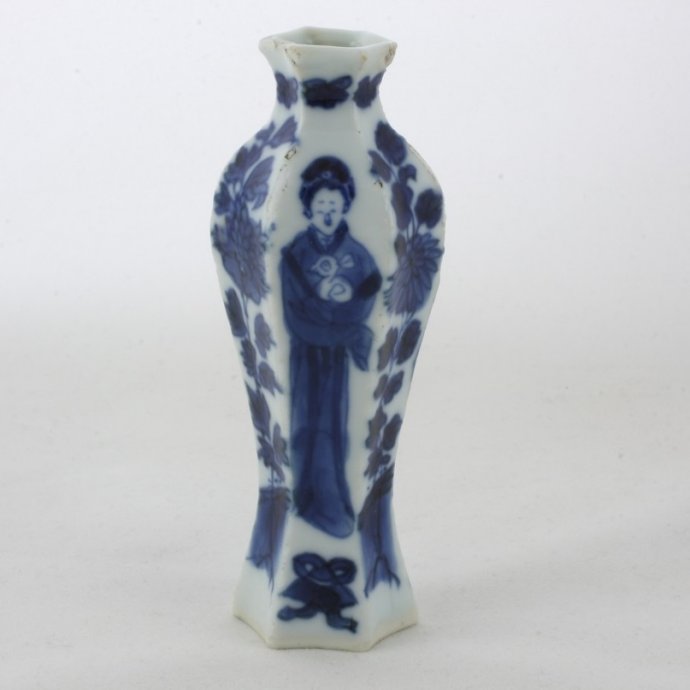 Small hexagonal baluster shaped vase on hexagonal foot. Decorated in underglaze blue with three facets filled with a ´Long Eliza´ figure alternating with flowering peony and chrysanthemum plants. Round the mouthrim a single flower head pattern border. The three "Long Eliza" figures stand above one of the ´Eight Buddhist Emblems´ namely: Shell (luo), emblem of good omen, symbol of luck. and two of the ´Eight Precious Objects´ namely; Picture (jing), which is considered to be a bronze mirror from ancient times and Pearl (zhu), emblem of the omen of happiness, often pursued by dragons. On the base the Chinese character '怡', (meaning, harmony, pleasure, joy or be glad), most likely indicating the name of the shop making the object. (Pinto de Matos 1996, pp.273-280)

This decoration shows one of the most popular motifs of that time, the slender Chinese woman, holding a flower. In Dutch she was called a Lange Lijs, which became ´Long Eliza´ in English. (Jörg & Van Campen 1997, p.101)