Dutch merchants arrived in Asia towards the end of the 16th century. The The Dutch East India Company, (Vereenigde Oost-Indische Compagnie, VOC), was founded in 1602, competed fiercely with the Portuguese as traders. Porcelain from captured Portuguese vessels (caraccas) was called kraak porcelain, a Dutch corruption of the Portuguese word. It was made especially for export in Jingdezhen, the porcelain centre in Jiangxi Province. The VOC shipped it in huge quantities and soon it was a commonplace item in Dutch interiors.

Kraak porcelain was primarily bought for practical use but pieces also had decorative functions. The paintings, done in underglaze blue only, show landscapes and animals, rarely human figures, making this porcelain suitable for Islamic markets, too. Buddhist and Daoist good luck symbols make up the panelled border decorations. Plates and dishes were moulded. They are thin, usually rather quickly finished and often have kiln grit adhering to the underside. The glaze on the edge is often retracted. Apart from large dishes, the bases of other objects are glazed, and the V-shaped footring is slightly undercut. Initially, the panels on kraak porcelain were raised, but this feature disappeared at the end of this period.

Many of the closed forms, perhaps even the majority, lack one of the principal Kraak characteristics: thinness. Consequently most of these pieces are much heavier than their open counterparts. Yet it has become customary to include these forms among Kraak wares, although strictly speaking it would be more correct to refer to them as porcelain decorated in Kraak style. (Rinaldi 1989, p.166)

Closed Forms are classified by their shapes. These are divided into two major groups pouring vesses and boxes. 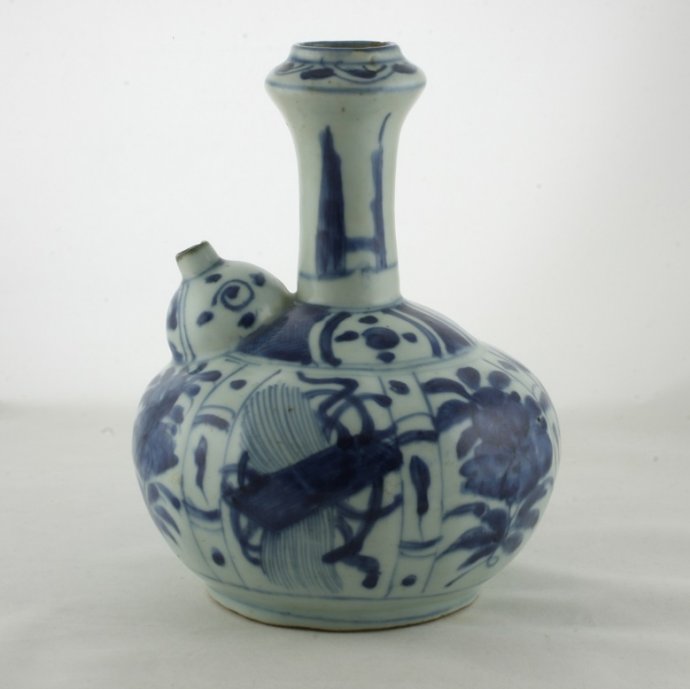 Kendi on footring with a slight melon shaped body, a bulbous spout, and raised shoulder. Decorated in underglaze blue with wide moulded panels filled with naturalistic and auspicious motifs alternating with narrow moulded panels with beaded pendants and lingzhi. On the shoulder two medallions filled with flaming pearls separated by a diaper pattern. On the spout a solid lozenge with tassels and groups of dots, around the neck plantain leaves. On the base an rectangular paper collectors label that reads: '78' and the remains of another paper label.

According to Rinaldi this Kendi can be classified as a Shape I.3a. Kendis with bulbous or flanged spouts (c.1590-1645). This is the most common of Kraak kendi shapes. The body is rounded and slightly depressed.The neck is long and may end with a flaring mouthrim, a dome-like shape or a flange. The spout may be bulbous or flanged. Bases are slightly convex and glazed.There are no known Kraak kendis with reign of shop marks.These kendis are heavily build in moulded sections luted together. Th decoration is in the classical Kraak sttyle. They com in several sizes from miniatures which measure about 130 mm (5.12 inch) in height to the normal size which may reach up to 250 mm (9.84 inch). (Rinaldi 1989, p.174)

The gorgelet or kendi is a pouring vessel with rounded sides, a bulbous spout and tall neck. The kendi was originally used in Asia for pouring wine or water. When the habit of smoking was introduced in Mohammedan countries, the kendi was also used as part of the Turkish water pipe set. (Pijl-Ketel 1982, pp.130-133)

The kendi is a drinking and pouring vessel widely used in Asia. Its basic shape is a bulbous body, a long neck and a tubular or breast-shaped (mammiform) spout on the shoulder. The kendi has no handle and one holds it by the neck and drinks from the spout. The kendi seems to have evolved from the Indian "kundika" and spread throughout Asia, changing shape and adapting to existing local vessels for similar use. Kendis of Chinese kraak porcelain of the first half of the 17th century and Japanese kendis of the second half were part of the Dutch East India Company's (VOC) porcelain assortment for the inter-Asian trade. Apparently, they also reached The Netherlands in small quantities, probably as part of the belongings of retiring VOC employees. They were not used according to their traditional function in The Netherlands, and must only have been decorative items or were filled with flowers as shown on paintings. (Jörg 2003/1, pp.63-66)

The word kendi is derived from the Sanskrit Kundika, the name given to an Indian ritual bottle, examples of which date from the third century BCE. The kundika evolved into the kendi (junchi in Chinese). Although kendis were made in China throughout the Yuan and Ming dynasties, most of them were exported to Southeast Asia, where they were used primarily for drinking water. During the seventeenth century the standard kendi was mammiform. Even when this form was made in the most basic, traditional shape, its decoration was Chinese in nature. Zoomorphic forms, which first appeared in the sixteenth century, also followed Chinese artistic conceits and occasionally added complex meanings that would have been unintelligible to most people in the intended Southeast Asian market, let alone to Europeans. Kendis were made in Jingdezhen almost exclusively, although some were also made in Yixing. While initially made for export to Southeast Asia, their exoticism-especially of the zoomorphic examples-earned kendis a ready market in Europe during the late sixteenth and early seventeenth centuries, and it was the Asian prototype that European and Japanese potters copied. The Dutch obviously collected kendis as curiosities, but since they had no discernible function occasionally they were transformed into ewers by being mounted in silver. Kendis are continued to be made in Southeast Asia, where they are still used in religious and civil ceremonies and daily life. (Sargent 2012, pp.86-95)

Condition: A firing flaw to the footring and a chip to the rim. 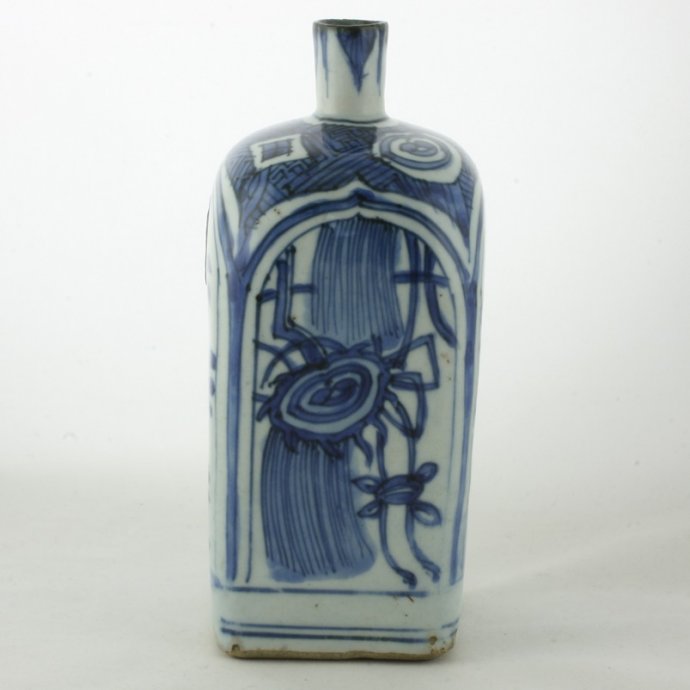 Square bottle on a flat unglazed base, the straight sides widening towards the rounded shoulder, a small cylindrical neck. Decorated in underglaze blue on each side with a large vertical panel successively filled with

a ruyi head on top of a flywhisk and ribbons, a flowering plant, a lantern on top of a tassel and ribbon and a flowering plant. On the shoulder four panels, reserved on a swastika pattern ground in underglaze blue, two filled with a ruyi the other two with a single lozenge. Round the mouthrim a descending pointed leaves-pattern border.

The rui or ruyi, which means ´may your wish be granted´, arrived as an individual motif from the head of the ´jo-i´ sword which is derived from the fungus plant and is therefore also the symbol for longevity. Hence it is also the symbol of Buddhism and often presented as a gift for good wishes. The flywhisk is seen in the hand of Lu Dongbin (Lu Tung-pin), one of the Daoist Eight Immortals. Attribute of both Buddhist and Daoist sages. The lantern is a auspicious gift at weddings. Yang quality as principle of light. Symbol of joy and festivities. The lozenge is one of the Eight Precious Symbols and symbol of victory and success, A swastika is a Buddhist symbol of the heart of Buddha. Sanskrit for ´so be it´. In Chinese: ´wan´ meaning ten thousand. This is regarded as ´wan shou´: a symbol of endless longevity. (Pijl-Ketel 1982 & Sjostrand & Lok Lok 2007)

Unlike dishes, saucers and bowls of kraak porcelain, hollow forms such as bottles, ewers and jars do not have the characteristic thin body of Kraak porcelain and are more heavily potted. Nevertheless, all authors accept them as kraak ware because of their decoration in - usually moulded - panels. (Jörg & Van Campen 1997, p.65)

Although Rinaldi does not include this specific shape among her kraak porcelain categories, there are reasons for doing so if they exhibit proper kraak characteristics as is the case here. The bottle has a body similar to that of kraak bottles, the decoration is confined in straight panels, the motifs are the same as those on ordinary kraak pieces and the way they are painted is also very similar, the shape on the other hand is rare.

The shape of this bottle was the forerunner of the more rounded 'square' Chinese flask of the 1630 which itself was the forerunner of the square Japanese flask which was available from the 1660s until the early 18th century. Unlike earthenware, Chinese porcelain was not porous, and such bottles had a number of uses in Europe such as for spirits and oils. (Howard 1994, p.204)

A similar shaped bottle was found in 'The Wanli Shipwreck', this bottle is decorated with the coat of arms of 'Alvaro Vilas Boas', a gentleman of the Casa Real and a commander of the Order of Saint James of the Sword. Mr. Boas is thought to have been the commander of the Portuguese India fleet where he went on 18 different occasions.  (Sjostrand & Lok Lok 2007, pp.98-99)

Condition: A large glaze firing flaw to one of the sides, some loss of glaze to the edges of the base and a frit to the rim.