Wheel engraving cuts through the glaze, using copper wheels of varying sizes and abrasives, and reveals the porcelain´s white body. This European technique was first developed for glass around 1590 to 1605, and then applied to ceramics. Commentators have speculated that this demonstrably European carved decoration may have been performed by either Bohemian, Saxon or Silesian craftsmen. The former collection of King Augustus the Strong in Dresden contains several wheel engraved sets. An inventory drawn up in the period 1721-1727 notes that the Saxon Minister Count Vitzthum had several items brought from Holland in December 1723 at the King's command, suggesting that the engraving was carried out there. Given the predominance of Bohemian glass traders and artist in Amsterdam and many other European cities at the time, this was probably their work. (Sargent 2012, p.504), (Emden 2015/1, p.124) 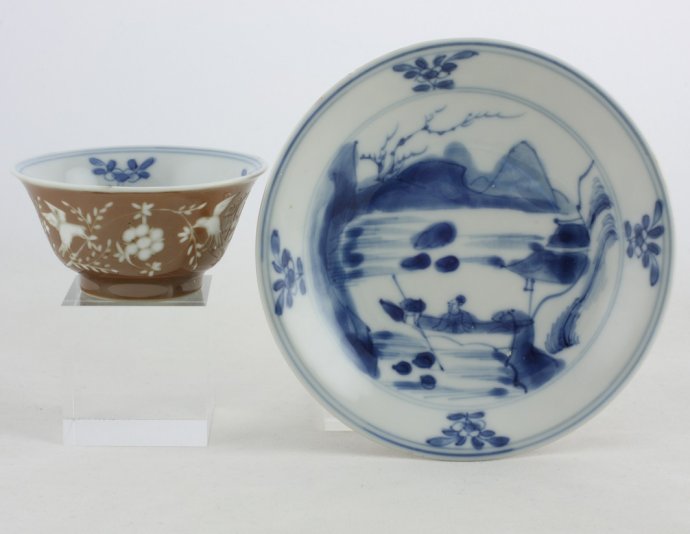 Teacup and saucer on footrings, slightly everted rims. Batavia Brown covered with underglaze dark brown and underglaze-blue with a riverscape  in a double circle, on the sides and rim four flowering stems. On the reverse a continuous, wheel engraved, decoration of birds and flowering scrolls. Marked on the base with a square shop mark in a double circle, underglaze blue. The teacup is decorated en suite.

Teacup: Three popped bubbles of glaze to the rim, caused by the firing process..

Saucer: A popped bubble of glaze to the rim caused by the firing process and some fleabites to the footring. 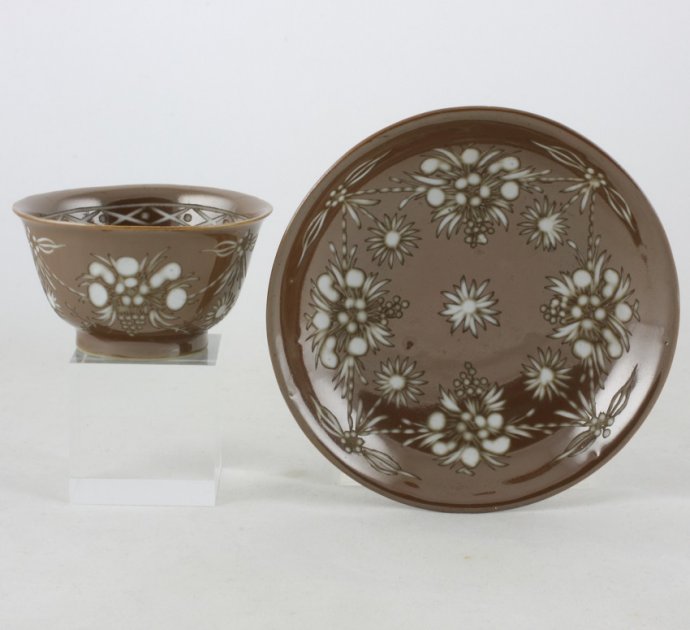 Teacup: A firing flaw to the inner footring and a fleabite and frit to the rim.

Saucer: Some firing flaws to the base.