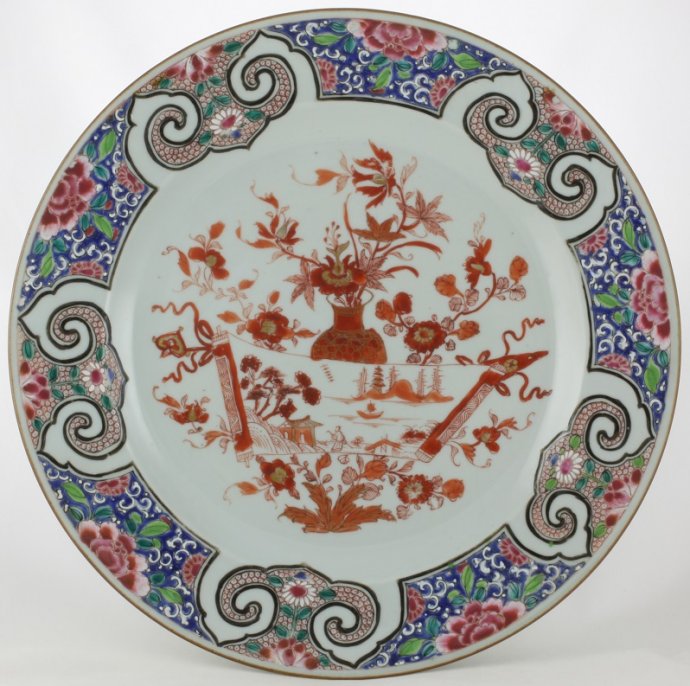 Dish on footring, wide flat, underglaze brown-edged, rim (jia mangkou). Decorated in 'Red & Gold' / 'Rouge-de-fer' with iron-red and gold combined with various famille rose overglaze enamels. The centre with a reserved medallion formed by linked ruyi, painted in black enamel with flowering peony and chrysanthemum plants, a vase filled with flowering hibiscus branches and a riverscape within an unfurled scroll with ribbons. On the rim half flowerheads with a leafy flowering stem reserved on a cell-pattern ground alternating with half flowerheads with leafy scrolls. The reverse is undecorated.

This combined decoration of late 'Red & Gold' / 'Rouge-de-fer' with polychrome enamels is uncommon and rare, especially on dishes of this size.

Condition: Some loss of enamel and some slight wear to the iron-red decoration. A star-shaped hairline to the base. 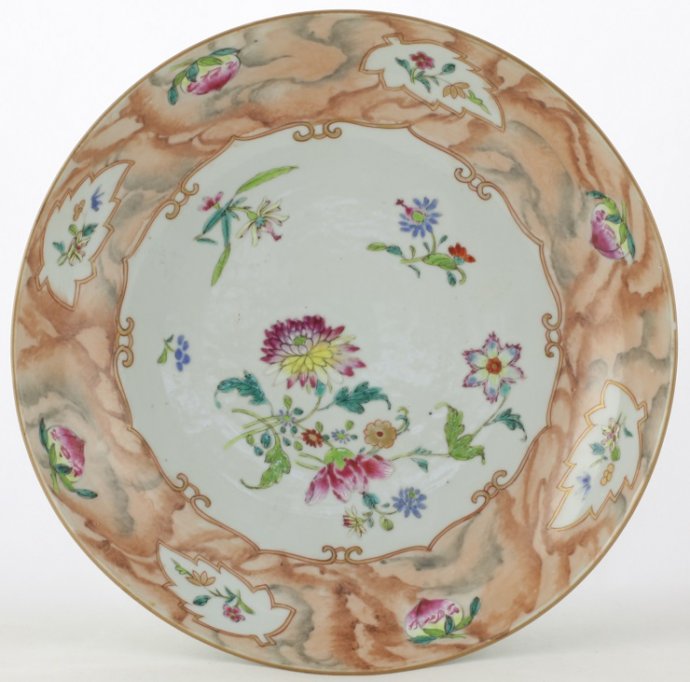 Dish on footring, straight rim. Decorated in various famille rose enamels with a scalloped medallion with chrysanthemums and various other, scattered, single flower sprays. The sides with four peaches and four leaf-shaped panels filled with a flower spray on a light brown ground with grey marbling. The reverse is undecorated.

According to Jörg Chinese porcelain for the domestic market often has a decoration or ground imitating other materials, for example, woodgrain, lacquerwork, jade, bamboo or bronze. This occurs less on export porcelain. This dish has been painted to imitate marble or soapstone. The Van Diepen Collection  has a fish dish with strainer and a teacup and saucer, all four decorated in this way and possibly all parts of the same service for the objects please see:

Condition: A frit and a hairline to the rim. 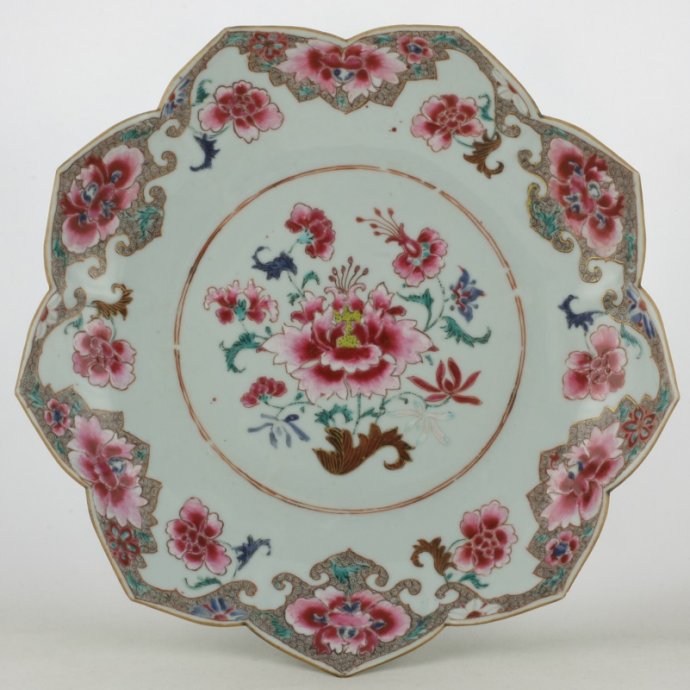 Dish on footring with an underglaze brown-edged open lotus-shaped rim (jia mangkou). Decorated in various famille rose enamels and gold. In the centre a flowering peony, Chinese carnation and a lily (auspicious symbols of longevity and eternal youth). On the sides and rim peonies, chrysanthemums and narcissi with leaves, on a spiral diaper ground. On the reverse nine stylized lingzhi fungi of immortality.

The dish is modelled as an open lotus flower and is characteristic of the more de luxe kind of famille rose that was made for the Western market. It fully corresponds to Jingdezhen production of the late Yongzheng and early Qianlong eras, when decoration often appears on dishes and bowls consisting of single floral sprays without rocks, bordered on the edge with floral ornamentation composed into lobed bands on a spiral pattern ground. We can find in worldwide collections a whole range of identical or more-or-less similar patterns, often differing only in minor details. Similar pattern are recorded in Europe from as early as the 1730s. (Suchomel 2015, p.404)

Condition: Some shallow frits to the footring, two hairlines and a shallow glaze chip to the rim. 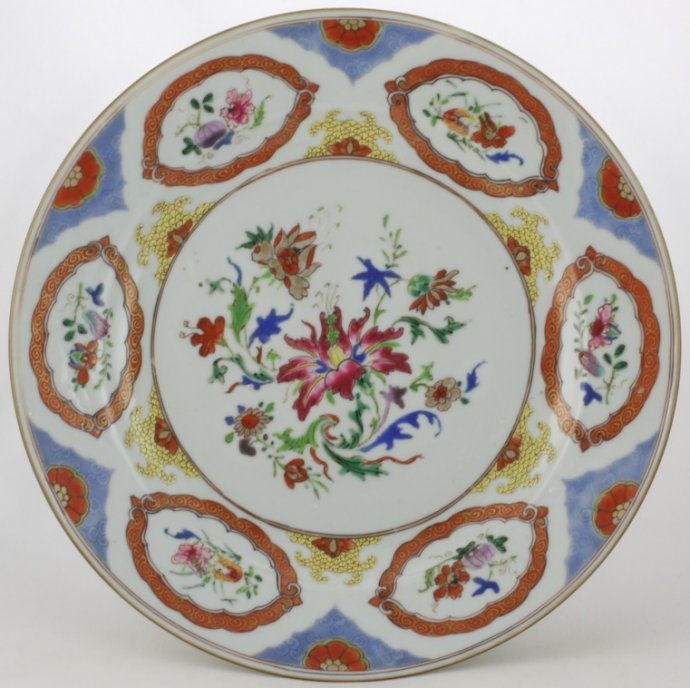 Dish on footring, flat underglaze brown-edged rim (jia mangkou). Decorated in various famille rose enamels with gold and other overglaze enamels, with various flower sprays on the sides and rim six oval shaped cartouches filled with flower sprays and fruiting branches separated by wedges with half flowerheads. On the reverse four flower sprays.

Howard states that this apparently Chinese design clearly derives from the second design of Cornelis Pronk, 'The Four Doctors' which has a very similar border formation but with more elaborate details. It is probable that the interest caused in Canton by the Pronk border designs prompted a Chinese workshop to produce a similar effect at much lower cost, using patterns with which it was more familiar, for Dutch supercargoes or private traders of other countries. (Howard 1994, pp.80-81, cat. 64) 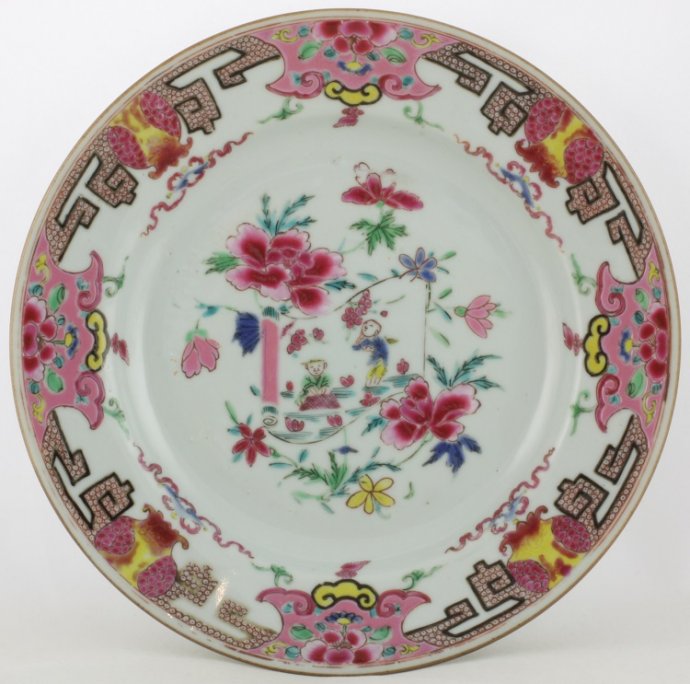 Dish on footring, flat, underglaze brown-edged, rim (jia mangkou). Decorated in various famille rose enamels including pink, some black, overglaze blue, green, yellow and coral red with two figures in a partial opened roll surrounded by various flower sprays. On the rim and sides ruyi heads tied with swirling ribbons to large pomegranates in between geometrical patterns on a frogspawn ground alternating with panels filled with flowerheads on a pink ground and a yellow ruyi heads with a tassel. The reverse is undecorated. On the base a rectangular paper collectors label with the number '179' and a rectangular paper label that reads: 'Epoque Kien-Long. Oojrofe, Paris 3.500 frs Décor au rouleau'..

Condition: Some shallow wear to the enamel. 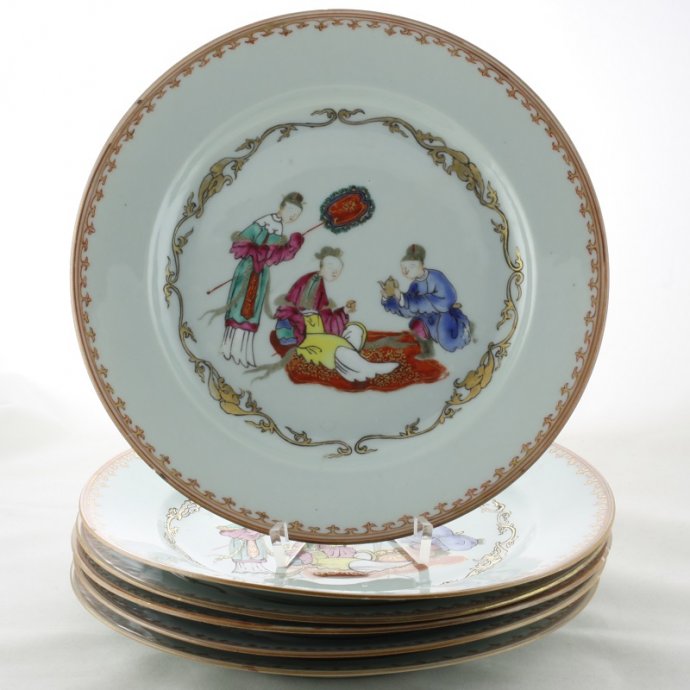 Six dishes on footrings, flat underglaze brown-edged rims (jia mangkou). Decorated in various famille rose enamels, iron-red, black, gold and other overglaze enamels with a seated lady and two servants. One servant is holding a fan behind the seated lady while the other is pouring a cup of tea. The central decoration is surrounded by a floral scroll in rococo-style. On the rim a spearhead pattern border (the shape resembling a spearhead while in fact they are stylised ruyi motifs). The reverses are undecorated.

The design on these dishes derived from an old Chinese novel named 'The drunken Concubine',  one of the masterpieces by Mei Lan-Fang (a famous opera actor and legend, famous for performing a female role on stage). The story happened in Tang Dynasty around 745-755 AD. It is almost a one-person show. The story is quite simple. Mei had made this play famous by his vivid performance reflecting the concubine's disappointment, her drunken charming, and her intentional show-off of her beauty. There are many movements difficult to perform, including drinking a cup with the performer's teeth only and placing the cup on the tray by bending over backwards.

YANG Yu-Huan was Emperor Ming-Huang's favourite concubine. One evening the two had arranged to meet in a pavilion in the imperial gardens after the Emperor was off his duty. So YANG prepared a banquet and was sitting there waiting for him. But the Emperor failed to his promise and went to see one of his other beautiful concubines. The two eunuchs, Gao Li-Shi and Pei Li-Shi, who were serving YANG, informed her of her humiliating position.

Furious and depressed by the news, YANG decided to have the banquet alone and ordered the eunuchs to serve the alcoholic drink. YANG showed various stages of intoxication, her jealousy and bitterness, and her intention to forget all the unhappiness. She pretended at first that she was not drunk, but gradually was out of self-control. She scorned the eunuchs when they tried to help. She tried to stand up but was forced to lean on the table for support. When she tried to walk, her steps faltered and her legs were unsteady, and eventually had to be supported by her maids.

The two eunuchs were feeling sad and feared that she might ask for more alcoholic drinks. They felt they ought to refuse to serve more but they couldn't. To quiet YANG, the eunuchs told her that the Emperor had arrived. When she discovered that the Emperor was not coming she became angry again. She ordered one of the eunuchs to go and commanded the Emperor to drink with her. When the eunuch refused to do such she got his face slapped. Taking off the eunuch's hat she placed it on her own head and pretended to walk like a man. Then she threw it at the eunuch.

The eunuchs gradually persuaded her to return to her chambers, and she finally agreed and staggered away assisted by her maids.

For dishes decorated with an identically central design, please see:

(A): a firing flaw, a fleabite and fine crazing to the glaze.

(B): two fleabites, a Y-shaped glaze hairline to the centre (not visible on the reverse) fine crazing to the glaze.

(A): a firing flaw, a fleabite and fine crazing to the glaze.

(B): six fleabites, four frits and a hairline.

(C): a firing flaw, a fleabite and two frits. 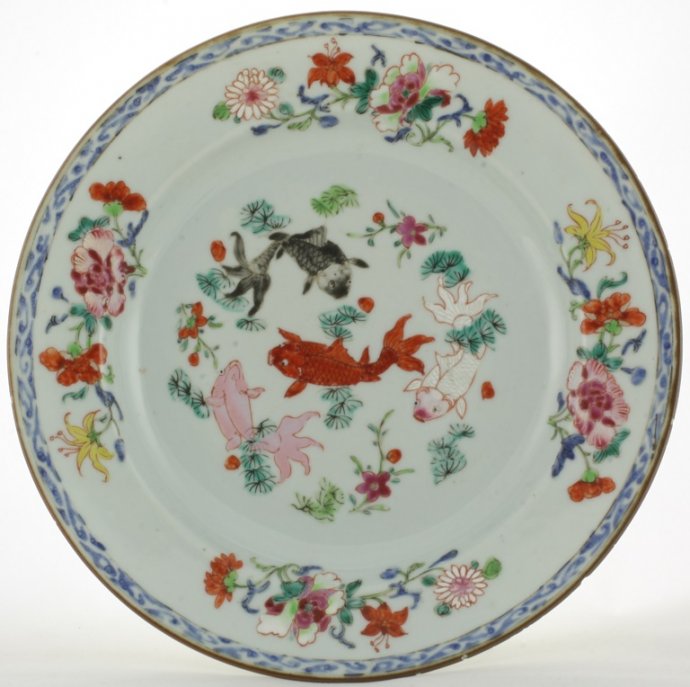 Dish on footring, flat rim. Decorated in various famille rose enamels, gold and other overglaze enamels, with four carp among water plants. On the sides and rim four flower sprays. The reverse is undecorated. On the base a rectangular paper collectors label that reads: '74'.

From 1745 onward, Dutch East India Company VOC records mention "fish bowls". The name "fish bowl" is somewhat misleading, since it reminds one of goldfish. But naturally here a dish is meant, intended especially to serve fish. In papers from 1752/3 we encounter both terms: the same object is sometimes called "fish bowl", at other times a "fish dish". They are always easily recognisable by the decoration: four carp among water plants. Once again, there are three types: blue-and-white, Imari and enamel colours. The blue-and-white kind has been purchased on the merchants own initiative, for it does not occur in the order for 1750. There are four smaller dishes to match each fish dish, of course with the same pattern, to be used for shrimps or butter, according to the order for 1750. (Jörg 1986/1, pp.82-85)

Condition: A hairline, two chips, one with a connected hairline and some tiny frits, all to the rim. 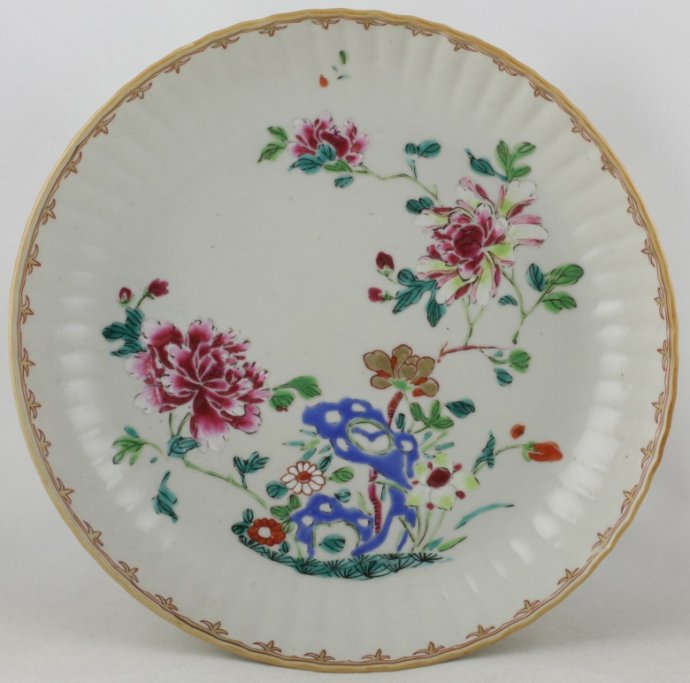 The term famille rose was first coined by the 19th-century French author Albert Jacquemart, who distinguished between specific groups in his descriptions of Oriental ceramics. (Jörg 2003/2, p.25)

After c.1730 famille rose rapidly succeeded famille verte as the mainstyle of enamelling for the Western export markets. About half of the regular export assortment of the Dutch East India Company, (Vereenigde Oost-Indische Compagnie, VOC) and other companies consisted of 'enamelled' wares, as polychrome porcelain was generally called then, with the pink enamel dominant in a palette which also included green, iron-red, yellow, brown, black, overglaze blue and details heightened with gold. These more ordinary wares were less refined and not so well painted but nevertheless sold very well in Europe. (Jörg & Van Campen 1997, p.206)

Condition: Some firing flaws and a tiny frit to the footring. 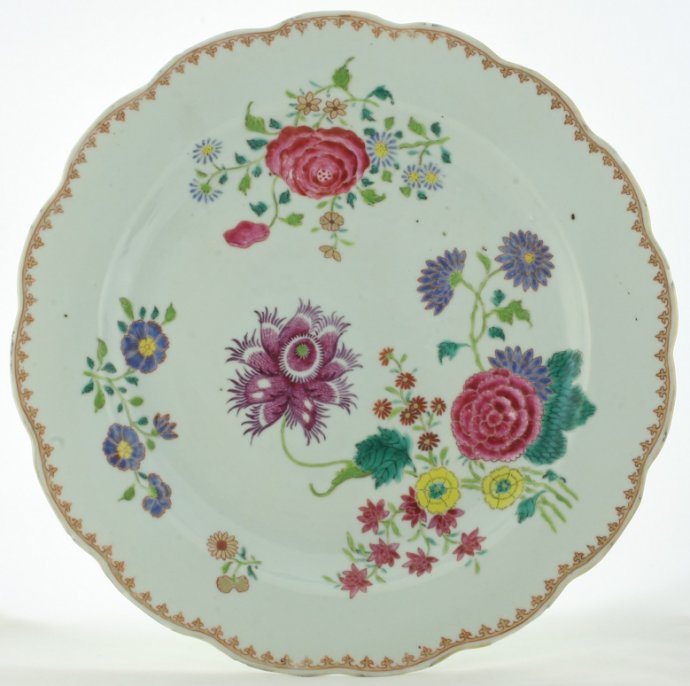 Large dish on footring, flat rim with a scalloped edge. Decorated in various famille rose enamels, iron-red and gold with scattered 'German flowers'. Around the rim a spearhead pattern border. The reverse is undecorated.

This decoration was closely copied by the Chinese porcelain painter from a Meissen or other factory example.

The term 'famille rose' was first coined by the 19th-century French author Albert Jacquemart, who distinguished between specific groups in his descriptions of Oriental ceramics. (Jörg 2003/2, p.25),

Condition: Some glaze rough spots to the rim and a chip to the base.