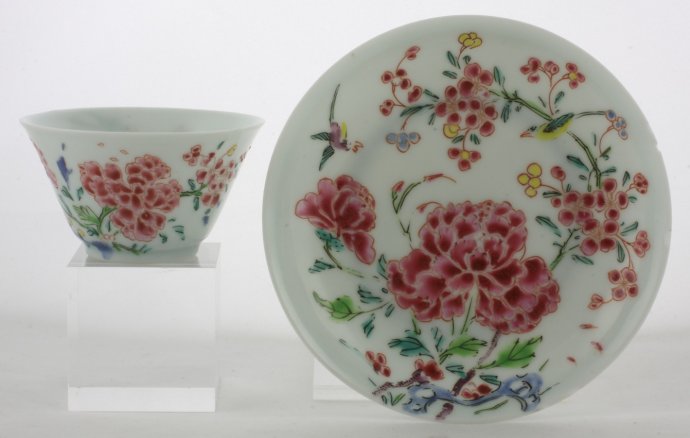 Teacup and saucer on footrings, slightly everted rims. Decorated in various famille rose enamels with a large flowering peony growing from taihu (garden) rocks and two birds, one in flight the other perched on the branch of another flowering plant. The teacup is decorated en suite. 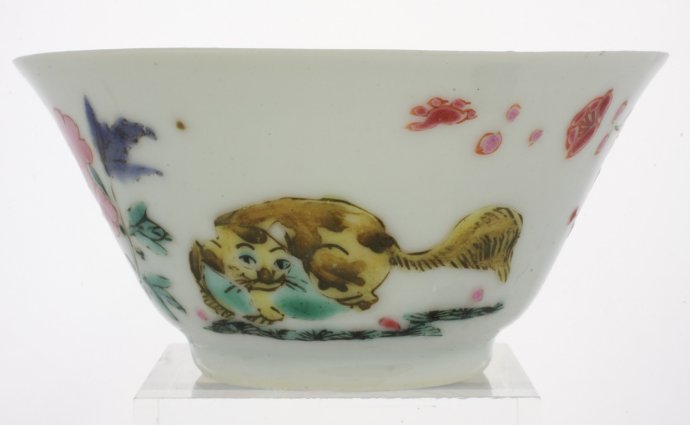 Teacup on footring, spreading sides and rim, Decorated in various famille rose enamels with a large flowering chrysanthemum spray and a cat. The cat is watching a bird perched on a branch of a flowering prunus tree. On the bottom a single flowering stem.

Condition: A frit and a tiny fleabite to the rim. 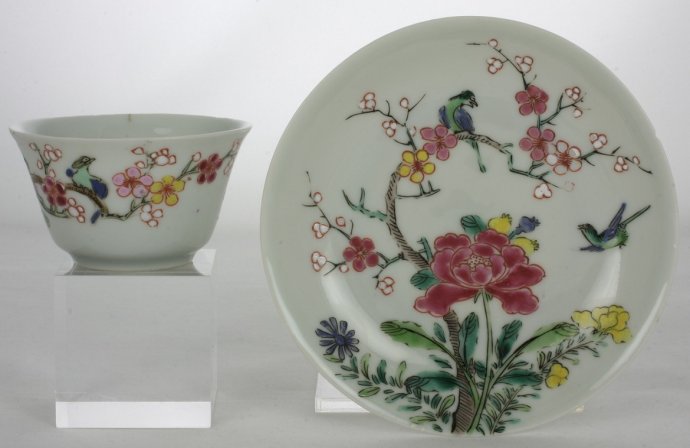 Teacup and saucer on footrings, slightly everted rims. Decorated in various famille rose enamels with a  flowering peony plant and prunus tree and two birds, one perched on a branch of the prunus tree the other in flight. The reverse is undecorated. The teacup is decorated en suite.

Teacup: Some enamel loss, a popped bubble of glaze, two very tiny fleabites and a firing flaw to the rim..

Saucer: Some enamel loss and a frit with a short connected hairline to the rim. 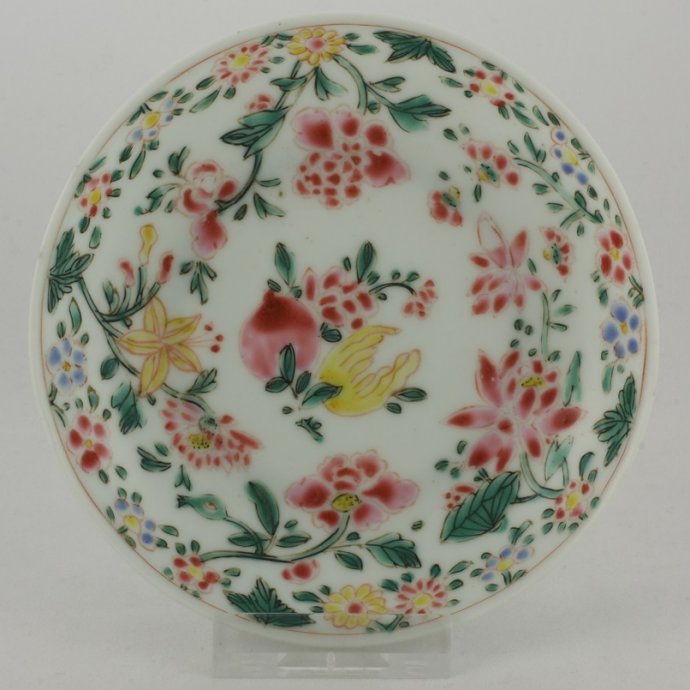 The fingered-lemon or 'Buddha's-hand citron' (Citrus medica) is a small, open citrus with distinctive fruit, native to the foothills of the Himalayas. Around 320 BC, Greeks and Romans used the fruit as a source of fragrance and the leaves as a moth repellent. The fruit has also been used for centuries to perfume clothes and rooms, as ornaments in religious ceremonies and is appreciated for its medicinal qualities." This explains why the Chinese treated it as a precious decorative object in the old days. When the pomegranate ripens it opens up and exposes lots of seeds inside. Chinese people like its pretty appearance, signifying many offspring /children to come. (I am indebted to Mr S. Fan for this information)

Condition: A frit and three very tiny fleabites to the rim. 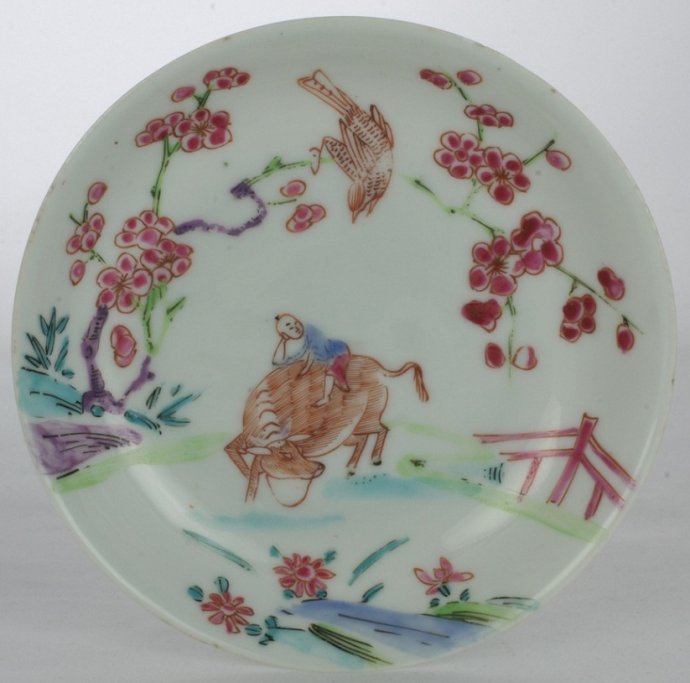 Saucer on footring, slightly everted rim. Decorated in various famille rose enamels with a little boy resting on the back of a buffalo in a fenced garden landscape, observing a bird perched on a branch of a blossoming prunus tree. The reverse is undecorated.

Condition: A hairline and tiny fleabite to the rim. 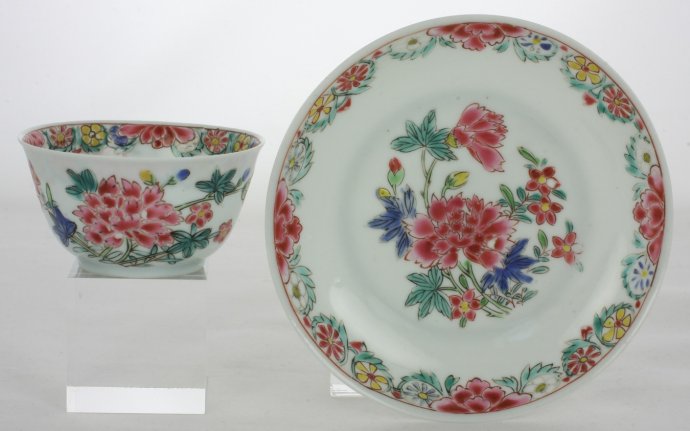 Teacup: A firing flaw with a tiny connected hairline to the footring and some enamel loss.

Saucer: A tiny fleabite to the rim and some enamel loss. 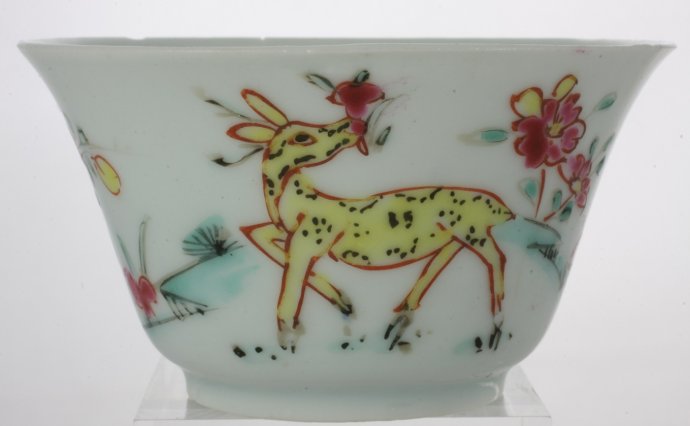 Teacup on footring, slightly flaring rim. Decorated in various famille rose enamels with a deer holding a lingzhi in its mouth and a crane with a peach in its beak. in between lingzhi with a prunus and a flowering chrysanthemum tree growing from taihu (garden) rocks. On the bottom a single lingzhi.

In Daoist mythology the spotted deer are considered auspicious animals connected to immortality. This is because they were believed to attain great age. Furthermore, they were the only animals able to locate and eat the special fungus of longevity, lingzhi. These special mushrooms were found on the paradise islands of Penglai. In Chinese mythology the Penglai mountain is often called the base of the Eight Immortals, or at least where they travelled to have a banquet. In Chinese art the spotted deer usually accompanies Shoulao or Magu, the God and Goddess of Longevity. Because of all this, even today the horns of deer have an important place in Chinese medicine and can be found in every Chinese apothecary shop. The soft internal part of the horns is dried, pulverised, and made up into pills. The inferior parts are boiled up into jelly or tincture.

The connection between the crane and the peach can be explained by the ancient Chinese Taoist god of long life and luck, Shoulao, (the popular name for Shou-xing), the stellar deity of longevity, is usually portrayed with an enormous head, carrying a long staff and a pumpkin gourd, which contains the water of life. In his other hand he holds the peach of immortality, sometimes with a crane of top.

Condition: Two tiny frits and hairlines to the rim. 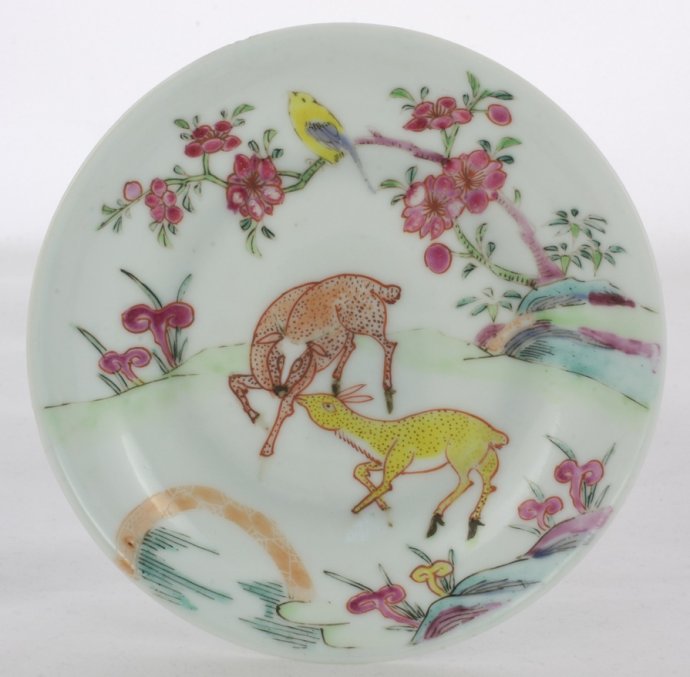 Saucer on footring, slightly everted rim. Decorated in various famille rose enamels with two deer in a landscape with funghi and a bird perched on a branch of a blossoming prunus tree. The reverse is undecorated.

The spotted deer design symbolises best wishes for a career as an official and good fortune and prosperity. This is because the Chinese word for deer, lu, has the same sound as the word for the high salary of a Chinese official. Another reason for the association with Chinese scholar-bureaucrats or literati is that one of the concluding rituals of the provincial examinations that had to be passed if one was to become an official in the Chinese civil service was a party known as the Banquet of Auspicious Omens, ore more literally the Deer-cry Banquet.

Condition: A hairline and three tiny fleabites to the rim. 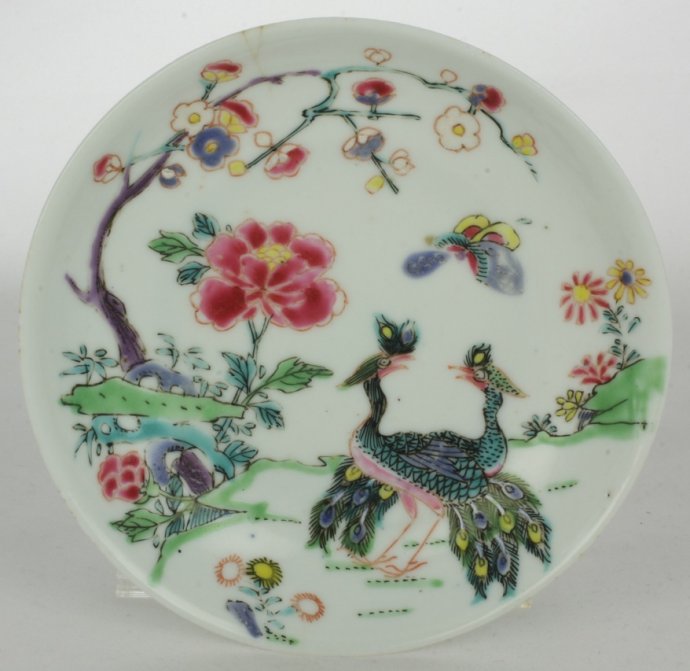 Saucer on footring, slightly everted rim. Decorated in various famille rose enamels with a garden landscape with a flowering peony and prunus tree growing from taihu (garden) rocks, two peacocks and a butterfly in flight. The reverse is undecorated.

In China, the peacock, was a symbol of the Ming Dynasty. The Chinese equated the peacock with divinity, rank, power, beauty, dignity, and the desire for peace and prosperity. The hidden or implied meaning behind this decoration is that a pair of peacocks are a devoted couple which fly side by side in the heavens and are like flowers with interlocked branches on earth. The pair symbolize mutual affection between lovers.

Condition: Two hairlines and some very tiny fleabites to the rim. 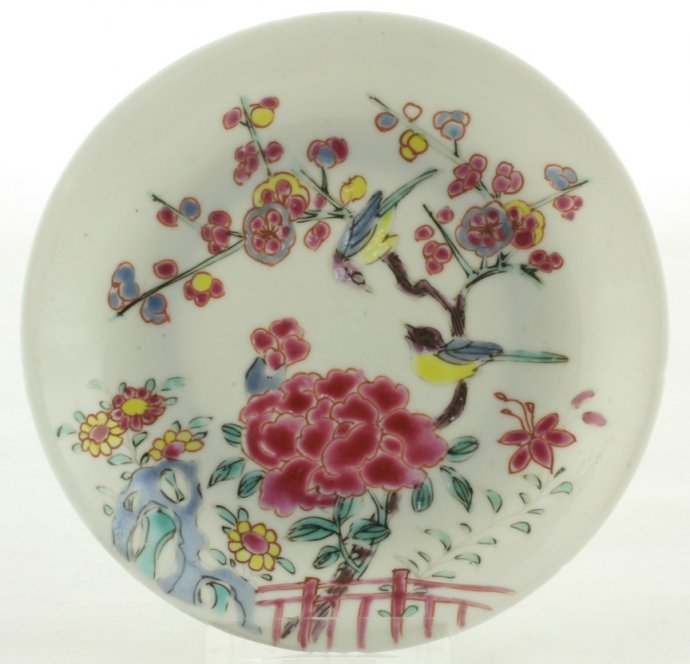 Saucer on a footring, slightly everted rim. Polychrome decorated in various famille rose enamels with a flowering prunus and chrysanthemum tree growing from taihu (garden) rocks behind a fence, two birds are perched on the branches of the prunus tree. The reverse is undecorated.

Condition: To frits and a chip to the reverse rim.