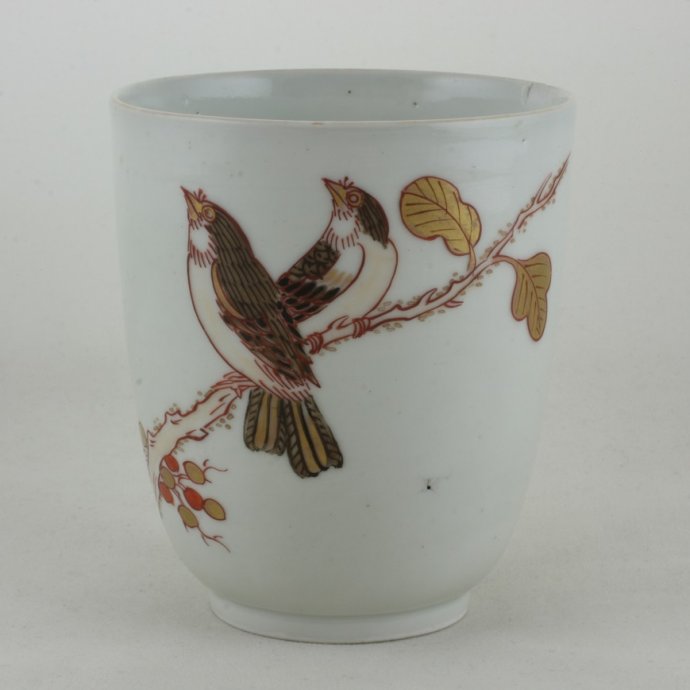 Beaker on footring, straight sides. Decorated in iron-red, black enamel and gold and with two birds perched on a branch of a flowering tree and a poem in Chinese format/style with a square seal mark.

Golden morning glow covers the sky, so glittering and bright.

As the sun rises, its colour is getting burning red.

Birds perch on a branch that sticks out alone straight and high.

(The pretty flower contrasts with the broken clouds)

This rare beaker, its shape/form deriving from the early 18th century, was not export ware but made for the internal (literary) market. The poem, clearly very intellectual, is written with beautiful calligraphy. The square seal mark imitates the seal on a scroll. Its function is not yet clear to me it may have been used at a tea ceremony as an exotic (for its form) object.

The Groninger Museum has a very similarly decorated bowl in its Oriental Ceramics collection, please see:

Condition: A chip to the rim. 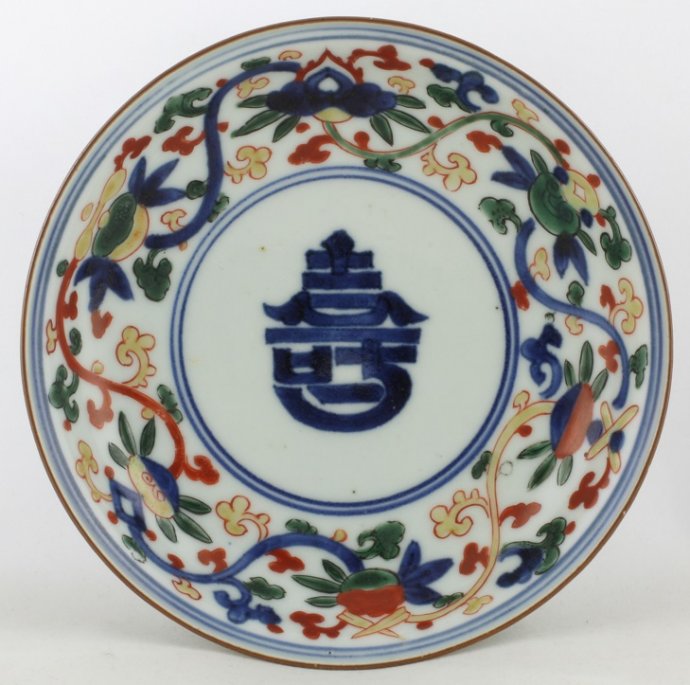 Saucer on footring with a flaring rim, the edge in underglaze brown, and a glazed base. On the base a single spur-mark. Ploychrome decorated in underglaze blue with overglaze iron-red, green, black and yellow enamel with a central ju or kotobuki (long life) character (identical to the Chinese shou character). The sides and rim with scrolling foliage with precious symbols. On the reverse lingzhi alternating with roundels filled with lingzhi and scrolling foliage. Marked on the base with the six-character mark: Da Ming Cheng hua nian zhi, (Prepared during the Chenghua reign of the Great Ming Dynasty (1465-1487)) in underglaze blue.

The ju or kotobuki character and lingzhi are considered emblems of longevity (long life) and derived from Chinese designs.

For an identically shaped, sized and decorated saucer, please see;

For an object similarly decorated with a central ju or kotobuki character, please see: 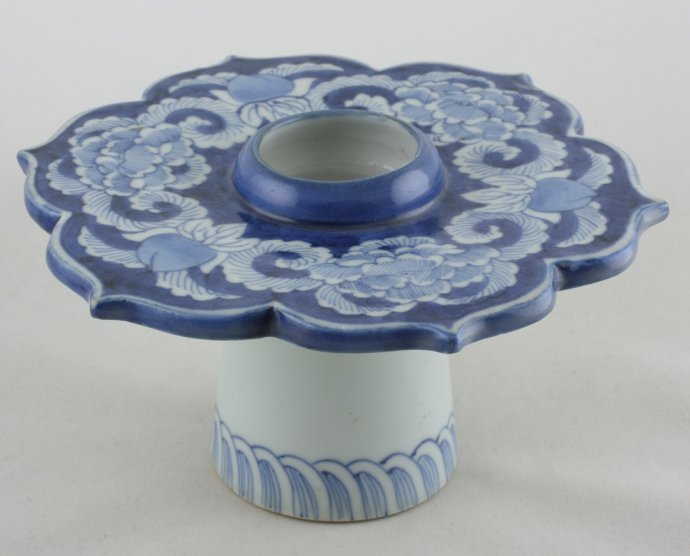 Exhibited: The Lost Century, Japanese Arita Porcelain 1720 - 1820 in Britain. Exhibition at the Fitzwilliam Museum, Cambridge, January 20 to April 5 1998, and at the National Museums of Scotland, Chambers St. Edinburgh, April 23 to July 1998.

Cupstand on high stem. Decorated in underglaze blue. The petals with a reversed decoration of a curved camellia stamen ring a raised ring in the middle intended for a cup (now missing) with a wide footring to be placed outside the ring. Round the foot of the stem a waves pattern border. On the base a red rectangular paper label that reads: "THE LOST CENTURY" Exhibition - 1998 Cambridge & Edinburgh Loan Number:" and the hand written number : '121' in black ink.

There are examples in the Shibata collection resembling this piece. No cups are known. This piece may have been copied from the Korean, or nearer home, Hirado - or the fashion may have been taken in a general way from Hirado. This dark blue contrasty style with typical drawing style, is an example of one of the early 19th century derivatives of the Dark Blue Ground series. Formerly in the collection of Mrs E. Walter. (Finch 1998, p.23, cat. 237)

Leaving aside the latter as to contentious, let us consider the two " centuries". On the whole, the "seventeenth century" is clear enough, beginning with the start of export trade and lasting until the high quality market was destroyed by competition from Jingdezhen (and possibly Meissen and Chantilly).This clear enough in economic terms; comparison of prices of the same shapes and sizes of Japanese and Chinese wares sold by the East India Company's auctions in London in the early years of the eighteenth century demonstrate that the Japanese wares were about four times that expensive as the Chinese.

The greater expense of Japanese porcelain had not mattered when it was novel - it was high fashion and worth paying for. Chinese Imari may, as I have suggested, killed that. This is not clear as it might seem, for the major production of the output of most of those European factories that imitated oriental wates, even in the 1740's, was of the imitation of Kakiemon style porcelain.

All the same, the market clearly changed in the third of fourth decade of the eighteenth century and not in Japan's favour.

So what was made in the "eighteenth century", the ''lost century'' (1720-1820) of the title of this exhibition? Circumspice. The exhibition shows and extraordinary range of porcelains that have hitherto tented to be dismissed as ''late'', ''por quality'', ''imitations (of what?)'' without careful consideration.

Nor, from a European perspective, do we know how or when these porcelains arrived in Europe. One variety is claimed only to be found in England; if this is so then how did these pieces get here? Who shipped them from Japan? It seems unlikely that the Chinese continued to purchase Japanese porcelain for sale to European East India Companies other than the Dutch, after about 1720 or so; the production of Jingdezhen, let alone that of the Southern provinces, was so much greater than that of Arita and prices were correspondingly lower. Officially the Dutch shipped no porcelain to Europe between 1757 and 1795; trade must have been the allowed private trade by servants of the Company, or illicit. 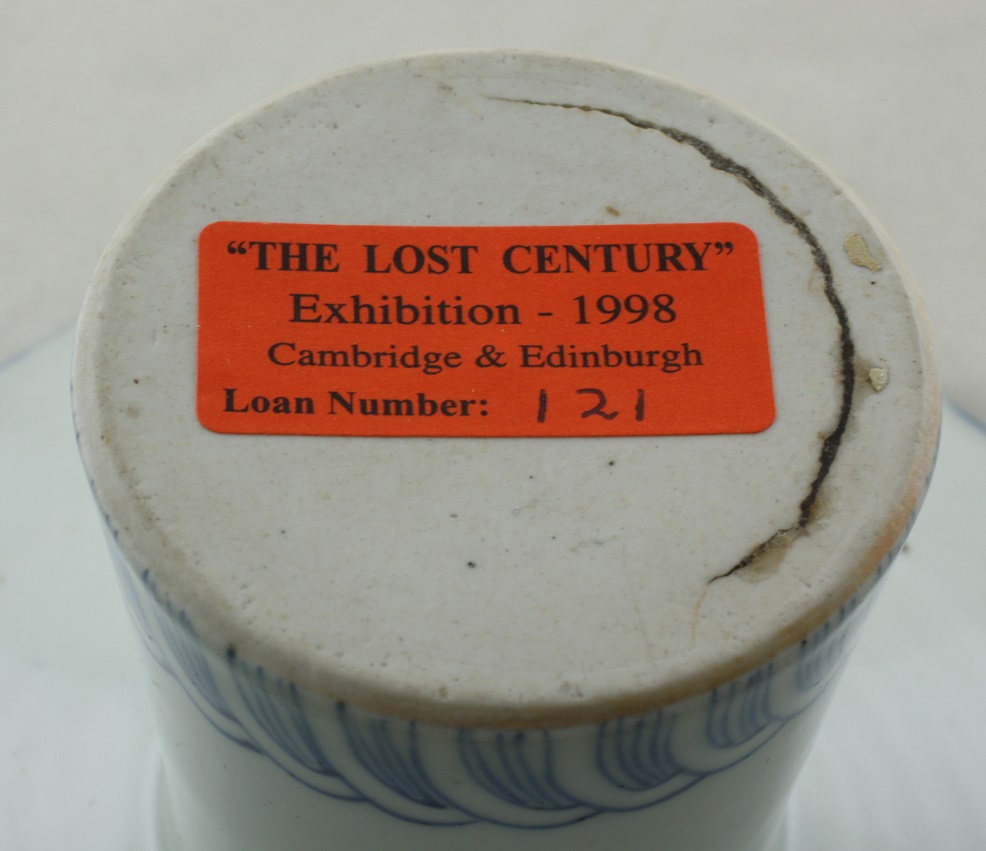 On the base a red rectangular paper label that reads: "THE LOST CENTURY" Exhibition - 1998 Cambridge & Edinburgh Loan Number:" and the hand written number : '121' in black ink.

For the cupstand in the exhibition catalogue, please see:

Condition: A firing flaw to the base, some glaze rough spots to the tips of some petals and a chip to the underside of one petal. 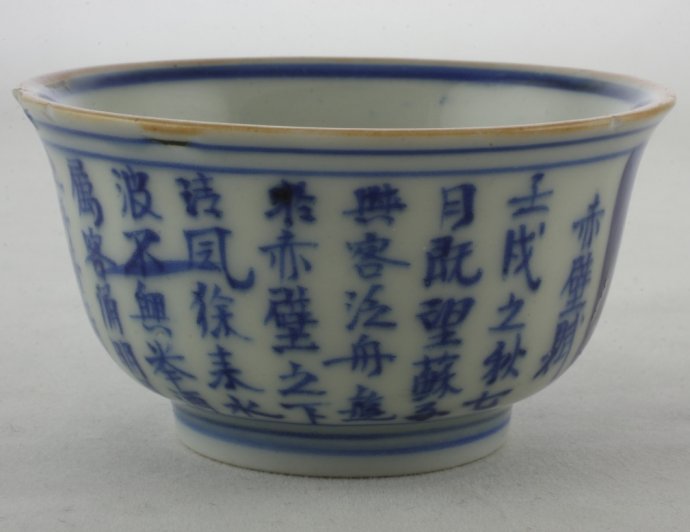 Exhibited: Object 2011095 is on display at the exhibition 'China Character, The Story on Porcelain' held from 31 March to 22 October 2017 at the Gemeentemuseum Den Haag, The Netherlands.

Small bowl on a wide unglazed footring, straight sides with a slightly flaring rim, the base is unglazed. Decorated in underglaze blue with a moonlit riverscape and a constellation of stars (indicating that this scene was taking place at night) with the poet, Su Shi (Su Dongpo,1037-1101) and his companions in a boat which approaches the shore of the 'Red Cliff' to the left. On the other side an abbreviated version is written in the calligraphic style of the standard script, Chinese 'kaishu' (Chinese script is read from right to left in vertical columns) of 'The Red Cliff Ode', (chi bi fu), two Chinese prose poems written by Su Shi (Su Dongpo,1037-1101). The first 'The Red Cliff Ode' was written in the summer of 1082.

Ströber states that the poems were written when the poet was in exile in Huangzhou in the modern province of Hubei. It tells the story of a boating trip of Su Shi with guests over the Yangzhi-river in 1082. The men are at leisure, drinking wine, playing the flute while the boat is drifting beneath the red cliffs on the water. They engage in a philosophical discussion about the shortness of life and the changing and changeless aspects of things. The second poem is the description of another journey to the 'Red Cliff' which the poet undertook a couple of months later. The theme of the poem of the 'Red Cliff' as a decorative motif for porcelain appears on numerous objects of the 17th century and was particularly popular with Chinese scholars. Fitski states that in 18th-century Japan a strong movement was devoted to Chinese culture. This had originated in the mid 17-th century when, after the fall of the Ming-dynasty in 1644, various intellectuals and monks fled from southern China to Japan. The influence of their intellectual legacy created a renewed interest for Chinese culture, Confucius studies, poetry and painting. It also led to a renewed popularity of the image of the scholar as a hermit or as an unadapted person. Especially for officials, often unsatisfied by the way Japanese governmental control was being executed, the scholar who, in solitude, could devote himself to calligraphy, poetry or art was an idealistic image. The movement also had an influence on the decoration of porcelain. On a Japanese dish we see a similar depiction of the Red Cliff journey. The appreciation of Chinese motifs continued until the Meiji period; this teacup is a mid 19-century interpretation of this scene. (Ströber 2001, pp.104-105), (Fitski 2002, pp,46-47)

Bowls with this scene also appear on two still-life paintings dated 1627 and 1638 by the French artist Jacques Linard.(source: aziatischekeramiek.nl)

Chinese bowls from the Transitional and Kangxi periods with a similar decoration are not rare; some examples, admittedly of poor quality, were salvaged from The Hatcher Junk, c.1643, please see:

For a Ming bowl with similar decoration, please see:

For a Zhangzhou (Swatow) bowl with similar decoration, please see:

For a special bowl from the Kangxi period decorated with the first and second prose poems (Chinese fu) of The Red Cliff Ode (chi bi fu), please see:

For a brush holder from the Kangxi period decorated with overglaze gold on a powder-blue ground with the first and second prose poems (Chinese fu) of The Red Cliff Ode (chi bi fu), please see:

Condition: A chip, two frits, a fleabite and an unglazed spot to the rim.

Donated to the collection of Oriental Ceramics of the Groninger Museum, Groningen, The Netherlands.