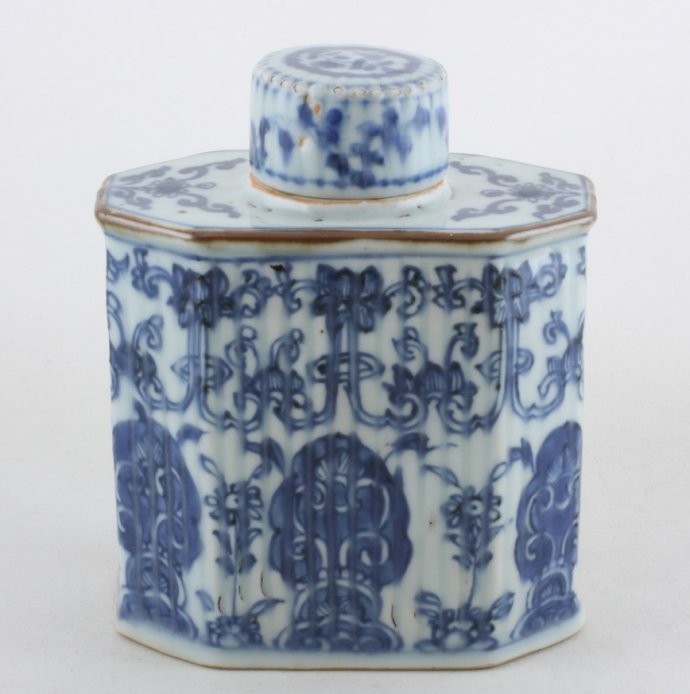 Tea caddy of rectangular form with canted corners, a ribbed body on a flat unglazed base. On the flat top an unglazed cylindrical mouth with a lid fitting (original) cover. The tea-caddy with an underglaze brown-edged rim (jia mangkou). Decorated in underglaze blue. On the ribbed body and shoulder an overall decoration of flowering lotus buds and other flowering plants. On the sides of the cover flower sprays and on top a single flowering stem.

Condition: Some firing flaws to the base and glaze rough spots to the edges of the ribbing of the cover. The cover has been professionally restored after being broken in two. 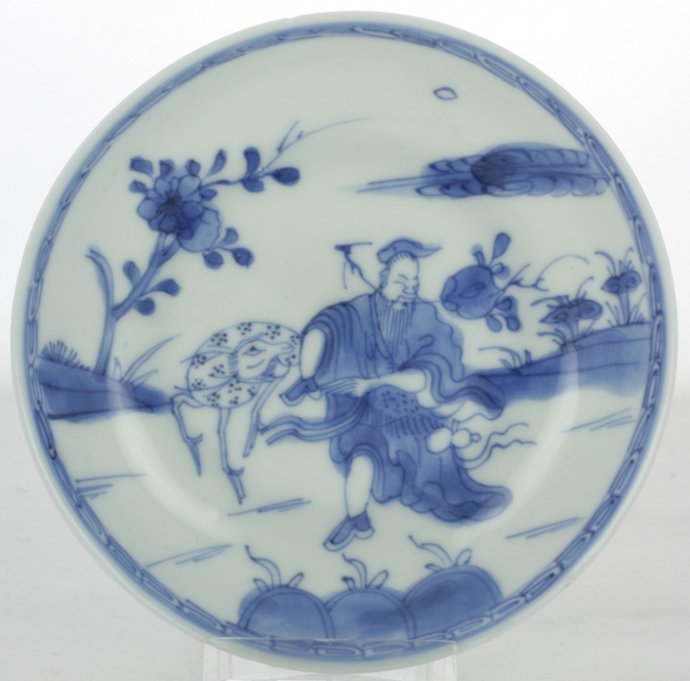 Saucer on footring, slightly everted rim. Decorated in underglaze blue with Zhongli Quan (Master of the Eight Immortals) and a spotted deer in a landscape with rocks, flowering trees, lingzhi, clouds and the sun. Around the rim a spiral pattern border. The reverse is undecorated.

Zhongli Quan, the Master of the Eight Immortals, used to be a general during the Han dynasty (206 BC-AD 220), but he eventually retired into the mountains and attained immortality. He is generally shown with a feather fan used to revive the dead (and sometimes holding a peach), an attribute which, according to the Daoists, is used as a magical instrument, able to give life and destroy evil. (Ströber, 2011, pp.150-153)

Condition: Two hairlines and three tiny fleabites to the rim, a frit to the footring. 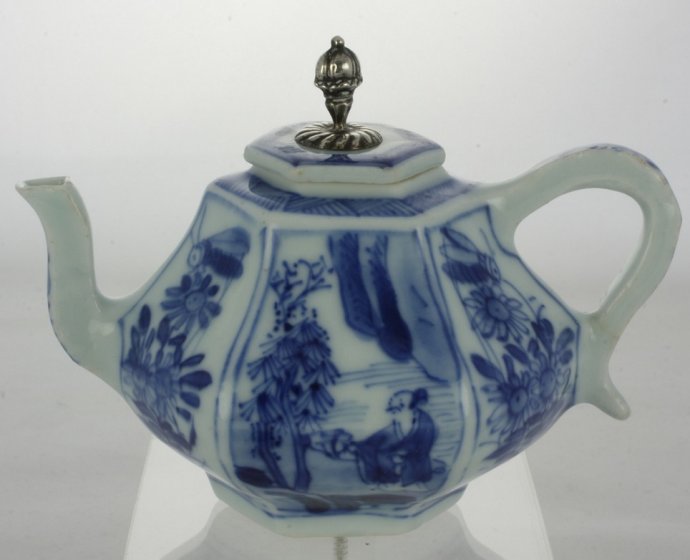 A small hexagonal shaped teapot on a hexagonal foot. Curved spout, C-shaped handle.  Decorated in underglaze blue with vertical panels filled with a figure sitting in a riverscape and flowering plants with an insect. Around the flat shoulder a zig-zag lines border and on the spout and handle a single flowering stem. On the cover a zig-zag lines border. The original lion-shaped knob has been replaced by an unmarked silver knob.

Condition: A restored cover and underside of the handle, a firing crack to the handle. 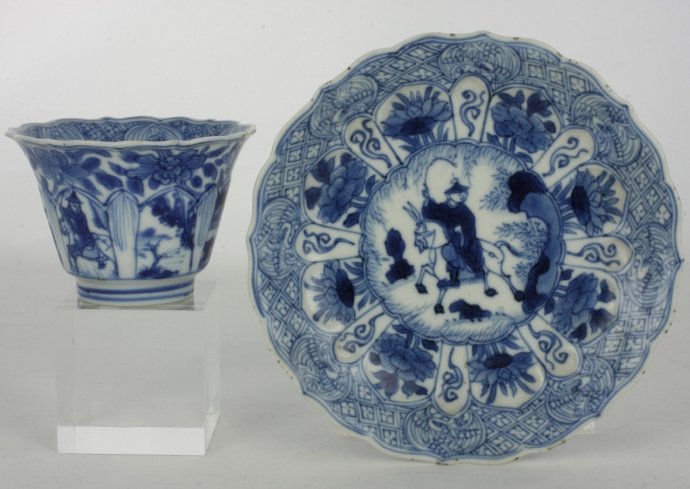 Condition saucer: A fleabite, a frit and a few < 1 mm (0.039 inch) spots on the rim, caused by popped bubbles of glaze during the firing process.

Not illustrated object 2010552, another identically shaped, sized and decorated, sold teacup and saucer. 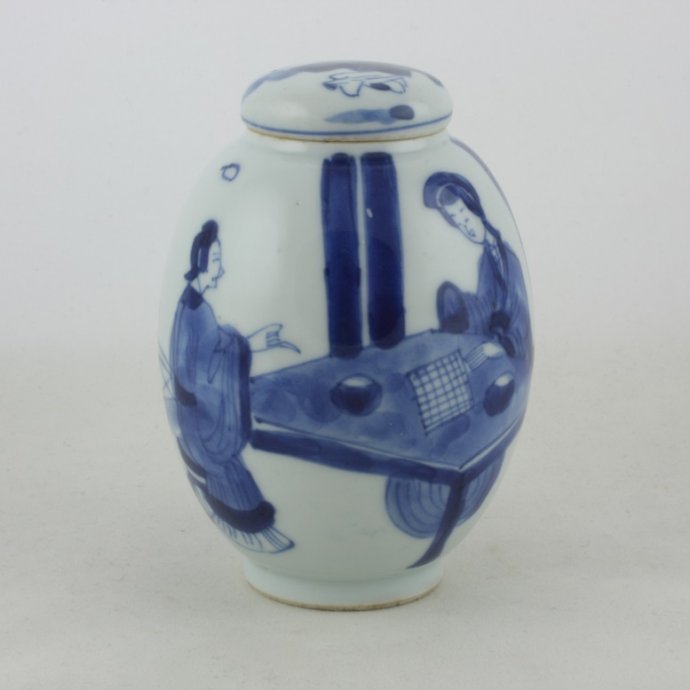 Barrel shaped jar on footring with a domed cover. Decorated in underglaze blue with two 'Long Elizas' seated at a table playing 'Weiqi' in a fenced garden landscape. On the cover a dancing boy, his arms in the long sleeves of his garment.

On this jar we see the two characters Yingying and Hongniang passing time playing Weiqi, a traditional strategic board game that in the West is better known by its Japanese name Go. In Imperial China it was played by the members of the educated elite. This underlines Yingying's social status. (Düsseldorf 2015, p. 218, cat. 123.3 & Suebsman 2019, p.47)

'Weiqi' or encircling chess is one of the oldest forms of chess. Chess (Weiqi or Go in Japan and the West) is one of the four arts in China. They are qin (the guqin, a stringed instrument. 琴), qi (the strategy game of Weiqi), 棋), shu (Chinese calligraphy 書) and hua (Chinese painting 畫). (Hartog 1990, p.72, cat. 59, wikipedia)

The scene of 'Long Elizas' is characteristic of Kangxi export porcelain and was much copied in Delft. (Jörg 1984, p.158)

Condition: A firing flaw, fleabite, frit and two tiny short hairlines to the inner rim of the cover. Two shallow chips and a fleabite to the inner footring. 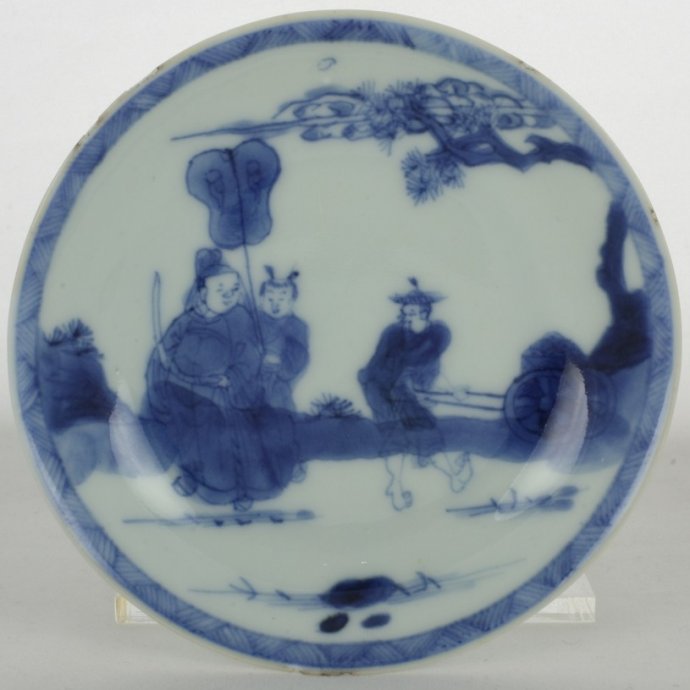 Saucer on footring, slightly everted rim. Decorated in underglaze blue with a military man with his servant holding a fan. Both stand near a pine tree looking at a farmer pushing his cart filled with goods. On one side rockwork and on the other a pine tree with clouds and the sun. Around the rim a zig-zag lines pattern border. The reverse is undecorated.

The scene on this saucer illustrates an episode from the famous Xi Xiang Ji, a comedy play in eight books by Wang Shifu (c.1250-1300) generally translated as the 'The story of the Western Chamber'. The story goes as follows. The talented but improvised student Zhang Sheng meets the beautiful Cui Yingying while she is staying with her mother and a maid in a monastery. The mother opposes a marriage but, thanks to Hongniang, the maid, a secret affair develops. When the mother detects this, she is furious. The lover is sent to the capital to seek literary success and after a while returns triumphant to claim his bride. Episodes from this story are the source of many of the figural decorations on porcelain of the 17th and 18th centuries. (Jörg & Van Campen 1997, p.158, cat. 172)

The scene on this saucer  illustrates an episode from book six in which Zhang takes his farewell of Yingying and her maid Hongniang in order to travel to the capital, where he will be taking his public service exams. That is the condition set by Yingying's mother for her consent to their marrying. Zhang's sedan-chair stands ready while his servant prepares the luggage (the pile of scholary books). (Jörg 2011/2, p.101, Scene 20) 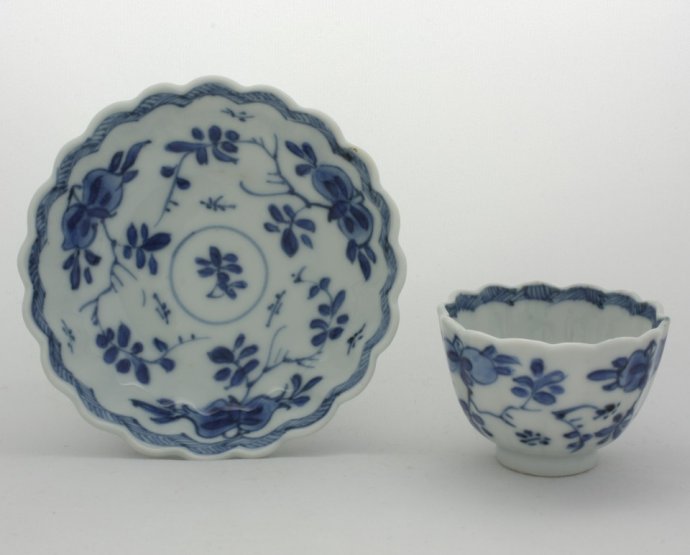 Teacup and saucer on footrings with ribbed sides and lobed rims. Decorated in underglaze blue. In the centre of the saucer a flower spray in a central roundelircle, on the sides, three branches with pomegranates and insects in flight. Round the rim a zig-zag lines pattern border. On the reverse two flower sprays. The teacup is decorated en suite.

Condition teacup: Perfect, a tiny spot on the rim, caused by a popped bubble of glaze during the firing process.

Condition saucer: Perfect, a firing flaw to the inside of the footring. 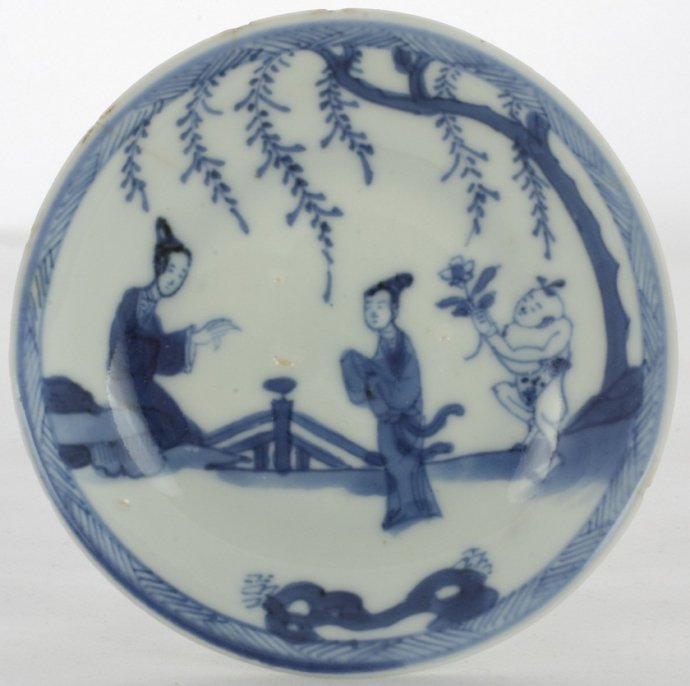 Saucer on footring, slightly everted rim. Decorated in underglaze blue with two 'Long Eliza' figures, one seated and one standing, in a fenced garden with an almost naked "dancing little boy" or "zotje" holding a flower. On the rim a zig-zag lines border. The reverse is undecorated.

Condition: Four tiny hairlines and three tiny frits to the rim and a firing flaw to the reverse.