Sometsuke is a type of blue-and-white porcelain-ware that was produced during early 17th century in privately owned kilns in Jingdezhen a town in Jiangxi Province, China. Ko-sometsuke the prefix 'Ko' meaning 'old', is the Japanese name for Sometsuke imported from China to Japan. Though sometsuke was not made using high quality clay or glazes, the free-spirited decorations and designs made it popular in Japan. They were particularly sought after by tea-ceremony masters to be used as utensils. (source: E-Budo.com, J. Lindsey.) 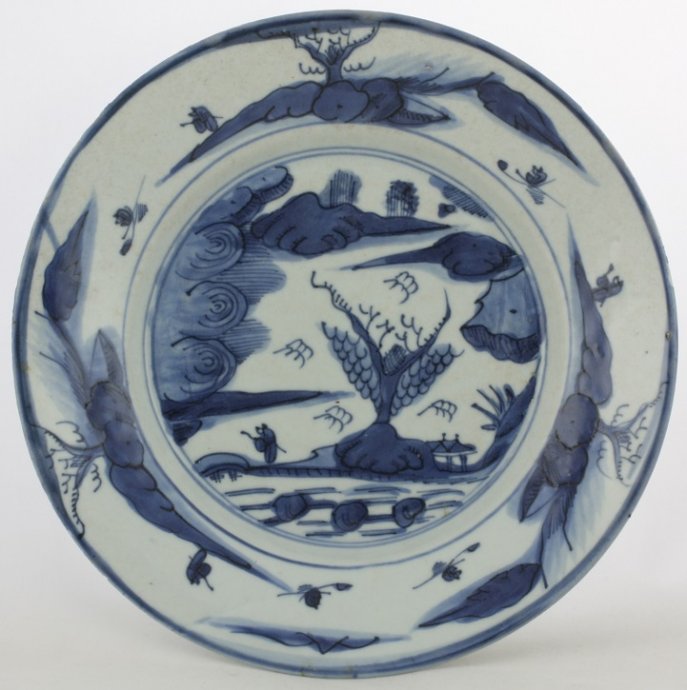 Dish on footring with a flat rim. Some kiln sand adhering to the footring. Decorated in underglaze blue with a figure in a river scene with a pagoda, trees, mountains and clouds, on the rim three river scenes with a figure on a shore looking at a boat. On the reverse three flower sprays.

In Japan porcelain began to be made on a small scale in Kyushu in the early 17th century, the main products being objects used for the tea ceremony. As this custom spread in Japan, the need for these special plates. dishes, bowls and other pieces grew and was partly met by imports of Chinese porcelain, Kraak wares among them. They are called 'Ko-sometsuke', 'old blue and white'. These pieces were most likely produced at the same kilns that made Kraak porcelain, since the bodies of the two types have many characteristics in common, including the mushikui or 'moth-eaten' rims. The way they are painted is also comparable, although the subjects are different. The Japanese liked irregular shapes and non-symmetrical designs which were not confined in panels but spread all over the surface, with or without a border. In addition to blue and white pieces enamelled wares also became fashionable. These are called aka-e, literally 'red painting' by the Japanese. Production of these wares ceased about 1650, due to the civil wars raging in China. (Jörg & Van Campen 1997)

Condition: A firing flaw to the exterior wall and some very shallow 'mushikui' or moth-eaten glaze rough spots to the rim. 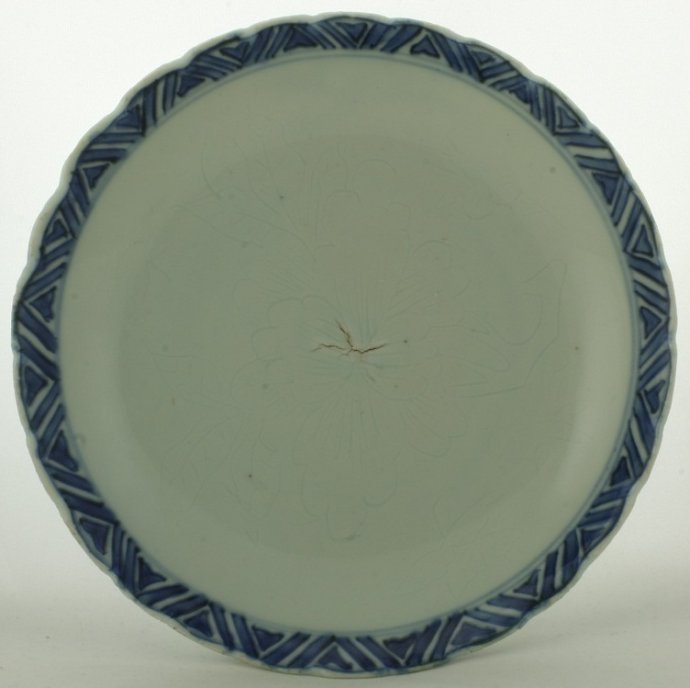 Dish on footring with straight sides and a lobbed rim. Decorated in underglaze blue. In the centre a magnolia has been incised into the porcelain, around the rim a border of alternating triangles, on the reverse rim three sprays of flowering branches filled with a ruyi head. Marked on the base with the six-character mark: Da Ming Cheng hua nian zhi, (Made during the Chenghua reign of the Great Ming dynasty (1465-1487)), in a double circle.

Condition: A glaze chip and some, what the Japanese call "mushikui" or moth-eaten, tiny rough glaze spots to the lobbed rim, also a firing flaw to the centre, visible on both sides of the dish.