China has a long tradition of ceramics manufacture. The earliest pieces date from prehistoric times, when pottery was used as a burial offering or for the purpose of preserving food. The burial culture became increasingly important under the Han and Tang dynasties. Miniatures of buildings and objects from everyday life accompanied the dead to the next world.

Many technical and artistic innovations arose during the Song dynasty. Green celadon, white qingbai, greyish blue junyao, and the vividly painted cizhou pottery are characteristic of this period. Ceramics became a favoured collector's item at the imperial court and among the elite.

The first porcelain was developed in China. Cobalt import from Persia enabled the production of blue paintings under the glazing. Jingdezhen evolved to become the centre of the porcelain industry, which stood under imperial patronage. As a result of its high quality, porcelain from the Ming period became a desired export commodity and an important source of income. (Source: Keramiek Museum Princessehof, Leeuwarden) 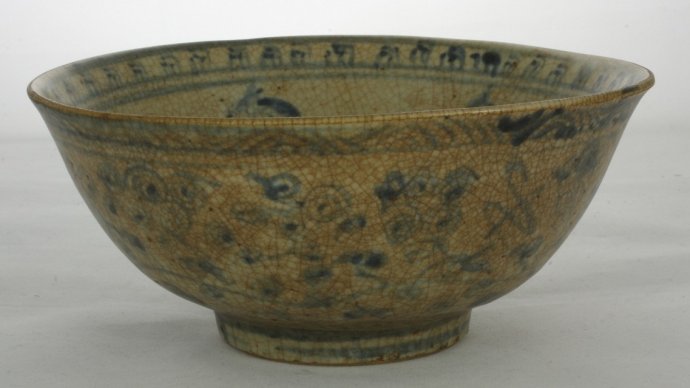 Bowl on footring, slightly everted rim. Decorated in underglaze blue with a floral scroll design. On the bottom two animals in a double circle. On the base a rectangular paper collectors label that reads '6'. Finely crackled glaze.

Condition: Two frits to the rim and a chip to the inner footring.