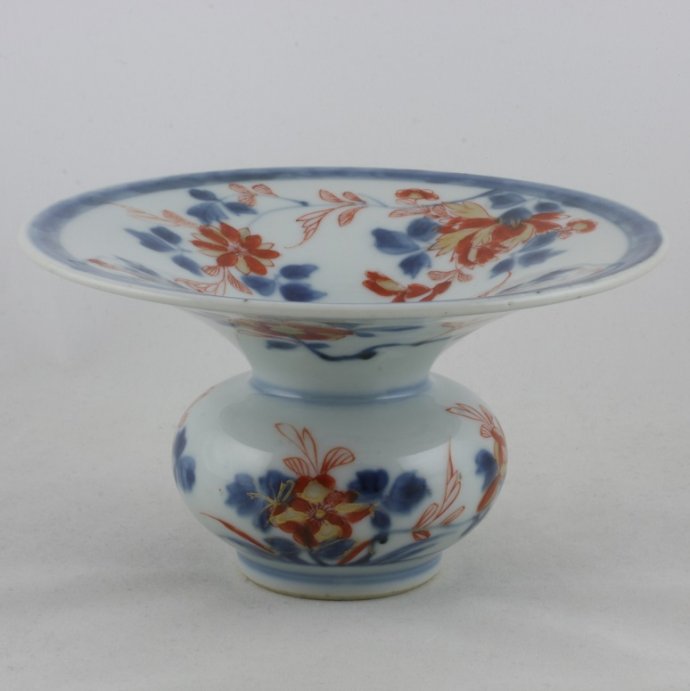 Cuspidor or spittoon on footring. Globular body, narrow shoulder, the upper part shaped as a bowl with straight, wide-spreading sides. Chinese Imari, decorated in underglaze blue, iron-red and gold. On the body and inside the bowl two groups of flowering plants. On the outside of the bowl two wide spread flower sprays.

The cuspidor or spittoon was indispensable when chewing tobacco. Chinese spittoons were introduced into the export assortment around 1700, competing with the slightly earlier Japanese pieces. They usually have a spherical body, a shape borrowed from Chinese vessels which had originally been used as vases for a single lotus flower.(Jörg & Van Campen 1997, p.118) 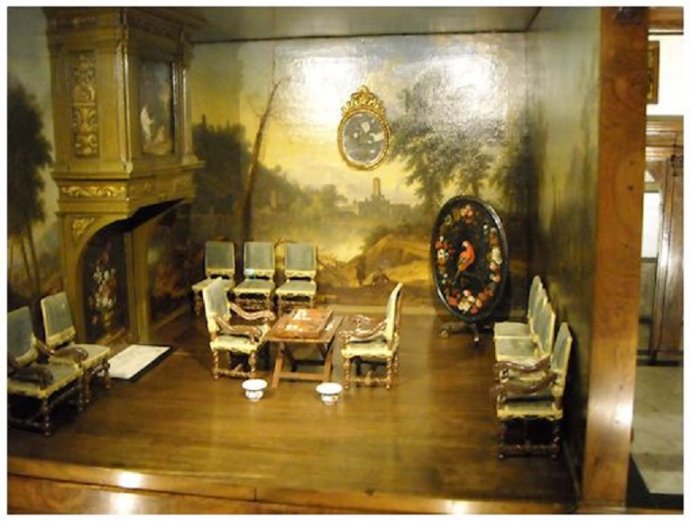 Condition: A popped bubble of glaze to the reverse rim and some tiny shallow rough spots to the footring. 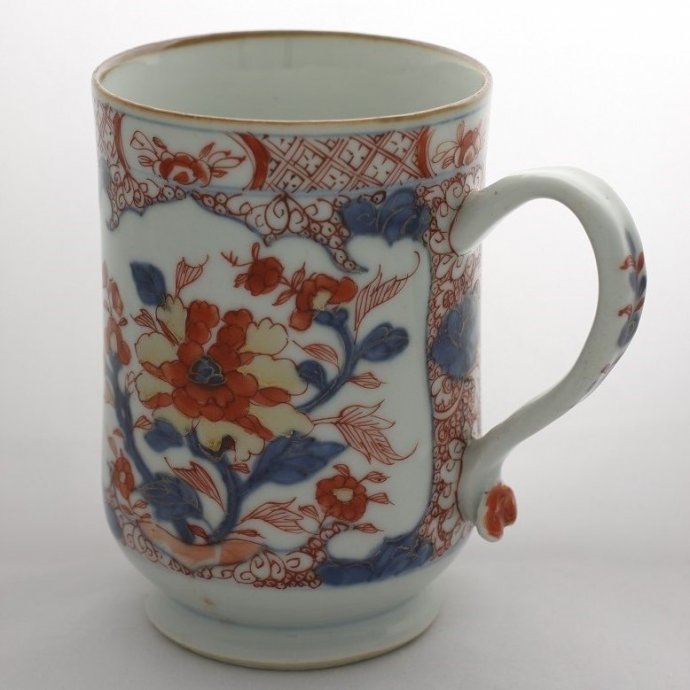 Tankard on footring. C-shaped handle and an underglaze brown-edged rim (jia mangkou). Chinese Imari, decorated in underglaze blue, iron-red and gold. The cylindrical sides are decorated with two panels filled with a flowering peony tree. In between the panels flower heads on a whorl pattern ground. On the a trellis pattern border with four reserves filled with flower heads. A single flower spray on the C-shaped handle which ends in a ruyi-shaped ornament.

For a similarly shaped and decorated tankard, please see:

Condition: Two firing flaws to the outer footring, a fleabite to the rim and a frit to the underside of the ruyi- shaped ornament. 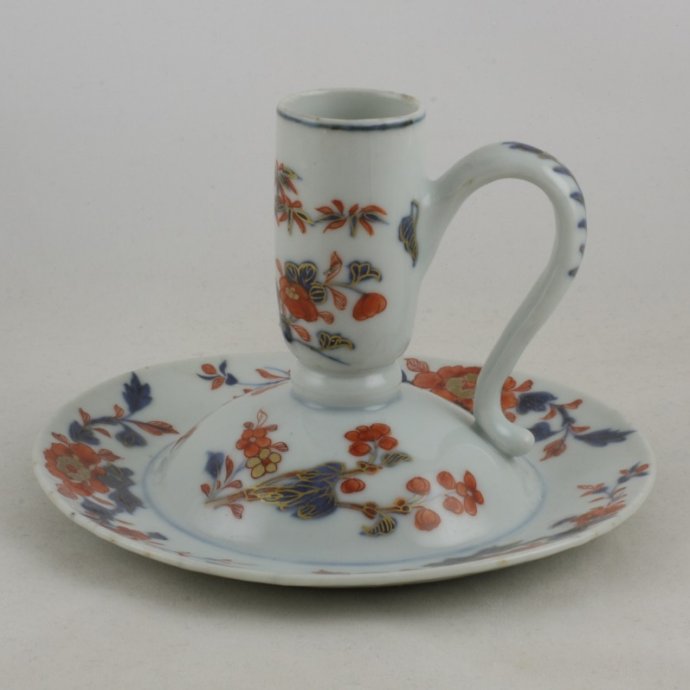 Chamberstick on footring swelling base with a flat rim, cylindrical candle holder with C-shaped handle. Chinese Imari, decorated in underglaze blue, iron-red and gold on the flat rim with three peony flower sprays, on the swelling base two groups of flowering cherry and on the cylindrical candlestick holder, a taihu (garden) rock with flowering peony, bamboo and iris plants. On the handle a single flowering stem.

The VOC (Dutch East India Company) started to order Chinese porcelain in European shapes as early as 1634. Ewers, beer mugs, candlesticks, salts, mustard pots and other objects for the Dutch table were made after wooden models, which served as moulds for the Chinese potter, or were copied from Dutch glass, ceramic or metal equivalents. Such pieces may justly be called Chine de commande, as they were ordered specially by Western clients. The term also applies to porcelain with Western decorations.

Producing porcelain after models to the taste and needs of foreign customers was no novelty for the Chinese potters. Since the 14th century they had been making all kinds of special objects for the Persian, Indian, South-East Asian and other markets, and this new Western demand merely expanded the range of non-Chinese shapes.

In the late 17th and 18th century demand for Western shapes rapidly increased and Europeans became such important clients that several kilns in Jingdezhen came to specialise in 'Western' wares, probably making nothing else.

The constant changing demands of customers and the frequent ordering of new shapes made it necessary to provide the Chinese dealers with models. The Dutch and other European merchants supplied objects of earthenware, porcelain, silver, pewter or wood for that purpose, but it was also common practice to send drawings of the desired shapes. Literally hundreds of such drawn models were made in the West and handed over to the Chinese porcelain dealers in Canton with specifications regarding measurements, the number of pieces to be made and how they should be decorated. These middlemen then sent the drawings on to the factories in Jingdezhen, where they would have been thrown away after use, so that only a very few have by chance been preserved.

The European companies preferred to buy in bulk the basic, ordinary wares for which there was always a steady market. Pieces of an unusual Western shape or finer items such as coolers, ewers and basins, bough pots and covered jars were seldom bought. The costs of ordering these objects, the attention they needed and the small numbers the European market could absorb made them less interesting to the companies as merchandise. To the independent Western merchant, however, these considerations did not mater, while members of East indiamen's crews filled their sea chests with exclusive porcelain in Western shapes.

In paklijsten (packing lists) of the Dutch East India Company, (Vereenigde Oost-Indische Compagnie, VOC) candlesticks are mentioned as part of dinner services. The candlesticks of the Pronk dinner service at the Palazzo Venezia in Rome are a beautiful example. This chamberstick clearly modelled after a portable Western metal flat chamberstick, could very well have been part of a large Chinese Imari dinner service. (Lunsingh Scheurleer 1989, pp.150-1532), (Jörg & Van Campen 1997, pp.252-253)

Although candlesticks were one of the earliest European forms chosen for copying (with the exception of the dinner service), these creations did not survive the 18th century in any quantity because they were too delicate for everyday use, in spite of their decorative appeal. Clearly this Chinese Imari chamberstick also proved to be too delicate for everyday use, luckily it has been professionally restored. (Howard 1994, p.216)

For examples of other chambersticks, please see: 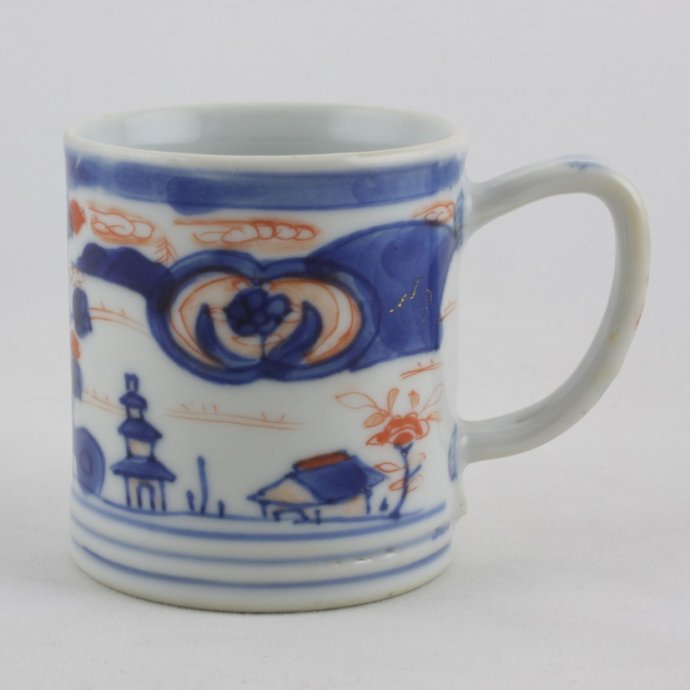 Small mug with handle on a flat unglazed base. Around the base three moulded circular ribs. Chinese Imari, decorated in underglaze blue, overglaze iron-red and gold with a riverscape with houses, pagodas, flowering plants, mountains, clouds and two kidney-shaped reserves filled with a flowering stem. On the handle a floret between scrolls. 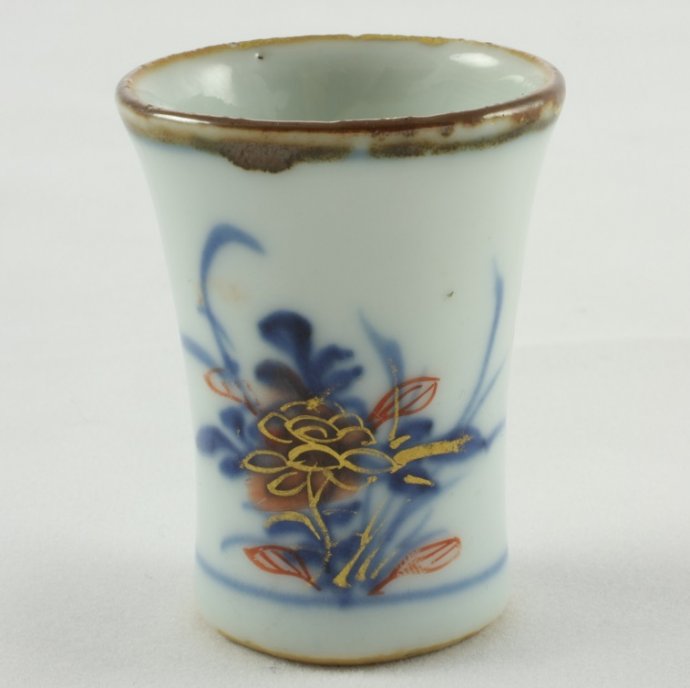 Small cylindrical beaker with spreading foot and mouth and an underglaze brown-edged rim (jia mangkou). The base is unglazed. Chinese Imari, decorated in underglaze blue, overglaze iron-red and gold with flowering plants and an insect in flight.

This small beaker derives its shape from European models, perhaps even to that of Dutch silver or pewter Communion - or marriage cups from the second half of the 17th century. This shape is extremely rare in Chinese export porcelain. The function is not yet clear, it may have been used for drinking "genever" (Dutch-gin). (Hartog 1990, p.150)

Condition: A circular firing flaw on the bottom, a Y-shaped glaze hairline to the inside (only visible on the inside). Some spots of popped bubbles of glaze on the rim caused during the firing process. 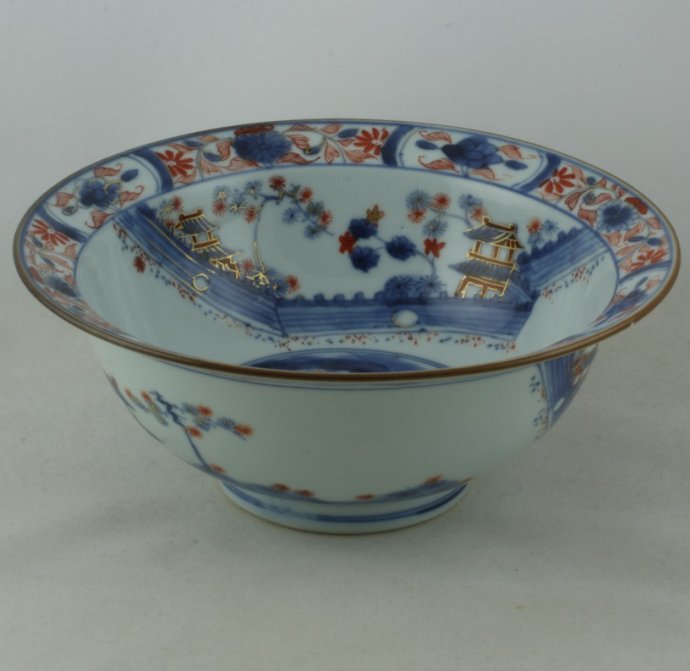 Bowls of this shape with a flat rim are traditionally called klapmuts in Dutch, comparing the shape with a cap with flaps. Rinaldi states that they were specially developed to meet a demand from European customers, who wanted to be able to rest their spoons in the bowl without damaging the edge. In fact, the form was already well-known, not as shallow bowls, but as late 15th-early 16th century large and fairly deep dishes in underglaze blue or as Song and early Ming celadon saucers and dishes. The klapmuts is just another variety in the gradual development of this type. (Rinaldi 1989, p.118), (Jörg & Van Campen 1997, p.60 & p.101)

The shape of this bowl (klapmuts) is unusual for its production time around 1720-1730.

The scene of houses and shrubbery near a river running before a crenulated wall is unusual in Chinese Imari ware. This type of decoration, with the brick wall and the pagoda is often referred to as the 'Chinese wall' while others think it is a Chinese fortress within walls. (Gordon 1977, p.47)

Condition: Firing flaws to the base and inner footring, a fleabite to the rim and a frit and fleabites to the footring.