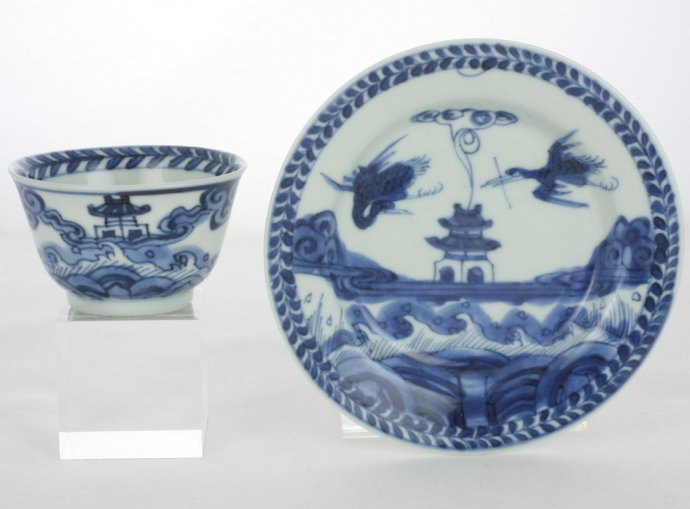 Teacup and saucer on footrings, the teacup with a slightly everted rim, the saucer with a flat rim. Decorated in underglaze blue with a pagoda with its chimney smoking on a shore and two cranes flying above wild waves, on the rims a stylised laurel border. The reverse of the saucer is undecorated. The teacup is decorated en suite.

The crane (Grus montignesia) itself is an auspicious symbol, representing longevity and wisdom. They accompany Daoist Immortals (xian, hsien) bringing from The Isles of Paradise the tablets in their beaks. A pair of cranes symbolizes 'Long Marriage' as cranes mate for life. (Pijl-Ketel 1982, p.279)

Teacup: Two tiny glaze fleabite and a hairline  to the rim.

Saucer: A firing flaw to the reverse.

More pictures of object 201099I, another identically shaped, sized and decorated, sold saucer >> 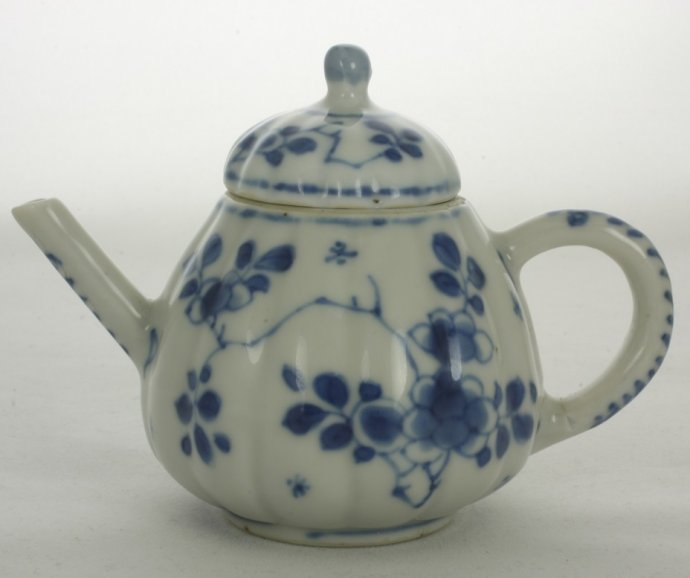 Teapot on footring, pear-shaped body with ribbing in low relief. Straight spout with curved C-shaped handle. Domed cover with round knob. Decorated in underglaze blue on both sides with flowering branches, on the handle and spout a single flowering stem. On the cover two flower sprays. 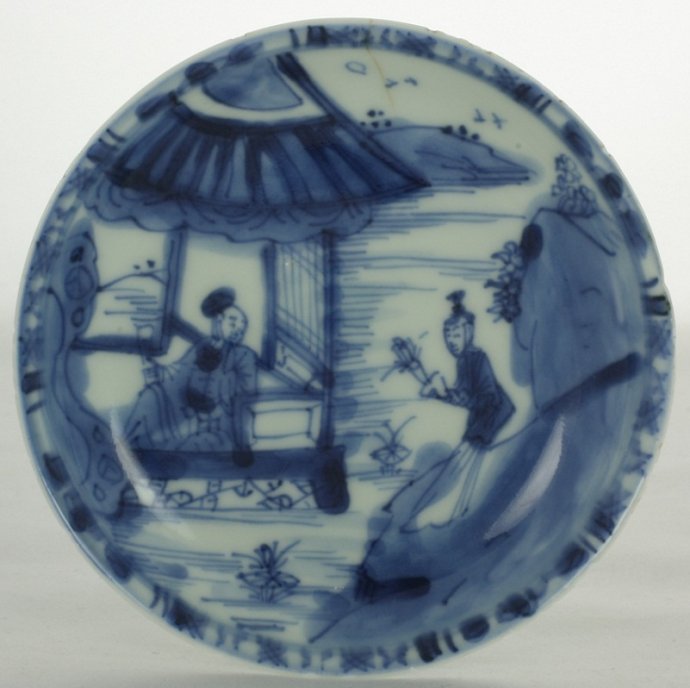 Saucer on footring, slightly everted rim. Decorated in underglaze blue with two figures in a landscape, a mean is sitting on a veranda and a 'Long Eliza' figure is holding a flower while standing near rockwork. The reverse is undecorated.

Condition: Some fleabites and a short hairline to the rim. 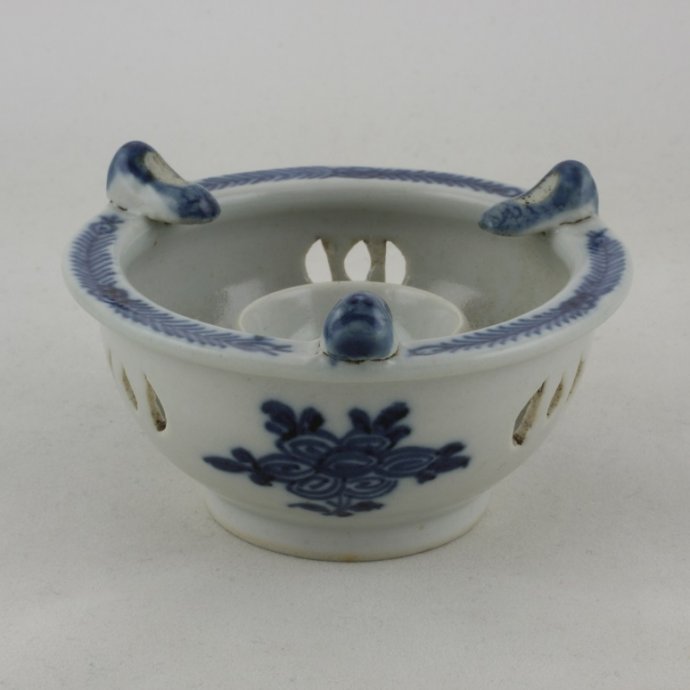 Burner on footring with straight pierced sides widening to the flat rim. On the flat rim three upright knobs as supports for a teapot / kettle. Inside, on the bottom, a small scale. Decorated in underglaze blue with a flowering plant alternating with a pierced section, on the flat rim three flower sprays. On the base the remains of a clothed wax (shop?) mark.

This burner might have served as a warmer for a tea- or wine-pot or even a dish.

For a Chinese kettle and stand, please see:

For other, examples of such burners, in Japanese porcelain, please see: 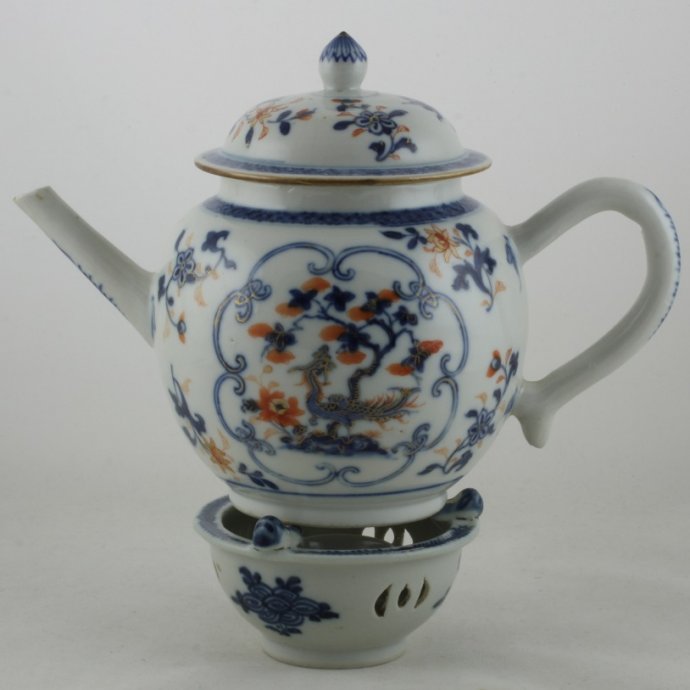 Suggested use for this burner, the teapot and cover are not included in this offer. 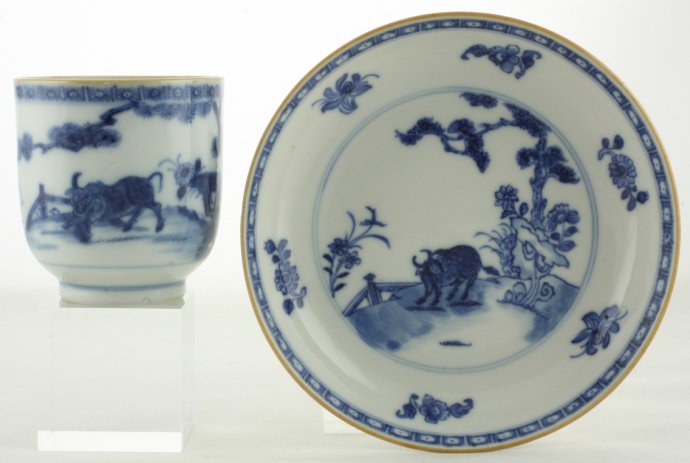 Coffee cup and saucer on footrings with straight rims, the tall cup with handle. The rims underglaze brown-edged (jia mangkou). Decorated in underglaze blue with an ox standing near a fence under a pine tree with a flowering peony plant growing from pierced rockwork. On the sides six lily sprays, chrysanthemum and peony branches, round both rims a narrow honeycomb pattern border. On the handle a single flower and besides the attachment of the handle to the cup a single chrysanthemum and peony spray. The reverse of the saucer is undecorated. The cup is decorated en suite. 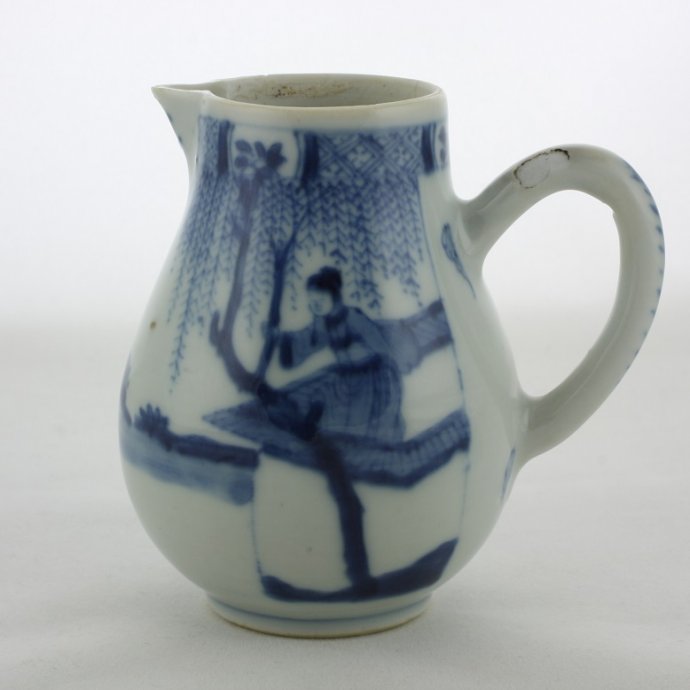 Milk jug on footring, pear shaped body with handle, small triangular spout at the rim. The cover is missing. The handle is placed opposite the spout. Decorated in underglaze blue with two ladies standing in a garden landscape observing a man leaping over awall. Round the rim a trellis border with cartouches filled with flower heads.

On this milk jug we see the probably best-known scene of the Romance. Zhang climbs over the wall which separates his home from Yingying's abode by way of a willow. In her room in the west wing of the building, the Western Chamber, the two of them finally become intimate. (Suebsman 2019, p.51)

For a similarly in polychrome enamels decorated objects, please see:

Condition: A firing flaw to the underside of the spout, a hairline and a glaze chip to the handle and the tip of the spout. 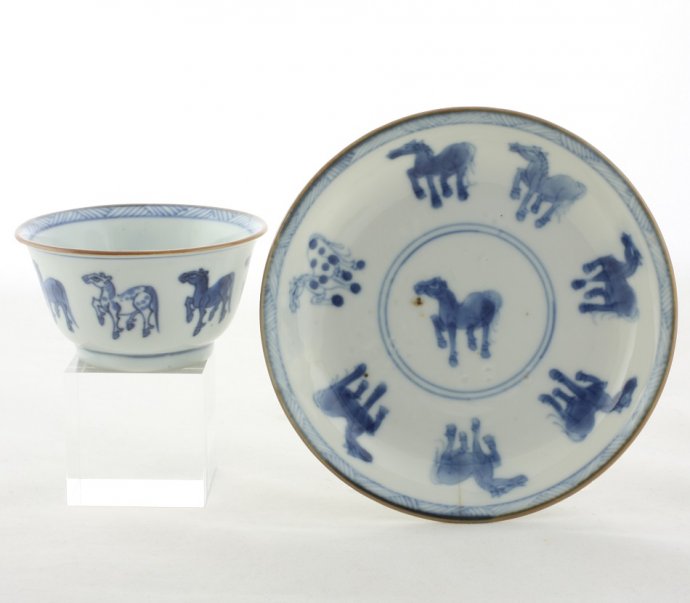 Teacup and saucer on footrings, slightly everted underglaze brown-edged rims (jia mangkou). Decorated in underglaze blue with a horse in a central roundel surrounded by seven other horses. On the rims a zig-zag lines pattern border. To the reverse of the saucer three flower sprays. The teacup is decorated en suite.

The horse, Equus caballus, is one of the Seven Treasures of Buddhism, and is one of the twelve animals of the Chinese zodiac. It plays an important part in Chinese history and culture, symbolising speed, power, energy and military status. Excellent specimens of horses came to China from Central Asia, where they were indigenous. They were highly appreciated in China and incorporated into Chinese culture. Many legends are connected with famous horses. One is the story of the eight horses of the Emperor Mù Wáng, a favourite subject of Chinese artists. Mù Wáng (r. 976-922 BC) was the fifth emperor of the Western Zhou dynasty (c.1046-256 BC) and is said to have wanted to visit the gardens of the western paradise of Xiwang mu, the Queen Mother of the West, and her famous peach orchards. He set out and travelled through the empire on a chariot driven by his charioteer Tsao Fu. The chariot was being pulled by eight horses each of which bore a distinguishing name and had different 'magic' powers, such as running without touching the ground, riding a cloud or having wings. (Ströber 2011, p.91), (Williams 1976, p.223)

In the Netherlands this particular design of the eight horses of Emperor Mù Wáng was reffered to as the paardenstoeterij, stud farm. (Hartog 1990, cat. 47)

For objects decorated with the eight horses of emperor Mù Wáng, please see:

Teacup: A shallow frit to the footring.

Saucer: Two frits and two hairlines to the rim. A frit to the footring. 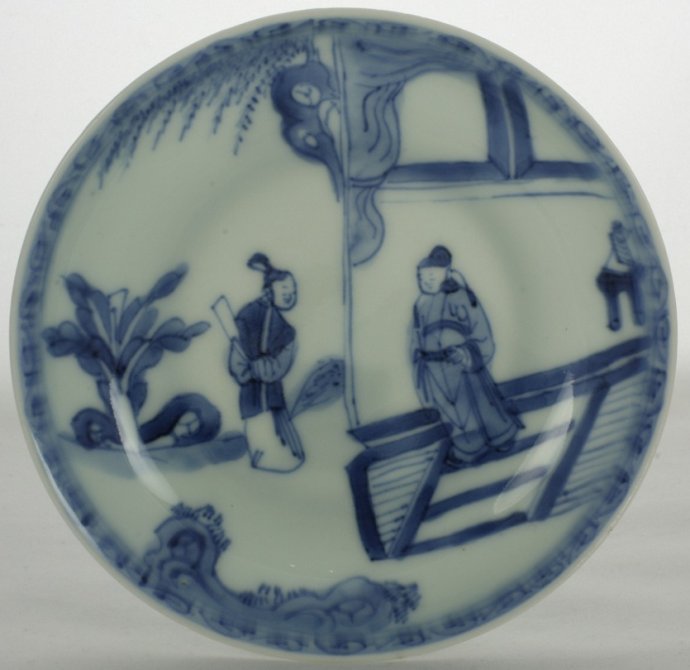 Saucer on footring, slightly everted rim. Decorated in underglaze blue with a man walking down a veranda stairs into a garden landscape towards a 'Long Eliza' figure near a banana plant. The reverse is undecorated.