From before the Tang Dynasty ceramic figures had been modelled in China - some depicting visitors from other countries - but the diversity of porcelain models introduced in the 18th century was far greater than ever before. Many were not based on figures, animals and birds known to the Chinese, but were copied from European models introduced by supercargoes and in competition with those already popular in Europe, particularly those made in Meissen. Since the European factories were anxious to increase their own sales, such variants made in China can only have been an attempt by the East India Companies and their servants to buy at advantageous prices - particularly from china shops in the West. (among the private cargo of the Dutch East India Company ship Geldermalsen, which sank January 3, 1752. a figure of a pheasant, and another complete bird were recovered, both most likely part of the contents of a merchant's 'permitted chest') The private trade greatly extended this brief by buying large numbers of other figures based on more domestic Chinese tastes, including Chinese deities, immortals, and animals, as well as parrots and other birds more familiar in the East than in Europe. The resulting exchange of ideas and patterns created perhaps the most interesting group of Chinese export porcelain. This is also the most difficult group of porcelain to date with accuracy, for the originals are sometimes obscure or made over a long period, and while some pieces are after European originals of known date, others are based on Chinese tradition or symbolism; while yet more are most easily dated by the figures that later copied them in Europe. (Howard 1994, p.247 & p.264) 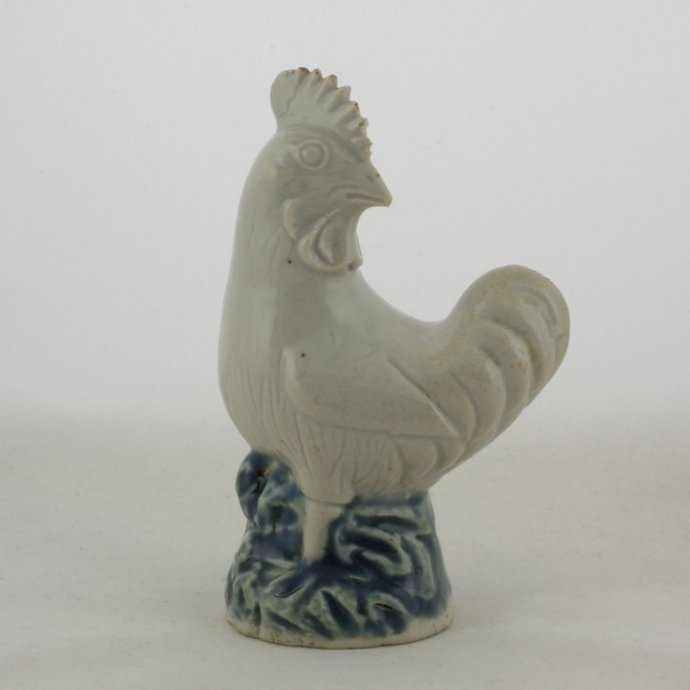 Figure of a cockerel

Standing cockerel with its head turned and right claw raised, on an underglaze blue-glazed rock support with a flat unglazed base, the feathers are lightly incised beneath the greenish-grey-toned glaze.

The very popular figures of cocks show an interest in bird or animal models, apart from their traditionally symbolic roles, that was relatively new in the eighteenth century; and they have been among the first produced in purely naturalistic rather than famille verte or famille rose colouring. This may be the reflection of a Western demand for such curiosities. (Howard & Ayers 1978, vol. 2, p.584)

Cockerels displayed singly or in pairs, were favoured among wealthy Europeans. No fewer than six pairs ornamented the library in the Chinese pavilion on the grounds of Drottningholm Palace in Sweden. Depictions of cockerels were also found in China as a symbol of courage, benevolence, and faithfulness; the homophone ji means both cockerel and fortunate. This Chinese symbolism of a bird of good fortune, embodied in these figures would have been largely lost on European private merchants, who would have bought them for their decorative value. (Fuchs & Howard 2005, p.180)

Condition: Various firing flaws to the rock, a frit to the base and glaze rough spots to the comb.