This type of porcelain with decorations painted in iron-red, gold and some black enamel, is traditionally called melk en bloed, (which literarily translates as milk and blood). Interestingly, in The Netherlands in the 18th century the name was also applied to a specific type of imported Indian chintz, with predominantly red decorations on a light ground. The composition and iconography usely conform to the normal export assortment of blue-and-white Kangxi porcelain of c.1700. The dating of early 18th century is confirmed by the existence of some Red & Gold objects in the collection of August the Strong (1670-1733). Apparently, this type of porcelain was popular mainly among the Dutch and the very few pieces that can be found elsewhere in Europe usually come from The Netherlands. (Lunsingh Scheurleer 1989), (Jörg 2002/2) 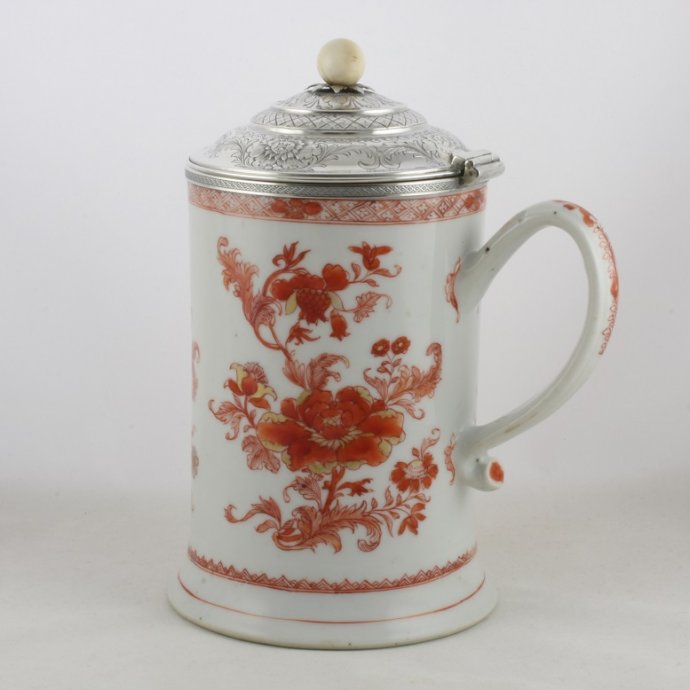 Tankard of cylindrical shape with a C-shaped handle and an unglazed base. Mounted with a 19th / 20th century Belgium silver mount (marked). Decorated in 'Red & Gold' / 'Rouge-de-fer' and gold on the glaze with three groups of flowering peony sprays. Around the foot a pointed leaves pattern border, the rim with a diaper pattern border with flower heads. On the handle a floret between scrolls.

The Belgium silver mount is marked; 'simonet' & '900'. 'simonet' refers to the Brussels based firm 'Simonet & Vansteeger' who specialised in silver work designs in the 19th and 20th centuries. '900' refers to the purity mark of the silver used.

The mug is undoubtedly copied from a European silver original. Europe had always used a wide variety of materials for drinking vessels, including silver, pewter, leather, horn, pottery and glass. Efforts made by merchants in the China trade in the 17th and 18th centuries to develop Chinese porcelain as an alternative material (both for drinking and for pouring vessels) met with varying success. The main rivalry was between porcelain and glass and while the use of porcelain for hot beverages has now become almost universal, for other uses it was to prove less successful. (Howard 1994, p.186 & p.193)

Condition: A firing flaw to the handle. 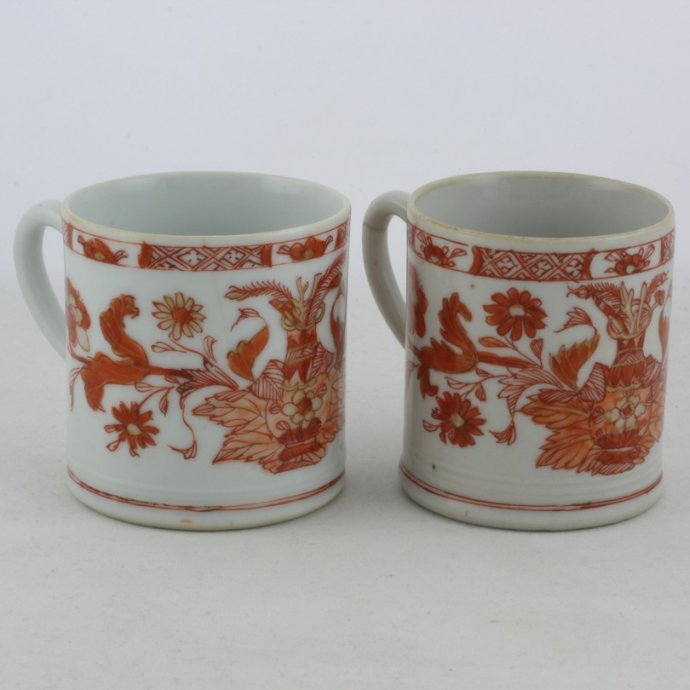 Two small mug with handle on flat, unglazed bases. Around the bases moulded circular ribs. Decorated in 'Red & Gold' / 'Rouge-de-fer' with iron-red and gold on the glaze with peacock feathers and coral branches in a large flower vase decorated with a flowering plant. The flower vase is placed on leaves and flanked by flower sprays. Round the rims a trellis pattern borders with four reserves filled with a half flower head. On the handles single flowering stems.

The large peacock feathers are a symbol of high rank, the coral branch stands for longevity. (Lunsingh Scheurleer 1974, p. 222)