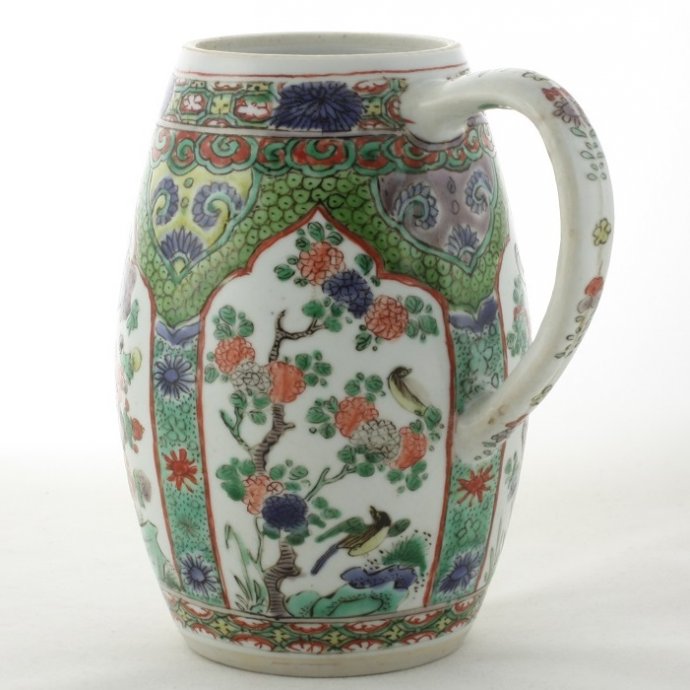 A barrel-shaped tankard on a footring with a large handle. The original cover is missing. Decorated in famille verte enamels, with around the foot a diaper pattern border with flowers, on the body four elongated, lotus-petal panels filled with flowering trees and flying birds, their tops reserved on a ground of frogs' spawn with four smaller reserves filled with flower heads and leafy branches. The bands in between the panels with green and black speckles with flowers. On the rim a diaper pattern border with flowers, and just below this border a ruyi motifs border. On the handle flower sprays. (Jörg & Van Campen 1997, p.266)

Jörg states that pieces after European models are less common in famille verte porcelain than in underglaze blue. The reason is not clear. Apart from an occasional, individually ordered object, porcelain made after European models became extremely fashionable after c.1700 and it might be thought that the new enamelled ware would be more in demand than the old-fashioned blue and white, even if it was more expensive because of its more complicated production. Perhaps the relative paucity of pieces after European models was due to the connections which the Chinese merchants or their guilds had with particular kiln complexes and the division of work and orders between those kilns. Be this as it may , relatively few famille verte pieces are known with European shape, while Western designs in famille verte are particularly rare. Items of table ware include salt cellars, candlesticks, pudding moulds, ewers and coolers. Tankards of this type are rare and were probably produced for only a very brief period, as all known examples have a similar decoration. In 1814 J.T. Royer's (an 18th-century amateur Sinologist and collector of Chinese objects) widow bequested many objects of his collection to King William I Royal Cabinet of Curiosities in 1814. In 1883 the objects were transferred to the Rijksmuseum, among these objects were a pair of identically shaped Chinese famille verte decorated tankards. The Rijksmuseum Amsterdam also has a late 19th-century copy with the mark of the Samson & Cie factory in Paris (inv. no. RBK 15889) which shows how well such pieces were imitated and how important the Royer pedigree is for identification purposes. (Jörg & Van Campen 1997, pp.266-267, 309b)

For an identically shaped and decorated tankards with original covers, please see:

Condition: A restored chip to the rim and a restored top of the handle. 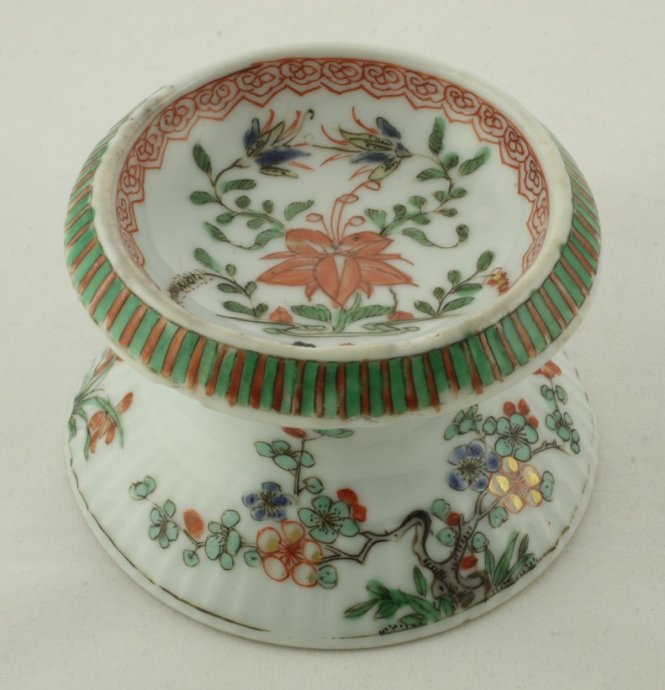 Salt of circular waisted form with ribbed moulding on the body, on an open base. The lower part tapering to the waist, the spreading top with a recessed centre, the rim extending downwards. Decorated in various overglaze famille verte enamels, iron-red and gold. Around the rim a lappet border in red and green, imitating the "pie-crust" pattern. The body with flower sprays and the scalloped dish with a lily plant in rouge-de-fer. Around the inside rim a ruyi border.

Modelled after a European pewter or earthenware salt, the material and the Chinese style decoration made this salt an exotic object that was prominently placed on a richly laid table. At this time salts were ordered separately, and only much later as part of a dinner service. With many Christian connotations, salt was an important seasoning at dinner before the 19th century and salts were larger and more elaborate than they are today. (Howard 1994, p.1254), (Jörg 2011/2, p.148)

Condition: Three glaze chips and a popped bubble of glaze to the upper rim and five glaze chips to the lower rim. 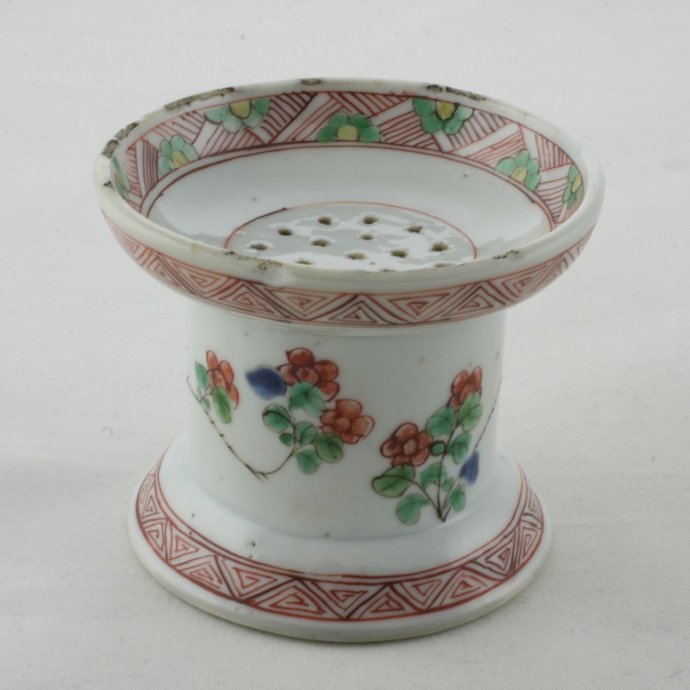 In the west, quill pens were used for writing and the ink was dried by dusting it with fine sand. This sander will have been based on a European metal / pewter or earthenware model, it belonged to the writing materials, beside the inkwell and had the same function as the blotting-paper. The sander had to be filled from the above. (Hartog 1990, p.149)

Condition: A chip and three glaze chips to the rim. 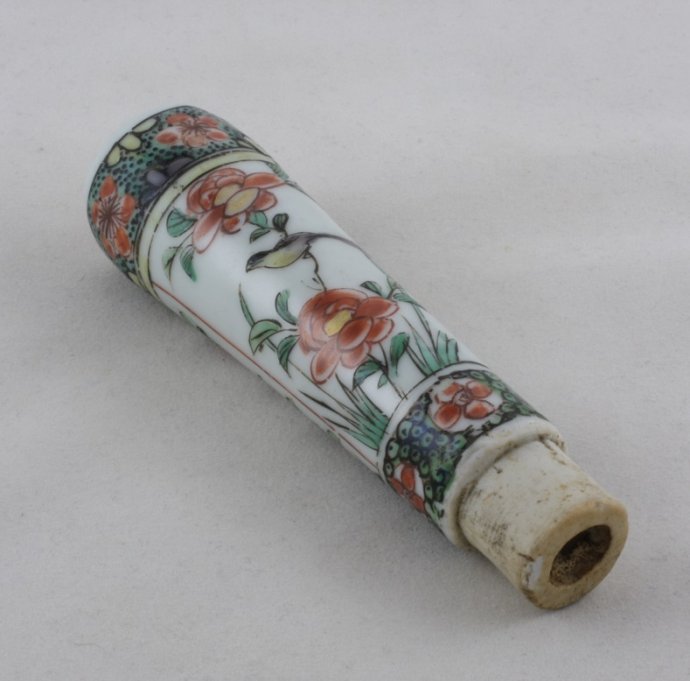 Tapering, cylindrical knife handle, a small hole in the top. Decorated in famille verte enamels, with a bird on a flowering plant in each of the two panels. On the top and base a band with a green-speckled ground with flower-heads where the blade fits into the handle. To the side an old rectangular paper label that reads '1305'.

Made after a European model, this handle will have been one of a larger set. Most are decorated in enamels; underglaze blue variants are more rare. The Dutch East India Company (VOC) shipped small quantaties of knife handles as part of its porcelain assortment only in 1730, 1736 and 1737. (Jörg 2011/2, p.153)