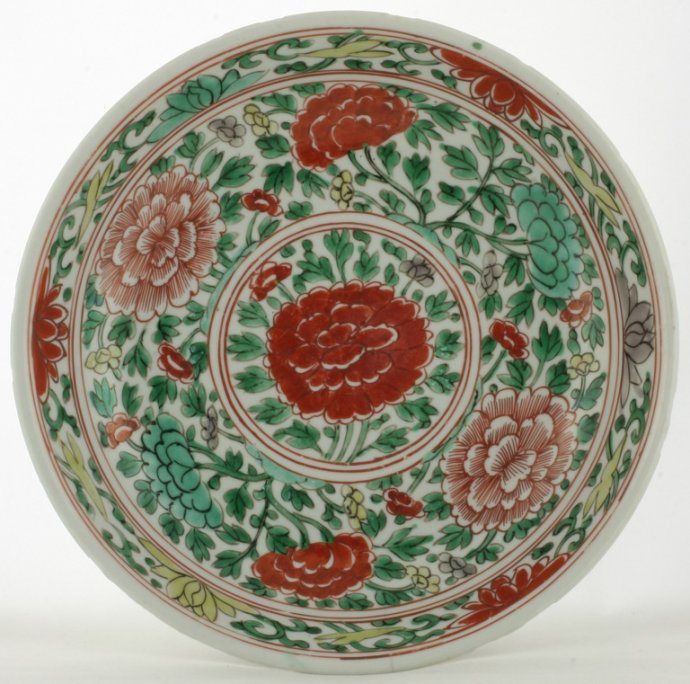 Dish on footring with gently curving sides and a slightly everted rim. Decorated in famille verte enamels, including green, yellow, grey and iron-red with a roundel filled with a peony and scrolls of leaves within a dense pattern showing four groups of peonies growing from rocks. The sides with spiralling flower sprays, the flowers alternately bending up or down. On the exterior rim is encircled by two concentric bands, The reverse with auspicious symbols: a pearl (beauty) with tassels, a conch shell (royalty) with tassels, a pair of books (spiritual wealth) with tassels, a pearl (beauty) with tassels, a musical stone (blessing) with tassels and a solid lozenge (good luck) with tassels. The footring is encircled by a single, concentric band. Marked on the base with the symbol mark: 'Sacred Fungus' the symbol of longevity, immortality, in a double circle in underglaze blue.

Dishes of this kind represent a rather harsh variant of the famille verte colour scheme, with simple designs, mostly of flowers, without much refinement but with an impression of strength and boldness. They appear to have been produced specially for export to the South-East Asian markets in the second half of the 17th century, but as they have not yet been studied in detail, it is not clear how they developed and if they were made at Jingdezhen or in Southern Chinese kilns as a replacement for Zhangzhou (Swatow) ware. (Jörg & Van Campen 1997, p.153)

Condition: Various frits and chips to the rim and seven hairlines to the rim. 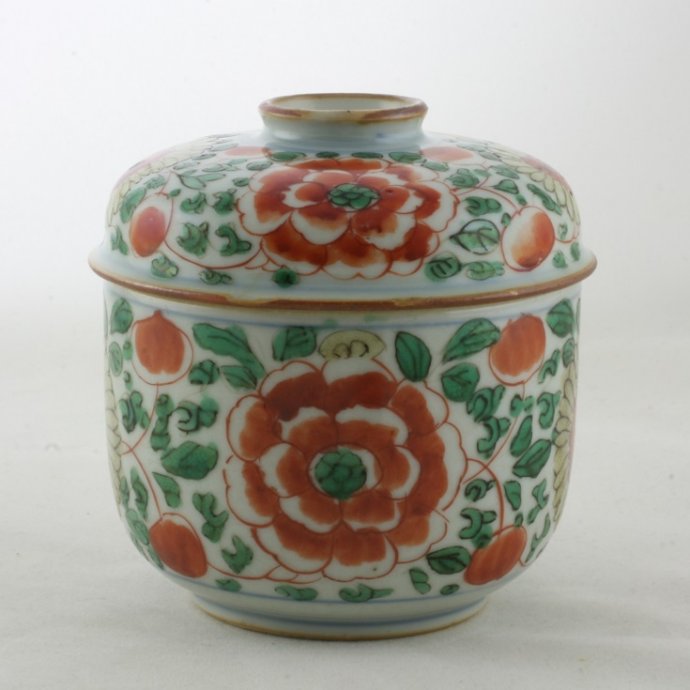 Covered jar on footring with an almost cylindrical body. The domed cover with a ring knob, the cover and ring with an underglaze brown-edged rim (jia mangkou). Decorated in famille verte type enamels with a continuous decoration of leafy scrolls and large peony flower heads. The cover is decorated en suite.

The shape, called a 'candy pot' in the West, is known from Kangxi examples, and was made throughout the 18th century until deep into the 19th century. It was a practical object, used to store food and other things and was widely distributed. Objects like these should be counted among the wares made for the south-east Asian markets, and not for Europe where a more refined and segmented decoration was appreciated. Brightly enamelled variations were specially made for the Malaysian market until the early 20th century. (Jörg 2011/2, p.33)

Non-figural designs were suitable for Muslim clients in the Middle East and Southeast Asia, where the red-and-green palette was popular. But merchants who made up cargoes for export, also included such items for shipment to Europe. (Kerr 2015, p.158) 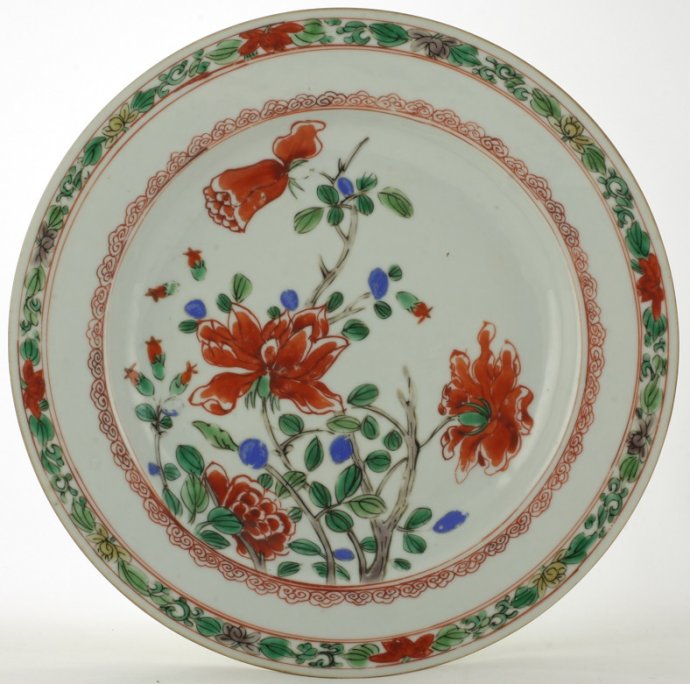 Dish on footring with curved sides and an underglaze brown-edged rim (jia mangkou). Decorated in various famille verte enamels with a flowering peony plant. On the sides a ruyi border and around the rim floral scolls separated by lotus flower heads border. The reverse is undecorated. (Sargent 2012, p.183)

For a pair of identically decorated dishes, please see: