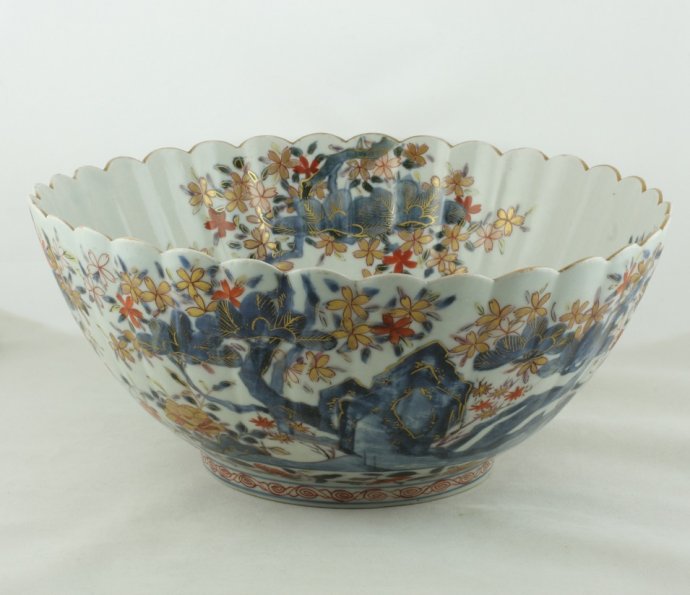 A large lobbed bowl of deep chrysanthemum form on footring with fluted sides and a scalloped rim. Imari, decorated in underglaze blue, iron red, various overglaze enamels and gold with a central design of the chrysanthemum crest (kiku no mon) on the sides two large branches of pine with exotic flowers, the outside with branches of pine, bamboo and exotic flowers issuing from rockwork. Round the footring a spiral (clouds) pattern border. Marked on the base with a flowering prunus spray.

The Three Friend (shõ-chiku-bai) design originated in China. It is the combination of pine, bamboo and prunus, symbolically representing Confucius, Buddha and Lao Tse. Once the 'three friends' were standing around a jar containing vinegar. Each of them tasted the liquid. Lao Tse, the gentle, called it sweet, Buddha, the meditator, called it bitter and Confucius called it sour. But they eventually agreed that it was all the same liquid. This legend represents the idea that the three 'religions' originated from the same source. The 'friendship' of the three trees is further suggested by the property they have in common of strength during hard times. The bamboo bends with the wind but never breaks, the prunus flowers even when there is still snow and the pine is an evergreen. Together they symbolically represent long life and happiness. (Arts 1983, p.140)

During the Tokugawa (or Edo) Period 1603-1868 the use of the sixteen petalled chrysanthemum was, in Japan, kept exclusively for the Emperor and not to be used by the public in general. (Gorham 1971. p. 187)

Imari porcelain, like classic polychrome Kakiemon, emerged from early enamelled ware and is a typical export product with many different Western shapes and a huge variety of motifs and patterns, sometimes copied from Western models. The general appearance of Imari is less light and refined than Kakiemon, but their compact compositions and dense patterns appealed to the Dutch and other Europeans in the Baroque period. (Impey, Jörg & Mason 2009, pp.52-53) 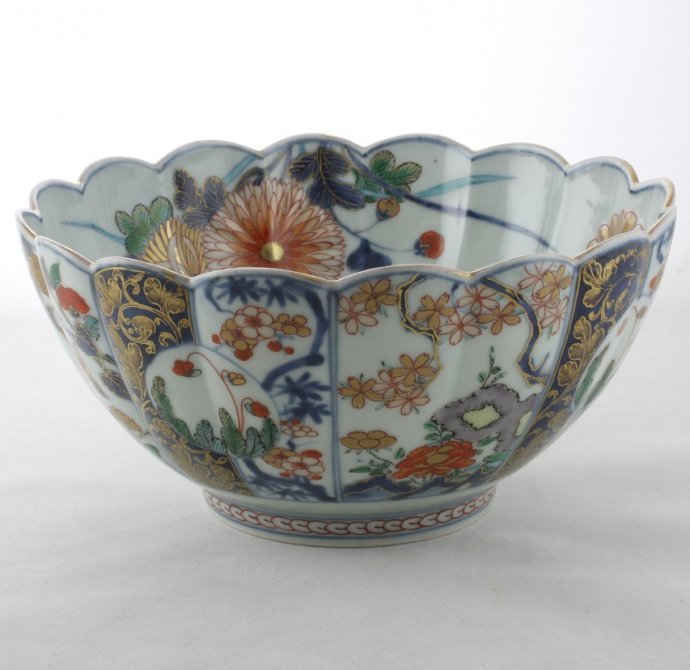 Lobbed bowl on footring, scalloped rim. Imari, decorated in underglaze blue, iron red, green, turquoise, aubergine, yellow and gold. The central lobbed panel with a prunus spray. The sides with flowering chrysanthemums, single kiku-flowers and branches of lespedeza flowers. One chrysanthemum and the kiku-fllowers are moulded in low relief. The outside is divided into four panels with double cherry blossoms and four two-sided panels, one side with foliate scrolls in gold on a dark blue ground, the other  with a blossoming prunus tree. The two sides connected by a roundel showing a violet with long leaves. (Jörg 2003/1, p.100)

This bowl can be considered a good example of elaborate Imari with raised motifs. The scalloped rim of this bowl is meant to resemble a kiku-flower, a shape mirrored in the decoration. A similar bowl is in the Shibata Collection. (Jörg 2003/1, p.112)

For an identically shaped and decorated bowl, please see: 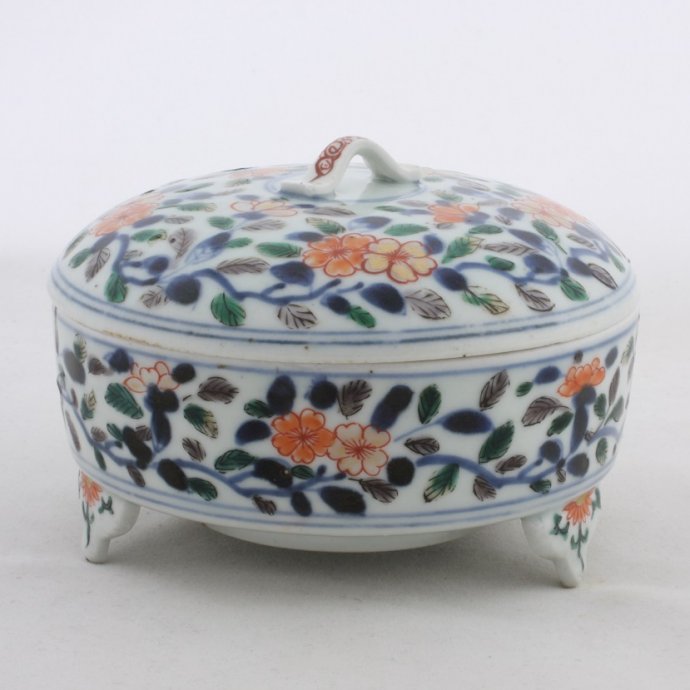 Exhibited: The Asian Galleries Reinmagined - Color Across Asia held from 21 December 2016 to 13 May 2018 at the Ackland Art Museum, The University of North Carolina at Chaphil Hill, The United States of America, Object Guide no. 74.

Covered box on three triangular low, ruyi-shaped feet extending below a broad firing-ring on the base. Straight sides, domed cover with strap handle. Imari, decorated with in underglaze blue, iron-red, yellow, green, grey and gold. The sides and cover decorated with foliate scrolls and cherry flowers. On the inside of the cover a sprig of plum. The three low feet each with a half chrysanthemum flower head and scrolls. The strap handle with a floret between scrolls.

The shape, most likely, derived from an European (silver) model and it was used as a small tureen. Jörg describes a bowl with cover on three low feet with a matching saucer this may indicate that originally the covered box also might have had an matching saucer. (Jörg 2003/1, p.110, cat. 113)

According to the previous owner the covered box was once part of the estate of one of the Groninger borgen, these estate houses were the magnificent country seats of local nobility. They usually originated as stone houses; a simple defence work from the 14th or 15th century with thick walls where farmers could flee in times of danger. (Adelijke Trots in de Ommelanden, (E. Broekhuis ed., Groninger Borgen Stichting, Groningen, 2002)), (www.borgen.nl) 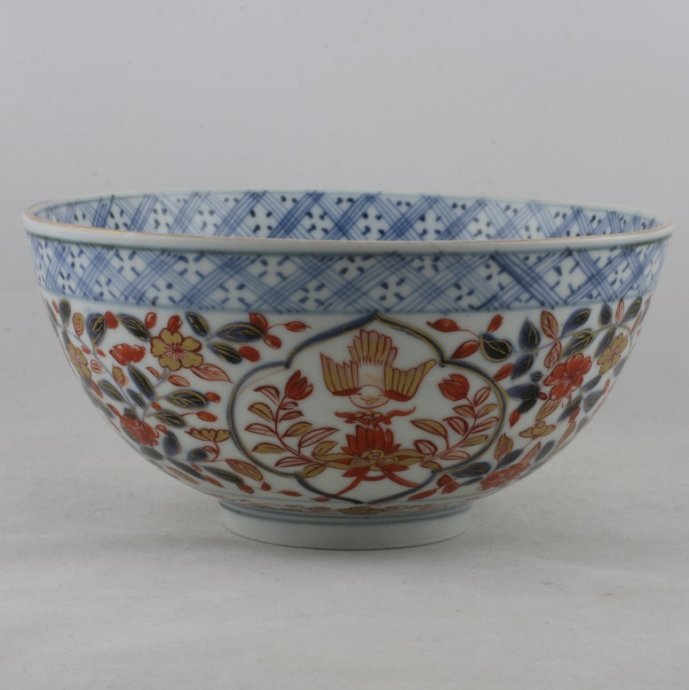 Bowl on footring, straight rim. Imari, decorated in underglaze blue, iron-red and gold with three panels, filled with a bird in flight above two knotted branches with a flower head alternating with leafy and flowering branches. Round the foot a floret between scrolls pattern border. On the outer and inner rim a diaper pattern border. On the inner wall three flowering branches - one of iris, one of cherry and one of prunus. On the bottom a peony flower spray in a single concentric band in underglaze blue and gold.

Condition: Two firing flaws to the base. 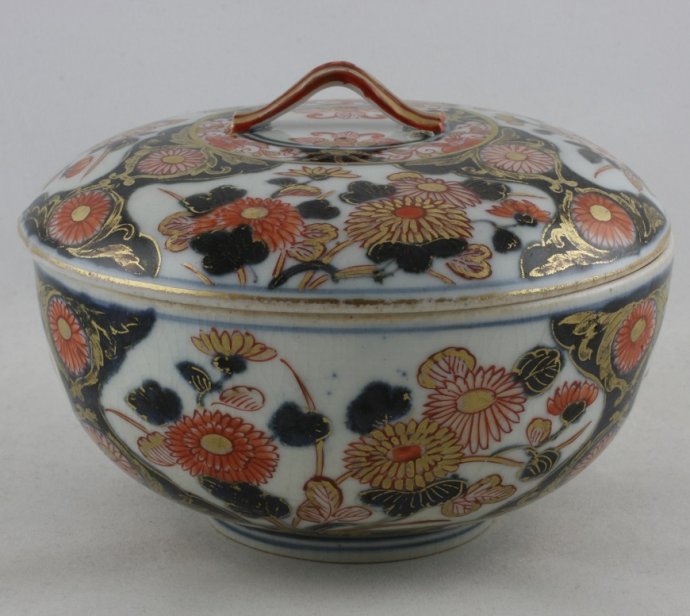 Until around 1650, all porcelain imported to Europe comprised blue-and-whitewares. Inspired by Chinese porcelain, Japanese potters experimented with coloured enamels. The Dutch East India Company, (Vereenigde Oost-Indische Compagnie, VOC) focused on these new colourful wares as trade articles from the moment they were made. The decorations on this porcelain are frequently derived from Chinese examples. Imari decorations were among those that developed during this experimental phase.

Imari porcelain is named after the port Imari, from where porcelain was shipped to the Dutch Factory on Deshima Island in Nagasaki. Imari objects are usually decorated with exuberant and lively depictions. Besides underglaze blue, the other two dominant colours are iron-red and gold.

In 1680, Private traders replaced the Dutch East India Company, (Vereenigde Oost-Indische Compagnie, VOC) as the main trading partner in Japan. They focused on porcelain made in European shapes. The high point of this production occurred around 1700. Besides tableware, garnitures and ornamental dishes were produced, As with Chinese porcelain, enamelled objects and porcelain were very popular.

The shape, most likely, derived from a European (silver) model, it was used as a small tureen. Jörg describes a bowl with cover on three low feet with a matching saucer this may indicate that originally the covered box also might have had a matching saucer. (Jörg 2003/1, p.110, cat. 113)

Condition: Firing flaws to the cover and base and fine crazing to the glaze all caused during the firing process. 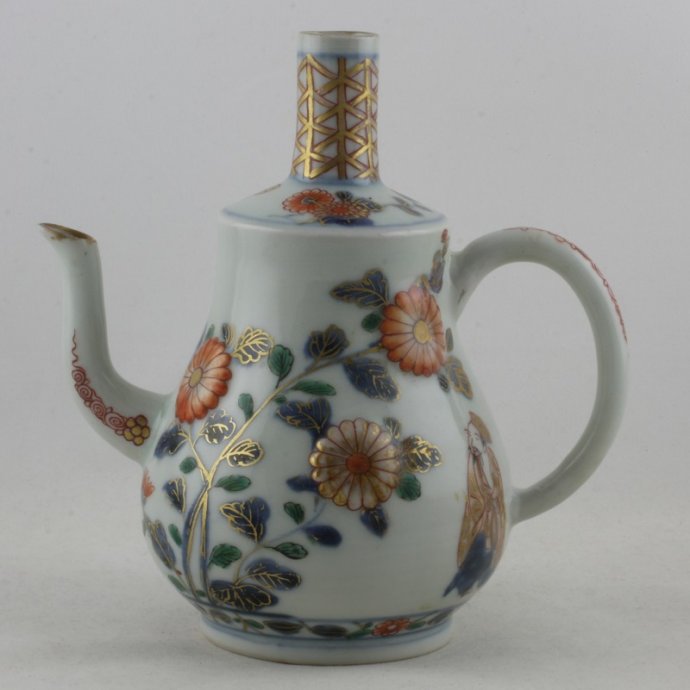 Oviform ewer on footring, narrowing shoulder with cylindrical neck. Curved spout and C-shaped handle. Imari decorated in underglaze blue, iron-red and gold with flowering plants its flowers are moulded in low relief alternating with a seated figure. On the handle and spout a floret between scrolls. Round the foot a continuous flower scroll.

This special type of ewer was probably used for soy, its moulded decoration in low relief was popular for a while,and is also seen on several other export shapes.

For other objects with moulded decoration in low relief, please see: 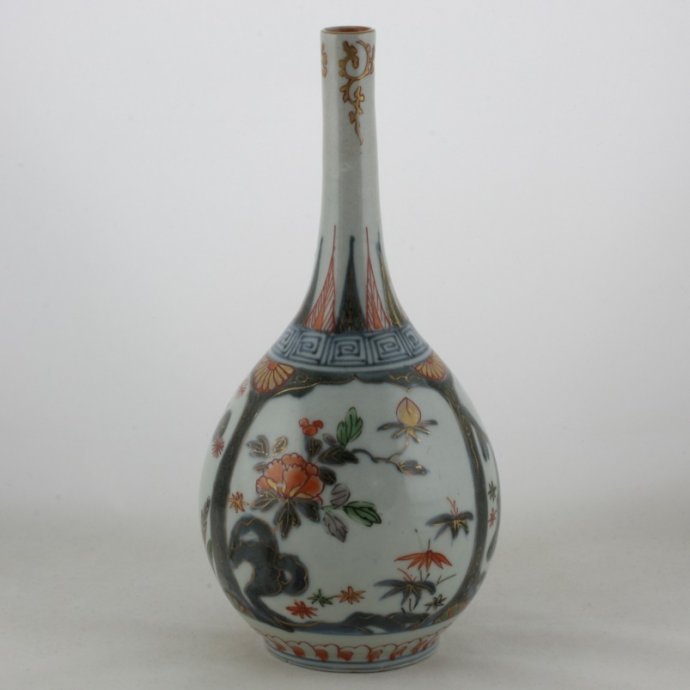 Pear-shaped bottle on footring, rounded body, tall narrow neck. Imari, decorated in underglaze blue, and overglaze green, aubergine and black enamel, iron-red and gold with around the foot a band of lappets. The body is divided into three panels by underglaze blue bands ornamented with gold scrolling and half chrysanthemums. The panels contain prunus, pine, peony and bamboo, their trunks growing from pierced rockwork. A meander pattern border between underglaze blue lines around the base of the neck. Round the neck an ascending leaf pattern border and round the rim three descending floral scrolls.

The layout of floral or other decoration in strongly marked cartouches is remotely reminiscent of the kraak. Sets of identical bottles or vases were probably an alternative to the expensive garnitures that were placed on top of porcelain cabinets in the Dutch interior. (Impey 2002, p.185 cat. 291), (Jörg 2003/1, p.99) 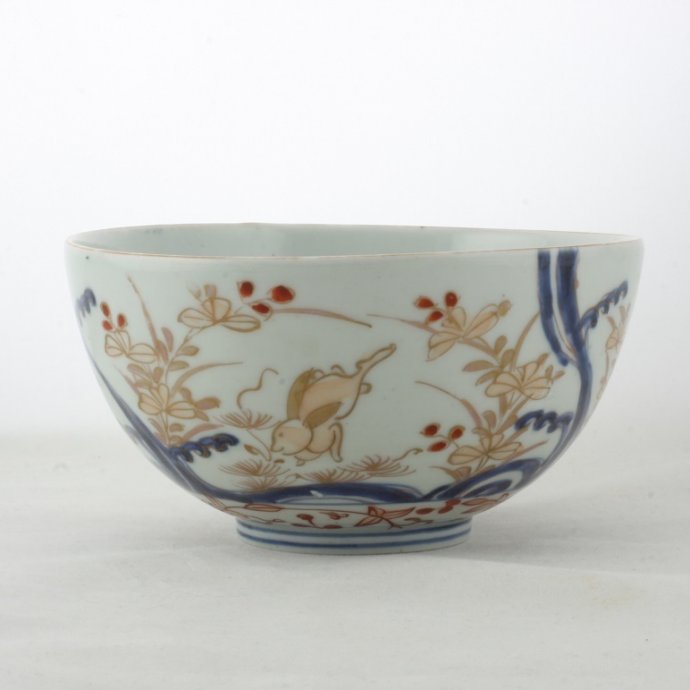 Bowl on footring, spreading straight rim. Imari, decorated in underglaze blue, iron-red and gold with flowering plants and a white hare running from foaming waves. Round the foot a band of floral sprays. On the bottom a single flower spray in a double concertric band.

This particular hare pattern is known on bowls, teacups and saucers and a rare milk jug, indicating that tea sets with matching parts were made for export.

The hare (usagi) is associated with the moon and old age. Legends says that the female conceives by running on the waves – represented by the curved underglaze blue lines - on the 18th day of the 8th month when the sky is clear and the moon is reflected in the water. The female can also conceive by licking the fur of the male during the same period or simply by gazing at the moon.

Yet another account says that the crocodiles ran after him and snapped his white fur to take revenge because he had laughed at them for their stupidity. After the hare repented and promised never to use deceit again, the fairy Okuni-nushi-no-Mikoto helped him regrow his fur.

For an identically shaped and decorated bowl, please see: