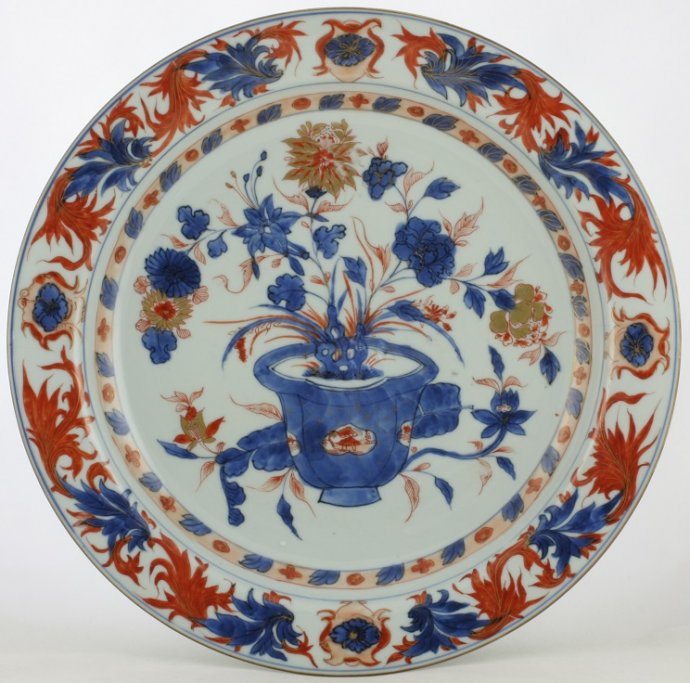 Large dish on footring with a flat underglaze brown-edged rim (jia mangkou). Chinese Imari, decorated in underglaze blue, overglaze iron-red and gold with a jardinière filled with miniature pierced rockwork and various flowering plants. The jardinière is flanked by flowering lotus, behind it a large leaf. On the sides a narrow border of alternating, stylized flowers, fruits and leaves on a pink-gold wash ground. On the rim acanthus leaves alternating with four peaches with an incised rosette. On the reverse two flowering peony sprays.

This dish represents an example of Chinese Imari with decoration on the rim that is apparently influenced by knowledge of European ornamentation. The ruffled leaves that constitute a distinctive feature of this decoration are not common on Chinese porcelain and were evidently influenced by an European example. (Suchomel 2015, p.365)

Interestingly, an identical rim decoration can be found on an armorial dish with the English coat of arms of Dr. William Walker of Hertfordshire. He was educated at Wakefield Grammar School and Trinity College Cambridge. He went to Paris in 1719 and travelled in Europe. He held many important posts including being Arch-deacon of Hereford, Chancellor of St.Davids and Dean and Rector of Bocking in Essex from 1725 to 1741. Here the peach with rosette is replaced by a cartouche with a rising sun, his crest, heraldically described as the sun rising in clouds all proper. Curiously this crest of Dr. Walker can also be found on armorial plates also closely copying this border design, dating around 1715, bearing the arms of Lord Somers, lord chancellor of England. Walker probably knew Somers socially and when Somers saw Walkers’ new service and wanted to keep up with his stylish friend, he copied the design. However, the esoteric detail of whose crest was whose was lost somewhere in translation. Around the same time the Walker crest was also found by sir Robert Walpole, later prime minister of England on his Imari armorial service when it arrived in England.  (Howard 1974, p.177, pl.B2), (Fuchs & Howard 2005, p.42, cat. 7), (Litzenburg 2003, p 85, cat. 70)

This Walker service is dated c.1712, so therefore this dish can also be dated quite precise. 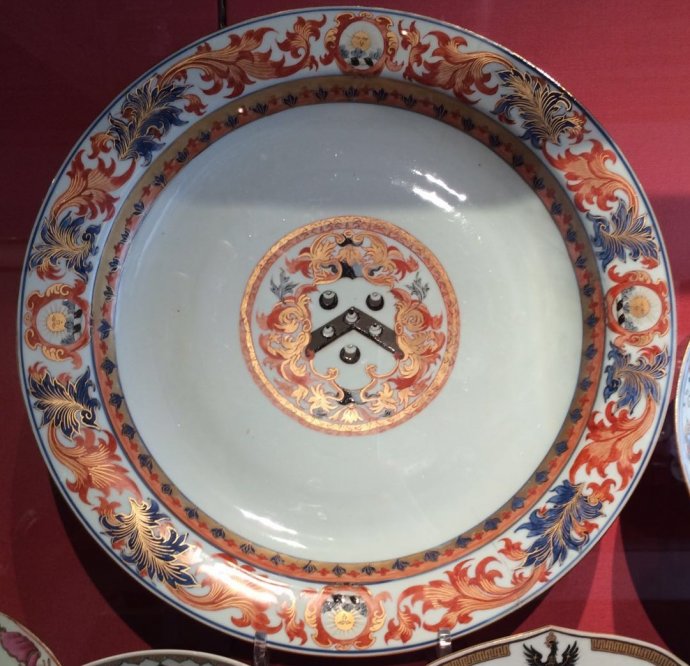 Dish with the arms of Walker, c.1712, diameter 388 mm (15.28 inch), collection Keramiekmuseum Princessehof, Leeuwarden, the Netherlands, inventory nr. NO 02447. (this dish is not included in this sale/offer)

Condition: Some firing flaws and wear to the decoration, a hairline to the rim. 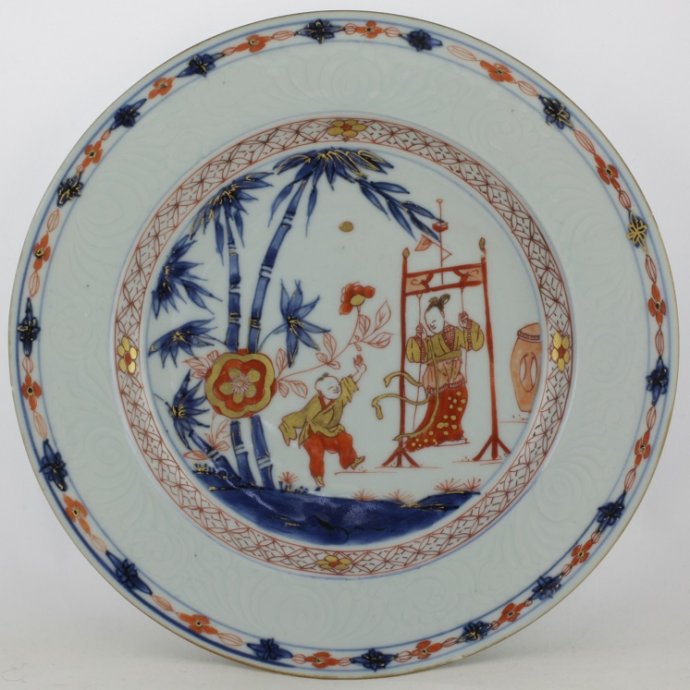 Dish on footring with a flat, underglaze brown-edged, rim (jia mangkou). Chinese Imari, decorated in underglaze blue, overglaze iron-red, black and gold. In the centre a Chinese garden scene with a flowering peony plant and a large bamboo tree with a Lady on a swing looking down at a little dancing boy. On the sides a trellis pattern border with four flower heads. On the rim large incised lotus flower buds with a small border with floral elements. The reverse with two bamboo sprays. On the base an old circular paper collectors label.

Chinese Imari or 'Chinese Japanese' as it is referred to in the Dutch East India Company, (Vereenigde Oost-Indische Compagnie, VOC) archives, was actually the Chinese answer to the popular Japanese Imari (after the port in Japan from which they were shipped), with its underglaze blue, iron-red and gold, that was produced in Arita for export from c.1680. (Jörg 2002/2, p.119)

This unusual dish is an interesting piece. On it the Chinese porcelain painter combined the underglaze blue and incised decoration technique with a very rare and unusual design of a Lady on a swing in 'Red & Gold' / 'Rouge-de-fer' with iron-red, black enamel and gold on the glaze.

Condition: Some wear to the decoration. A firing flaw and two frits to the rim one with a connected hairline.

Dish on footring, flat underglaze brown-edged rim (jia mangkou).  Chinese Imari, decorated in underglaze blue, iron-red, black and gold with two deer, one white the other brown with spots, near a flowering tree with a peony plant and a fence with taihu (garden) rocks and flowering plants. On the sides and rim a broad underglaze blue band with trelliswork and flowers in gold, on four places debouching into three large flowering bushes, alternating with four clusters with antiquities. On the reverse two leafy sprays.

Interestingly, the decoration of this dish is almost identical to the plates with the well-known ‘Governor Duff and his Wife’ design. Here the couple and accompanying dog have been replaced with the two deer. This version with the two deer seems to be unrecorded in literature so far. 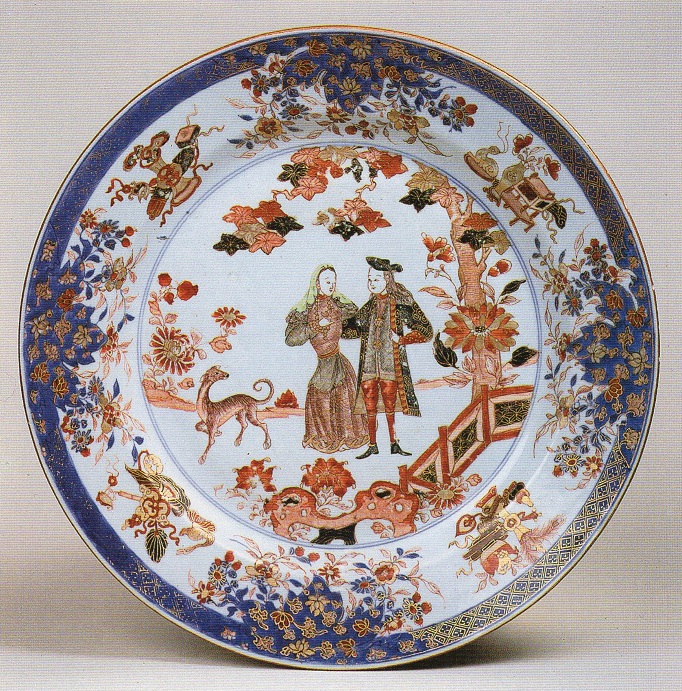 Since Williamson (1927) this couple was named as such, referring to the Dutch Governor-General Diederik Durven (governor-general 1729-1931) and his wife Anna Catharina de Roo. Speculation has also led to the figures being misidentified as King Louis XIV of France and la marquise de Montespan or Madame de Maintenon.

As Howard and Ayers rightly point out, there is no proof of this identification and it is much more likely that the design was based on a print or drawing, depicting a ‘happy Frisian couple’ of Dutch tradition in a general way. They also state that both D.F. Lunsingh Scheurleer and M. Beurdeley are also in agreement that the subject is Dutch rather than French (Jörg 1989/2, p.76), (Howard & Ayers 1978, vol. I, pp. 145-146 & plate 127)

Sargent suggests a depiction of a “Sailor’s Farewell”, a theme which was used extensively on Western art of all media, and consequently it was fairly commonly depicted on export decorative arts including porcelain, reverse paintings on glass and lacquer. (Sargent 2012, pp.193-195)

As it turns out, Howard & Ayers were right on the mark with their suggestion of a ‘happy Frisian couple’. In his Emden catalogue (2015), after he had made a closer study of the couple’s attire, Suebsman points out that both the man and woman are wearing clothing of the sort worn up to the mid-19th century at weddings in the Frisian community of Hindeloopen. Now but a small village, in the Dutch Golden Age Hindeloopen was a flourishing port town in which a considerable amount of trade was conducted. 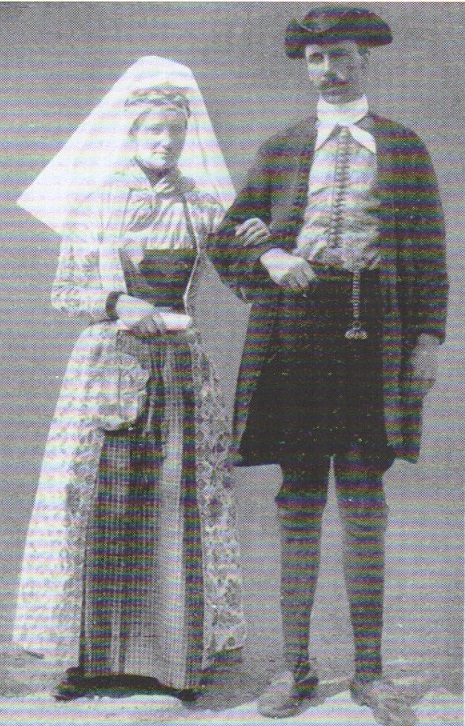 The bridegroom has a tricorn (driesteek) on his head and is wearing a long coat with several knots, breeches and low shoes, whilst the bride sports a white net veil (witmoer). Her coat (wentke) was made not from local material but invariably from choice Indian chintz, usually embellished with exotic patterns in a brownish red. She carried her bag to the right to indicate that she was now spoken for. The dog on the plate is probably to be interpreted as a symbolical reference to the couple’s fidelity to one another.

Couples and families in similar costume also exist in the form of blanc de Chine and polychrome figures from the late 17th and 18th centuries. A drawing of one such couple is documented on a coromandel lacquer chest-of-drawers illustrated in Hervouët & Bruneau. (Emden 2015/1, p. 97 cat. 72)

For objects with identically decorated rim and a Dutch couple with dog, please see:

The deer design symbolises best wishes for a career as an official and good fortune and prosperity. This is because the Chinese word for deer, lu, has the same sound as the word for the high salary of a Chinese official. Another reason for the association with Chinese scholar-bureaucrats or literati is that one of the concluding rituals of the provincial examinations that had to be passed if one was to become an official in the Chinese civil service was a party known as the Banquet of Auspicious Omens, ore more literally the Deer-cry Banquet.

More frequently however, in Daoist mythology especially the spotted deer are considered auspicious animals connected to immortality. This is because they were believed to attain great age. Furthermore, they were the only animals able to locate and eat the special fungus of longevity, lingzhi. These special mushrooms were found on the paradise islands of Penglai. In Chinese mythology, the Penglai mountain is often called the base of the Eight Immortals, or at least where they travelled to have a banquet. In Chinese art, the spotted deer usually accompanies Shoulao or Magu, the God and Goddess of Longevity. Because of all this, even today the horns of deer have an important place in Chinese medicine and can be found in every Chinese apothecary shop. The soft internal part of the horns is dried, pulverised, and made up into pills. The inferior parts are boiled up into jelly or tincture.

According to Bjaaland Welch, in Chinese legends the different colours of the deer signified the age: a 1000-year-old deer was depicted with grey fur, a white one for an impressive age of 5000 years.

Condition: Some wear to the central decoration, firing flaws to the reverse rim and fleabites, frits and two chips to the rim. 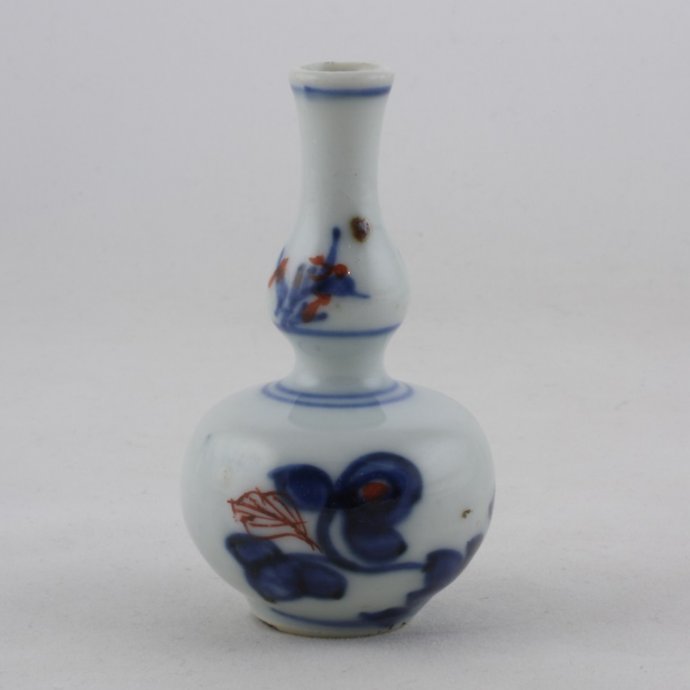 Condition: A firing flaw to the neck and heavy wear to the gold decoration.