Ceramics with a monochrome glaze have a long tradition in China, the earliest being that applied by potters of the Shang dynasty (c.14th-11th century B.C.). Monochromes continued to be made throughout the Ming dynasty. The great era of monochromes begins at the end of the 17th century when the Jingdezhen kilns had been reorganised and the links with the court re-established. The emperors Kangxi, Yongzheng and Qianlong were all interested in craftsmanship and technical virtuosity and as a result the search for new shapes and glazes was promoted. The great variety in monochrome glazes that became available in the 18th century can be divided into two groups: the monochromes fired at a high temperature and those fired at a lower temperature in a muffle kiln. The first group is the largest and includes, the cobalt blues ranging from a very dark, even blue and the powder blue variety to the light blue clair de lune glaze. Colours based on copper pigments include sang de boeuf or 'ox blood', 'peach bloom' and other varieties of copper red. Then there are the various browns, ranging from the dark 'Batavia brown', which was very popular in the 18th century, to a light brown. The green celadon glaze also belongs to this category, as do the simple white monochromes and the rarer 'tea dust', 'iron rust' and lustrous 'mirror black' glazes. The low-temperature wares include various shades of green, the imperial and other yellows and the relatively scarce coral red. On monochromes the Chinese could not abandon their love of decoration, so a rather formal pattern of dragons, flowers or scrolls is often incised under the glaze or painted in overglaze gold, reflecting the taste of the court. Monochromes were primarily intended for the Chinese market, but some inevitably reached the West in the 18th century as private merchandise. The greatly appealed to the prevailing rococo taste and were eagerly collected. Monochromes continued to be made in the 19th century and a wide range of good pieces is known. (Jörg & Van Campen 1997, pp.229-230)

Strictly speaking, the white, undecorated blanc de Chine porcelains made in Dehua also belong to the monochromes, but as is customary they have been treated as a separate category (see Chinese Porcelain - Blanc de Chine 1600-1900), as have the powder blue pieces (see Chinese porcelain - Powder Blue 1700-1725) 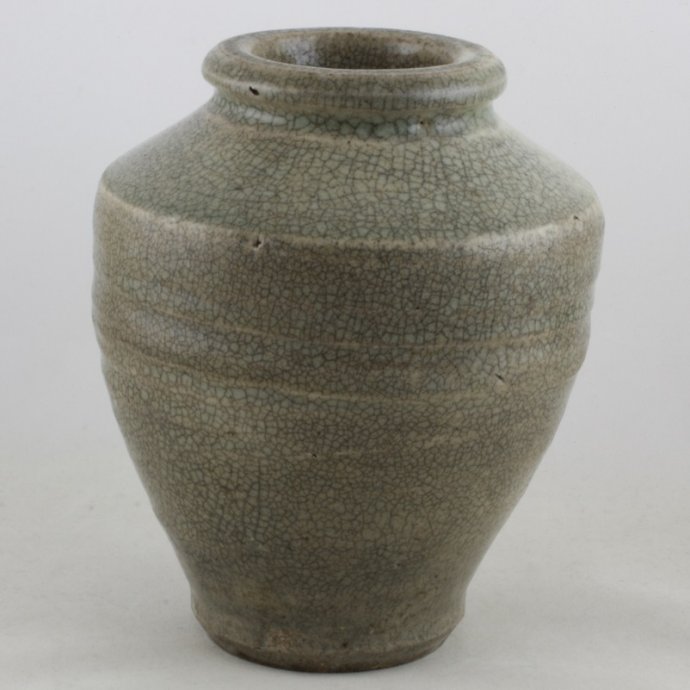 Conical storage jar on footring, a marked shoulder ending in a wide mouth with a low rim. Covered with a greyish / greenish glaze, undecorated. The concave base is unglazed

These types of heavily potted, sturdy storage jars were widely mass-produced in south Chinese kilns for export. The impurities of the glaze and the horizontal ribbons on the body, the result of throwing the pots on the wheel, which were not removed in a finishing stage, show the quickness and the efficiency with which these pieces were made. These type of storage jars represent a well-known type, apparently made during long stretches of time during which there is no discernible development in potting, shape and glaze. They were widely used in Southeast Asia as containers for salt and all kinds of food and liquid. Round the rim a piece of parchment, oiled paper or textile could be bound, sealing the contents. Their shape designed to store them economically in the shipholds, lying with the mouth alternatingly up or down. These storage jars were multi-purpose pieces, to be used again and again, filled with new commodities, sold and shipped to new destinations. (Jörg & Flecker 2001, pp.90-91)

Similarly shaped storage jars salvaged from the cargo of the The Vung Tau Cargo, c.1690 shipwreck.

Condition: Overall fine crazing to the glaze with various firing flaws, a glaze imperfection to the body and a chip to the footring.