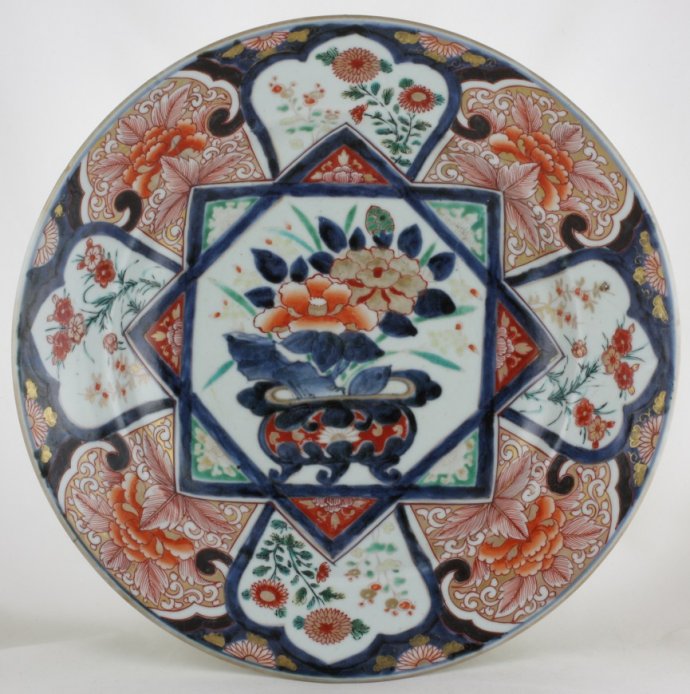 Dish on footring, flat rim. On the base five spur-marks. Imari, decorated in underglaze blue, iron-red and gold with wo superimposed shikishi filled with a flowerpot with flowering peony plants. On the sides and rim shaped panels filled with various flowering plants alternating with a flower head with leaves and leafy scrolls. On the base a shop or painters mark in underglaze blue. The reverse is undecorated. 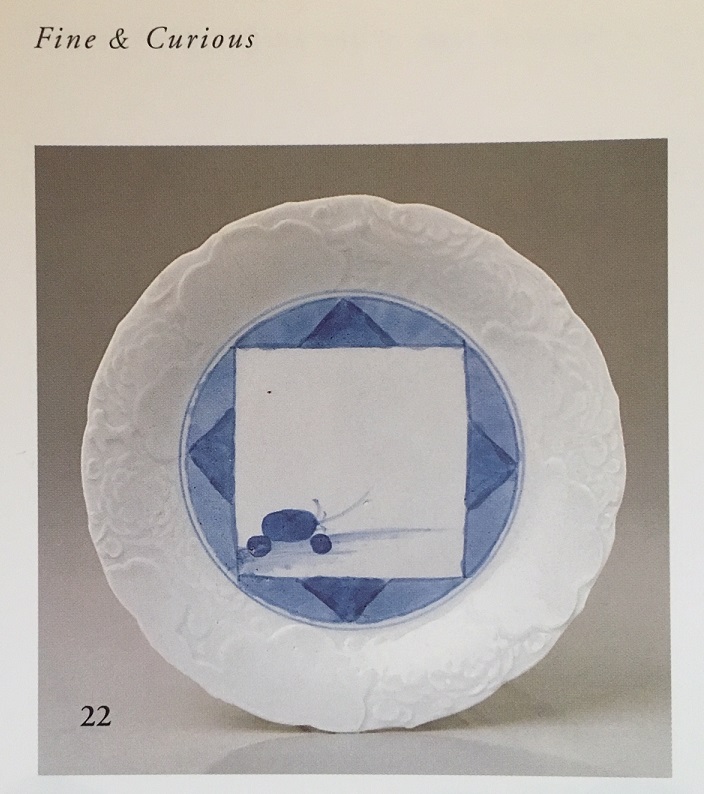 In his Fine & Curious on page 40, cat. 22 Jörg shows an example of this shikishi design pattern.

Reproduced from: Fine & Curious. Japanese Export Porcelain in Dutch Collections, (C.J.A. Jörg, Hotei Publishing, Amsterdam, 2003), p.40, cat. 22. This dish is not included in this sale/offer. (copyright in bibliographic data and images is held by the publisher or by their respective licensors: all rights reserved)

For examples of dishes decorated with this shikishi design pattern, please see:

Apparently the same shikishi design pattern was used on Delftware of c.1660-1680 proving that Japanese pieces with this design pattern were known in The Netherlands at that time. (Jörg 2002/2, p.38, cat. 21) 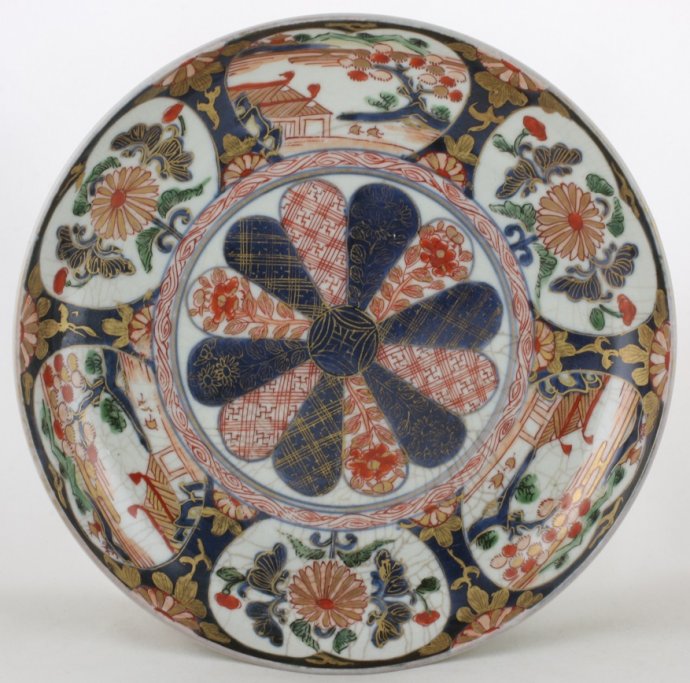 Although some types of chrysanthemum begin flowering in the summer, the chrysanthemum is primarily an indication of autumn. Like many autumn motifs the chrysanthemum evokes feelings of melancholy in Japan, as is beautifully expressed in a poem by the 9th-century Ki no Tomonori:

tsuyu nagara / to wear in my hair

kiku no hana / with dew still clinging to it

aisenu aki no / oh may this present

For a dish with a similarly large central chrysanthemum crest, (kiku no mon), formerly part of the Dresden collection formed by Friedrich August or August the Strong, Elector of Saxony and King of Poland please see: 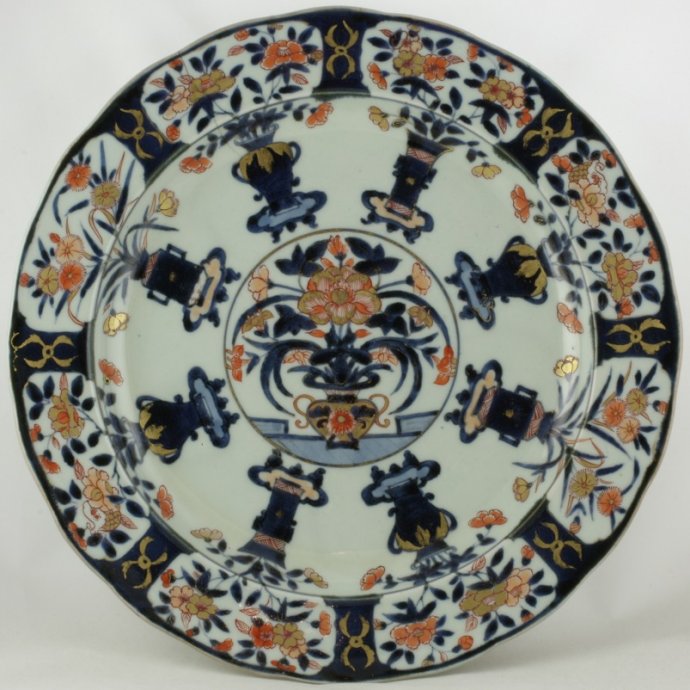 Dish on footring, flat rim with a scalloped edge. On the base five spur-marks in a X-pattern. Imari, decorated in underglaze blue, iron-red and gold. In the central medallion a flower vase with shaped handles filled with various flowers on a terrace. The sides with eight flower vases with shaped handles filled with various flowers on low jardinières. On the rim eight reserves filled flower sprays on an underglaze dark blue ground with foliate scrolls in gold. On the reverse three flowering branches - one of peony, one of chrysanthemum and one of prunus. Round the foot a lozenge-pattern border.

The scalloped edge on this dish is unusual for this period rarely seen on dishes of this size. 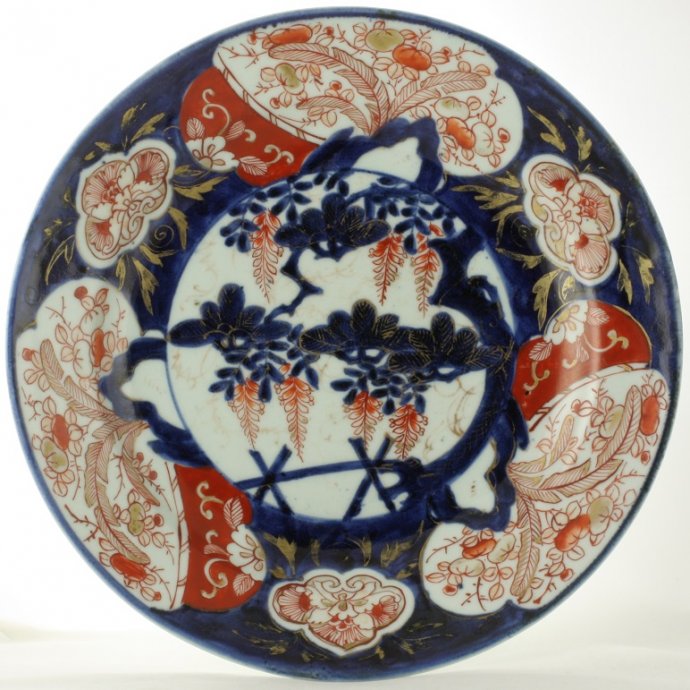 Dish on footring, flat rim. On the base three spur-marks. Imari, decorated in underglaze blue, iron-red and gold with a fence and a flowering wisteria tree. On the sides and rim on a blue ground with foliate scrolls in gold three wide and three narrow panels containing flowering peony and palm leaves alternating with flowering peonies. The reverse with three chrysanthemum sprays.

Condition: Some wear to the decoration. 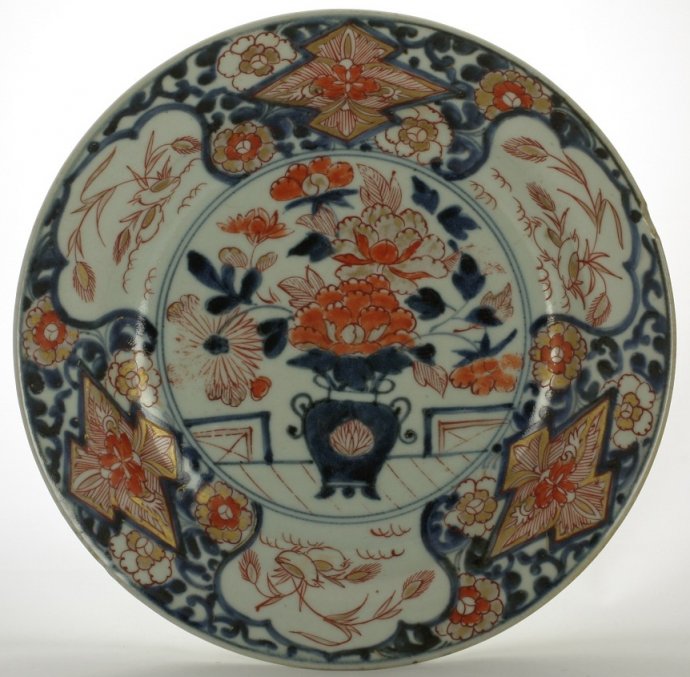 The quail, or a pair of quails, fairly often used as a motif on fine porcelain, is a symbol of courage because of its fighting qualities. (Jörg & Van Campen 1997, p.213)

Condition: A firing flaw to the rim. 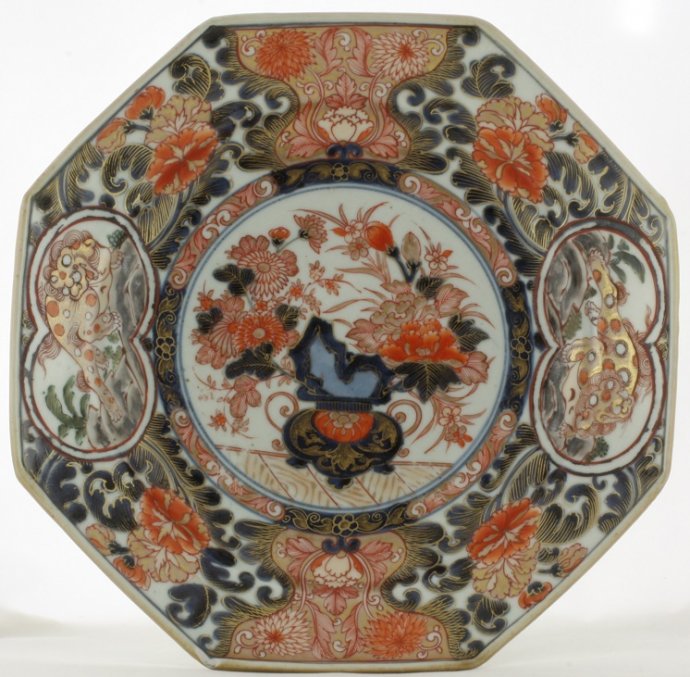 Octagonal dish on footring, flat rim with slightly upturned edge. Four spur-marks in a Y-pattern on the base. Imari, decorated in underglaze blue, iron-red, gold and black and green enamel with a jardiniere (hanakago-de) on a veranda filled with flowering peony and chrysanthemum plants surrounded by a narrow border with florets between scrolls alternating with leafy scrolls. The sides and rim with two shaped panels filled with a shishi and two panels with flowering chrysanthemum sprays in between the panels peony flower heads and leafy scrolls in underglaze blue ground and gold. On the reverse three chrysanthemum sprays. On the base a single, concentric band. To the base an old paper collectors label that reads: '40'.

The "Chinese lion" or kara shishi is supposed to be the Chinese conception of a creature never seen in China but told of by travellers or copied from the pictures from India as there are no records of lions in ancient Chinese writings before about 250 A.D. It is also called a Chinese Dog or Dog of Fo (Buddha) from which it is clear that dog-like characteristics prevail over the original leonine ones. The lion symbolizes guardianship and protection, from which belief is derived the practice of placing statues of lions at the doors of palaces and tombs as guardians of both the living and the dead against all evil.

The shishi is characterized by a fierce expression, large bulging eyes and curly mane, a bushy tail and curly locks of hair on the legs. Japanese pairs of figures of shishi usually have both animals with an ornamental / brocade ball, whereas Chinese examples usually have one with a ball, the other (female) with a cub. It is clear that the shishi is no ordinary lion, but a mythical beast. It is probable that the lion in this mythical form came over from the Middle East as a guardian figure in Chinese pre-historical times. After the introduction of Buddhism, the shishi retained its function as a guardian, and pairs of these animals were placed on either side of the entrance of temples in China and Japan.

For a large dish decorated in the same style, please see:

Condition: Wear to the black enamel and a chip to the rim. 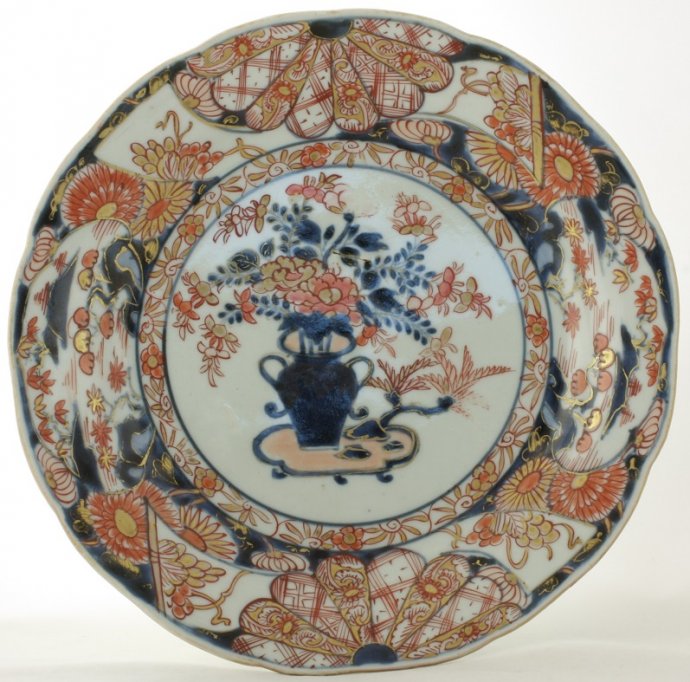 Dish on footring, spreading flat scalloped rim with a glazed base. On the base four spur-marks in a Y-pattern. Imari, decorated in underglaze blue, iron-red and gold with a low jardinière on which a miniature garden with rocks, a small palm tree and a vase filled with flowering peonies and wisterias surrounded by a narrow continuous flower scroll. On the sides and rim a blue ground with chrysanthemums in red and foliate scrolls in gold, two half kiku-flower motifs and four panels, two book-shaped, alternately filled with a riverscape and flowers with ribbons. The reverse with prunus, peony and chrysanthemum sprays.

The book-shaped panels on the sides and rim are unusual and together with the half kiku-flower motif most likely derived from (embroidered) Japanese textile designs. (Jörg 2003/1, pp.106-107 & p.111)

The spur-marks on the base are the remains of pointed supports that pierced the glaze. This was mostly done in Arita, Japan and rarely used in China. After the firing process these attached small supports were hammered of but on this specific dish, two of the original pointed supports are still intact and attached to the base. (Jörg 2011/1, p.248)

Condition: A firing flaw to the centre, some wear to the decoration and fine crazing to the glaze. 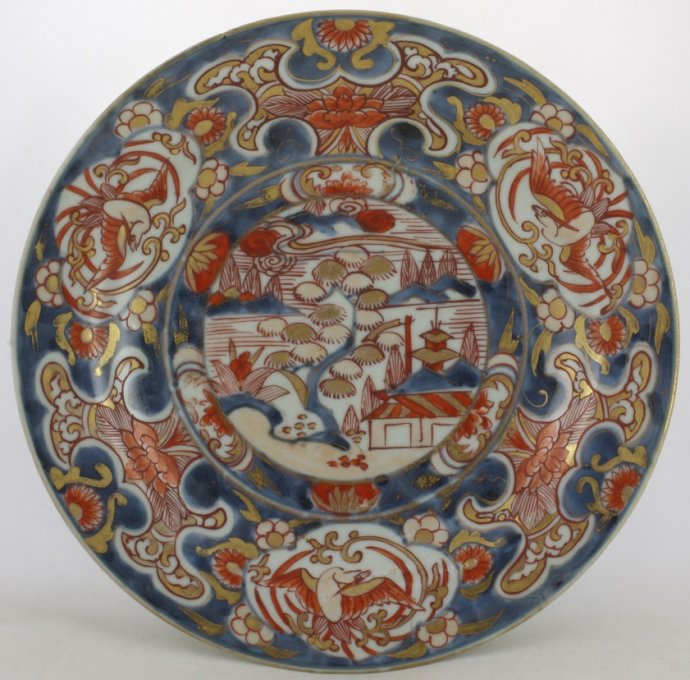 Dish on footring, flat rim. On the base three spur-marks (one with the cone still intact and attached) in a V-pattern. Imari, decorated in underglaze blue, iron-red and gold with river scape with trees, mountains and clouds surrounded by a narrow border with florets between scrolls alternating with leafy scrolls in gold on an underglaze blue ground. The sides and rim with three shaped panels filled with a bird in flight alternating with three panels filled with a flower head surrounded by leafy scrolls on a underglaze blue ground with flower heads in iron-red and leafy scrolls in gold. On the reverse three prunus sprays.

Condition: Some firing flaws to the rim. 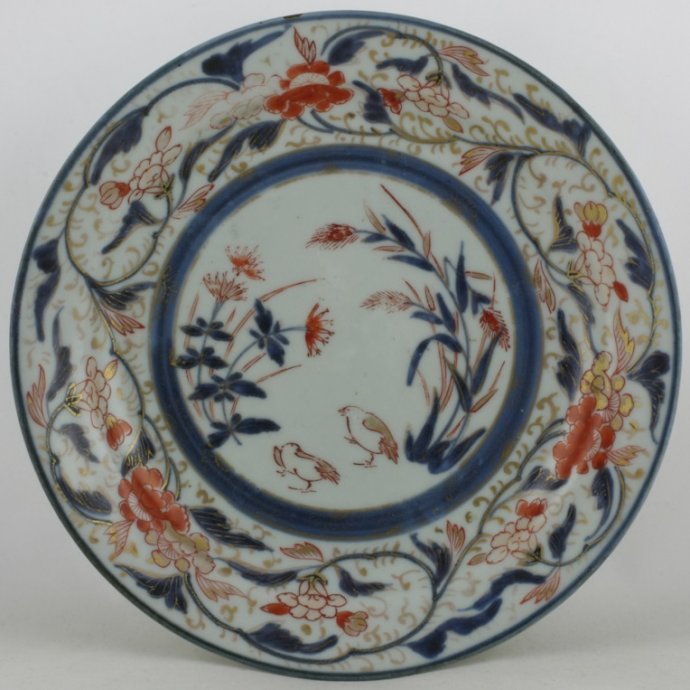 Dish on footring, flat rim. On the base five spur-marks in a X-pattern. Imari, decorated in underglaze blue, iron-red and gold with two quails amongst flowering plants surrounded by a border of half chrysanthemum flower heads in gold on an underglaze blue ground. On the sides and rim leafy and flowering peony scrolls. The reverse is undecorated.

The quail, or a pair of quails, fairly often used as a motif on fine porcelain, is a symbol of courage because of its fighting qualities. (Jörg & Van Campen 1997, p.213) 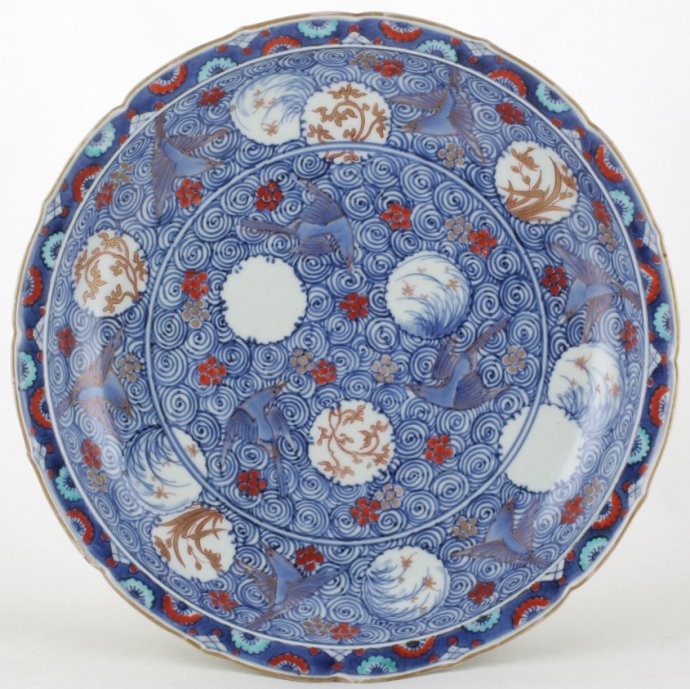 Dish on footring, straight sides, short flat rim with an upturned scalloped edge. On the base five spur-marks. Imari, decorated in underglaze blue and overglaze iron-red, turquoise enamel and gold with birds in flight alternaing with roundels filled with flowering plants or left blank on an underglaze blue ground of swirling snowflakes with flower heads in iron-red and gold.

On the sides birds in flight alternating with two connected roundels either filled with a flowering plant or left blank alternating with a single roundel filled with a flowering plant or left blank on an underglaze blue ground of swirling snowflakes and flower heads in iron-red and gold. On the flat rim half flower heads alternate with a lozenge. On the reverse a wide leafy floral scroll with flower heads in iron-red. Round the outer footring a continuous cloud pattern border in iron-red. On the outer footring a double concentric band. Marked on the base with a fuku ('luck') mark within a double-lined square in running script.

The 'fuku' ('luck') mark within a double-lined square (the most common mark, found on Kakiemon pieces), is originally a Chinese commendation mark. Fitski suggests that after 1700, workshops elsewhere in Arita also started to use the mark, but these are less carefully drawn and in some cases they are illegible, spiralling round four times, for instance, instead of three times. (Fitski 2011, p.164)

The unusual and rare 'swirling snowflakes' design can also be seen on a vase in the collection of the Ashmolean Museum, for this vase please see:

Condition: A frit and chip to the rim. 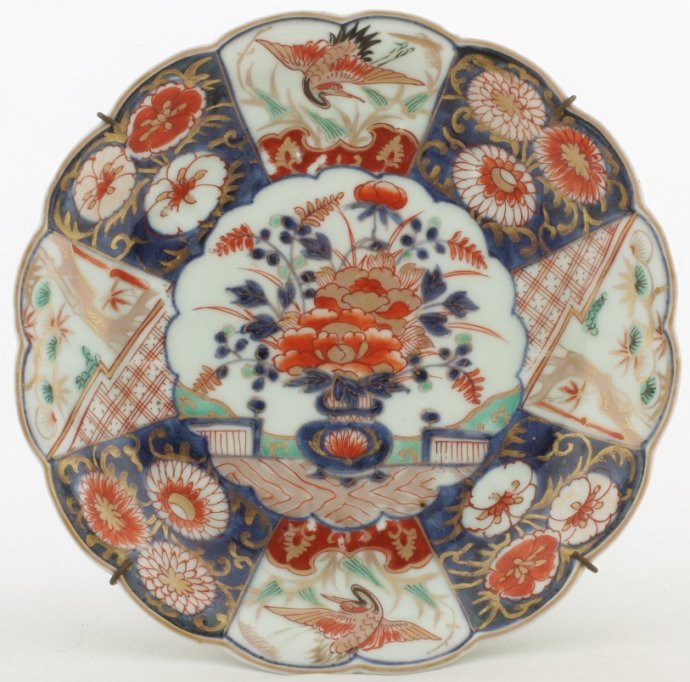 Dish on footring, spreading sides and a lobbed rim. On the base two spur-marks. Imari, decorated in underglaze blue, iron-red, green enamel and gold with a flower basket on a fenced terrace filled with a flowering peony and wisteria plants in a lobbed cartouche. On the sides and rim are divided into eight panels, four panels are fillled with foliate scrolls in gold on a dark blue ground with reserved chrysanthemum and peony flower heads, two panels are divided with on one side geometric patterns and on the other side a pine-tree the last two panels are filled with  a crane in flight. The reverse with three prunus sprays. Gilt rim. Fitted in a brass frame.

The crane is an auspicious symbol of longevity and a blessed life, a pair of cranes of a long and happy marriage. (Jörg 2003/1, p.185)