The decoration on the vases in this category show one of the most popular motifs used for decoration on export porcelain during the Kangxi period. Slender Chinese women in a garden may reflect a literary source, or may merely be depictions of beautiful ladies, but in combination with a dancing boy, his arm in the long sleeves of his garment, this motif probably comes from a deeper, older cultural layer. As recent research has shown, the dancing boy is connected to New Year's festivities and exorcism practises. In this context, the woman may be a personification of Xiwangmu, The Queen Mother of the West and a symbol of immortality. In the Netherlands, the lady and the boy were known by their Dutch names 'Lange Lijs' and 'Zotje', names that were taken over in English as 'Long Eliza' and 'the Fool'. They were the epitome of Chinese exoticism for the Western beholder and served as a model for numerous imitations in chinoiserie settings. (Jörg 2011/2, p. 37)

A ribbed baluster vase on a flat unglazed base. Fitted with marked (1870) and engraved Dutch silver mounts. Decorated in underglaze blue with two 'Long Eliza' figures and two little dancing boys, in Dutch zotjes in a garden with a fence and flowering plants growing from pierced rockwork. The silver marks explained: the makers mark or year letter 'L' which stands for the date mark 1870, the sword mark was used (1814-1905) as the standard mark on articles too small for the full hallmarking.

The philosopher (Mengzi (also: Mencius, 370-290BC) is considered the second-greatest sage of China after Confucius. There is a saying in China, mengu sanqian (Mengzi's mother moved three time), meaning that a family simply has to move house if the surroundings of the home harm the development of a child's character, Legend has it that after the father's death. mendzi's family moved near to the graveyard in order to be close to the father's grave. Soon Mengzi and the children in the neighbourhood started to imitate mourners. The mother did not think this a suitable atmosphere for a Confucian education and moved to the vicinity of a marketplace, where Mengzi imitated the shouts of the stallholders. At long last the mother moved to live in the vicinity of a school, where Mengzi tried to be like the teachers and eventually became a scholar himself. The number 'Three' in the saying of course does not mean exactly three, but 'many' moves instead. From the various versions of the story, this baluster vase depicts a fight between little Mengzi and a boy next door as the reason for moving. Hence the scene on the baluster vase exemplifies motherly care. (Suebsman 2019, p.38)

Condition: Some glaze rough spots to the ribbed body and a tiny frit to the flat foot. 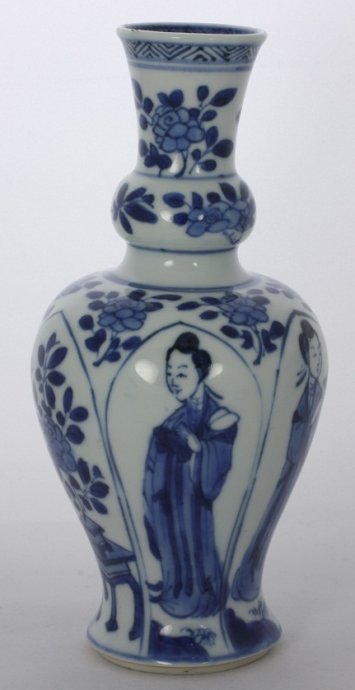 Condition: A hairline to the rim, two tiny spots on its rim caused by popped bubbles of glaze during the firing process and two tiny firing flaws to the centre of the base.

Vase on a high, splayed foot, recessed base, a flat knob between the foot and the elongated ovoid body. Fitted with Dutch silver mounts (unmarked). The original cover is missing. Decorated in underglaze blue with around the foot a lotus leaves pattern border, on the neck and shoulder blooming flowers. On the body six moulded panels showing a flowerpot on a stand alternating with two panels filled with a 'Long Eliza' figure.

For an identically shaped and decorated vase, please see; 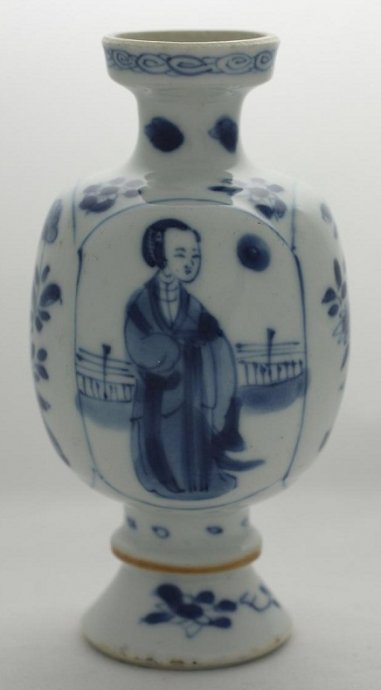 Vase on a high, splayed foot, recessed base, a flat knob between the foot and the elongated ovoid body. Neck with everted mouth with a straight standing rim. Rim unglazed inside for cover, now missing. Decorated in underglaze blue with around the foot two floral sprays, on the body four moulded panels showing a flowerpot on a stand alternating with 'Long Eliza' figures standing in a fenced garden. On the shoulder and neck blooming flowers. Around the rim a continuous clouds pattern border. 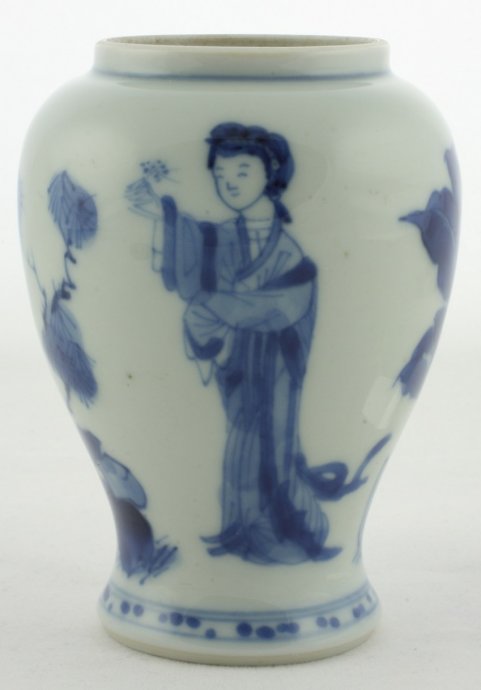 Baluster shaped vase on footring with a spreading foot and a wide mouth. The rim unglazed inside for cover, now missing. Decorated in underglaze blue with a banana and a pine tree growing from pierced rockwork and two 'Long Eliza' figures holding a flower. 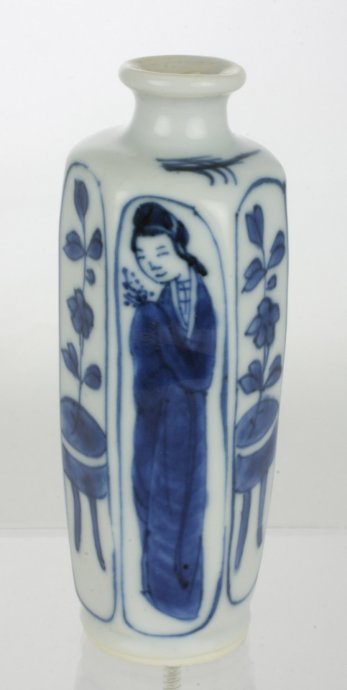 A six sided vase on a footing. Decorated in underglaze blue with six panels showing a basket filled with a flowering plant on a stand alternating with panels filled with a 'Long Eliza' figure holding a flowering branch. On the shoulder two sketchily drawn flower sprays. 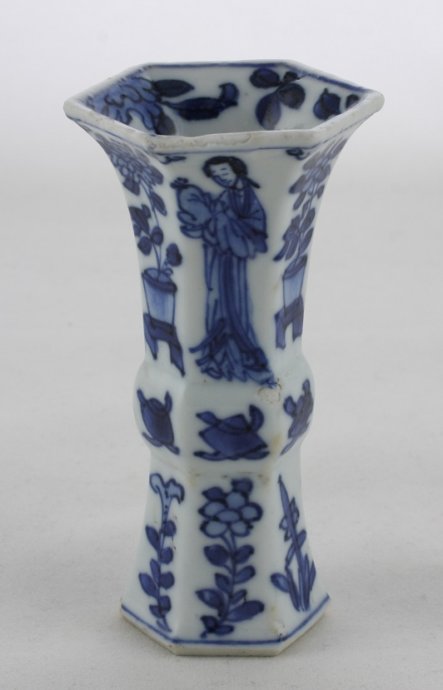 A six sided vase on a footing. Decorated in underglaze blue on the lower half with flower sprays, on the bulb middle section with precious objects and on the upper half with a 'Long Eliza' figure alternating with a flower basket on a table. On the interior rim leafy branches and flower heads.

Condition: A frit to the footring, one glaze rough spot to the bulb middle section and two to the rim. 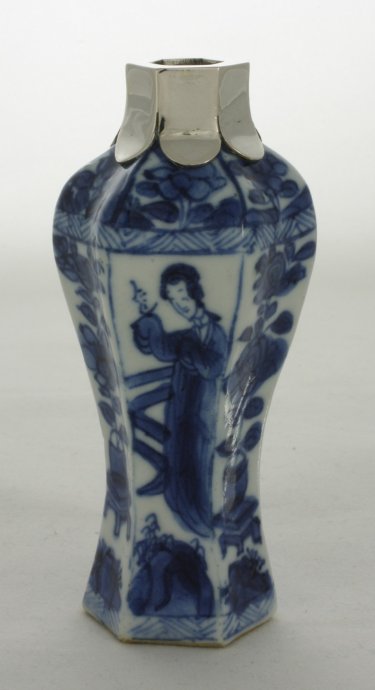 Small hexagonal baluster shaped vase on a hexagonal foot. Fitted with a Dutch silver mount (unmarked). Decorated in underglaze blue with six panels showing a basket filled with a flowering plant on a stand alternating with panels with a 'Long Eliza' figure holding a flower. On the foot and round the shoulder a zig-zag lines pattern border.

Condition: A firing flaw (tiny glaze imperfection) and a fleabite to the foot.

For a similarly shaped, sized and decorated vase, please see: 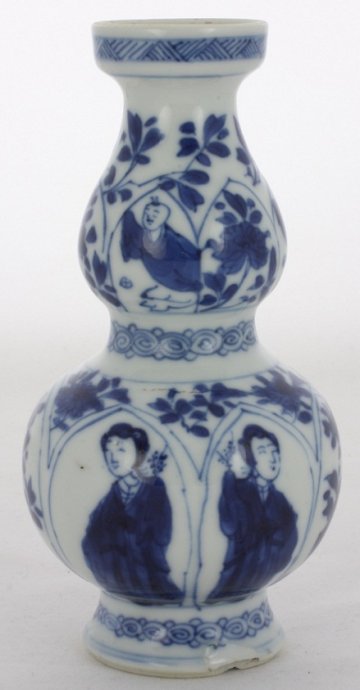 Double-gourd vase on footring. The rim unglazed inside for cover, now missing. Decorated in underglaze blue with around the foot and waist a cloud pattern border. On the body six moulded panels alternately filled with a flowerpot on a stand and 'Long Eliza' figures. On the neck panels alternately filled with flower sprays and little dancing boys. Around the rim a zig-zag lines pattern border. Marked on the base with the single character mark: Yu, (Jade (Yuan to Qing)), in a double circle, underglaze blue.

Condition: A hairline to the rim and a firing flaw to the body and footring.