Soft-paste porcelain, which is quite different from European soft-paste, originated about 1700 and became popular in the second quarter of the 18th century as part of the export assortment. Unlike ordinary porcelain, it is not translucent and often has a creamy-white appearance. The glaze is often finely crackled as the result of a difference in cooling between the glaze and the body. The latter is made of a white-firing clay, called "huashi" or "slippery stone", the use of which is documented in the reports of 1712 and 1722 by the Jesuit Père d'Entrecolles. As this clay was expensive, soft-paste pieces are usually small and thinly potted. They are also well-painted, as the body is particularly suitable for detailed drawing. Besides this "true" soft-paste, there are pieces with an ordinary porcelain body and a coating of "huashi" clay, which gives the same effect. Due to the porous nature of the fired "huashi" clay, soft paste objects are overall lighter than hard paste objects. The production for export flourished between 1725-1745 and came to a stand around 1750, twenty years later the production revived but the quality of the objects produced never reached the quality level of the previous production. Only a few Chine de commande objects are known to be made of soft paste porcelain, most famous being 'Neptune'  and this 'Castaways or slaves' design. (Jörg & Van Campen 1997, p.117), (Oort & Kater 1982, p.155) & (Sargent 2012, p.304) 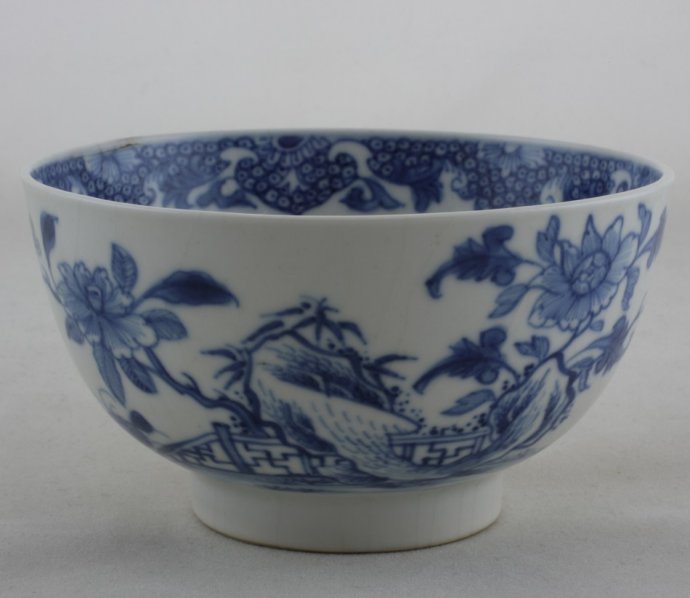 Condition: A firing flaw to the rim.