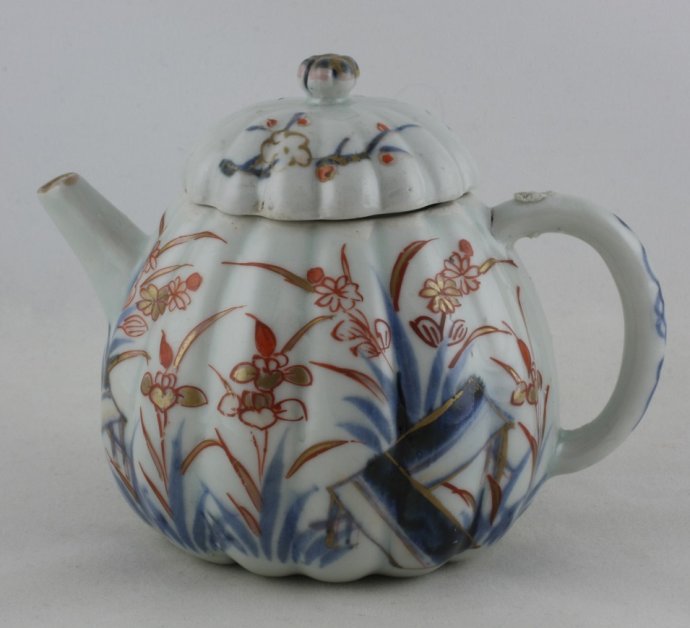 Globular pear-shaped teapot on footring, fluted body. Curved handle and a straight spout. Ribbed cover and knob. Imari, decorated in underglaze blue, iron-red and gold with irises, reeds and three zigzag plank bridges (yatsuhashi). On the handle a floret between scrolls and on the spout stylised spays. On the cover two wide spread flower sprays.

Condition: Firing flaws on the handle and cover, a fleabite and a frit to the inside rim of the cover.

Small bowl on footring, steep sides and straight rim. Imari decorated in underglaze blue, iron-red and gold with on the outside irises, reeds and three zig-zag plank bridges (yatsuhashi), On the bottom a single flower spray in a single concentric band.

A bowl of this size, to large to be used as a coffee cup or tea bowl, would probably have been part of a coffee or tea service and served as a sugar bowl.

For another identically shaped and sized sugar bowl, please see:

Impey illustrates an identically decorated coffee pot and states that an identical example is in the collection or Oriental ceramics in the Groninger Museum, Groningen. (Impey 2002, p.206) 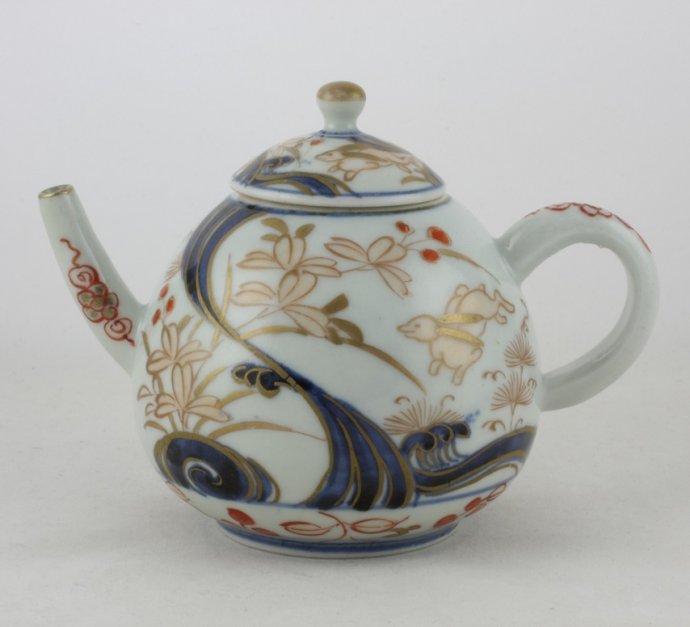 Small oviform teapot on footring. Curved handle, slightly bent spout. Domed cover with round knob. Imari decorated in underglaze blue, iron-red, gold and a light-pinkish gold wash with flowering plants and a white hare running away from swelling, foaming waves. Around the foot a border with flowers and leaves. On the handle and spout florets between scrolls. The cover is decorated en suite.

Apparently, the motif of the running hare was popular on Japanese porcelain. It is generally depicted combined with waves or the moon in some form or amidst waving pampas grass.

This particular hare pattern is known on bowls, teacups and saucers and a rare milk jug, indicating that tea sets with matching parts were made for export.

The hare (usagi) is associated with the moon and old age. Legends says that the female conceives by running on the waves –  represented by the curved underglaze blue lines -  on the 18th day of the 8th month when the sky is clear and the moon is reflected in the water. The female can also conceive by licking the fur of the male during the same period or simply by gazing at the moon.

Yet another account says that the crocodiles ran after him and snapped his white fur to take revenge because he had laughed at them for their stupidity. After the hare repented and promised never to use deceit again, the fairy Okuni-nushi-no-Mikoto helped him regrow his fur. (source: http://etc.usf.edu/lit2go/72/japanese-fairy-tales/4887/the-white-hare-and-the-crocodiles/)

For an identically shaped and decorated teapot is in the collection of Oriental Ceramics in the Groninger Museum, Groningen, please see:

For bowls and a rare milk jug with identical decoration, please see:

Condition: A restored cover and tip of the spout. A hairline to the base, originating from a firing flaw caused by the firing process in the centre of the base due to it being potted to thinly. 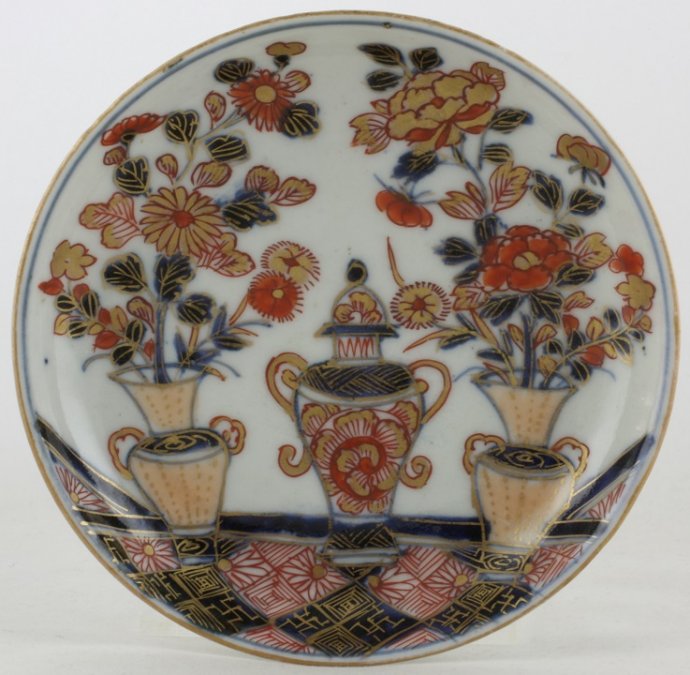 Saucer on footring, slightly everted rim. Imari decorated in underglaze blue, iron-red and gold with a three-piece garniture on a horizontal band over a diaper pattern. The covered jar is decorated with floral designs and zig zag lines pattern borders, the vases are decorated with rows of dots. One of the vases is filled with branches of flowering chrysanthemum and carnation the other with branches of flowering peony and carnation. The reverse is decorated with three stylized flower sprays and three blue circles round the foot. On the base a single blue circle. Some kiln sand adhering to the base.

For this identically shaped, sized and decorated teacup and saucer in the Dresden collection, please see:

Jörg states that the use of garnitures as a decorative motif on tea ware was probably done as a suggestion of luxury, he illustrates it with a teacup and saucer decorated with an interesting five-piece garniture. A similar but simplified motif is seen on Delftware pieces, which were probably inspired by such Japanese examples. (Jörg 2003/1, pp.198-199, cat. 250)

For a teacup and saucer decorated with a five-piece garniture, please see: 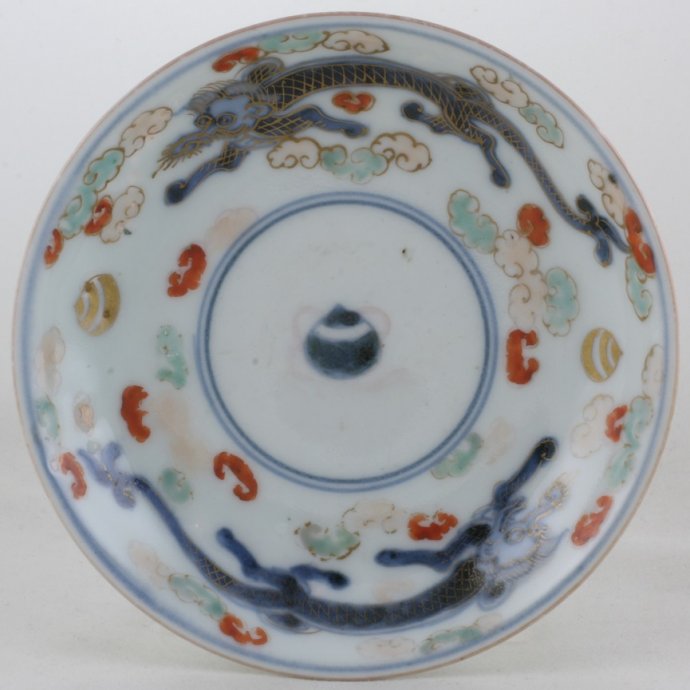 Saucer on footring, straight rim with a slightly everted edge. Imari decorated in underglaze blue with overglaze iron-red, green enamel, gold and a light-pinkish gold wash with a pearl with knotted ribbons in a central roundel. On the sides two dragons chasing a pearl through swirling clouds. The reverse is undecorated.

Chinese dragon, also known as Long or Lung, are legendary creatures in Chinese mythology, Chinese folklore and Chinese culture at large. Chinese dragons have many animal like forms such as turtles and fish, but are most commonly depicted as snake-like with four legs. They traditionally symbolize potent and auspicious powers, particularly control over water, rainfall, typhoons, and floods. The dragon is also a symbol of power, strength, and good luck for people who are worthy of it in East Asian culture. During the days of Imperial China, the Emperor of China usually used the dragon as a symbol of his imperial strength and power. Many pictures of Chinese dragons show a flaming pearl under their chin or in their claws. The pearl is associated with spiritual energy, wisdom, prosperity, power, immortality, thunder, or the moon. Chinese art often depicts a pair of dragons chasing or fighting over the flaming pearl. (source: Wikipedia)

The original Chinese design of a dragon chasing a flaming pearl can also be found on other Japanese export wares, for a sold Japanese mustard pot decorated with the design in blue-and-white, please see: 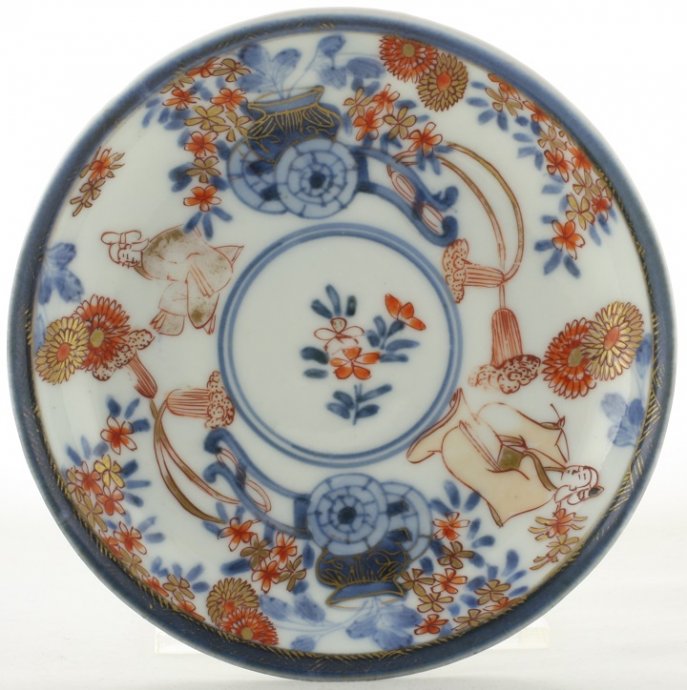 Saucer on footring, slightly everted rim. Imari decorated in underglaze blue, overglaze iron-red, black and gold with a flower spray in a central roundel on the sides a hand cart loaded with a flower pot filled with flowering plants alternating with a bijin in kimono. Around the rim a zig-zag lines pattern border. On the reverse three flowering prunus sprays.

Bijin is a Japanese expression that is derived both from the English word "vision" and used to describe women of beauty. (animenewsnetwork.com)

Two identically shaped, sized and decorated sets of teacups and saucers of which one set was found in England and the other set in the Unites States, are in an English private collection.

For a similarly decorated dish (incised on the base with the inventory mark of the Royal Saxon Collection of King Augustus the Strong), please see;

Condition: A firing flaw to the rim and wear to decoration of the kimonos. 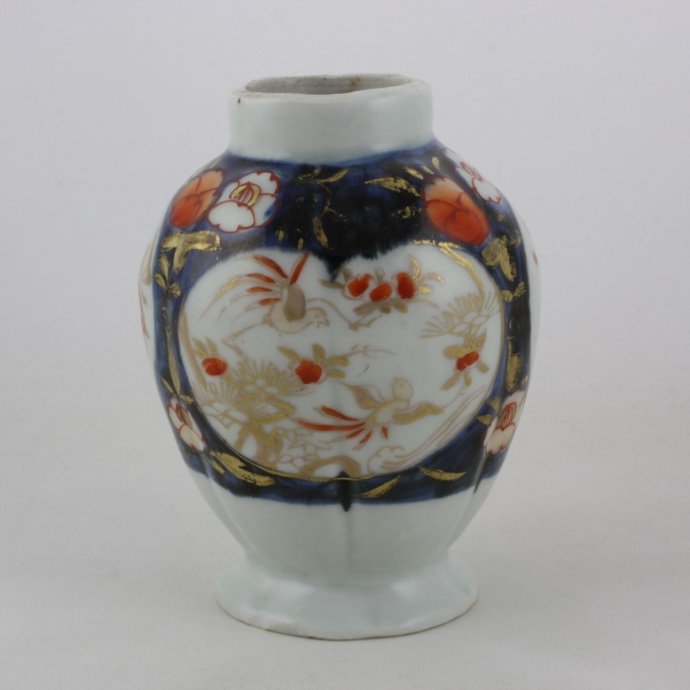 Tea caddy of baluster form on a splayed, domed foot with a fluted body. Upright neck, rim unglazed inside for cover, now missing. Imari decorated in underglaze blue, iron-red and gold with three kidney-shaped panels reserved on a dark blue ground filled with flowering plants and birds. The panels are flanked by three flowerheads on a dark blue ground with leafy scrolls in gold.

For an identically shaped and decorated tea caddy, please see:

Condition: A shallow frit to the rim and a small chip to the foot. 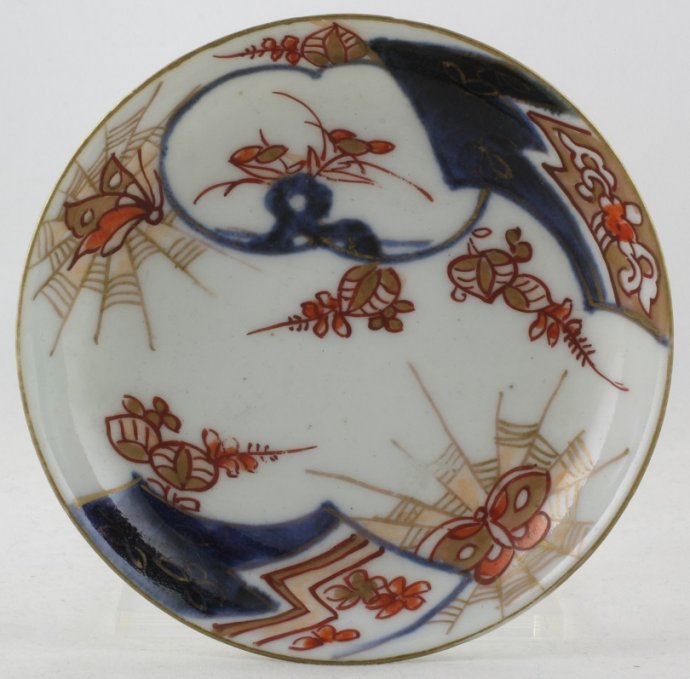 Saucer on footring, slightly everted rim. Imari decorated in underglaze blue, iron-red and gold with irregular panels filled with flower sprays and butterflies on a cobweb. The reverse is undecorated.

For an identically decorated teacup and saucer, please see;

For other objects decorated with a cobweb, please see:

Condition: A firing flaw to the footring.