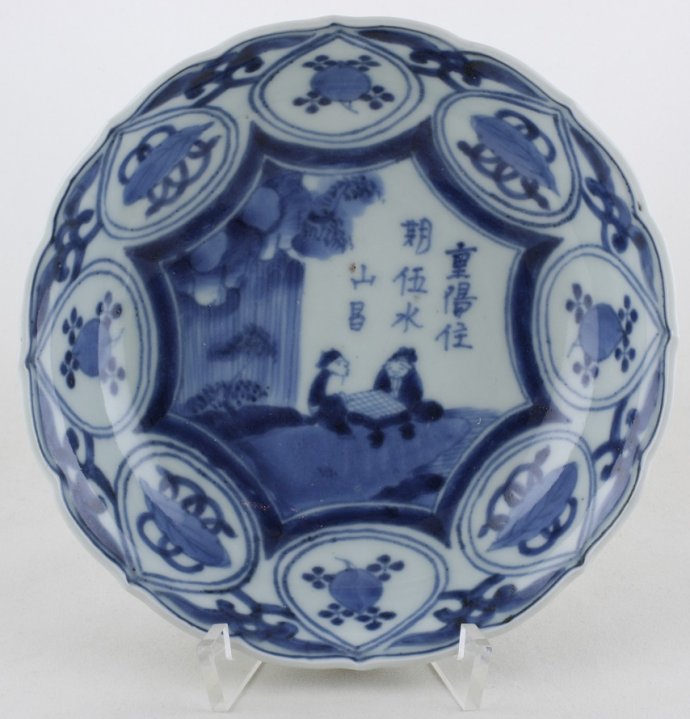 Small dish on footring, everted and scalloped rim. The meisande, or petalled, style decoration in underglaze blue with two seated men playing 'Go' near a shore with a waterfall and rocks and plants to the left and a poem to the right that reads: "On the feast of the ninth of the month he receives his friend at his home; river and mountains are sun-drenched", encircled by an eight-pointed scalloped medallion. On the sides and rim eight round, or onion shaped, medallions, decorated with peaches and auspicious symbols, in between each medallion a single looped bow. On the reverse eight broad panels each filled with five dots. (Lunsingh Scheurleer 1971, p.19)

For an identically shaped, sized and decorated dish, please see:

In 1971 Lunsingh Scheurleer added this small dish to a group of dishes all dated 1675-1700. Nowadays, due to ongoing research this small dish actually has to be dated around the last quarter of the 18th century.

The shape and decoration on this small dish represents a small group of late 18th century Japanese porcelain made after Chinese kraak examples. An interesting element is that the central design which is very Japanese (instead of Chinese) with the waterfall composition. According to Finch these wares were produced during 1740-1800.  The eight-pointed medallion surrounded by the eight round, or onion shaped, medallions are what the Japanese called meisande. (Finch 1998, p.16)

For a similarly shaped larger dish from the same period, please see:

For another dish also decorated with a poem dating from the same period, please see:

For an example of a Japanese Imari dish decorated also decorated with a waterfall, please see:

For an 18th century Japanese beaker also decorated with a poem, please see: