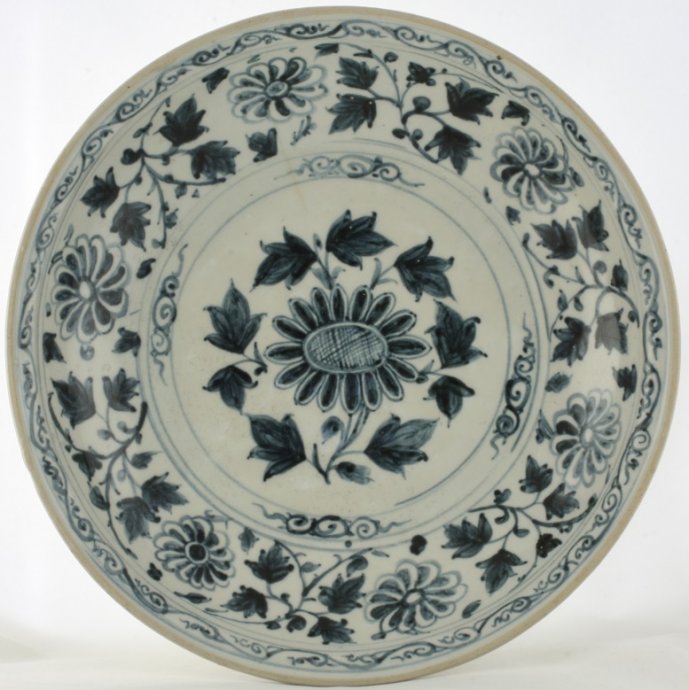 Dish on footring, spreading sides, narrow flat rim with raised edge. Decorated in a strong underglaze blue with a large chrysanthemum spray with leaves. On the sides chrysanthemum and leafy scrolls. On the rim a 'classic' scroll motif. The edge unglazed. On the reverse a band of lotus panels containing leaf-forms. The base is covered with a chocolate slip of iron or manganes oxide, applied spirally on the biscuit, from the centre of the base outwards

Vietnamese stone wares and porcelains were an important trade item in the 15th and 16th centuries throughout S.E. Asia. Jars, bowls, architectural elements, figures and in particular large, sturdy porcelain dishes were part of the varied output of the many kilns in northern Vietnam. Competition with Chinese ceramics is evident - even on the markets of the Middle East - but at the same time the Vietnamese wares have their own identity and charm. The decorations are painted in an easy way, with quick strokes of the brush, without becoming coarse; the blue usually shows darker and lighter shades. Motives include peonies and lotus, birds, fishes and mythical animals like dragons. The chocolate-brown base is a characteristic that only is found on Vietnamese wares; its function is not clear yet.

Condition: A firing flaw and a P-shaped hairline to the rim.