Teacup and saucer on footrings, slightly everted rims. Decorated in various famille rose enamels with a peacock near a tiled terrace in a garden landscape with rockwork, a lingzhi, a flowering peony tree and flowering plants. On the rim a diaper-pattern border with four reserves filled with leafy scrolls. The reverse is undecorated. The teacup is decorated en suite.

The peacock is a symbol of dignity and beauty. It wards off evil and dances when it sees a beautiful woman. As peacocks' feathers were used during the Qing dynasty to denote official ranks, the peacock motif might also express a wish for a good position. (Jörg & Van Campen 1997, p.157)

For a dish similarly decorated in various famille rose enamels with peacocks in a garden landscape, please see;

Teacup: A tiny frit to the rim.

Dish on footring, wide flat rim. Decorated in various famille rose enamels and gold with flowering peonies, begonias, chrysanthemums and other flowers in a complex cartouche. On the sides and rim flowering peony and chrysanthemum sprays on a whorl-pattern ground flanked by flower heads alternating with cartouches filled with a tied flower head with swirling ribbons and a pearl ribboned pendant with Chinese stone chimes and a ruyi with three ribboned pearl pendants. On the reverse two large peony flower sprays in iron-red. On the base a rectangular paper label which reads: '4000'.

The begonia comes in a variety of flower colours. In Chinese older times, it represents happiness and beauty, due to its blooming and attractive flowers. It has been mentioned in poems and literatures where it often is related to pretty ladies. In the Chinese art and craft world, the word ‘begonia shape’ is used to descript a certain shape or form similar to the begonia flower head. (I am indebted to Mr. S. Fan, Doncaster for this information)

It has been suggested that the objects the just above the ruyi are tied Chinese stone chimes moved by the wind, which is also indicated by the swirling green ribbons. (I am indebted to Mr. D. Ballanger, France for this information) 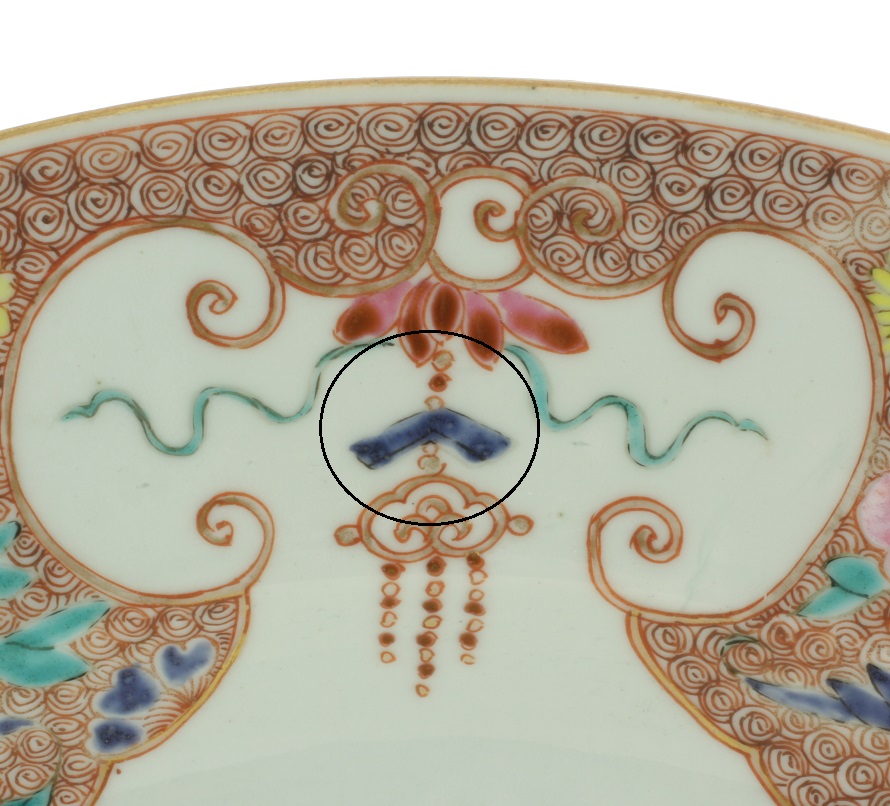 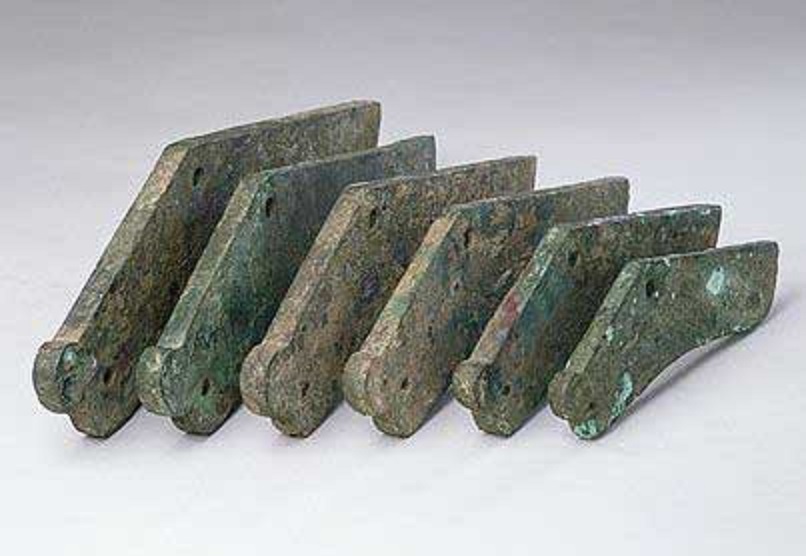 Little dates this dish at about 1740, as Meissen copies from this date are known. (Lion-Goldschmidt 1957)

In the late 17th / early 18th century porcelain with enamelled decoration became very successful. This continued throughout the 18th century and an even greater assortment of shapes, colours and techniques developed. The rose/pink colour was an important addition to the palette. In 1862 Jacquemart and le Blant categorized the various enamel decorating colours, wares with this pink enamel in the decoration were named famille rose. The knowledge of how to make the colour reached Jingdezhen in the early 1720s and porcelain with an opaque pink enamal was made from c.1725 onwards. Early examples have a rather dull, mauve tint but soon the colour became more vibrant and semi opaque, although it did not achieve the transparency of the verte enamels. By mixing the pink with the recently developed lead/arsenic white enamel different grades of opaqueness could be obtained as well as various intensities of pink. The new colour soon became immensely popular and was combined with other enamels such as green, iron-red, overglaze blue, turquoise, brown and black, while gilding was applied to enhance details. After c.1730 famille rose rapidly succeeded famille verte as the main style of enamelling for the Western export markets. About half of the regular export assortment of the VOC and other companies consisted of 'enamelled' wares, as polychrome porcelain was generally called then, with the pink enamel dominant in a palette. These more ordinary wares were less refined and not so well painted but they nevertheless sold very well in Europe. Generally speaking, enamelled decorations on export porcelain of the second half of the 18th century tend to become somewhat stiff and uninspired, repeating the well-known motifs without much variation in rather dense compositions. However, in the late 18th and early 19th centuries a revival began, probably due to the interest of the Americans as new buyers. (Jörg & Van Campen 1997)

Condition: A firing flaw in the centre. 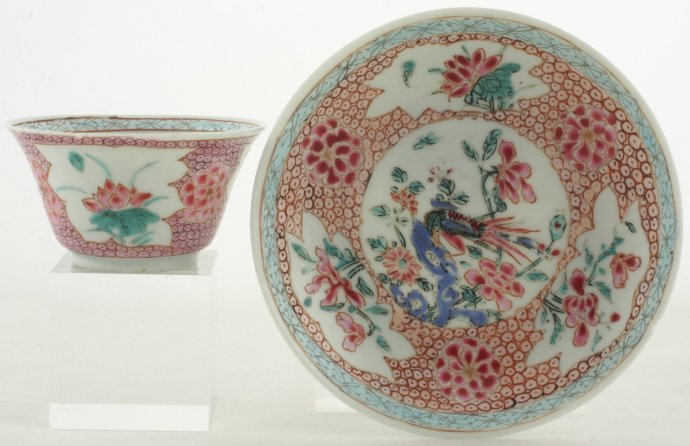 Teacup and saucer on footrings with spreading sides and rims, Decorated in various overglaze, famille rose, enamels. Decorated with a roundel filled with a pheasant perched on a pierced taihu (garden) rockwork with flowering lotus, peony and chrysanthemum plants. On the sides three scalloped cartouches filled with a flowering plants reserved on a cell-pattern ground enriched with flower heads. Round the rim a trellis-pattern border. The reverse is undecorated. The teacup is decorated en suite.

The pheasant on a taihu (garden) rock is a very popular motif on export porcelain and frequently appears on enamelled and underglaze blue Kangxi wares. According to Williams, in the Chinese bureaucratic hierarchy officials of the second grade had a gold pheasant embroidered on their court robes, those of the fifth grade a silver pheasant. The bird was represented as standing on a rock, looking towards the sun, the imperial symbol of authority. The term 'famille rose' was first coined by the 19th-century French author Albert Jacquemart, who distinguished between specific groups in his descriptions of Oriental ceramics. (Williams 1976, pp.322-323), (Jörg & Van Campen 1997, p.157), (Jörg 2003/2, p.25)

Condition saucer: A firing flaw and a frit to the rim.

Saucer on footring, slightly everted rim. Decorated in various famille rose enamels with in the centre and the foreground three spotted deer: one pink, one yellow, one white. They are prancing around  in a Chinese landscape with many funghi growing on rocks. The white spotted deer is carrying a lingzhi in his mouth. In the background a mountainous landscape. The reverse is undecorated.

Between 1720 and 1730 the Chinese porcelain producers developed a new enamel colour, pink. It derived from colloidal gold. The technique was first used in China in the Imperial workshops in Beijing, for coloured glass and enamels on metal. It became very successful instantly and soon replaced famille verte. The term famille rose was first coined by the 19th-century French author Albert Jacquemart, who distinguished between specific groups in his descriptions of Oriental ceramics. (Jörg & Van Campen 1997)

The spotted deer design symbolises best wishes for a career as an official and good fortune and prosperity. This is because the Chinese word for deer, lu, has the same sound as the word for the high salary of a Chinese official. Another reason for the association with Chinese scholar-bureaucrats or literati is that one of the concluding rituals of the provincial examinations that had to be passed if one was to become an official in the Chinese civil service was a party known as the Banquet of Auspicious Omens, ore more literally the Deer-cry Banquet.

More frequently however, in Daoist mythology the spotted deer are considered auspicious animals connected to immortality. This is because they were believed to attain great age. Furthermore, they were the only animals able to locate and eat the special fungus of longevity, lingzhi. These special mushrooms were found on the paradise islands of Penglai. In Chinese mythology the Penglai mountain is often called the base of the Eight Immortals, or at least where they travelled to have a banquet. In Chinese art the spotted deer usually accompanies Shoulao or Magu, the God and Goddess of Longevity. Because of all this, even today the horns of deer have an important place in Chinese medicine and can be found in every Chinese apothecary shop. The soft internal part of the horns is dried, pulverised, and made up into pills. The inferior parts are boiled up into jelly or tincture.

The importance of spotted deer in Chinese culture today was also reflected in a gift by Taiwan to the Chinese mainland in 2011 of two rare sika or spotted deer for the Liugongdao National Forest Park in east China's Shandong Province. (GOV.cn Chinese Government's Official Web Portal). The sika deer is one of the very few deer species that does not lose its spots upon reaching maturity. Spot patterns vary with the region. The color of the pelage ranges from mahogany to black, and white individuals are also known.(source: wikipedia.org)

According to Bjaaland Welch, in Chinese legends the different colours of the deer signified the age: a 1000-year-old deer was depicted with grey fur, a white one, as can be seen on this saucer, stood for an impressive age of 5000 years.

Condition: A frit with a connected hairline to the rim and a restored hole in the centre. 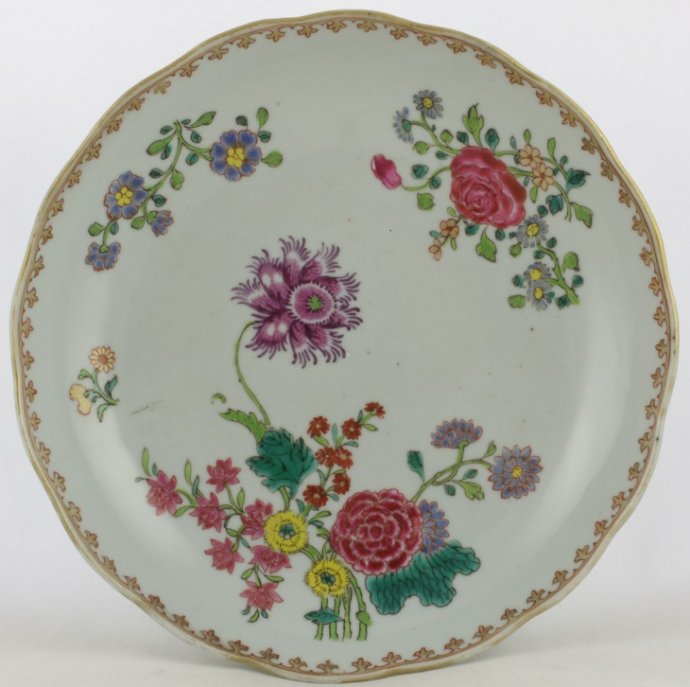 Dish on footring, straight rim with a scalloped edge. Decorated in various famille rose enamels, iron-red and gold with scattered 'German flowers'. Around the rim a spearhead-pattern border. The reverse is undecorated.

This decoration was closely copied by the Chinese porcelain painter from a Meissen or other factory example. The term 'famille rose' was first coined by the 19th-century French author Albert Jacquemart, who distinguished between specific groups in his descriptions of Oriental ceramics. (Jörg 2003/2, p.25).

Condition: A hairline and some glaze rough spots to the rim.