Six sided vase on footing. Rim unglazed inside for cover, now missing. Decorated in underglaze blue, so-called, criss-cross hatching lines technique, on all six sides, neck and foot, with leafy branches and leaves, Around the neck and rim a zig-zag lines pattern border. Marked on the base with the symbol mark: Artemisia leaf, underglaze blue.

These criss-cross lines are not a Chinese way of painting on porcelain and may have been influenced by the Dutch. This technique was short-lived for it mostly occurs on blue-and-white export wares around 1700. It occurs on teacups and saucers, beakers and small jars with covers, garnitures and other items. The style was short lived, disappearing in the early 18th century. (Jörg & Flecker 2001, pp. 68-69)

For a similarly shaped and decorated vase, please see

Condition: Some tiny shallow frits to the footring and mouthrim.

Small hexagonal baluster shaped vase on hexagonal foot. Decorated in underglaze blue with three facets filled with a ´Long Eliza´ figure alternating with flowering peony and chrysanthemum plants. Round the mouthrim a single flower head pattern border. The three "Long Eliza" figures stand above one of the ´Eight Buddhist Emblems´ namely: Shell (luo), emblem of good omen, symbol of luck. and two of the ´Eight Precious Objects´ namely; Picture (jing), which is considered to be a bronze mirror from ancient times and Pearl (zhu), emblem of the omen of happiness, often pursued by dragons. On the base the Chinese character '怡', (meaning, harmony, pleasure, joy or be glad), most likely indicating the name of the shop making the object. (Pinto de Matos 1996, pp.273-280)

This decoration shows one of the most popular motifs of that time, the slender Chinese woman, holding a flower. In Dutch she was called a Lange Lijs, which became ´Long Eliza´ in English. (Jörg & Van Campen 1997, p.101) 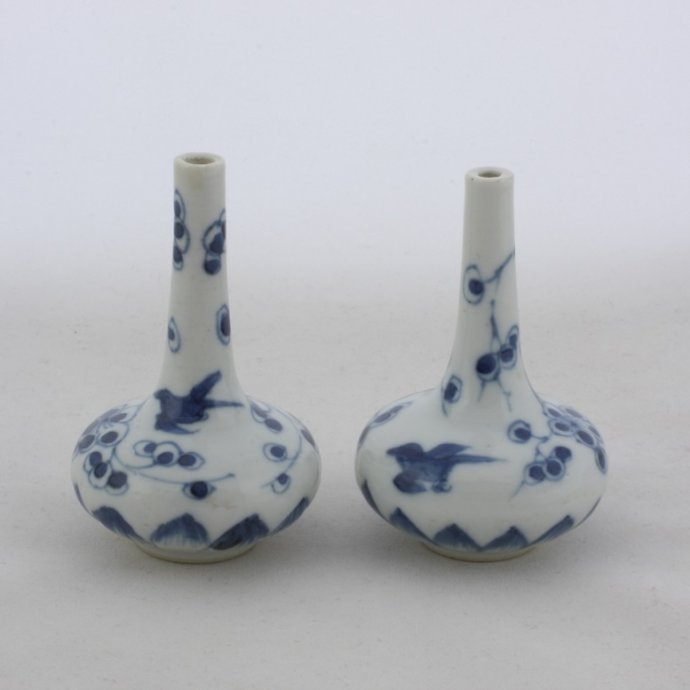 Two bottle vases on footrings, compressed globular bodies surmounted by tall narrow cylindrical necks. Decorated in underglaze blue with a bird in flight below sprays of plum blossom, round the foot a band of ascending lotus petals in low relief.

2010569: A tiny (restored) frit to the rim, a frit to the inner footring and some spots on the body caused by popped bubbles of glaze during the firing process.

Bottle vase on footring, compressed globular body surmounted by a tall narrow cylindrical neck. Decorated in underglaze blue with a bird in flight below sprays of plum blossom, round the foot a band of ascending lotus petals in low relief.

Condition: A frit and fleabite to the rim and some glaze frits and spots on the waist caused by popped bubbles of glaze during the firing process. 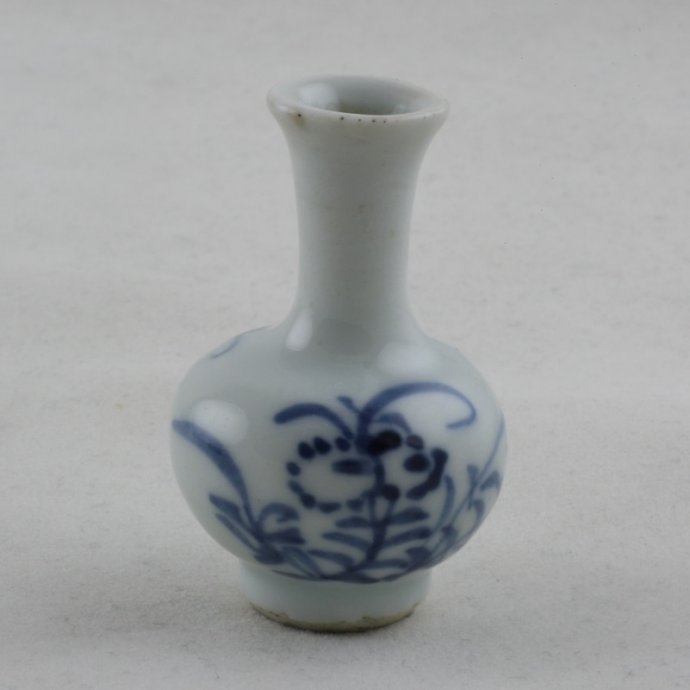 Miniature "doll's house" vase on a footring. Decorated in underglaze blue with flowering plants and insects in flight.

It was a popular pastime for the ladies of the Dutch patrician society to furnish doll's houses, whose various rooms reflected those of their own town palaces. Apart from the usual furniture, miniature versions of exotic luxury goods such as porcelain, fabrics, carpets and lacquer were obligatory. The doll's house of Petronella Oortman, now in the Rijksmuseum Amsterdam, and that of Lita de Ranitz in the Historical Museum of the Hague are considered to be the most prominent examples. The Chinese had produced miniature ceramics for almost one thousand years for the decoration of birdcages, therefore it was no problem for them to supply the Dutch with doll's house porcelain. Miniature pieces were also displayed in ordinary porcelain rooms in cupboards and on brackets along the wall. (Suebsman 2019, p.76)

Condition: Some very tiny popped blubbles of glaze, caused by the firing process, to the rim.

Small, pear-shaped, vase on a footring. Decorated in underglaze blue with flowering plants growing from rockwork with a single butterfly in flight. Round the rim a zig-zag lines pattern border. The vase stands crooked due to the firing process.

Condition: Firing flaws to the base, belly and rim. Some shallow glaze fleabites to the mouthrim.

Small, pear-shaped, vase on footring. Decorated in underglaze blue with flowering plants growing from taihu (garden) rock and a single insect in flight. Round the waist a zig-zag lines-pattern border on the neck two flower sprays.

Condition: A chip to the rim and a firing flaw to the inner footring.