Teapot of eight-lobed melon form on a footring. Rising spout and a C-shaped handle. Domed cover with round knob. Decorated in underglaze blue and famille verte enamels in close imitation of Japanese Kakiemon-style ware. The upright panels are framed in underglaze blue lines and enamelled with various flowering plants. On the shoulder and on the cover flower scroll borders. Around the foot, on the spout and handle lotus-scroll foliage. The knob of the cover is fitted with a gilt over silver finial shaped in the form of a Moors head. The cover is secured by a chain to the mount on the handle engraved with flowers and to cover on the spout with a standing rooster.

There are very few examples of direct Chinese copying of Kakiemon-style wares. They were no doubt made to meet a Western demand, for Japanese tea-making procedures did not require such a pot. The probability is that most of them were made for the foreign market soon after 1700 to compete, like the Chinese Imari wares, with Japanese originals. The Chinese version will have been supplied to the Dutch in Batavia, if not to European traders at other entrepôts. Interestingly, the blue enamel on the Japanese teapot is replaced by underglaze blue on the Chinese version  (Jenyns 1979, p.33, p.58,p.129,p.153), (Ayers, Impey & Mallet 1990, p. 234)

In Europe ormolu caps surmounted by figures of animals and connected by chains were fitted to the pot's handle, finial and spout in about 1720. This prevented the lid being lost or dropped while also enhancing the pot's luxurious appearance. (Düsseldorf 2015, p.169) 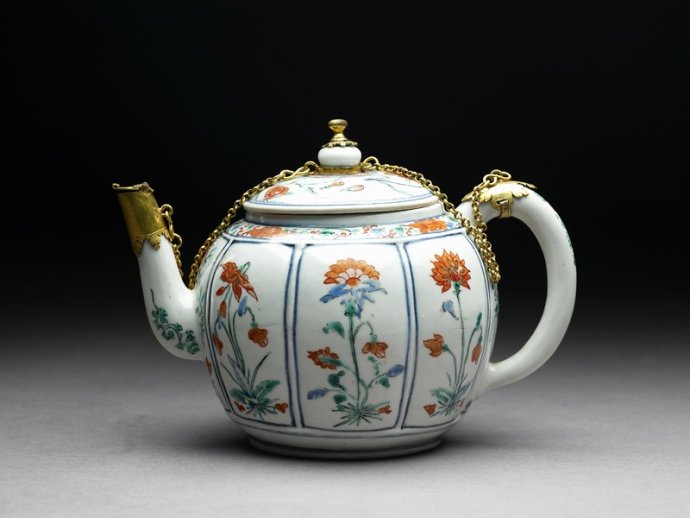 Teapot and lid, with European gilt metal mounts, Japan, 1680-1700, the mounts contemporary and probably Dutch. Ashmolean Museum Oxford England, 1978.658, Reitlinger gift. © Ashmolean Museum, Oxford, England. (this teapot and cover are not included in this sale/offer and serve only as an example)

Condition: A hairline originating from the base and ending to the side. 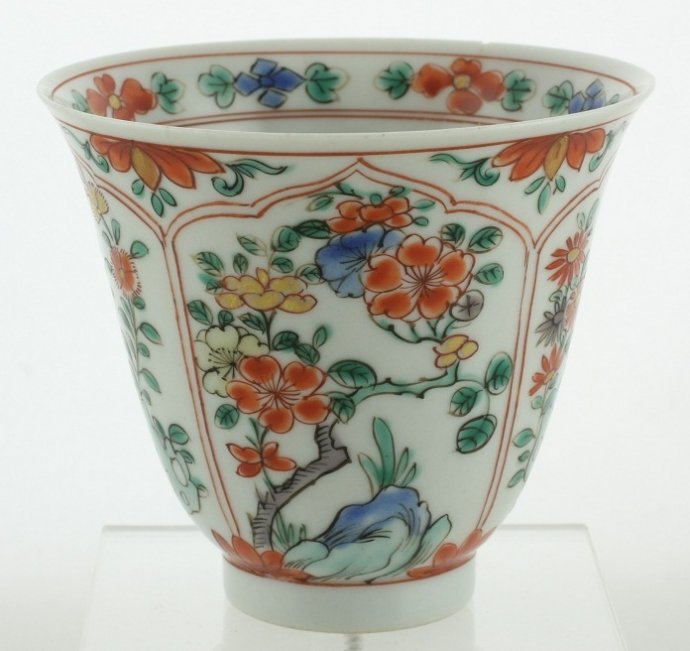 Chocolate beaker on footring, a steep wall with flaring rim. Decorated in various overglaze famille verte enamels with on the outside four panels filled with various flowering plants growing from rockwork. On the rim four half flower heads. Around the inside rim a border of eight flower heads, on the bottom a single flowering stem. Marked on the base with a square shop mark in a double circle, underglaze blue.

Cocoa was first brought to Europe by the Spaniards from Mexico in the 1st half of the 16th century. From Spain the cocoa beans were traded to Italy and The Netherlands, First used as a medicine, later at the end of the 17th century it was consumed as a pleasure drink. In 1722 Father d'Entrecolles already mentioned, high chocolate cups/beakers, in his letters. (Jörg & Van Campen 1997, p.116)

This chocolate beaker was originally part of a chocolate set together with a matching saucer and / or cover both now missing.

Condition: Three short hairlines to the rim, one with a tiny fleabite.

Not illustrated object 2010877B, another identically shaped, sized and decorated, sold chocolate beaker. 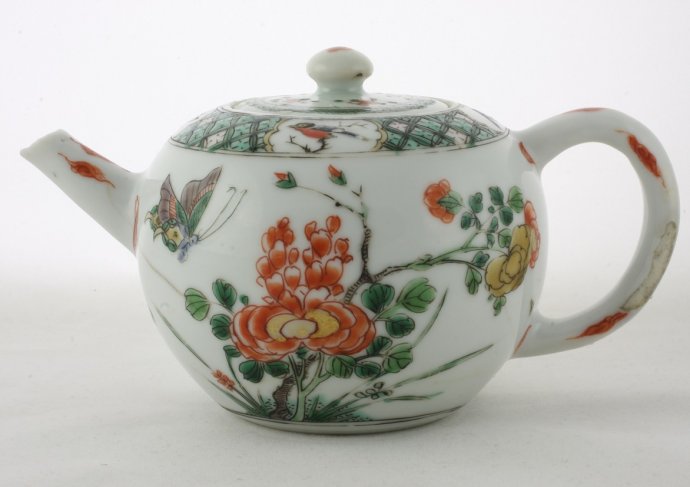 Globular teapot on a footring. Straight spout and a curved C-shaped handle. The inlaying flat cover with round knob. Decorated in famille verte enamels with flowering plants and butterflies in flight. Around the mouth a broad border with a trellis pattern ground with four cartouches with each a magpie perched on a branch or in flight in between half rosettes. On the cover four flowering branches, round the edge a zig-zag pattern border. On the knob a single flower head. The handle and spout are decorated with stylized cloud motifs. The cover has been pierced.

Only grown in China and Japan during the 17th Century, tea became known in the Netherlands early because the Dutch East India Company (VOC) shipped small quantities home. Its use as a beverage was established slowly, and was probably started by retired VOC employees who had become accustomed to drinking tea in the East. At a tea party, the expensive beverage was served in small teapots, one for each guest, filled with the leaves of the type he or she preferred. The tea was poured into small cups, while the teapot was refilled with hot water from a metal or sometimes ceramic kettle. The small quantity of famille verte teapots still abound reflects the demand in Europe at the time. Elaborately decorated, they must have been regarded as luxury wares for the upper classes. (Jörg 2011/2, p.131)

Condition: A large "V"-shaped circular firing crack around the base, Two unglazed spots and a firing hairline to the handle, A rough spot to the tip of the spout, Some frits and chips to the rim of the cover. 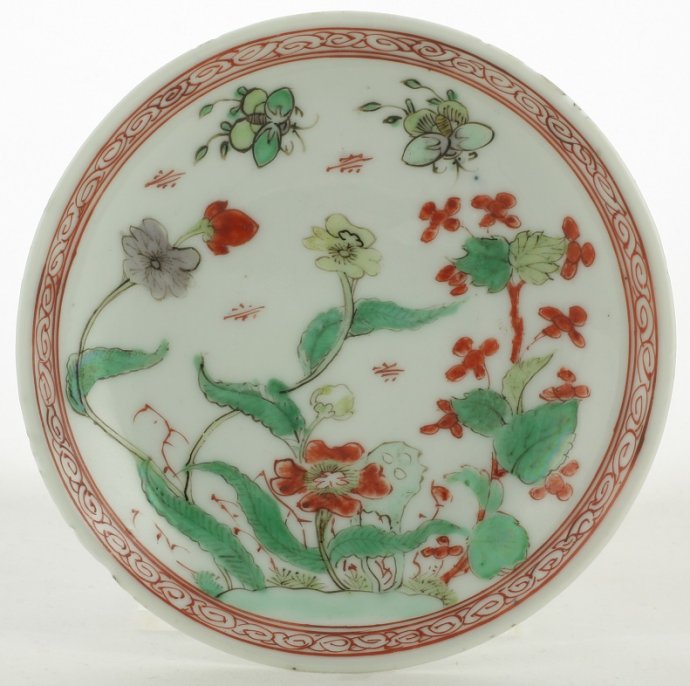 Saucer on footring, slightly everted rim. Decorated in various famille verte enamels with flowering plants growing from pierced rockwork and flying butterflies and insects, round the rim a spiral pattern border. Marked on the base with the symbol mark, Artemisia leaf, in overglaze iron-red, in a double circle in underglaze blue.

Condition: A chip to the footring and some small frits to the rim.

In the late 19th century the French art historians Albert Jacquemart and Edmond le Blant coined the term famille verte for this form of polychrome porcelain; in China it is called Kangxi wucai by analogy with wucai (five colours) ware from the Ming dynasty. The 'five' refers not to five specific colours but to 'all' colours. (Düsseldorf 2015, p,158)

Condition: The body restored after being broken in two pieces. The cover with a firing flaw and some glaze loss to the tip of the knob. 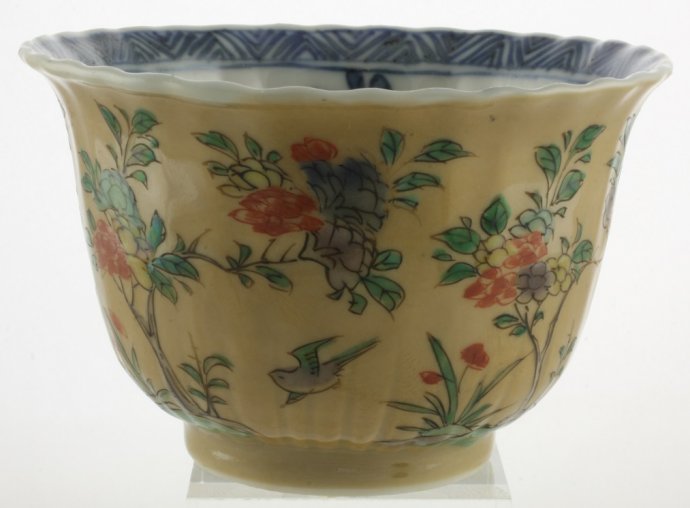 Cup on footring, slightly everted rim with a lobbed edge. Covered with a light-brown (café au lait) glaze and decorated in famille verte enamels, with black and iron-red. The interior rim, wall and bottom in underglaze blue. Decorated with four groups of wide spreading flowering plants and birds in flight in between. Round the inner rim a border of zig-zag lines and on the interior wall four peony sprays in underglaze blue. On the bottom three flowering plants with flying insects. Marked on the base with the symbol mark, "Sacred Fungus", the symbol of longevity, immortality, in a double circle in underglaze blue.

These relatively large cups could be used for tea as well as coffee. The designs are well painted with attention to detail, so these cups are a good example of the high quality tea and coffee wares decorated in famille verte colours that were ordered by the Dutch from c.1700 onwards. (Jörg & Van Campen 1997, p.172)

Condition: A firing flaw with a short connected glaze hairline to the rim and some wear to the enamel. 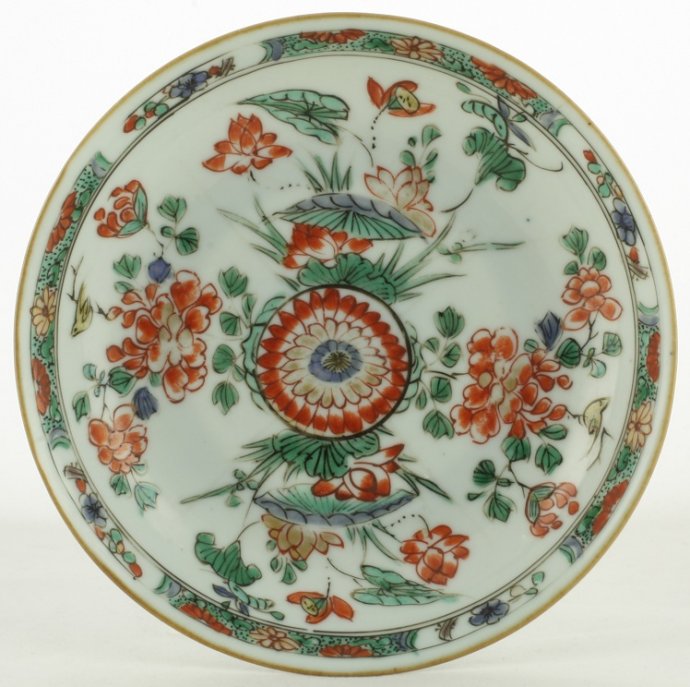 Saucer on footring, slightly everted rim. Decorated in various overglaze famille verte enamels with a central chrysanthemum flower head surrounded by four groups of flowering plants and two bird perched on branches. On the rim a border of flower heads reserved on a green-speckled ground with four reserves filled with flowering branches. The reverse is undecorated.

Condition: Two hairlines to the rim. 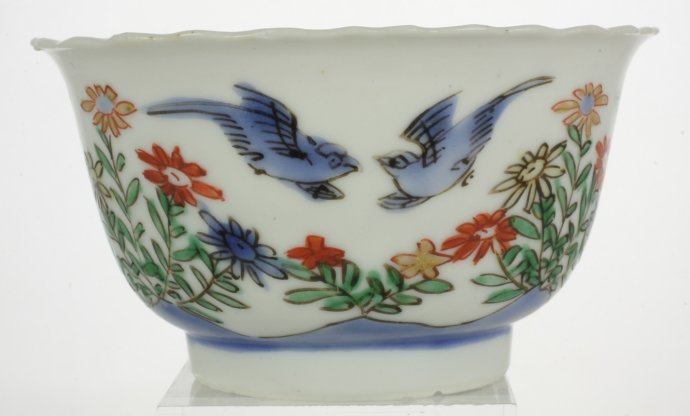 Condition: A chip to the inner footring, two tiny hairlines and two very tiny fleabites to the underside of the rim. 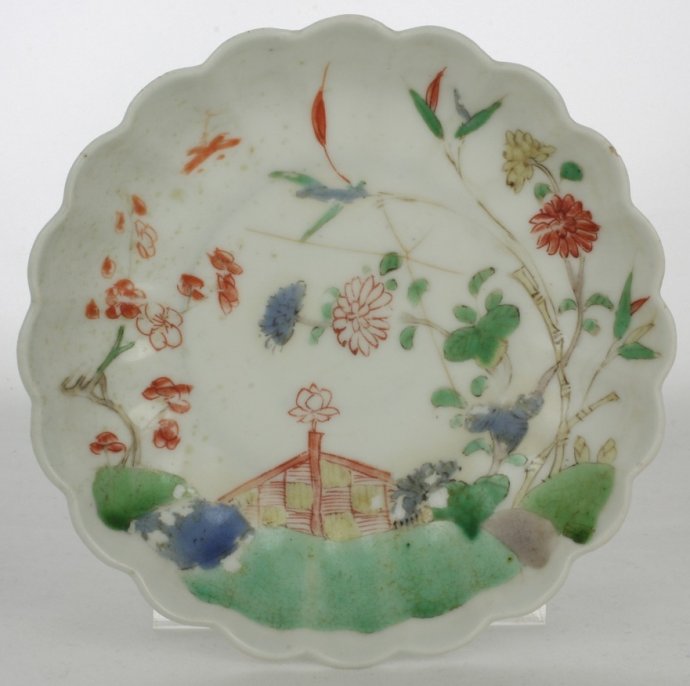 Saucer on footring, curved sides and rim with a lobbed edge. Decorated in various overglaze famille verte enamels with a lotus flower by a fence surrounded by flowering bamboo, chrysanthemum, and prunus plants with a single flying butterfly. Marked on the base with the symbol mark: Lotus, in a double circle, underglaze blue.

Condition: A frit to the rim, a X-shaped hairline to the base and wear to the enamels on various spots.