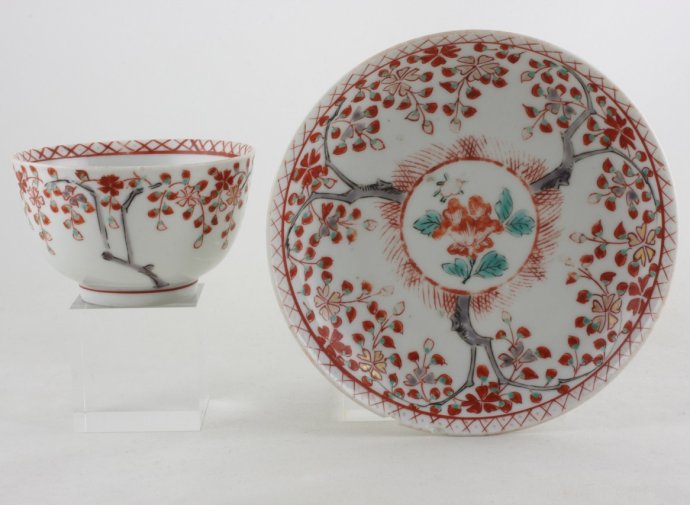 Teacup and saucer on footrings, straight rims. Decorated in iron-red, green, black and aubergine enamels and gold with a central roundel filled with a flower spray surrounded by grass motifs. On the cavetto three weeping cherry trees with dense flowers and foliage. Round the rim a border with x's. On the reverse rim a continuous floral scroll with an arrow floret on the base. The teacup is decorated en suite.

For an identically shaped, sized and decorated teacup and saucer, please see:

Teacup: A hairline and frit to the rim.

Saucers: Two chips to the rim, one with a connected hairline. 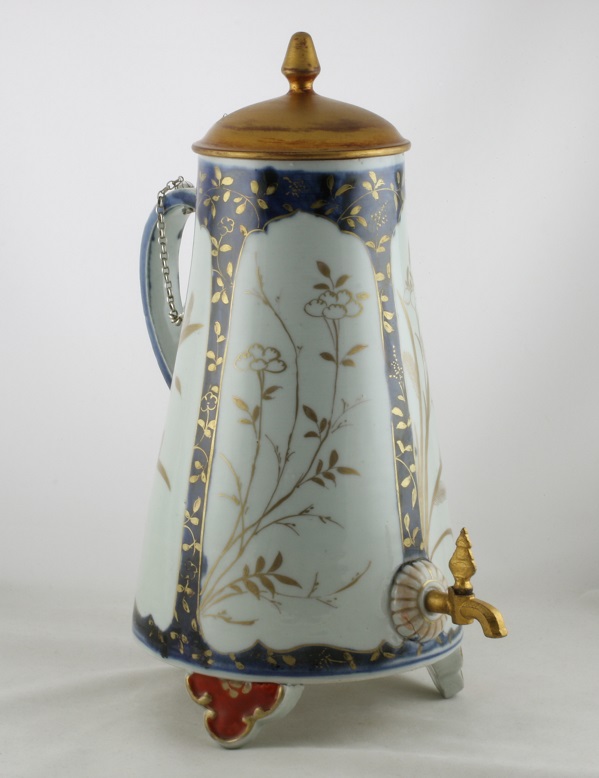 Coffee pot of conical shape on three flat modelled feet. Curved, flat pierced handle, replaced wooden domed cover with pointed knob knob with a contemporary Dutch silver chain between the top of the handle and the cover. The hole for the mounted Dutch brass tap in the lower part is surrounded by a kiku-flower modelled in low relief. Dcorated in underglaze blue, iron-red and gold with four shaped panels filled with flowering plants and grasses in gold on an underglaze blue ground with scrolling foliage in gold.

The combination of the underglaze blue and golden decoration produces a splendid decorative effect.

As was the case with tea, it was not until the end of the 17th century that drinking coffee became popular in Europe. each town had his own coffee house, where everyone - which in fact meant mainly men - could enjoy drinking a cup of coffee. The Dutch East India Company, (Vereenigde Oost-Indische Compagnie, VOC), started off mainly importing coffee from Yemen, experimenting only later with plantations of their own in Java.

However, drinking coffee had for centuries already been a common practice in the Middle East. European coffee pots were therefore often modelled after Islamic copper examples. Two types of coffee pots were most frequently commissioned in Asian porcelain: conical and belly-shaped. The conical shaped pot originally came from Japan. After brewed coffee was poured into this luxurious porcelain pot, it was held warm on a stand and subsequently served through a metal tap which had later been added to the pot after it had been imported to the Netherlands. At the bottom of the pot the coffee grounds were collected. Coffee pots from China, where both types were made, don't feature a tap but a spout. (The World at Home, exhibition Groninger Museum 17 june 2017 - 31 march 2019)

Coffee pots, usually three-legged, are common in blue-and-white and in enamelled Imari. Usually there is one hole left for a tap to be fitted in Europe, occasionally there are three. (Ayers, Impey & Mallet 1990, p.213)

For an identically decorated tea-caddy, in the collection of Oriental ceramics of the Groninger Museum, please see:

Condition: A firing tension hairline, caused by the firing process and a frit to the handle. 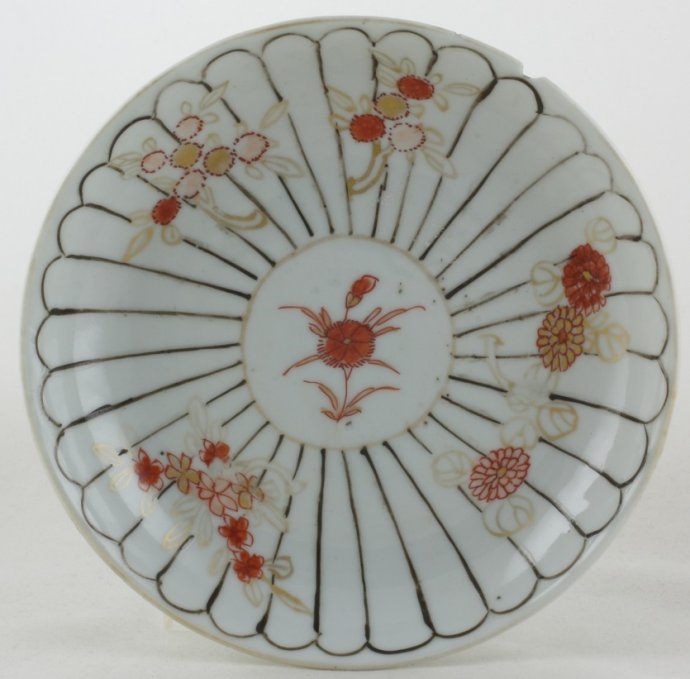 This saucer was once part of a chocolate set comprising of a saucer, a beaker and cover.

For an identically shaped, sized and decorated saucer and beaker, please see:

Condition: A frit and a chip to the rim. 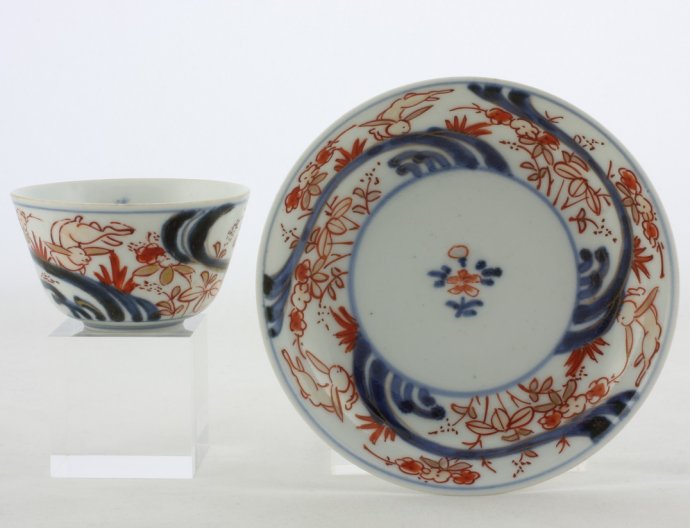 Teacup and saucer on footrings, slightly everted rims. Imari decorated in underglaze blue, iron-red, gold and a light-pinkish gold wash with flowering plants and a white hare running away from foaming waves. The teacup is decorated en suite.

The hare is associated with the moon and old age. Legends says that the doe conceives by running on the waves on the 18th day of the 8th month when the sky is clear and the moon is reflected in the water, by licking the fur of the male during the same period or simply by gazing at the moon this may explain the wavy lines on this teacup and saucer. Another version of the legend tells of a white hare on the island of Oki wanted to go to the mainland but as he could not swim, he cunningly asked a number of crocodiles to line up in the water, under the pretence of counting them to see if there were more crocodiles in the sea than hares on Oki. He had almost reached the shore by jumping across their backs, when the last crocodile saw through his deception and snapped off all his fur before the hare leapt ashore. (Arts 1983, pp.113-114), (Jörg 2003/1, pp.117-118)

Condition teacup: A tiny fleabite to the inner rim.

Condition saucer: A shallow glaze chip to the outer rim of the saucer. 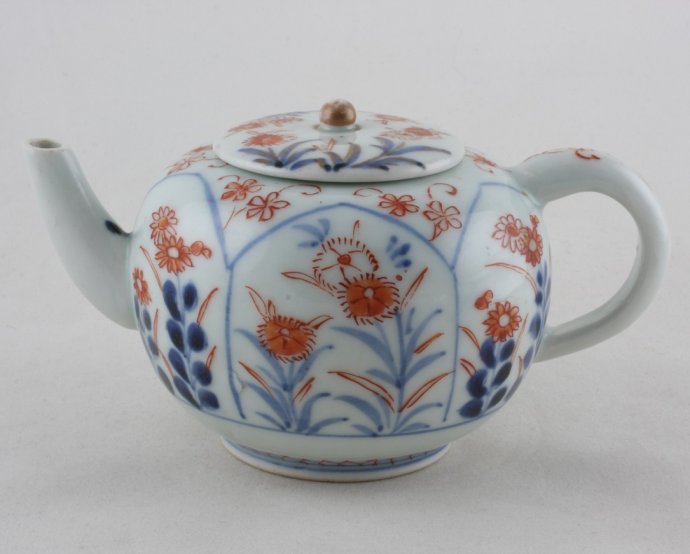 These teapots were probably made for export, although the decoration is not very European, while the spout is very blunt. Those with a more elongated or curved spout seem to be more akin to the European teapot, but their shape was probably inspired by the Chinese teapot of the 16th century, which looked like the European teapot but was much smaller. It had a handle at the side, a spout opposite to it and a lid. (Arts 1983, p.53)

The wide, overlapping cover without a flat rim, breaking the line of the curving body, is unusual.(Jörg 2003/1, p.196)

Condition: Firing flaws to the tip of the spout and cover. 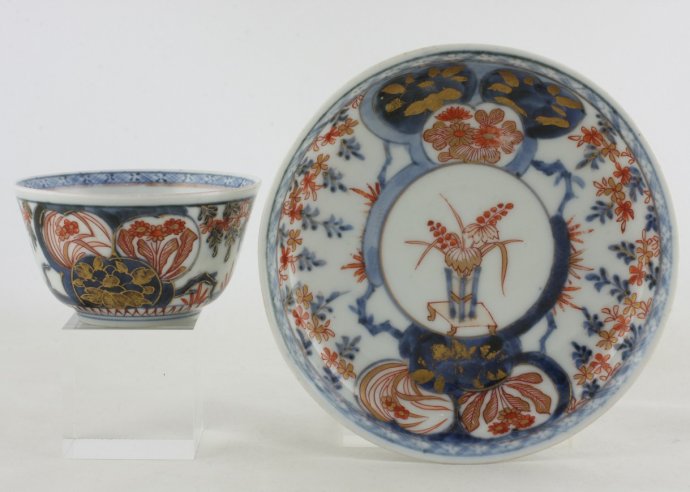 Teacup and saucer on footrings, slightly everted rims. The saucer with a spur-mark on the base. Imari decorated in underglaze blue, iron-red and gold with a vase filled with flowers on a low table in a central roundel. On the sides three kidney shaped panels, two filled with flower heads in gold on an underglaze blue ground and one with various flower heads, alternating with a wide spread flowering wisteria. Round the rim a zig-zag lines pattern border. On the reverse three flower sprays and on the base a single concentric band in underglaze blue. The teacup is decorated en suite.

The decorative style on this teacup and saucer is very similar to that used on other, earlier sold, Japanese Imari tea ware. The translucent enamel colours, the zig-zag lines-pattern borders and the reverses with the three wide spread flower sprays are all very similar. This could indicate that these may be the product of a single workshop but may or may not be the product of a single kiln, specialised in these high-quality tea wares. Judging by Dutch 18th century sales and inventories, Japanese porcelain was quite expensive at the time and even more highly valued than its Chinese counterpart. 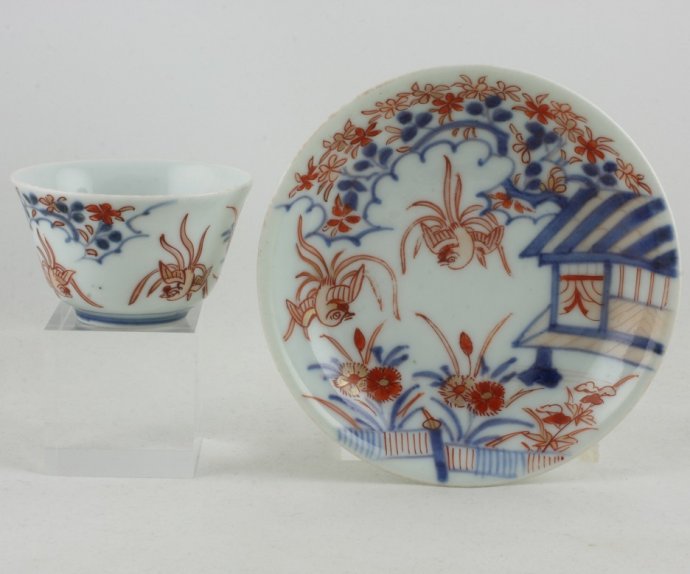 Teacup and saucer on footrings with spreading sides and rims. Imari decorated in underglaze blue with overglaze iron-red and gold with two phoenixes or pheasants in flight near a house with veranda, a flowering tree and a fence with various flowering plants. The teacup is decorated en suite with a single flower head on the base. 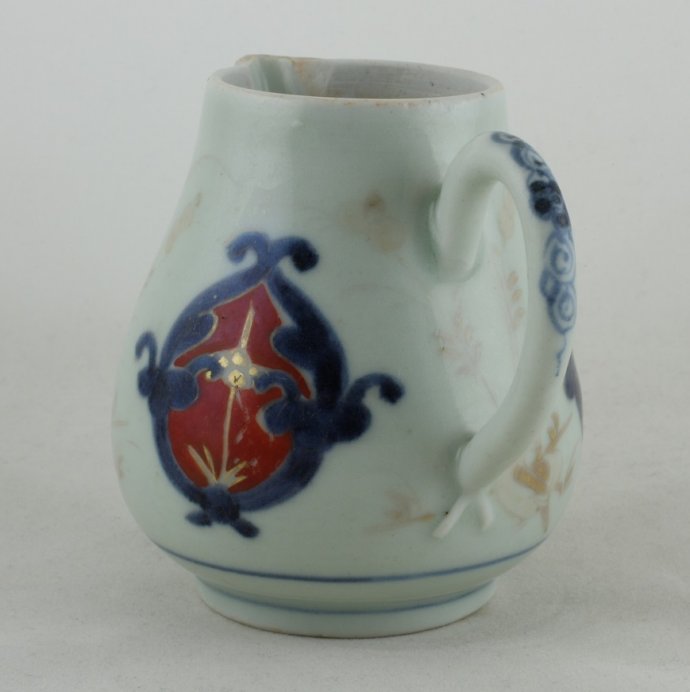 Oviform milk jug on footring, wide neck with pinched spout at the rim. Curved C-shaped handle. Rim unglazed inside for lid, now missing. Imari decorated in underglaze blue, iron-red and gold with three vertical gold sprays with pink cherries and two pink doves at foot, between each spray a floral lozenge motif in red and blue touched in gold.

Tea and or coffee sets of Japanese porcelain are extremely rare and the almost complete set in the Groninger Museum, Groningen is the only one I know of in The Netherlands. Its matching milk jug is also a rare shape in Japanese porcelain. (Jörg 2003/1, p.192)

For an identically decorated coffee pot and cup, please see:

For an identically shaped and sized milk jug, please see:

In all probability this tea caddy, coffee pot, cup and milk jug formed part of a set.

Condition: A small fleabite to the tip of the spout.