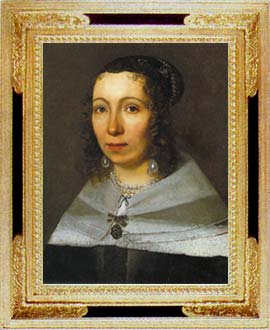 German/Dutch botanist Maria Sybille Merian (1647-1717) worked as a botanical artist. She published collections of engravings of plants in 1675, 1677 and 1680. She collected and observed live insects and created detailed drawings to illustrate insect metamorphosis. In 1699 the city of Amsterdam sponsored Merian to travel to Surinam were she made sketching of local animals and plants. In 1701 malaria forced her return to Holland, in 1705 she published a book Metamorphosis Insectorum Surinamensium about the insects of Surinam. 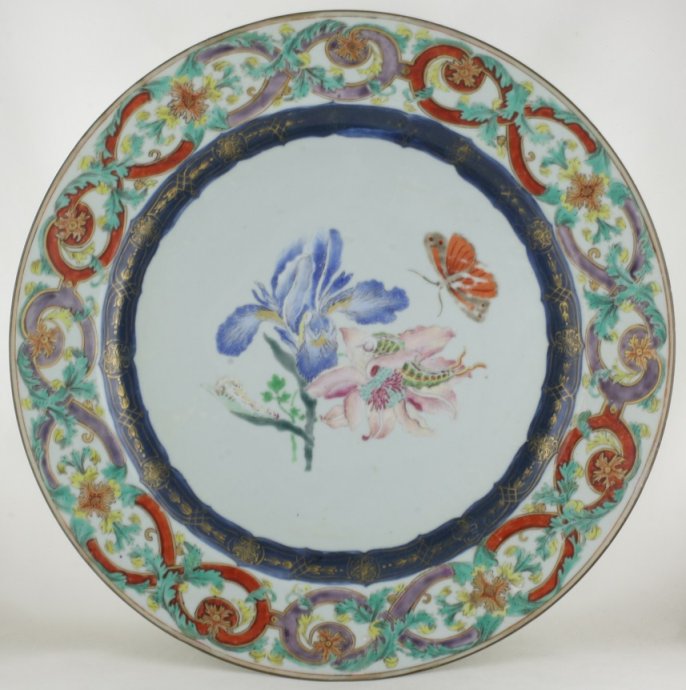 Dish on footring, flat underglaze brown-edged rim (jia mangkou). Decorated in polychrome enamels with two flowers, one an iris, the other possibly a peony variant, a butterfly and two caterpillars within an underglaze blue band with a decorative pattern in gold. On the sides intertwined floral and foliate scrolls. On the reverse peony sprays alternating with butterflies in flight.

Botanical gardens were first developed in Italy in the sixteenth century, a time of considerable interest in identifying, categorizing, and illustrating plants, primarily for use as a resource for medical studies. During the early period of international sea trade, many books and prints were published of new, exotic flora discovered by traders, and many of the plants were brought back to Europe from Pacific islands and Asia. During the eighteenth century, albums of botanicals painted by Chinese and Indian artists were created and many European gardens became primarily devoted to the display and propagation of these and other ornamental plants.

The print source from which the flowers at the center of this plate were derived is the published work of Maria Sibylla Merian (1647-1717). Born in Germany and educated in Holland, she voyaged in 1698 to Surinam, where she collected specimens and prepared illustrations first published in Holland in 1705 as Metamorphosis Insectorum Surinamensium, and in France in 1771 as Histoire Generale des insectes de Surinam et de toute l'Europe. Four separate engravings from the third volume of her Raupenbuch (Caterpilar Book), published posthumously in 1717, were used to compose the illustration on this plate (and those on a blue and white version as well). The particular caterpillar (Cerura vinula) on the anemone is from plate 39, depicted on a willow branch, with its chrysalis, in the book. Other elements of this design were derived from plates 20, 28 and 34. (Sargent 2012, p.245 & Howard & Ayers 1978, vol. 1, pp.304-305, cat. 334)

There are a number of dishes, plates and saucers with this pattern, mostly in underglaze blue, rarely in polychrome enamels. (Jörg & Van Campen 1997, p.287, cat. 334)

Painted to special order during the same period as pieces designed by Cornelis Pronk. Almost certainly for the Dutch Market. (Howard 1994, p.78, plate 60)

For an identically in "Merian-style" decorated dish, please see: 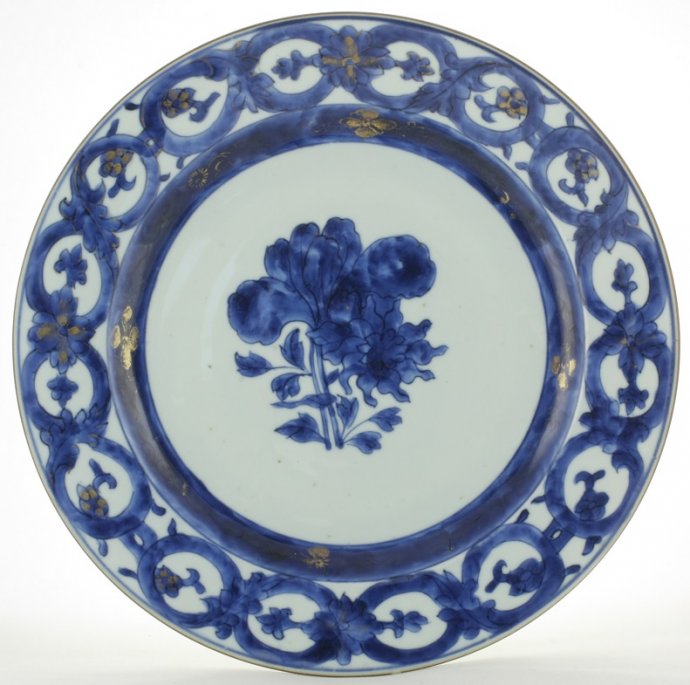 Dish on footring, flat underglaze brown-edged rim (jia mangkou). Decorated in underglaze blue and gold with two flowers, one iris the other possibly a peony variant encircled by a decorative border in underglaze blue with flower heads in gold. On the sides and rim intertwined floral and foliate scrolls.

German/Dutch botanist Maria Sybille Merian (1647-1717), described the insects of the West Indies, Surinam in particular. For the central decoration on this specific dish, no matching print of her has been found. The intertwined floral and foliate scrolls decoration on the sides make that this dish can be categorised as a "Merian-style" dish.

Sargent states that with regard to the polychrome enamel "Merian" dishes, four separate engravings from the third volume of Maria Sybille Merian's Raupenbuch (Caterpillar Book), published posthumously by her daughter in 1717, were used to compose the illustration on this plate and those in blue and white as well. (Sargent 2012, p.245)

For an identically in "Merian-style" decorated dish, please see: