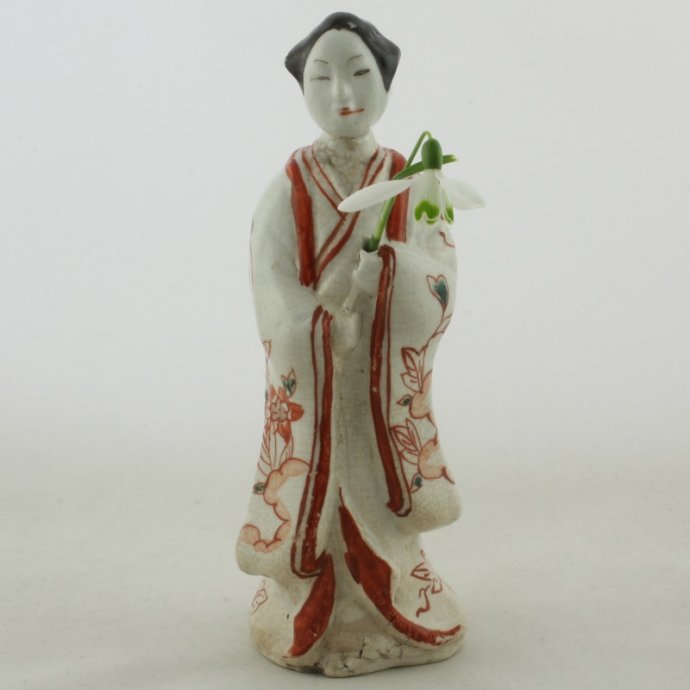 Figure of a woman

Small figure of a standing woman (a bijin, or 'beautiful woman') dressed in a kimono. The base is unglazed. A small firing hole next to her left hand. Imari decorated in iron-red and black and green enamel, with peony flower sprays and flowering peony plants.

Apparently, porcelain figures of humans and animals were a successful export item. The Dutch ordered figures from the very start of the Japanese porcelain trade making use of an already existing market for such figures. The origin of the shapes of the models is still a puzzle, although it seems logical that the Japanese potters used Japanese sources when making the moulds, perhaps referring to the indigenous doll tradition, to prints or to carved figures. These 'exotic' figures played their part in the export assortment, and were either bought by the Dutch East India Company, (Vereenigde Oost-Indische Compagnie (VOC)), privately by Dutch merchants, or by the Chinese. Three main groups of figures can be discerned: figures in the Kakiemon palette, Imari figures and figures after European models. Enamelled figures come in many shapes and varieties and were included in the export assortment from the beginning of the Dutch porcelain trade.

Figures decorated in Imari style occur more often in Dutch collections. A main group of Imari figures consists of standing figures of men and woman. Their garments are enamelled in a limited range of colours: brown, black, red, aubergine and some green. Gold is used sparingly to accentuate details. The painting is less rich and exuberant compared to Kakiemon figures, although sometimes the quality comes close. Such figures are often called 'actors', but it is uncertain who they actually represent. If so, the question of whether they were made after existing models or were 'invented' especially for the export market remains to be answered. Although not common, they are not particularly rare either, and they must have been appreciated as representations of the exotic East in Western interiors. It is likely they competed with the large Chinese blanc de chine figures, which is perhaps why such blank Dehua figures were often over-painted in The Netherlands in red, black, yellow or green to better resemble the fashionable Imari figures.

In the Netherlands, such figures were traditionally found in collections in Groningen and Friesland. The function of these figures is unclear. They were probably considered as exotic, decorative items in the West, and must have reminded people of the Chinese 'Long Elizas' so often depicted on Kangxi export porcelain. The first shipment to The Netherlands in 1659 already included '100 various dolls', but it is not known what these figures looked like, and they were probably quite small, as the whole batch was only valued at 5 tael. In 1665, 310 beeltjens (small statuettes) are recorded and these costs even less: tael 9:3. They are mentioned again in later years, and most surviving figures will have been bought privately.

Eighteenth-century European imitations of Japanese figures are rare. The French Chantilly factory is renowned for its soft-paste porcelain copies of Kakiemon wares. More varied are the notorious Samson examples, made in Paris in the late 19th century and perhaps even in the early 20th century, when interest in Japanese figures became widespread among collectors of Oriental porcelain. Given their exclusivity it is remarkable that Japanese figures were not as widely copied in 18th-century European ceramics as, for instance, the blanc de chine figures of Guanyin. In fact, they are conspicuous by their absence, even in Dutch Delftware. Of the standing 'actor' figures, which are an obvious choice to imitate, only one small (French?) faience copy in the Museum Sypestein in Loosdrecht is known thus far.

For a similarly shaped, sized and decorated figure of a woman, please see:

For another Japanese figure (whistle) modelled as a reclining boy and decorated in Kakiemon-type enamels, please see:

Condition: Some firing flaws to the base, a missing piece of hair and a chip to the base. The head has been re-stuck to the body.