Famille Verte for the Chinese, Literary and other Sources 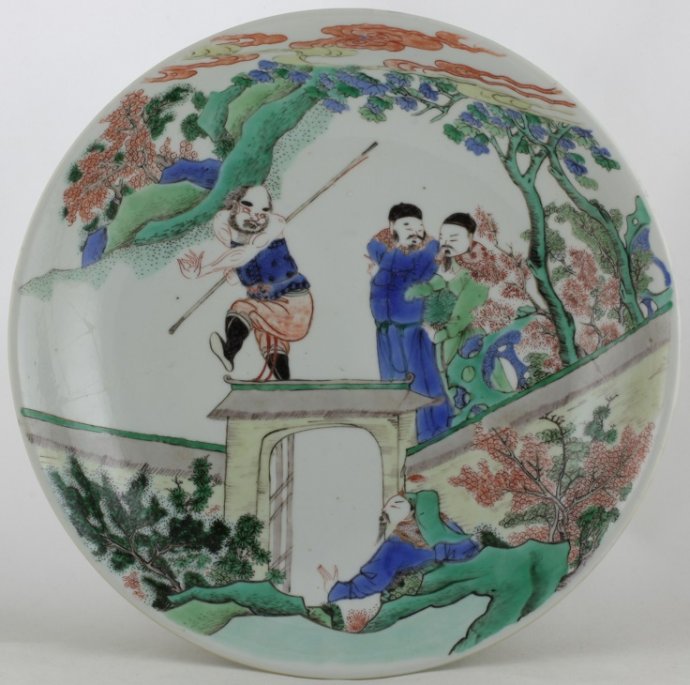 Dish on footring with spreading sides and a flaring rim. Decorated in famille verte enamels including overglaze blue with a scene from the famous Chinese novel 'Romance of the Three Kingdoms'. It shows four men in a mountain landscape with a variety of trees, three standing on the inside of a wall, one is resting against a rock on the other side near a gate in the wall. On the reverse three flowering peony sprays. Marked on the base with the symbol mark: Ding incense burner, in a double circle, underglaze blue.

This dish is interesting in that its decoration includes overglaze blue, which was supposedly developed by the Chinese porcelain industry around 1685-90.(Jörg 2011/2, p.70, cat. 72)

The novel 'The Romance of the Three Kingdoms,’ or Sanguozhi Yanyi (三國演義)' describes exciting stories around the late Eastern Han (25-220 AD) and the early Three Kingdoms period (220-265 AD). However it was written in the late 15th century and believed to be enhanced all the way towards Ming. The Romance of the Three Kingdoms is acclaimed as one of the Four Great Classical Novels of Chinese literature; it has a total of 800,000 words and nearly a thousand dramatic characters (mostly historical) in 120 chapters. The novel is among the most beloved works of literature in East Asia and its literary influence in the region has been compared to that of the works of Shakespeare on English literature. It is arguably the most widely read historical novel in late imperial and modern China.

The novel includes personal and military battles, power struggles, intrigues  and more importantly, the human faces of many characters.  Different scenes and episodes from this famous novel appear frequently on Chinese porcelain.  Among many important characters, a major part of the book talks about the tales of the three sworn brothers: Liu Bei (劉備), Guan Yu (關羽) and Zhang Fei (張飛), while Zhuge Liang (諸葛亮) joined them later.

Liu Bei was a warlord at the end of the Han dynasty and founder of the Han kingdom of Shu (c.200-263). Generals Zhang Fei and Guan Yu, who were among the earliest to join Liu Bei, shared a brotherly relationship with their lord and accompanied him on most of his early exploits. Liu Bei succeeded in recruiting Zhuge Liang in 207 after paying three personal visits. Zhuge Liang left his residence to follow Liu. He later was a chancellor (or prime minister) of the state of Shu Han during the Three Kingdoms period. He is recognised as the most accomplished strategist of his era, and has been compared to Sun Tzu, the author of The Art of War.

With this in mind, a scene from the Three Kingdoms novel with these four men can be represented here. The characters displayed on this dish would than probably be:

Zhang Fei (張飛) on the top left hand side.

Zhuge Liang is pointing towards  Zhang Fei with a smile of appreciation while giving Liu Bei  who is playing with his beard, a satisfactory look. So Zhang Fei must have done something great (e.g. winning a battle). There are two episodes believed to be about The Battle of Changban and The Battle of Baxi in which Zhang Fei sole work was commendable, which  could have been used as the source of inspiration for this decoration.

(I am indebted to Mr. S. Fan for the information above)

Figural scenes obviously had a different meaning and importance for the Chinese than they did for Western buyers, but pieces with these decorations could be marketed to both groups. The Chinese appreciated the symbolic auspicious symbolism and the literary connotations while Westerns found the exoticism of the decoration appealing. (Jörg 2011/2, p.73)