Sold Chinese Porcelain from the Collection of

King of Poland and Elector of Saxony,

Friedrich August, Frederick Augustus I of Saxony (born on 12 May 1670 in Dresden - died 1 February 1733 in Warsaw) encountered a general enthusiasm for East Asia following the fashion for all things Chinese at other European courts during his Grand Tour, a custom for European princes, to become familiar with the standards of European court life. This enthusiasm was apparently the decisive factor in awakening his passion for porcelain, a precious and exotic luxury product, which finally infected him with the 'maladie de porcelaine'. It was not Augustus who was intended to be the future ruler of Saxony, but his elder brother, Johann Georg. However, in 1694 this brother died unexpectedly and Friedrich August I became Elector of Saxony. To be a ruler of European importance Augustus desperately needed to become a king. In 1696 the Polish king had died, and, because Polish kings were elected by an assembly of the Polish aristocracy, Augustus converted to Catholicism and applied for the crown of Poland. A lot of diplomatic activities were carried out, and a lot of money was spent on Polish noble families to make them to vote in favour of the Saxon elector. Augustus succeeded in his ambition and in 1697 was crowned Augustus II in Warsaw: not King of Poland, but King in Poland - he was generally known as Augustus the Strong - this finally created the prerequisite for his desire to use porcelain as an exotic work of art of the highest order in the representation of his royal splendour and as a demonstration of his power. The large scale purchases (mostly the best and most expensive of what was on the market in Amsterdam and Leipzig) of porcelain consonant with the activities of a collector followed between 1716 and 1718. The legendary exchange of gifts between Friedrich Wilhelm I and Augustus II in which 600 Saxon soldiers were traded for 152 blue enamel pieces of Chinese porcelain from Oranienburg and Charlottenburg is also to be seen in this context. In 1717 Augustus the Strong bought the so-called Holländisches Palais in Dresden, the use of 'Dutch' in the name of this palace does not only refer to the former owner of the palace, the Dutch ambassador, but was intended to refer to the function of the palace as a porcelain palace, the Dutch being synonymous with collecting and displaying porcelain. His precious porcelain was moved to this summer palace. In 1727 Augustus the Strong, began to convert the Holländisches Palais  into a gigantic 'porcelain palace' with four wings referred to as the 'Japanisches Palais'. In it oriental porcelain, Meissen porcelain and life size sculptures in porcelain of the animals of Augustus the Strong, were displayed. Augustus the Strong's dream of a magnificent porcelain palace did not die with him. His son August III genuinely attempted to complete the building and its fittings. The demise of absolutism finally imposed considerable restrictions on the excessive entertainments and hectic building activity of the court. An obvious lack of money prevented the continuation of the furnishing of the interiors of the Japanische Palais. Thus the ambitious project of the unique dream palace of the elector-king with the largest and most important porcelain collection in Europe gradually fell into oblivion. In 1763 when August III died, the porcelain was banished to the basement and subsequently innumerable so-called doublets were sold. In 1876 the porcelain collection was given a new home in the former royal picture gallery, the Johanneum. The porcelain which was evacuated in 1942 because of the risk of bomb raids in Dresden, largely survived the Second World War undamaged, but most of it was then transported to the Soviet Union as spoils of war and only returned to Dresden in 1958. In 1962 the newly designed collection was opened in the rebuilt Zwinger Palace Museum. (Ströber 2005, pp.48-57), (Pietsch, Loesch & Ströber 2006, pp.5-10 )

The most ambitious project along these lines was never completed: the Japanese Palace at Dresden which Augustus the Strong, Elector of Saxony and King of Poland, planned to decorate, room by room, exclusively with porcelain. Nevertheless, Augustus' great career as connoisseur and collector sums up all the contemporary European interest in the porcelain of China. Porcelain was his consuming passion, and he had the money and power to let his passion rule him. There has never, even in modern times, been a collector of Oriental wares who could vie with him. Augustus owned literally thousands of pieces. Yet in the story of porcelain Augustus has still a greater claim to fame. It was he who ordered the alchemist Johann Friedrich Böttger to turn his talents from a search for gold by the process of transmutation to a search for the secret of porcelain manufacture. Marvellously enough, Böttger succeeded. Thereafter Augustus could have his own porcelain- the very first hard-paste or true porcelain to be produced in the West- as well as his Chinese pieces, The factory at Meissen, near Dresden, where he established Böttger in 1710, was to prove to be the most brilliant in Europe, unequalled by the many factories that in the course of the century rose in imitation of it. (Goldsmith Phillips 1956, pp.48-50)

A special feature of the Dresden Porcelain Collection is comprised by the surviving  eighteenth century inventories. The first inventory from the year 1721 (Inventarium über das Palais zu Alt-Dresden), mentioned  above lists both the porcelain displayed at the Japanese Palace and the acquisitions till 1727. The porcelain was allocated to different groups, given a number and described briefly, giving measurements. The number was incised or painted on the bottom of the object. In order to distinguish the different groups a 'signum', or symbol, was added to the number. (Japanese porcelain had the signum of a cross). Besides information of the individual pieces, we find in the inventory remarks regarding circumstances of acquisitions ad losses. Only a few pieces were added after his death in 1733 and in fact it became a 'closed' collection. (Ströber 2005, pp.48-57), (Jörg 2011/2, p.52)

Prince Elector Friedrich Augustus I, later King Augustus II (1670-1733), also known as Augustus the Strong, King of Poland and Elector of Saxony, shared the passion for Chinese and Japanese porcelain held by his father, Prince Elector Johann Georg IV (1669-1694). The extensive sums of money they spent on collecting this art, brought the scientist Ehrenfried Walther von Tschirnhaus (1651-1708) to refer to the Chinese as 'Saxony's porcelain bloodsuckers'. August II, King of Poland, acknowledged his addiction in a letter to Count Jacob Heinrich von Flemming (1667-1728), the king's Prime Minister and one of the most influential persons at the Dresden court, writing: 'Do you not know that it is the same with the oranges as with porcelain? Namely, that those who have one sickness or the other never believe that they have enough but always feel that they need to have more?'. (Sargent 2012, pp.120-121 & pp.186-187)

From the second half of the seventeenth century the most important cargoes were tea and gold, but increasingly porcelain was seen as a useful and decorative cargo for the new drink of tea tasted at its best from Chinaware, while the garnitures were particularly decorative on great fireplaces such as those at Hampton Court and Burghley and other great houses in England, while on the Continent, Augustus King of Saxony collected it for his mirrored halls and as inspiration for the porcelain factory he supported at Meissen. (Howard 1994, p.15) 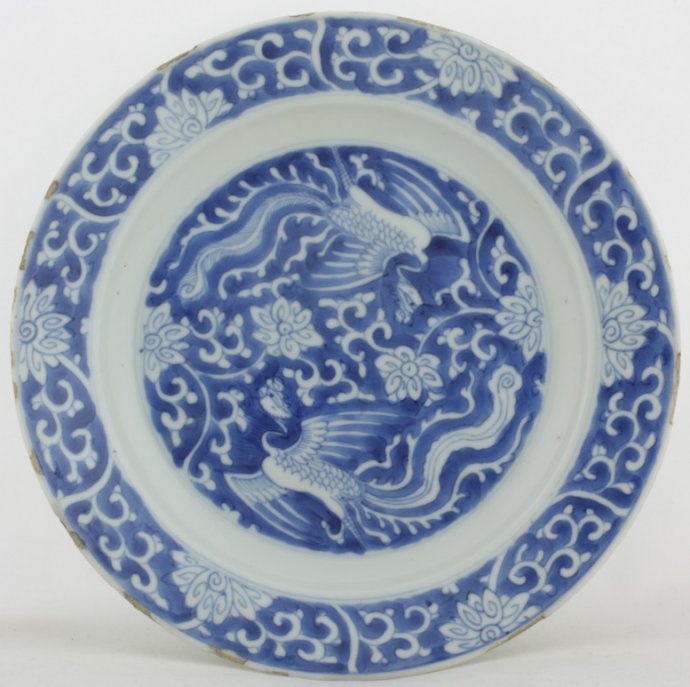 Provenance: Formerly part of the Dresden collection formed by Friedrich August or August the Strong, Elector of Saxony and King of Poland and inventoried between 1721 and 1735 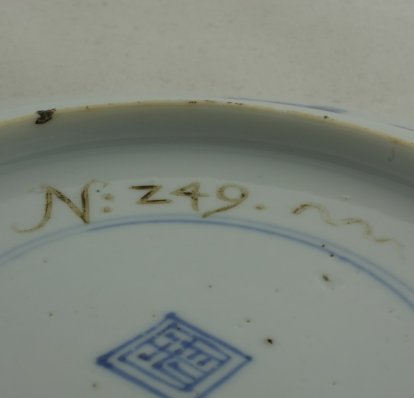 The incised number identifies dishes like these as part of the collection of Friedrich August I, The Strong, Elector of Saxony later August II, King of Poland, which he amassed in Dresden. Only a few pieces were added after his death in 1733 and in fact it became a 'closed' collection. (Jörg 2011/2, p.52)

A special feature of the Dresden Porcelain Collection is comprised by the surviving  eighteenth century inventories. The first inventory from the year 1721 (Inventarium über das Palais zu Alt-Dresden), mentioned  above lists both the porcelain displayed at the Japanese Palace and the acquisitions till 1727. The porcelain was allocated to different groups, given a number and described briefly, giving measurements. The number was incised or painted on the bottom of the object. In order to distinguish the different groups a 'signum', or symbol, was added to the number. (Japanese porcelain had the signum of a cross). Besides information of the individual pieces, we find in the inventory remarks regarding circumstances of acquisitions ad losses. (Ströber 2005, pp.48-57)

Condition: Extensive glaze fritting and three chips, one with a short connected hairline, to the rim.