The knowledge and expertise required to make porcelain was already present in Japan as far back as the early 17th century. According to legend a Korean potter discovered clay suitable for making porcelain near Arita on the island of Kyushu in the south of Japan in around 1605. Porcelain made from this clay, called shoki-Imari, was intended for the foreign market and soon acquired a surprisingly characteristic Japanese style of decoration, first with a blue underglaze decoration and later in enamel colours. The experience of the manufacturers with enamel colours turned out to be of great importance later. (source: Groninger Museum, Groningen)

When Japanese potters started to make porcelain. It was inspired by underglaze blue porcelain manufactured in kilns of Southern China. By the mid-17th century, Chinese porcelain went into decline due to social unrest and accompanying dynastic change. Dutch merchants, from their base on the small island of Deshima, near Nagasaki, were permitted to trade with Japan. Responding to European demand, the Dutch encouraged the fledgling Japanese porcelain industry to fill the gap left by China.

The porcelain the Dutch brought to Europe in the 17th century was in most cases consciously designed to cater to western tastes. To ensure that they would find a ready market, the Dutch often made wooden or earthenware models of designs and sent those to Japan to be copied.

Flasks, ewers and large dishes are examples for shapes made for the Dutch. They are painted in underglaze blue or a palette of enamels dominated by red, green and blue with flowers, figures and landscapes which would not follow traditional Japanese aesthetics. Vessels with landscape designs are often inspired by 17th century Chinese Transitional style. Plates decorated with designs organized by panels imitate the successful blue-and-white Chinese Kraak ware. To make these export wares even more attractive for the Dutch clients numbers of early Japanese export wares are painted with a stylized tulip, referring to the tulipomania, the great Dutch craze of the 1630s. (source: Keramiek Museum Princessehof, Leeuwarden) 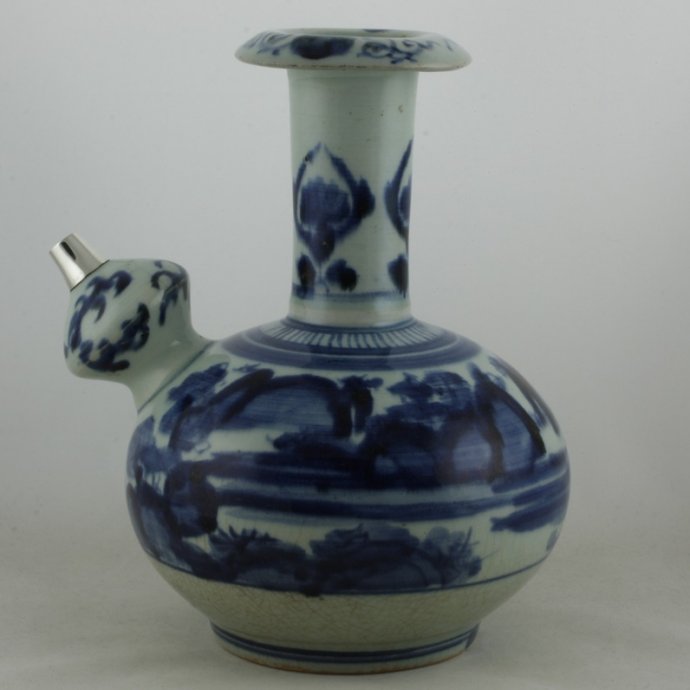 Kendi on footring, spout, fitted with a silver mount (unmarked), on the shoulder, long cylindrical neck ending in a splayed mouth with overturned rim. Decorated in underglaze blue with a simplified, rather sketchily painted, river scene with a bridge, a small pavilion on a shore with trees, rocks and mountains in the background. Round the shoulder a band with stripes and two broad monochrome underglaze blue bands. On the neck a simplified 'tulip' design, on the rim a floret between scrolls and on the spout floral sprays.

The tulip motif is reminiscent of Chinese Transitional designs, but the sketchily rendered river scene and the floret between scrolls are part of the established repertoire of Japanese designs.

Jörg states that the kendi is a drinking and pouring vessel widely used in Asia. Its basic shape is a bulbous body, a long neck and a tubular or breast-shaped (mammiform) spout on the shoulder. The kendi has no handle and one holds it by the neck and drinks from the spout. The kendi seems to have evolved from the Indian kundika and spread throughout Asia, changing shape and adapting to existing local vessels for similar use. Kendis of Chinese kraak porcelain of the first half of the 17th century and Japanese kendis of the second half were part of the Dutch East India Company's (VOC) porcelain assortment for the inter-Asian trade. Apparently, they also reached The Netherlands in small quantities, probably as part of the belongings of retiring VOC employees. They were not used according to their traditional function in The Netherlands and must only have been decorative items or were filled with flowers as shown on paintings. Kendis were not used in Japan (or China) and were made exclusively for export in Arita from the 1660s. Kendis usually have a smooth body, but Japanese potters frequently made a variety that is vertically ribbed by moulding the piece. Another characteristic of Japanese kendis is the broad overturned mouthrim, seen less often in Chinese pieces.

Arts states that the gorgelet (Portuguese: gorgoletta) or ghendi of the Japanese was originally a drinking vessel in general use everywhere in Asian countries. The porcelain form originated during the Ming period probably from a far older earthenware prototype. Later on, after the habit of tobacco-smoking appeared in Asia at the beginning of the 17th century, it was also used as a nargileh base in many Mohammadan countries. The VOC registers indicate that ghendi were made by the Japanese more or less from the beginning, as an imitation of the Chinese examples. In 1669 Bengal ordered from Deshima twenty large and small ghendi. The biggest market was Southeast Asia. In 1671 Chinese junks carried a consignment of 700 Japanese-made ghendi from Deshima to Batavia and another six hundred in the following year. 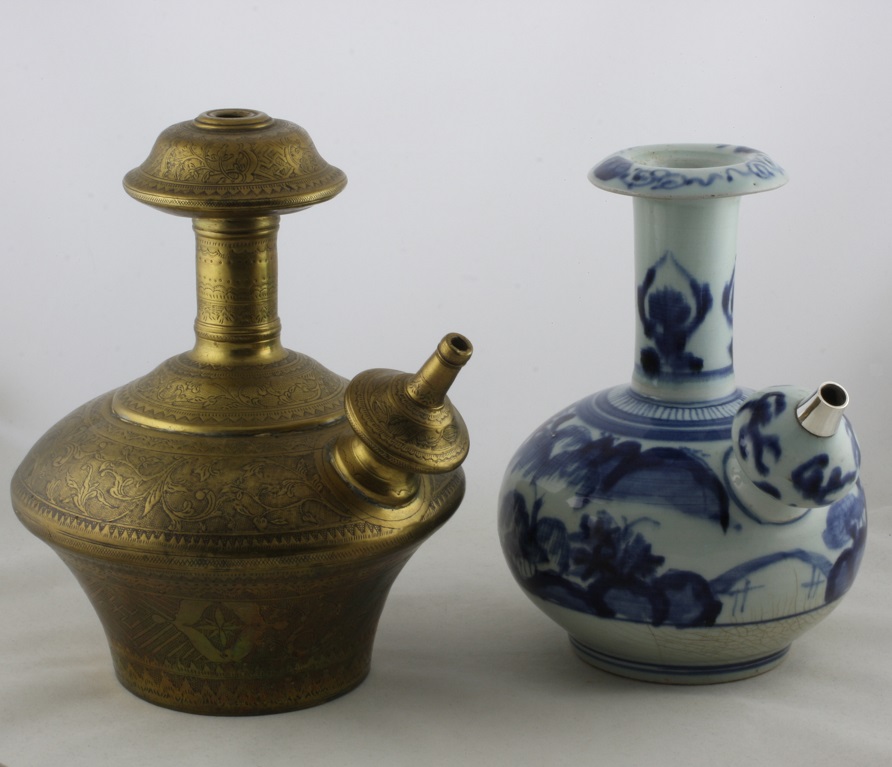 Comparison between object 2012166 and a similar model made of copper. (the coper model is not included in this sale/offer)

Condition: Crazing to the glaze of the lower part of the kendi with three firing tension hairlines. 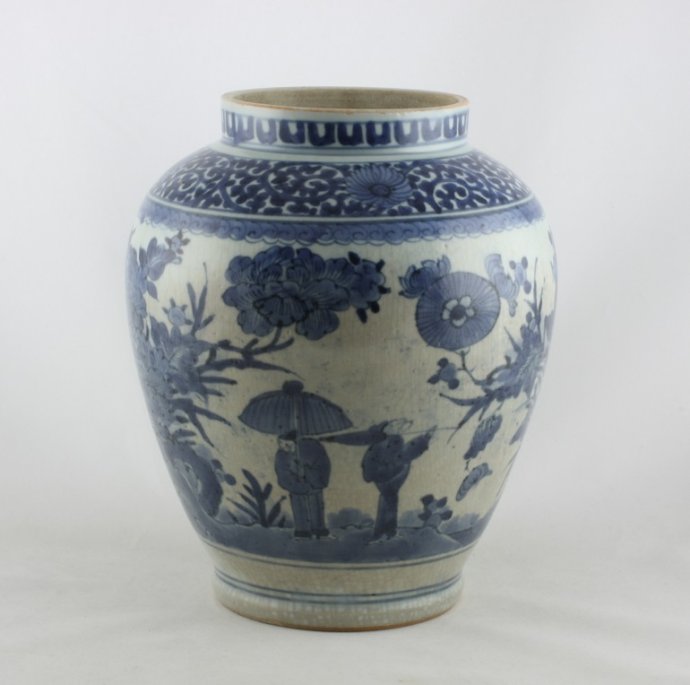 Small ovoid jar on footring, short neck with a wide slightly spreading mouthrim. The base is partially unglazed. The original cover is missing. Decorated in underglaze blue with a continuous garden scene showing two figures, one holding a parasol, in a garden landscape with various flowering plants growing from rockwork. On the shoulder a border with four flowerheads on a karakusa scroll ground. Around the neck a band of lappets.

Garnitures are sets of (usually) three covered oviform-shaped jars and two cylindrical beaker vases with spreading mouths. They were very popular in the Netherlands and elsewhere in Europe, where they were used as decorative items in the interior. Large garnitures could only be afforded by the nobility and well to do who displayed them in the representative rooms and galleries of their palaces and country houses. They were often placed on specially made pedestals or were mounted and functioned as exotic eyecatchers. Placed inside the fireplace they hid the blackened wall from view in summer and filled with sand, these jars were used as extinguishers near fire-places. (Hartog 1990, p.130, cat 158) Smaller garnitures were placed on a table, a comptoir (a small cabinet with drawers), or on the mantelshelf, but their most natural place was on the top of a porcelain cabinet. The origin of the five-piece set has not been established yet but it seems logical to look to China, which influenced Japanese export wares in so many ways. Transitional pieces, including large covered jars with an enamelled decoration, reached The Netherlands in the 1640s, and clearly had a decorative function in the Dutch Interior. When Chinese production waned, the Japanese took over and from the late 17th century started to make similar jars and beakers in underglaze blue to order for the Dutch. Then, suddenly, they were no longer single objects but parts of five-piece sets. Large scale porcelain production for export was resumed in China in the early 1680s and many new shapes emerged. Apparently, the garniture set was among them. What exactly triggered the change from the single vase or beaker to a set is not known. Japanese covered jars decorated in underglaze blue usually show Chinese elements such as phoenixes, large flowering plants, rocks, and sometimes figures in a landscape setting. Most jars are globular or oviform. They reflect the relatively rare hexagonal and octagonal Chinese pieces, in particular the Transitional jars of the 1640's. The Chinese had stopped producing polygonal jars in the middle of the 17th century. This Japanese preference for any-sided pieces is also apparent in the shape of dishes, saucers and bowls made for export from the late 17th century onwards. Covers of jars are domed and often quite high. The knobs are large and either flattened, round or pear-shaped and rarely facetted. It is interesting to note that the decoration on the Arita pieces does not imitate some of the specific Chinese Kangxi patterns, such as the characteristic division in bands of panels but show two or three wide panels filled with motifs taken from nature or a free-flowing composition all over the surface. Complete blue-and-white garnitures are extremely rare nowadays, and most existing single vases or jars might in fact have been part of such a set. When the five-piece sets became popular, the blue-and-white pieces were largely replaced by their polychrome (Imari) counterparts. (Jörg 2003/1, pp.259-260)