Miniature mustard pot of baluster shape moulded as an opening lotus flower, on a ribbed conical stem. Curved C-shaped handle. Fitted with a contemporary unmarked Dutch silver cover identically shaped and sized as the original cover which is missing. Imari, decorated in overglaze iron-red, green, aubergine enamels and gold with two ranks of moulded lotus petals in low relief, filled with carnation and prunus sprays. Round the mouthrim a scrollwork border and on the splayed foot a zig-zag lines pattern border. Round the foot a petal-pattern border and on the handle a floret between scrolls.

Porcelain miniatures were popular in The Netherlands, where they were used to furnish doll's houses, which were not children's playthings but professionally furnished replicas of townhouses. Poppegoet is mentioned in the VOC orders of 1662, this was probably just a name for small objects made of porcelain and not specifically for doll's houses.

In general, miniatures were included in groups of decorative porcelain placed on shelves, brackets and consoles in the Dutch interior, or in the porcelain rooms of the grand houses, such as those still in Pommersfelden and Charlottenburg. Germany. Similar miniature objects were also made of silver and glass, and the pieces of Japanese (and Chinese) porcelain fit into the general trend. (Jörg 2003/1, p.190) 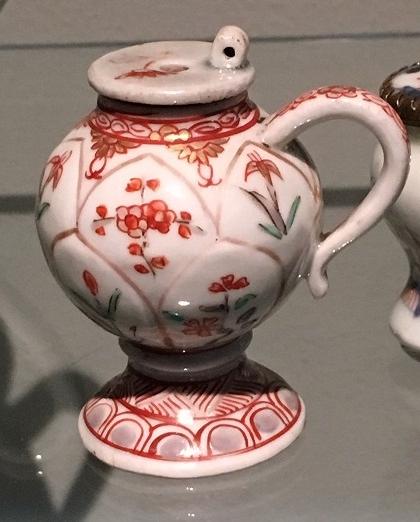 An identically shaped, sized and decorated miniature mustard pot with its original cover, currently on display in the Groninger Museum at the exhibition. The world at home. Asian Porcelain and Dutch pottery, the exibition is being held until March 10, 2019. 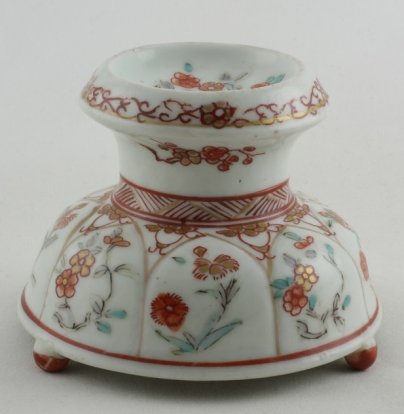 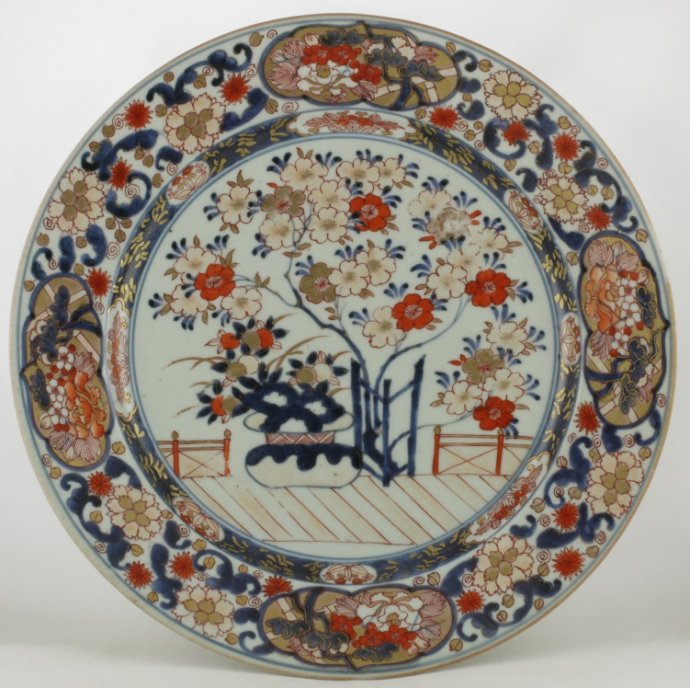 Dish on footring, spreading flat rim. The glaze heavily crackled. On the base three spur-marks in a V-pattern. Imari, decorated in underglaze blue, iron-red and gold with a large flowering cherry tree growing from behind a fenced terrace on which a jardinière filled with flowering plants. On the sides, a blue ground, leafy scrolls in gold and eight panels, four large and four small, filled with flowering plants. On the rim four reserved panels filled with flowering peony, prunus, pine and bamboo alternating with leafy scrolls and chrysanthemums and peony flower heads. On the reverse three sprays of iris and prunus blossom. The dish stands crooked due to the firing process.

Condition: Some wear to the decoration and fine crackled glaze.

Bowl on footring, narrow spreading rim, domed cover with ring knob. Imari, decorated in underglaze blue, iron-red, green, aubergine and black enamel and gold with three groups of pine and blossoming prunus trees. Near the footring a band with a continuous flowering scroll. Inside the bowl and cover tree scattered flower heads. The cover is decorated en suite. 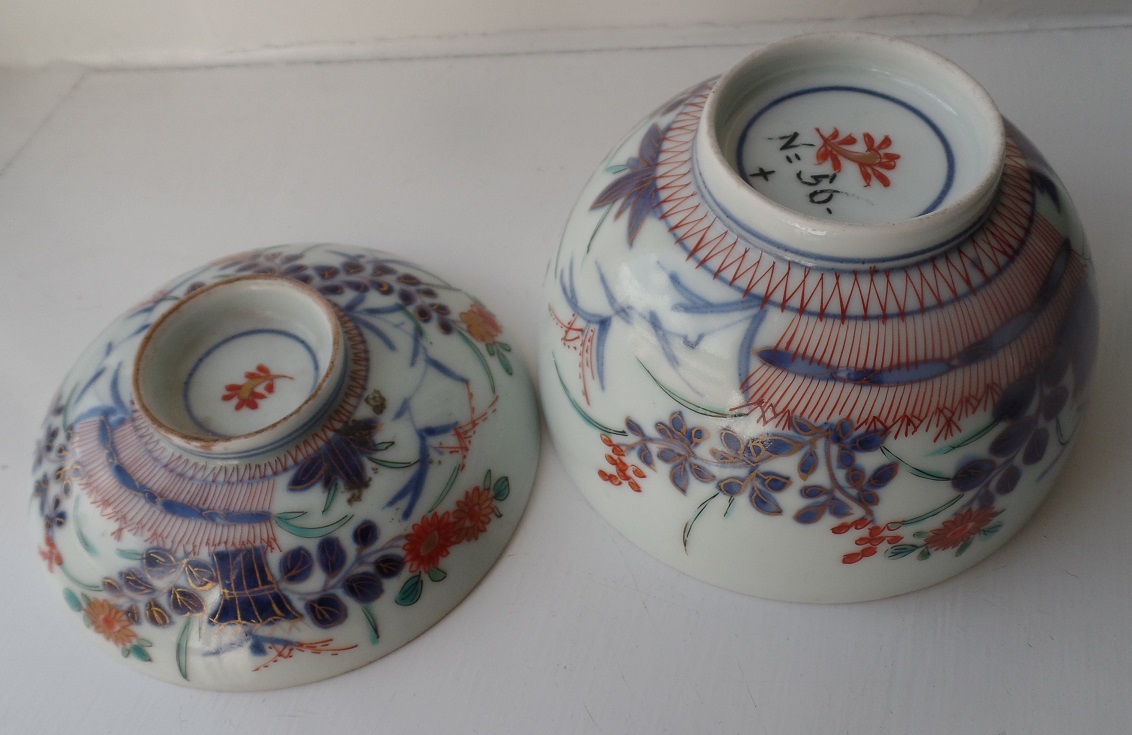 A similar shaped, sized and decorated covered bowl incised with the Johanneum mark 'N=56' and signum '+' proving it was once part of the collection of Augustus the Strong. (from an English private collection this covered bowl is not included in this sale /offer).

Condition: Firing flaws to the base and inner footring. 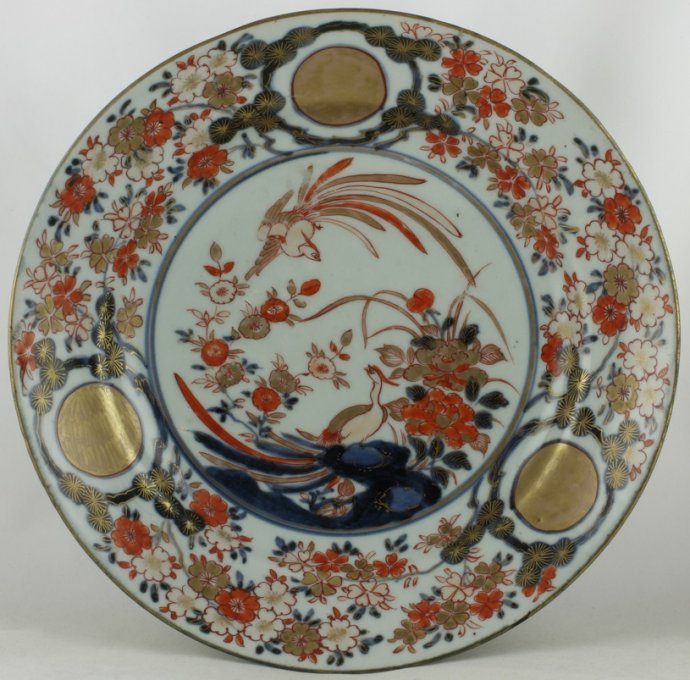 Dish on footring, flat rim. On the base four spur-marks in a Y-pattern. Imari, decorated in underglaze blue, iron-red and gold with a phoenix or pheasant perched on rockwork looking up to another phoenix or pheasant in flight. Various flowering plants originate from the rockwork, On the sides three pine trees each enclosing a large golden roundel. The pine trees are flanked by blossoming prunus and cherry trees. On the reverse three widespread flowering cherry blossom sprays. On the base a rectangular paper label with the handwritten letter 'M' in blue ink.

For a smaller but identically shaped and decorated dish, please see:

Condition: Two firing flaws to the rim, caused by the firing process. 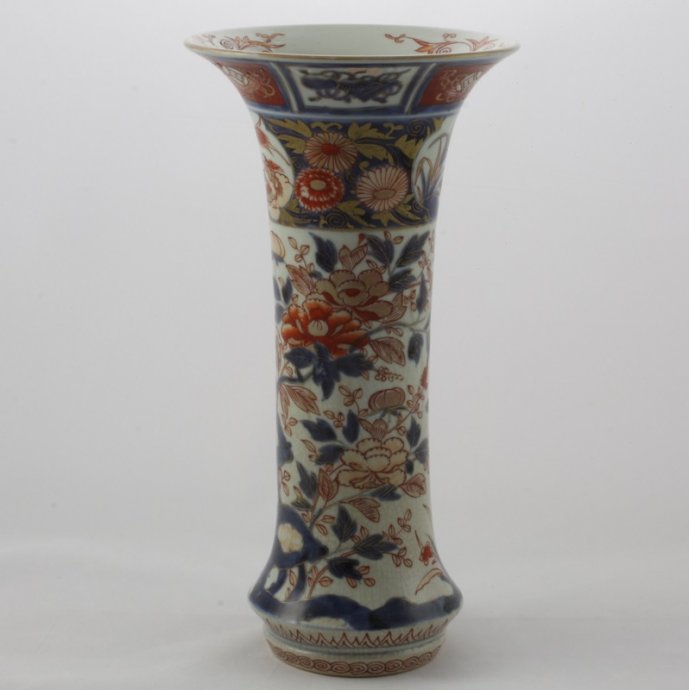 Large beaker vase on footring, waisted cylindrical shape spreading to the rim, a takefushi-shaped foot. Imari decorated in underglaze blue, iron-red and gold with two groups of pierced rockwork with flowering peony and chrysanthemum plants. Round the neck two panels reserved on a dark blue ground filled with flowering plants and birds. The panels are flanked by three chrysanthemum flower heads on a dark blue ground with leafy scrolls in gold. Round the rim a border with panels filled with antiquities in iron-red alternating with antiquities in underglaze blue. Just above the foot a border with upturned spiky lotus leaves and round the foot a spiral border. On the inside two wide spread flower sprays with leafy scrolls.

This large beaker vase was once part of a garniture which mostly consisted of three covered oviform-shaped jars and two cylindrical beaker vases with spreading mouths, all with the same decoration, They were very popular in The Netherlands and elsewhere in Europe, where they were used as decorative items in the interior. (Jörg 2003/1, p.259)

Condition: Two unglazed spots on the rim and fine crazing to the glaze. 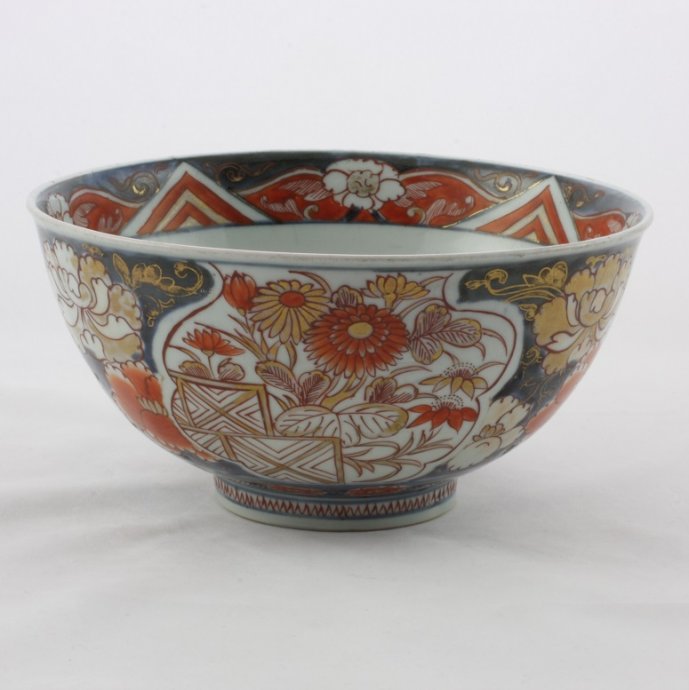 For an identically decorated écuelle with cover, please see: 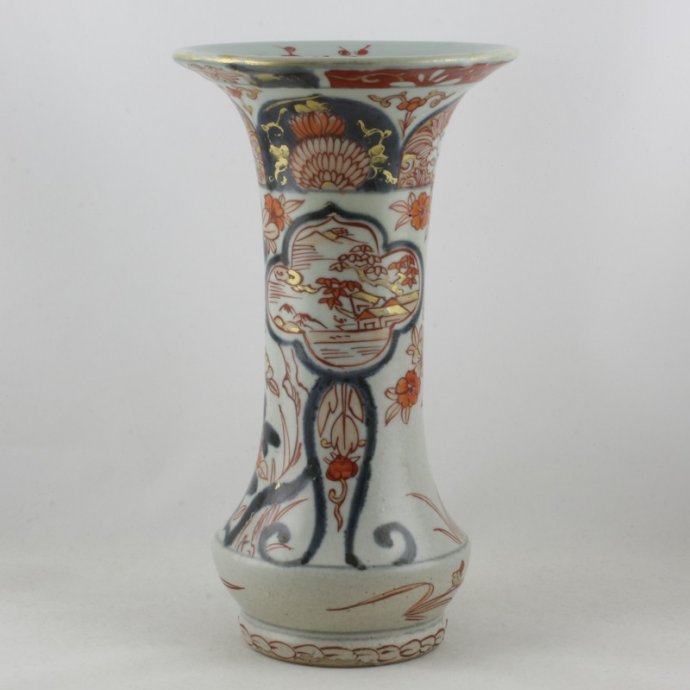 Beaker vase on footring, waisted cylindrical shape spreading to the rim, a takefushi-shaped foot. Imari decorated in underglaze blue, iron-red and gold with around the foot a spiral-pattern border and just above the foot two widespread flowering irises sprays. On the body flowering peony, pine, cherry and iris plants with a reserve filled with a river scape. Round the neck an upturned leaf-shaped border filled with flowering peony and leafy scrolls on a gold ground alternating with chrysanthemum flower heads with leafy scrolls in gold on an underglaze-blue ground, above and in between each panel a floret between scrolls. Round the rim two panels reserved on a dark blue ground filled with a flower head and leafy scrolls in gold alternating with panels with half flowerheads and leafy scrolls on an iron-red ground. On the inside two widespread flower sprays with leafy scrolls.

This beaker vase was once part of a garniture which mostly consisted of three covered oviform-shaped jars and two cylindrical beaker vases with spreading mouths, all with the same decoration, They were very popular in The Netherlands and elsewhere in Europe, where they were used as decorative items in the interior. (Jörg 2003/1, p.259)

Condition: Some unglazed firing flaw spots and some fine crazing to the glaze.

Oviform ewer on footring, Tall neck, the mouth with a pinched spout. Curved handle which is not pierced. Imari, decorated in underglaze blue, iron-red and gold with two panels filled with flowering chrysanthemum and irises growing from behind a fence alternating with flower heads and foliate scrolls in iron-red and gold reserved on a dark blue ground. Round the footing a pointed leaves-pattern border. Round the shoulder a fence alternating with a flower head and leafy scrolls. On the handle a floret between scrolls.

The shape of this ewer is common in the export assortment, but an unusual feature is that the handle is not pierced which is nearly always the case with such ewers.

Condition: Some firing flaws to the rim. 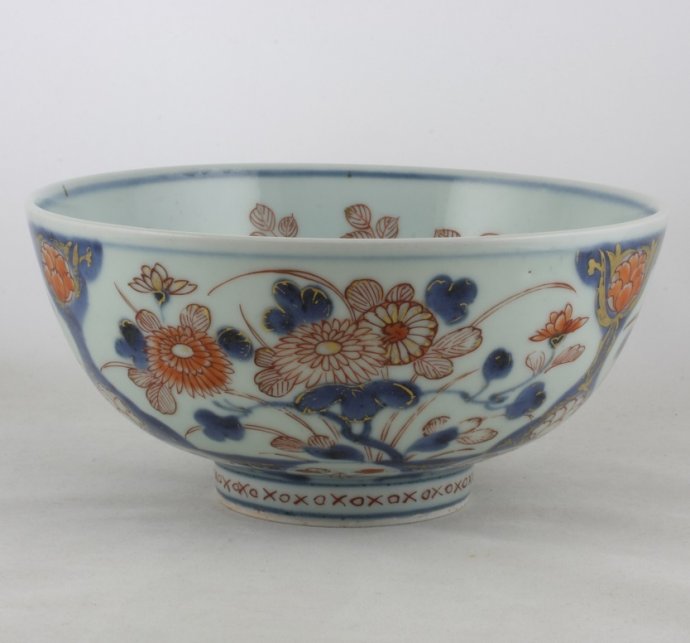 Small bowl on footring, steep sides and straight rim. Imari decorated in underglaze blue, iron-red and gold with on the outside irises, reeds and three zig-zag plank bridges (yatsuhashi), On the bottom a single flower spray in a single concentric band.

Impey illustrates an identically decorated coffee pot and states that an identical example is in the collection or Oriental ceramics in the Groninger Museum, Groningen. (Impey 2002, p.206)