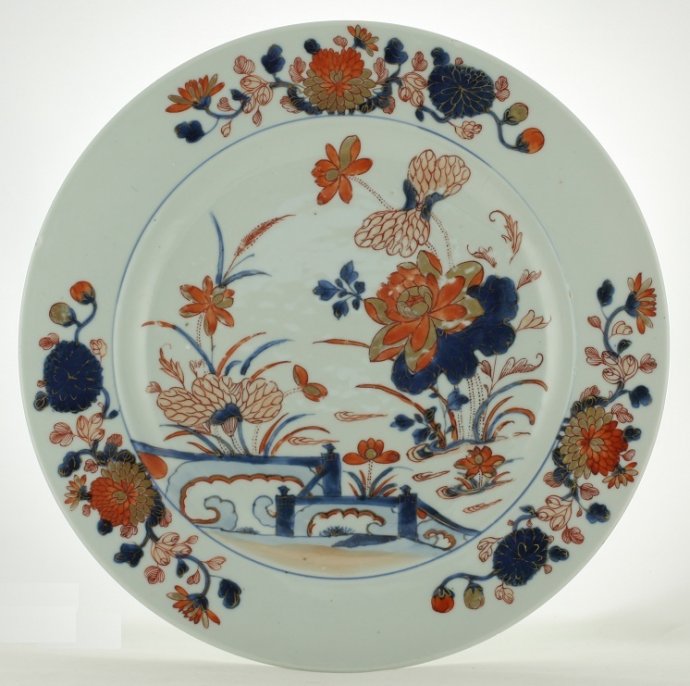 Large dish on footring, flat rim. Chinese Imari, decorated in underglaze blue, overglaze iron-red and gold with a lotus issuing from a pond beside a garden fence, on the rim three chrysanthemum flower sprays. The reverse is undecorated. 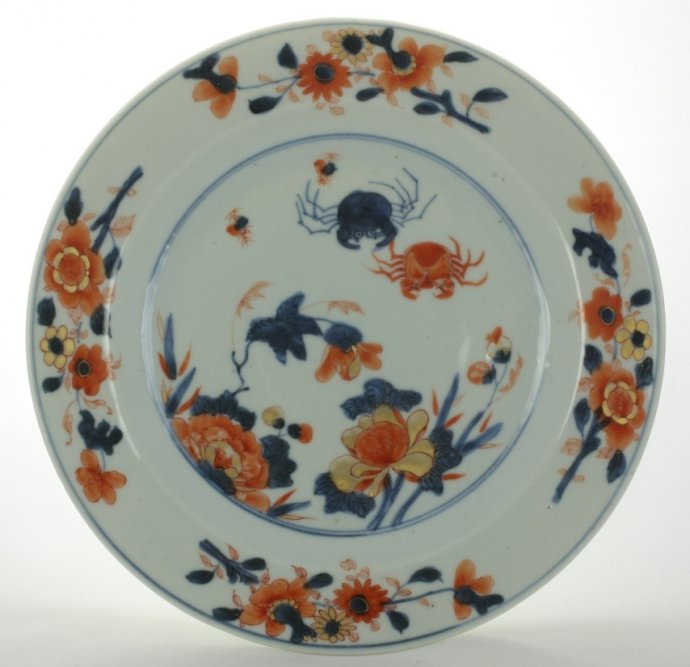 While the crab (xie), a pun for harmony, is symbolic of achieving success in passing the civil service examination, two crabs with a reed make up a rebus conveying the wish, May you pass high on the civil service examination. The peony, known in China as the "king of flowers", is among the most popular Chinese botanical motifs and is widely used to symbolize holding high rank, official position or social status. Its presence reinforces the notion conveyed by the crabs once one passes the exam, one becomes a high official and is assured a good income. (Sargent 2012, p.184)

Condition: A short hairline and two very tiny glaze fleabites to the rim. 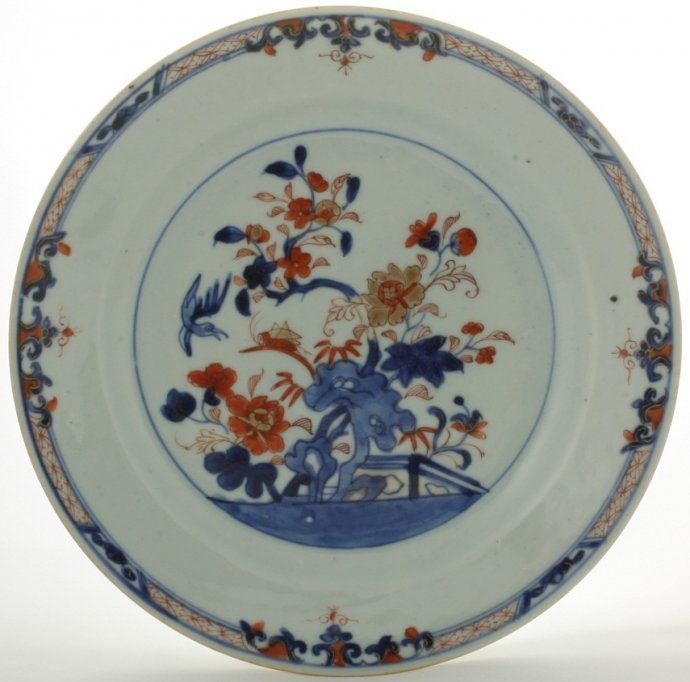 Dish on footring, flattened rim and a glazed base. Chinese Imari, decorated in underglaze blue, overglaze iron-red and gold with a bird in flight and a grasshopper sitting on a branch of a flowering peony tree growing from pierced rockwork near a fence. On the rim a trellis-pattern border with four cartouches filled with a single flowering peony. The reverse is undecorated. 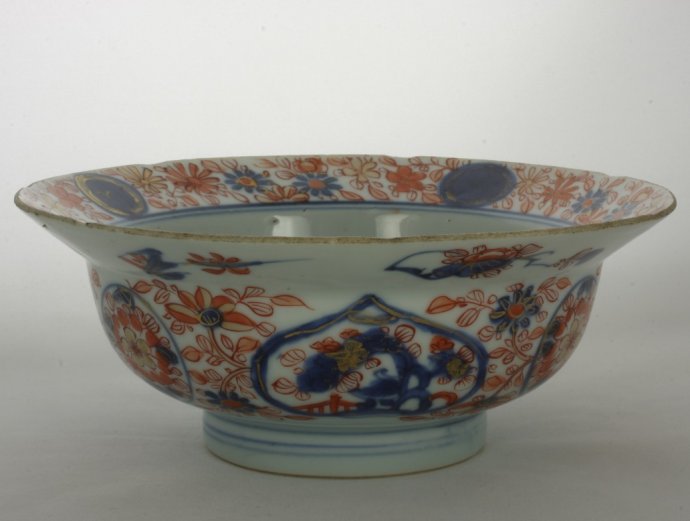 Bowl or klapmuts on footring. Chinese Imari, decorated in underglaze blue, overglaze iron-red and gold. On the outside six medallions, three filled with a pagoda near a fence under a tree, the other three are filled with a flowering chrysanthemum, in between the medallions flowering chrysanthemum branches. On the rim flower sprays. On the bottom, a flower basket filled with a flowering plant on a fenced terrace. The are undecorated and on the rim four flower heads in underglaze blue decorated in gold reserved on a leafy flower head ground.

Bowls of this shape with a flat rim are traditionally called klapmuts in Dutch, comparing the shape with a cap with flaps. Rinaldi states that they were specially developed to meet a demand from European customers, who wanted to be able to rest their spoons in the bowl without damaging the edge. (Rinaldi 1989, p.118) In fact the form was already well-known, not as shallow bowls, but as late 15th-early 16th century large and fairly deep dishes in underglaze blue or as Song and early Ming celadon saucers and dishes. The klapmuts is just another variety in the gradual development of this type. (Jörg & Van Campen 1997, p.60)

Condition: Worn of glaze to the rim. 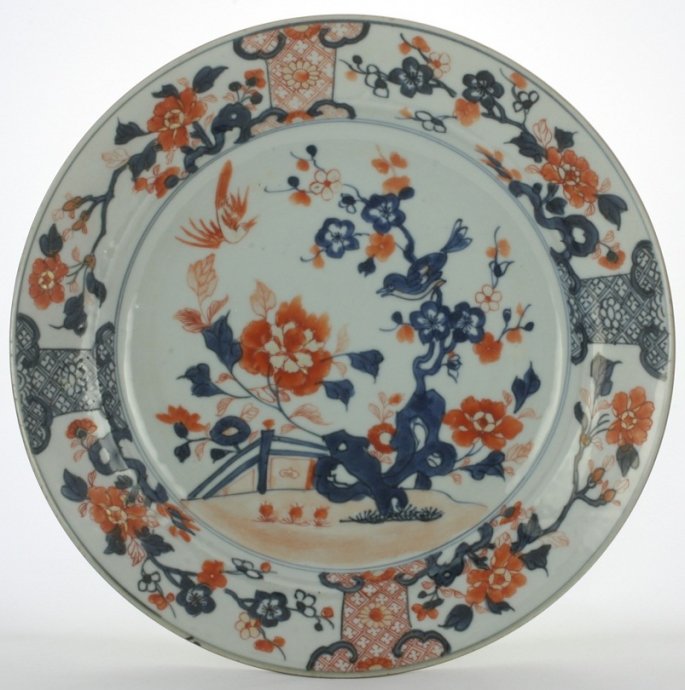 Condition: A glaze chip to the reverse rim. 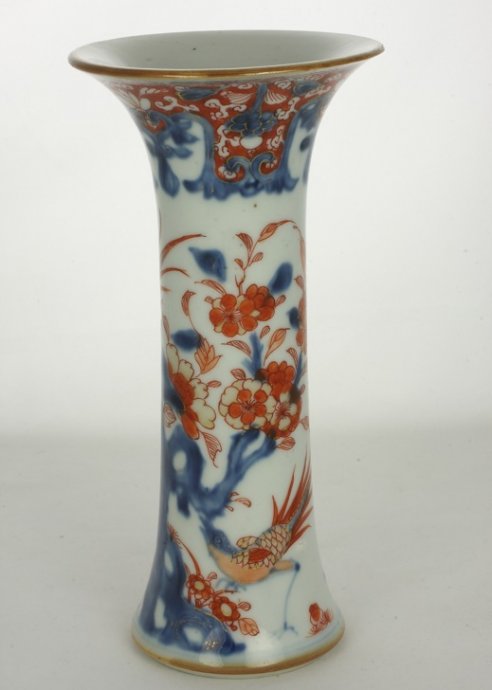 Beaker vase on footring of waisted cylindrical shape, a spreading lower part and a flaring underglaze brown-edged rim (jia mangkou). Chinese Imari, decorated in underglaze blue, overglaze iron-red and gold with a flowering chrysanthemum plant growing from pierced rockwork with two pheasants one on the ground and one on top of the pierced rockwork.

The pheasant on a rock is a very popular motif on export porcelain and frequently appears on enamelled and underglaze blue Kangxi wares. (Jörg & Van Campen 1997, p.157) According to Williams, in the Chinese bureaucratic hierarchy officials of the second grade had a gold pheasant embroidered on their court robes, those of the fifth grade a silver pheasant. The bird was represented as standing on a rock, looking towards the sun, the imperial symbol of authority. (Williams 1976, pp.322-323)

This beaker vase was once part of a garniture which mostly consisted of three covered oviform-shaped jars and two cylindrical beaker vase with spreading mouths, all with the same decoration, They were very popular in The Netherlands and elsewhere in Europe, where they were used as decorative items in the interior.

Condition: A tiny restored chip to the rim and a firing fault to the rim. 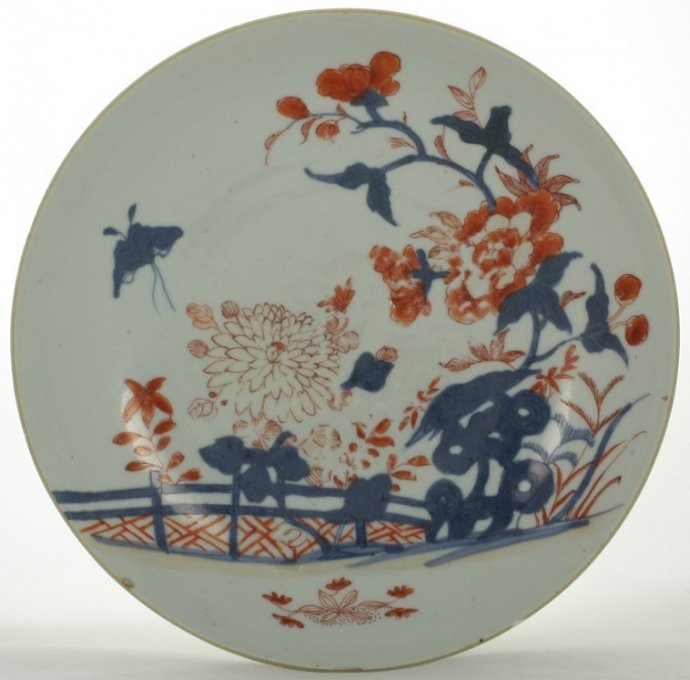 Dish on footring, straight rim. Chinese Imari, decorated in underglaze blue, overglaze iron-red and gold with a flowering peony and chrysanthemum tree in front of a fence and a single butterfly in flight. The reverse is undecorated.

The original Japanese design on this dish was copied by the Chinese porcelain decorator, for a pair of Japanese dishes with similar decoration, please see:

Condition: Some wear to the decoration, a firing fault and a chip to the rim. 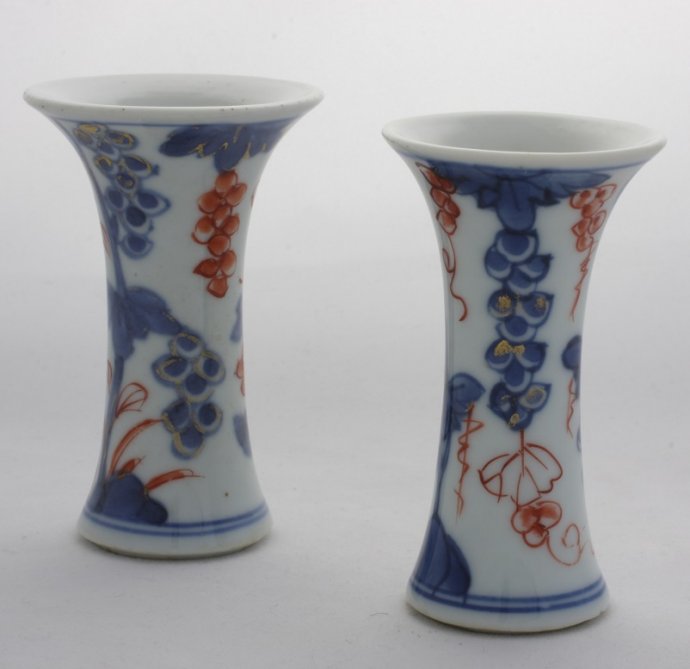 A pair of miniature beaker vases on footrings. Chinese Imari, decorated in underglaze blue, overglaze iron-red and gold with a continuous decoration of a flowering wisteria growing from rocks.

Beaker vases like these would most likely have been part of a miniature garniture consisting of three covered jars and two beaker vases. Porcelain miniatures were popular in The Netherlands, where they were used to furnish doll's houses, which were not children's playthings but professionally furnished replicas of townhouses. In general, miniatures were included in groups of decorative porcelain placed on shelves, brackets and consoles in the Dutch interior, or in the porcelain rooms of the grand houses, such as those still in Pommersfelden and Charlottenburg. Germany. (Jörg 2003/1, cat. 238) 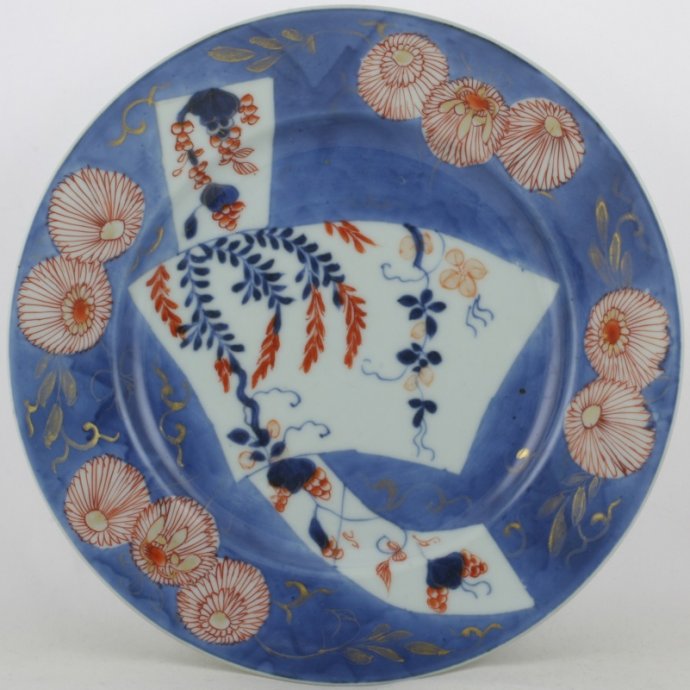 Dish on footring, flat rim. Chinese Imari, decorated in underglaze blue, overglaze iron-red and gold with flowering plants in shaped panels on an underglaze blue ground with foliate and floral scrolls in gold. On the rim four groups with chrysanthemum flower heads. The reverse is undecorated.

Chinese Imari was first introduced in the early years of the 18th century as an imitation of Japanese 'Imari'. It was based on a simpler form and was essentially an export type. The Chinese did not imitate the Japanese Imari models but copied the designs like kiku (chrysanthemum), roundels and half-roundels, fan-shaped panels, partly unrolled bamboo blinds and rather pronounced foliate and floral scrolls. The Japanese Imari colour combination was also copied, the Chinese Imari colour palette consisted of iron-red enamel and gold in combination with underglaze blue. Sometimes other colours, and even certain enamels of the famille verte such as green and black, were sparingly introduced and used in a subtle way. Chinese Imari remained popular into the 1720 after which it became overshadowed by opaque enamels. (Howard & Ayers 1978, vol. 1, p.137, Jörg & Van Campen 1997, p.199, Sargent 2012, pp.183-188)

On this Chinese Imari dish the shaped panels filled with flowering plants and the pronounced foliate and floral scrolls with chrysanthemum flower heads are clearly Japanese design elements copied by the Chinese who in this way tried to appeal to their newly re-established European market.

Condition: A shallow glaze rough spot to the rim and some shallow rough spots to the footring. 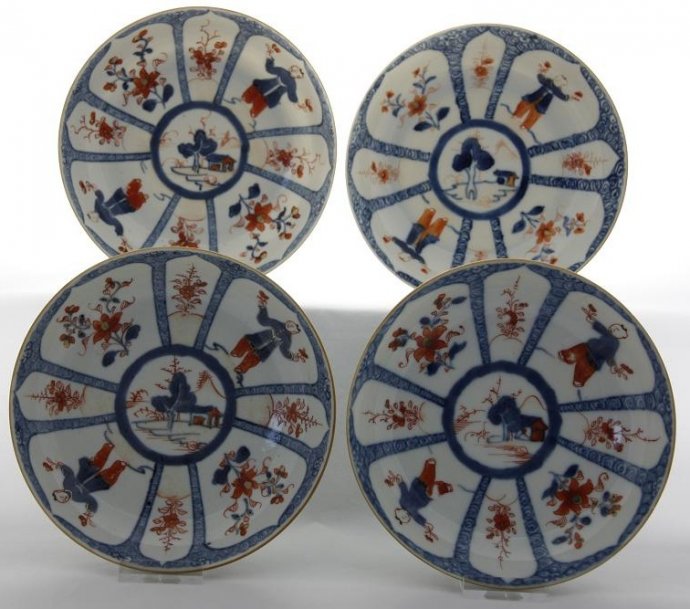 Four dishes on footrings, straight rims. Chinese Imari, decorated in underglaze blue, overglaze iron-red and gold with riverscape in a central roundel. On the sides and rim four small and four large panels, of the large panes two are filled a little dancing boy holding a flower in each hand, the other two are filled with a flowering plant. The smaller panels are filled with a flowering plant. The reverses are undecorated.

In the Netherlands these little dancing boys were named zotjes or little fools.

Condition: Two are perfect the other two dishes each have a small hairline. 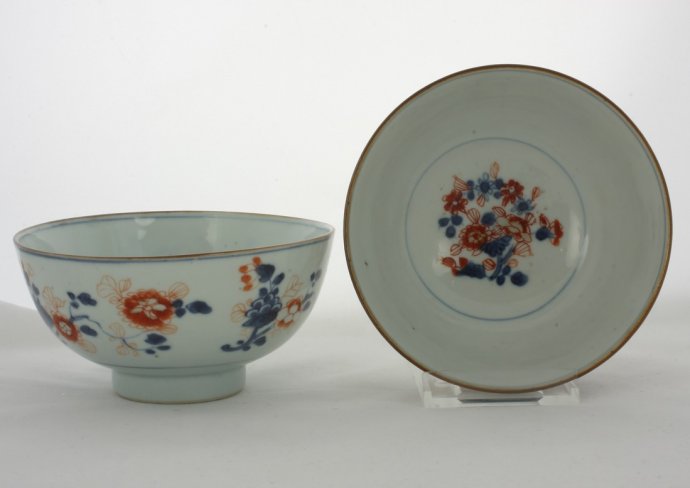